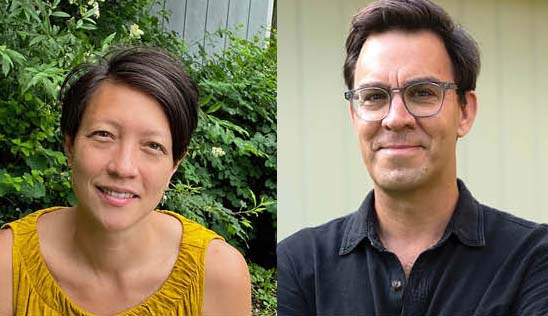 MIDDLEBURY — An Addison Central School District board election firmly rooted in the debate over the future of small rural schools culminated in wins on Tuesday for two outspoken advocates for keeping all of the ACSD’s elementary schools open.

In the other contested race, Jamie McCallum bested incumbent (and ACSD board Chair) Mary Cullinane, 1,389-845, to serve three years as the Weybridge representative on the board, which oversees preK-12 education for children in the seven member towns.

Doria, a member of Save Our Schools (SOS), already serves on the Ripton School District board, which is overseeing the town’s transition from ACSD member to an independent school district. Ripton has navigated all the statutory hurdles to become independent, effective July 1, 2023. So barring Ripton’s re-entry into the ACSD, Doria’s term on the district board will last 16 months, instead of three years.

McCallum, a first-time candidate for local office, is also an advocate for preserving rural schools. While the ACSD board has no plan on the table to close any of the district’s seven elementary schools, a solid majority of the panel has stated that declining enrollment and rising education costs are likely to soon drive decisions on how many school buildings the district will be able to afford without overburdening local taxpayers.

All four candidates ran active campaigns that included multiple support messages that appeared in the Addison Independent and on Front Porch Forum during the weeks preceding Town Meeting Day.

Doria and McCallum were thankful for their wins.

Doria believes her ample margin of victory was emblematic of voters’ sense that schools are “struggling with a crisis.”

“Our at-large community showed up yesterday with the power of their vote, and my reaction is to take a beat, hear the missive, and stand steadfast in my commitment to follow through with the promises to grow trust, rein in the distance between the power at the board level and the voices in the towns, and establish honest and direct avenues of access to the board,” she said in an email to the Independent.

McCallum infused his response with some humor after what was a very long night. The election results weren’t tabulated until around midnight, as election workers worked hard to process many hundreds of ballots.

“I feel grateful that so many people supported us,” McCallum said. “It means our message resonated far and wide, and I hope to carry that momentum with me as a productive board member. Also, I’m very much looking forward to not seeing my name on yard signs.”

McCallum said the next three years will, among other things, bring the district’s many constituencies together after a long pandemic to navigate some big challenges — including budgeting and addressing student unrest at a Middlebury Union Middle School that this year added sixth graders.

“It’s clear there are stark divides about how to approach the future of our district,” he said. “Building the trust to move forward as a more unified group might take time, so it’s important to start now. We need to assess what went wrong with the MUMS move of sixth-graders, and be more proactive in resolving those issues. That probably means staffing with teachers at the appropriate level. (Also), we need to address the root cause of our budget woes, which are driven by rising healthcare costs. As it stands, students, who need quality schools, and teachers, who need quality healthcare, are essentially competing for scarce resources. This is unfair and unsustainable, and requires that we think creatively about how to disentangle healthcare costs from the education budget.”

Doria acknowledged her service on both the RSD and ACSD boards could pose potential conflicts of interest; the two panels certainly differ, for example, on policies related to school closures and consolidation.

She promised transparency and recusals on votes in which there might be a conflict of interest.

Looking ahead, Doria emphasized delivering the best possible services to all children.

“There are many factors at play that are putting strain on our current systems,” she said. “From the accumulation of pandemic trauma to staffing, to the state-level approach to funding healthcare, I believe that the board needs to reflect on the systems we control and/or are part of to ensure that they are indeed fulfilling their obligations to serve our students. If they aren’t, adjustments are necessary.

“Coming together will be a challenge, given the lingering history, but I hope doable if we all agree to begin to heal together,” Doria added.

McCallum and Doria acknowledged the Save Our School dimension to the election, but believe it went deeper than that.

“This election and our collective voices have clarified the significance of rural schools and brought their importance in the health of our district to the forefront in a way that can’t be ignored,” Doria said.

“I see it as a referendum on the process by which the board makes decisions, and the extent to which important stakeholders are actually heard or kept out of the process,” said McCallum, who has a child at Weybridge Elementary. “The consolidation question falls under this umbrella but doesn’t fully define it. It’s important that we begin to move away from thinking about rural schools versus Middlebury. Instead, we need to re-examine the system as more complex. I believe voters chose us because we plan to broaden the approach to improving our schools.”

Meanwhile, McGlashan was humble in defeat. She thanked her supporters and wished Doria well in managing her challenging, simultaneous service on two school boards.

“I hope she can honor her pledge to serve on behalf of all students in the district while simultaneously serving on the Ripton School Board,” she said.

Looking back on the election, McGlashan said, “Naturally I’m sad that my campaign for equity above all didn’t prevail. I’m not a politician. I’m an educator and a school board member, so perhaps I should have heeded Emily Dickinson’s words, ‘Tell all the truth but tell it slant … as lightening to the children eased with explanation kind, the truth must dazzle gradually, or every man be blind.’”

She credited McCallum and Doria for getting out early with their message, and running a strong campaign, with backing and support from SOS.

In retrospect, McGlashan said she wasn’t as successful as she’d hoped in conveying her message “about working across the district to achieve equitable outcomes.”

McGlashan rejected what she believes was a false campaign narrative that the current ACSD board “lacked transparency.”

“Our facilities master planning process was so transparent that single documents or discussions were being reported out as decisions, when in fact they were merely pieces of information being sorted out in a long, deliberate and complex planning process,” she said.

“I have no problem with stakeholders challenging our work. I do take it personally when they challenge our integrity,” she added. “I’m sorry voters didn’t see it that way.”

Cullinane offered the following post-election comment: “I am so grateful for the opportunity to serve the students and educators of ACSD these past years. I congratulate the new members of the board and I wish all board members great success in the work ahead.”