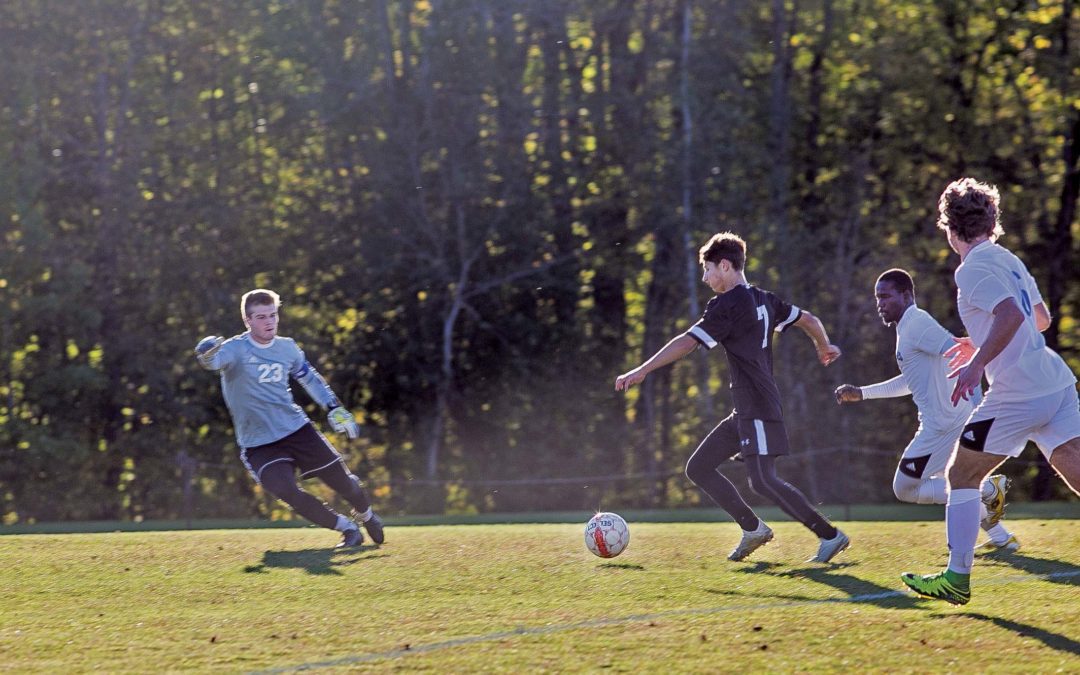 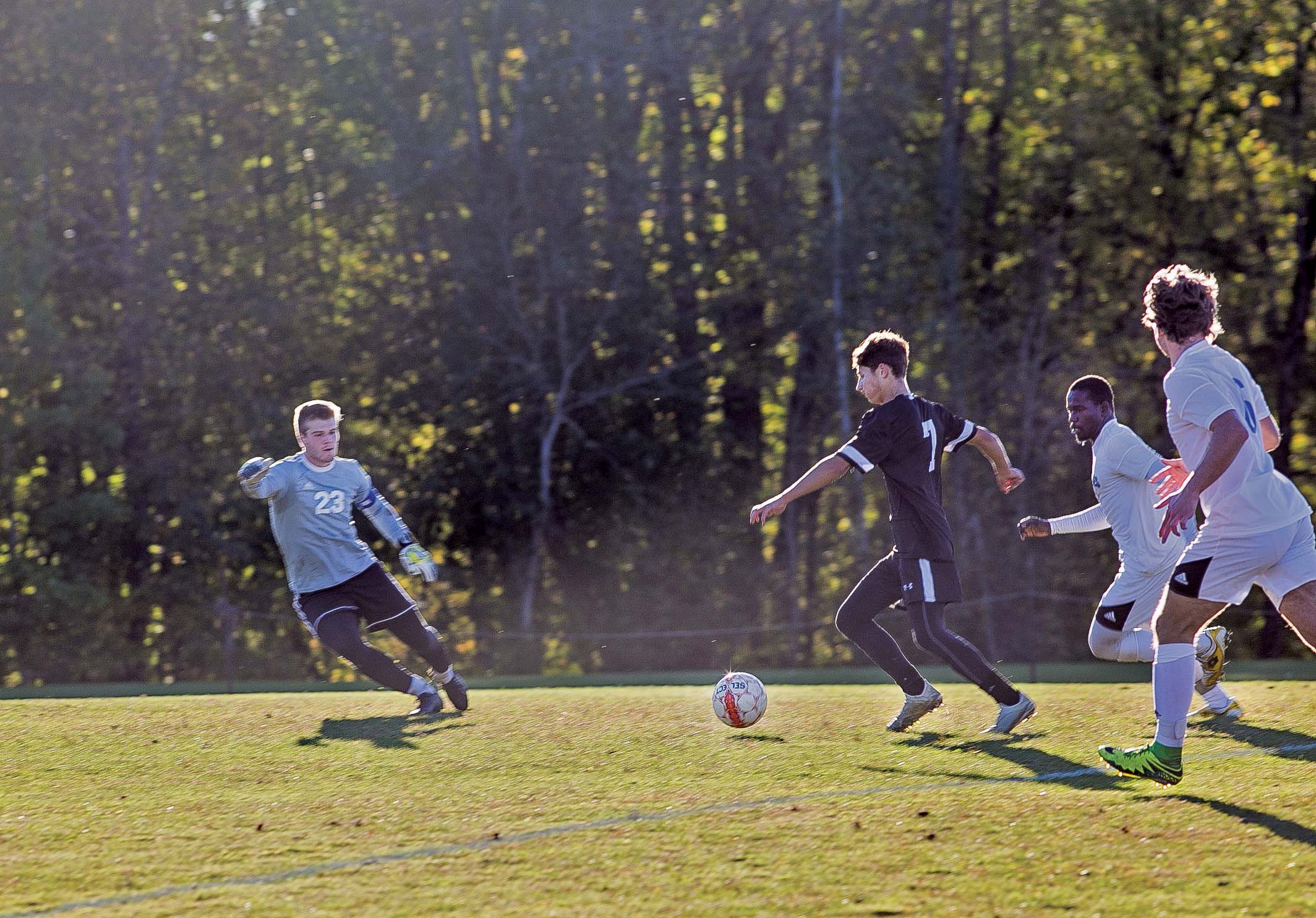 MIDDLEBURY — For the third straight game, the Middlebury Union High School boys’ soccer team found itself tied in the late going, this time at 0-0 in double overtime on Saturday against their scrappy neighbors from Vergennes.
The 8-2 Tigers, winners of five straight, found the same answer they had in their 1-0 win over visiting Milton on Sept. 27 and their 2-1 victory over Mount Abraham three days earlier.
That would be senior forward Eben Jackson, who scored the game-winner in both those games, in double overtime vs. Milton and with five minutes left in regulation vs. the Eagles.
This time forward Alex Bleich fed Jackson. The Tigers won the ball at midfield and worked the ball to Bleich in the center of the field, maybe 32 or 33 yards out from the Commodore goal. The Commodore backs made a fatal move toward him, a rare miscue on a day they had had allowed just 11 shots on goalie Jeff Stearns. Jackson cut from right to left into the box, open at last after being carefully shadowed for almost 99 minutes.
“I saw that their other defenders had stepped up to him, and it had left a big gap,” Jackson said.
Bleich led Jackson perfectly across the top of the box, and Jackson turned toward the VUHS goal, with the ball on his strong foot, his left. Stearns came out to cut down the angles, but had no chance as Jackson laced the 15-yard game-winner back into the lower right corner — just 80 seconds before the Commodores could have earned a tie.
After the game, VUHS Coach Kevin Hayes had nothing but praise for his defense of Tucker Stearns, Aidan Gebo, Xander DeBlois and Robbie Bicknell — “The back line did great all game, just phenomenal.” But, he added, players like Jackson have that knack.
“We know he is the danger man,” Hayes said.
That play capped a back-and-forth game in which the Tigers compiled a modest statistical advantage — 16-13 in shots and 9-6 in corners — that fairly represents a their slight edge in possession and play.
But the Commodores made life difficult for the Tigers, according to MUHS Coach Reeves Livesay.
“They defended real well. We didn’t get too many real dangerous looks, and I thought they did a real good job going forward, too,” Livesay said.
The 3-6-1 Commodores have been playing better, with two wins and a tie with a 6-2-2 Mount Abe team in their past three games. Those had come since Hayes moved Jeff Stearns to goal and defensive middie Jon Willis to striker to team up with Josias Salomao in a new 4-2-2 formation.
“It’s been working. We’re scoring goals — normally we’re scoring goals — and playing tough defense. The guys are stepping up to the challenge,” Hayes said.
On Saturday the Commodores quickly served notice they had come to play, forcing two corner kicks and making Tiger goalie Owen Lawton come up with stops on Salomao and middie Jarret Muzzy in the first two minutes. Lawton made eight saves in all.
“Owen played a great game,” Livesay said. “He made a couple of really difficult saves look fairly easy.”
The Tigers regrouped, and Stearns made his best save of the game four minutes in, kicking away an Owen Palcsik breakaway bid after Jackson sent him in alone. Later in the half VUHS midfielder Kai Williams cleared a rebound away from his Tiger counterpart Henry Carpenter, and Tucker Stearns blocked a dangerous Jackson shot.
Defense and goaltending ruled the second half, too. Lawton tipped a Willis blast over the crossbar in the 19th minute, and Jeff Stearns twice snared headers from Tiger middies — from Oliver Poduschnick eight minutes in and Oliver Anderson in the 38th minute. With five minutes to go Muzzy, cutting in from the right, headed just high on a strong Willis serve from the left sideline.
But ultimately the Tiger defense of Spencer Doran and Eddie Hodde in the middle and Devon Kearns and Hunter Munteanu on the flanks in front of Lawton produced its fourth shutout in five games.
“Our back four are playing really well, and they are at times getting some really good help from the midfield defending, which we needed today,” Livesay said. “They’re certainly gelling as a unit.”
Livesay and Jackson agreed the Tigers for the most part have steadily improved their possession and ball movement.
“We’ve settled in to passing the ball around the midfield and switching it a lot quicker than we were earlier in the season,” Jackson said. “That’s opened up a lot of space for us to play in.”
Livesay said the Tigers are pointed in the right direction with four games left in the regular season.
“We’re at a good spot. And I still think what’s nice about the team is they’re really driven, and we’re still improving at this point. So we have a few more games to hopefully get in our top form,” he said.
Hayes said the Commodores will have to be content with the knowledge they played well and are on an upward swing.
“I’m proud of them,” he said. “We would have loved to get the three points for a tie, but the boys are improving. They’re getting better, and I’m pretty thankful for that.”
Andy Kirkaldy may be reached at andyk@addisonindependent.com.