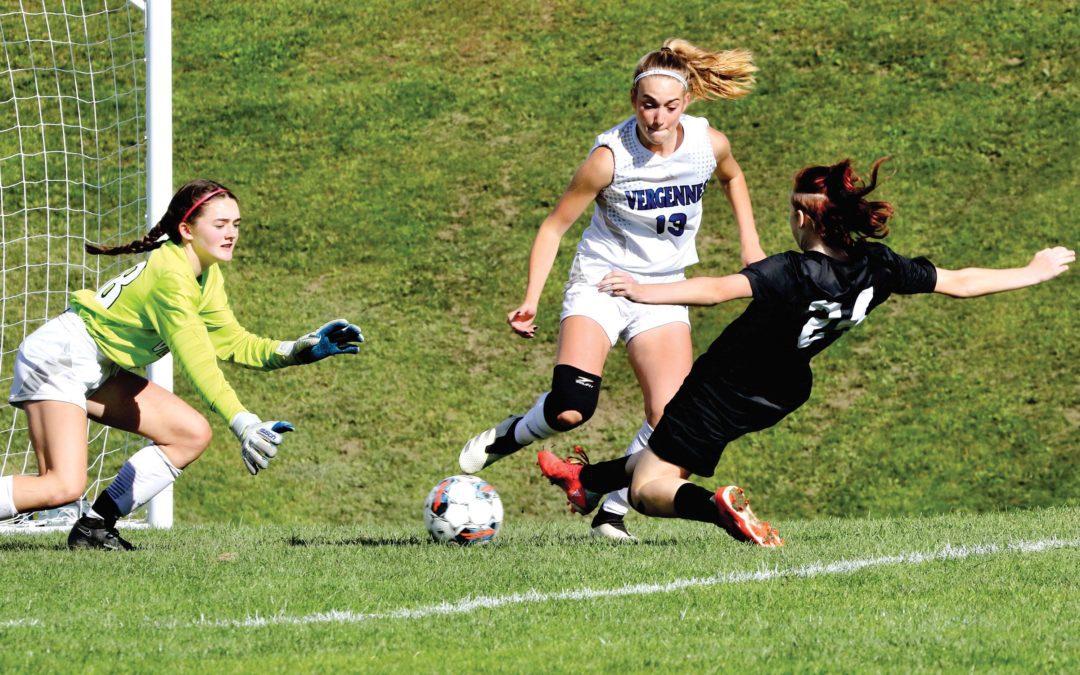 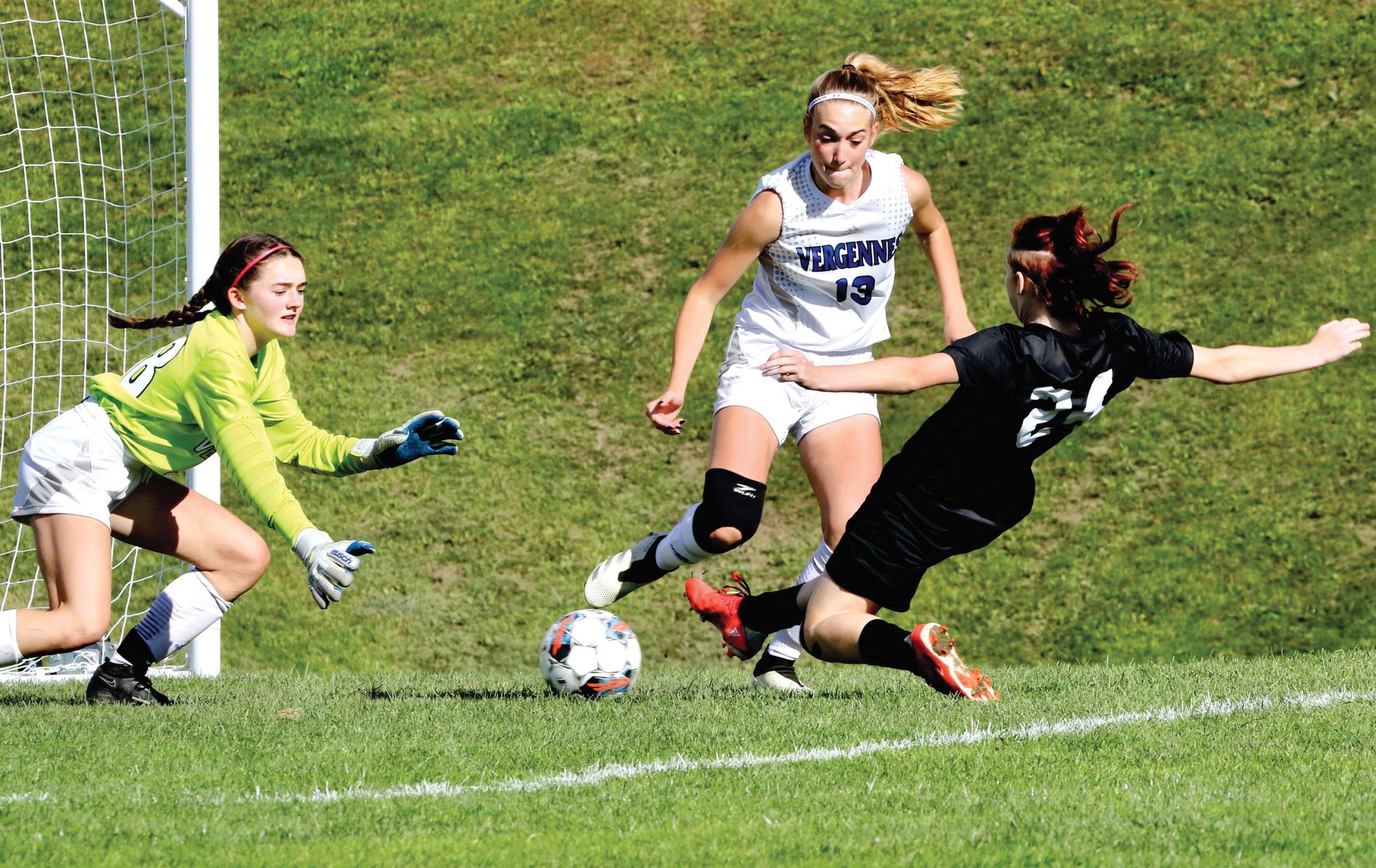 TIGER FORWARD MAX Carpenter right-foots a short, low shot home in the first half of Saturday’s home game to tie the score against visiting VUHS. The Tigers won on a late Lia Robinson strike. Independent photo/Steve James
By Andy Kirkaldy

MIDDLEBURY — Soccer games often come down to one moment where everything clicks.

That moment in Saturday’s back-and-forth game between host Middlebury Union girls and Vergennes arrived with 1:11 left in the second half. 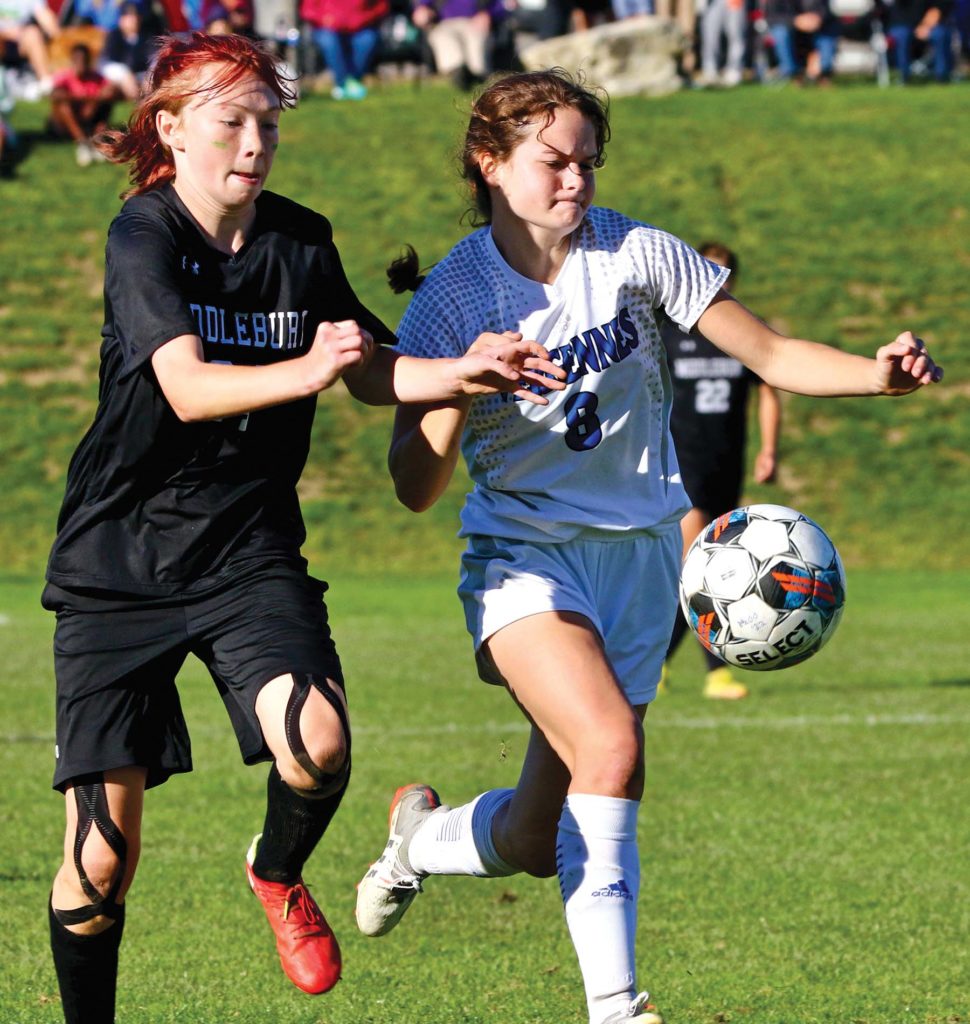 The Commodores had dominated the first 22 minutes of the half with six shots but had been unable to snap the 1-1 tie that stood since the teams traded first-half scores about a minute apart.

But then the Tigers launched five unanswered shots in the final 18 minutes. The fifth went in, courtesy of two MUHS veterans.

Senior midfielder Lia Robinson cut toward the center perimeter of the VUHS box, and senior Tiger striker Lily Lapiner led her perfectly into the penalty area.

VUHS freshman goalie Quincy Sabick did the right thing, coming off her line to cut down the shooting angle, but Robinson ripped a right-footed shot from about 15 yards that nestled inside the left post, and the Tigers had earned a hard-fought victory.

The young Tigers had lost five straight against tough competition after a 2-1 start, and had not scored in those losses. The even younger Commodores, who start four freshmen, dropped to 1-7-1 despite one of their better efforts.

Tiger assistant Dave Turner, filling in for Coach Reeves Livesay, who missed the game due to illness, was pleased with the Tigers’ offensive play. Junior Max Carpenter finished a Jazmyn Hurley serve in the first half.

“We’ve really been working on trying to get more successful opportunities on goal, and both of our goals were a result of that. So that was a step in the right direction,” Turner said.

Turner was also pleased with the MUHS defense. Junior flank backs Harper Werme and Amelia Quesnel were on duty as usual, while freshman Solstice Binder moved back from midfield to sweeper and versatile forward/midfielder Cadyn Pitner took over as stopper in the absence of ill starters Meredith Horne and Elsa Burrows. Both Binder and Pitner fared well in the new roles. 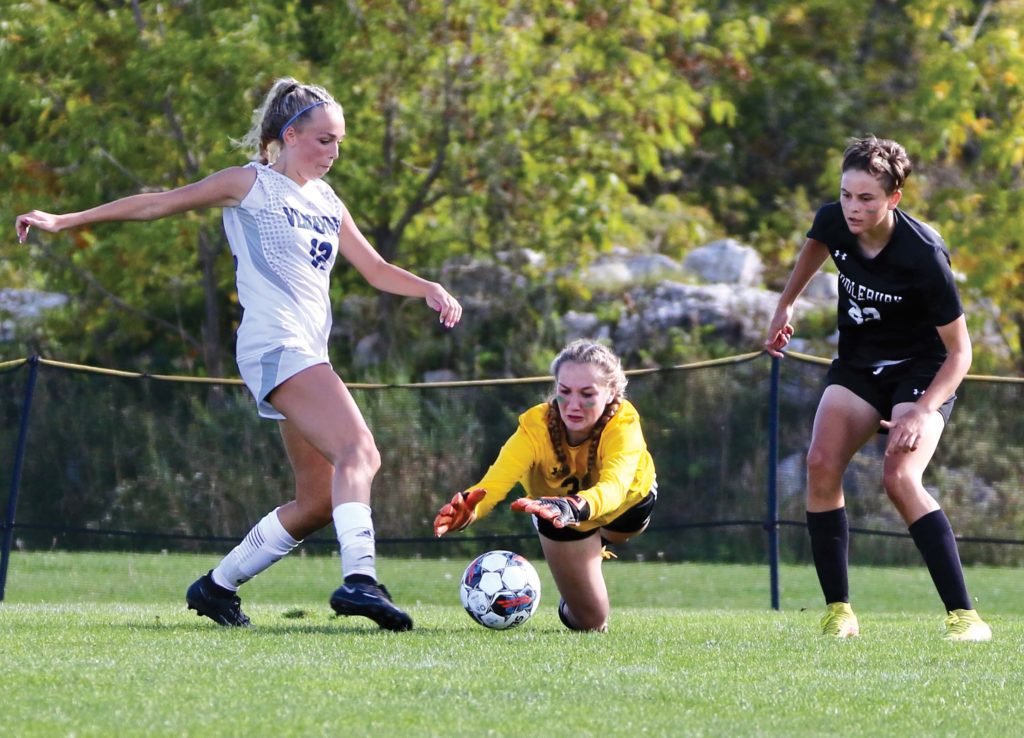 TIGER GOALIE KASSIDY Brown dives on the ball just ahead of charging VUHS striker Ava Francis during her team’s home win over the Commodores on Saturday.
Independent photo/Steve James

“Solstice, it was her first time at center back, and she did a great job,” Turner said.

VUHS Co-Coach Dwight Irish was happy his athletes played well, but disappointed their more cohesive play was not rewarded.

“I can’t get beyond the result, but the first part of the second half, we were more than happy with the way we played,” Irish said.

As well as tactical improvement, Irish thought the Commodores showed more grit after the break.

“We had to get tighter on our marks, and we had to be better at getting first to the ball,” he said. “We had to be more determined.”

The Tigers had the better run of play in the first half. The VUHS back line of freshman Amelia Giroux in the middle and senior Sam Hallock and sophomore Jing Williams on the flanks did well to hold up under the pressure.

VUHS freshman goalie Quincy Sabick also made five of her six saves in the first half. The Tigers launched nine first-half shots to just one for the Commodores.

But that one came from VUHS freshmen striker Ava Francis, and it was a gem. Francis picked up a loose ball out on the left side, touched toward the middle, and unloaded a bomb into the upper right side from about 24 yards, giving Tiger goalie Kassidy Brown no chance at 21:18.

At 20:08 the score was tied. Hurley crossed from deep in the right side, and her low serve found Carpenter about six yards out in front of the net. Carpenter controlled and quickly right-footed a roller back into the right side between Sabick and a lone defender.

Each team had chances before the half. Sabick beat Robinson to a ball in the 33rd minute, Brown pounced on a VUHS through ball a minute later, and with a minute to go Williams cleared out of trouble behind Sabick.

After the break Quesnel broke up a VUHS attack in the first minute and another in the 12th, Francis almost headed an Ashtin Stearns direct kick inside the left post. Binder cleared the ball several times, and in the 14th minute the ball pinged around the Tiger box after the second VUHS corner kick of the half, but the Commodores couldn’t convert. 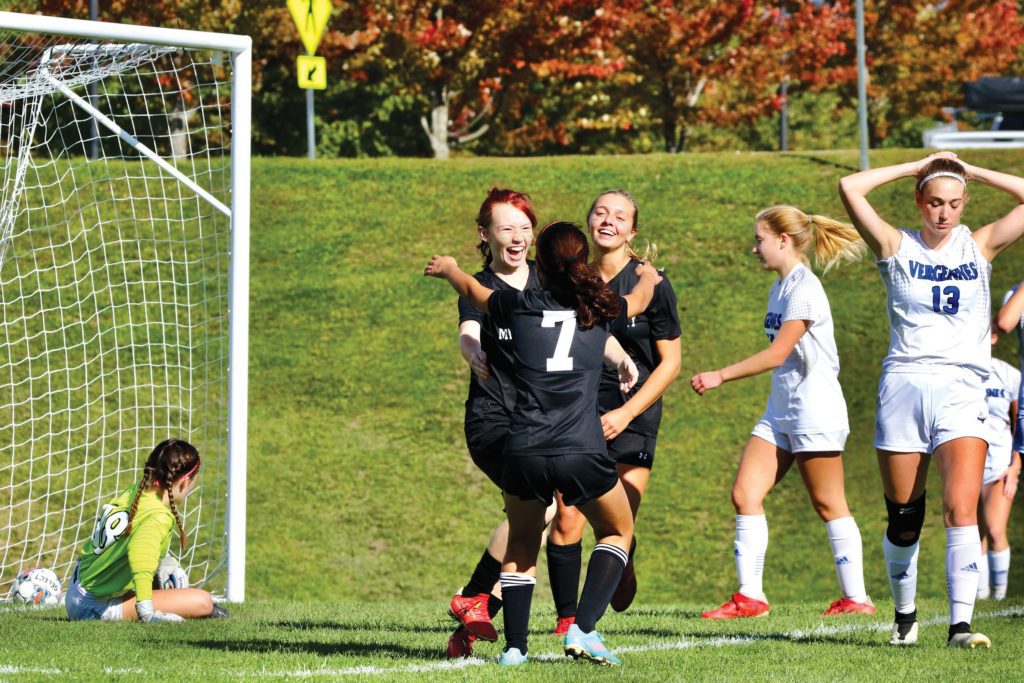 Brown also made all three of her saves in that stretch.

Turner said strong central midfield play, including nice give-and-go work, keyed the VUHS surge, and the Tigers moved their center middies higher up the field up to break up the passing patterns and reassert themselves.

“We had to make some adjustments where we located our players,” Turner said.

The Tiger shots began to pile up, and Sabick kept them at bay by pouncing on a loose ball with three minutes to go. But two minutes later the Tiger seniors combined on the winning moment to send the Commodores home unhappy, but maybe knowing they are on a better trajectory heading into a Tuesday visit from Mount Abraham (see story).

“Wins this year are hard for us to come by,” Irish said. “But I think they’ll know they were right there.”

Likewise, Turner said he believes the Tigers met their goal of steadily improving their play.

“This is definitely a rebuilding year for us. Our goal is just to get better every game. So that helped offensively for us to feel like we were getting better,” he said. “Hopefully we’ll be able to keep building on that.”