Sheriff Newton says he will retire 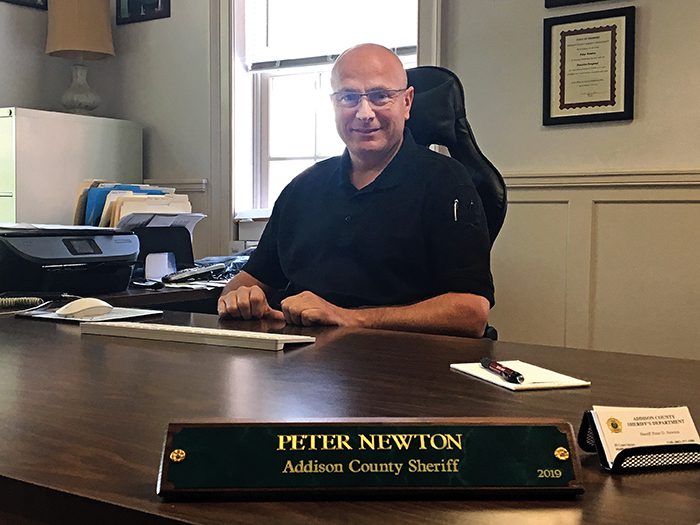 Sheriff Newton says he will retire

MIDDLEBURY — Addison County Sheriff Peter Newton announced in an online video posted Sunday that he will not run for re-election this year and will retire from law enforcement when his term as sheriff ends next February.

Newton said in a 19-minute-long video posted on YouTube that he was very tired of how he was being undermined by some people in the community and it would be better for his mental health if he left law enforcement after 20 years.

The video was publicly viewable until around 9 a.m. Monday, when the video was made private.

It came days after a news story was published by VTDigger.org and the Addison Independent that reported that Vermont State Police were investigating a Feb. 26 incident in which Middlebury police were called to a “domestic disturbance” at Newton’s Middlebury home. Newton explained in the story and in the video that the woman involved in the incident was intoxicated and became upset when he dumped out her alcohol.

In the video Newton faulted at least a half-dozen people by name whom he said leaked the information to the media on the Middlebury police call, and who he claimed were chipping away at his authority by tarnishing his reputation.

In the video, which appeared to be shot from a camera on the dashboard of a car in which he was sitting and drinking a cup of coffee, Newton recounted the instances of post-traumatic stress disorder from which he suffered from his years as a police officer and an ambulance paramedic. He said he was proud of his 20 years in law enforcement but was ready to move on and work in the construction field with his son.

Newton was elected to office in 2018 after long-time Sheriff Don Keeler decided not to run again.

During his more than three years at the helm, Newton has been in a number of news stories. Early on he touted the success of his effort to hire and keep more full-time deputies by offering better benefits. And last year he announced an effort to raise $1.5 million to make the sheriff’s department a place not just for law enforcement but also for social services, under the mantle of the “Addison County Community Support program.”

Newton also was involved in less flattering incidents. In 2020, a report sent by Sheriff Newton to the Vermont attorney general alleged that Vergennes Police Chief George Merkel had mis-assigned hours on a time sheet covering traffic patrols, but the attorney general cleared Merkel. At that time, the Vergennes city manager alleged that Newton was motivated by the sheriff’s department’s loss of traffic contracts to Merkel’s department.

Last summer Newton was involved in a public spat with the town manager of Brandon over the conduct of one of Newton’s deputies and Newton’s refusal to release body cam video of the incident. It was not the first time that Newton was criticized for shielding one of his deputies.

In the video that was briefly available on YouTube, Newton thanked those who had supported him. When it comes time to vote for his successor in the November election, Newton urged people to vote for Addison County Sheriff’s Department Sgt. Mike Elmore, whom he has been grooming for the job. Newton said that Sheriff Keeler had made way for his rise to the Addison County sheriff’s position, and he wants to ease the way for Elmore to follow him.