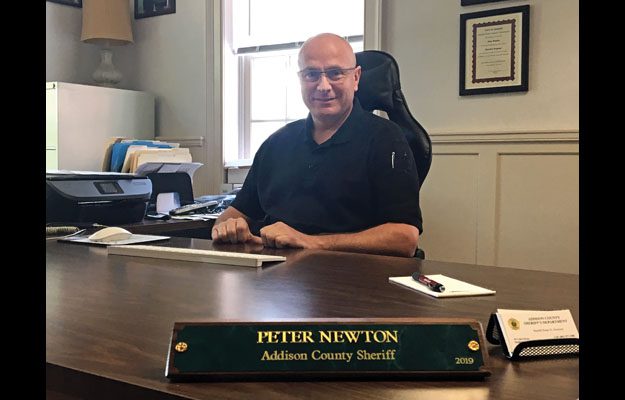 MIDDLEBURY — Peter Newton spent almost a year campaigning hard to become Addison County sheriff.
Now five months into that job, Newton said he’s begun to realize some of his campaign goals, including developing a better trained and better outfitted roster of full-time deputies.
“I think things are starting to come together,” Newton said during a Tuesday interview.
Newton succeeded former Sheriff Don Keeler. He’s only the third sheriff to serve the county during the past four decades.
Since taking office, Newton has sought to ratchet up his complement of full-time deputies in order to rely less on cobbling together shifts with part-timers. The roster currently includes 12 full-time deputies and a handful of part-timers. Those deputies handle a variety of tasks, including patrols, safety details at construction sites and courthouse security.
“In the past couple of years we’ve been pushing toward this trend of having more regular people around full-time,” he said. “There used to be a lot of people who would work 10 hours this week, five hours the next week, maybe 40 hours the following week. They just weren’t here on a regular basis.”
More full-time staff means more predictability.
“We can rely on these people to be here every day, versus, ‘Oh, we don’t know if so-and-so is going to work here today or somewhere else,’” Newton said. “It’s been good for me to have people around more regularly.”
Those people are now assigned mandatory online training each month to brush up on skills such as de-escalating potentially violent situations, defensive tactics and minimizing the need for use of force. Deputies are tested following their review of material on the national PoliceOne Academy website. This training is in addition to the classes they take at the Vermont Police Academy.
“I’m big on training,” Newton said.
Newton said he’s also working on ways to retain his deputies. To that end, he’s begun covering accident insurance for deputies and their families, adding he plans to make retirement plans available — calling for employee and employer contributions — “within the year.”
He believes he’ll have to start offering more amenities to his workers, as his department currently can’t complete with the perks qualified law enforcement officials can get through most municipal police departments and Vermont State Police.
“It’s all got to work out for everyone in the long run,” Newton said of the cost of extra benefits. “But that’s what we’re looking at going into the next year. How do we afford it? We’re not going to keep anyone if we don’t offer it. We’ll keep losing deputies to departments that can offer great benefits.”
The sheriff’s department still doesn’t offer health insurance benefits to its deputies, and that’s not likely to change in the immediate future due to budgetary constraints, Newton lamented. Offering health insurance would mean significantly increasing the price of the department’s contracted services, he noted.
“It’s a lot of money, no matter how you look at it,” Newton said. “The way we operate, we don’t have a budget of money we can pull from. We have to somehow fit it into the contract price. We’re trying to figure out how to afford these benefits to be competitive, but also not have to raise the rates a lot to the towns and other people we serve.
“We’re going to figure out a way, but Rome wasn’t built in a day,” he added.
Newton said several of his current deputies fortunately get health insurance elsewhere, including through their spouses.
Newton said he’s sacrificing a potentially larger salary in order to build his department.
Sheriffs are allowed to take a 5-percent fee for all the contracts they manage, according to Newton, who said he’s elected to instead reinvest that money in the department.
“I feel right now it’s more important to put (the funds) back into the department to help build these programs that we need and get the equipment we need,” he said.
Looking into the future, Newton has set a goal of having a police K-9 (dog) team “within the next year.” He said he already has candidates willing to become a dog handler. The team would supplement existing K-9 teams in Vergennes, Middlebury and with the state police. The animals perform great service tracking down missing persons, suspects and detecting contraband.
And like additional employee benefits, a police dog program will cost money — largely for start-up costs that would include retrofitting a vehicle to accommodate the animal. But Newton is confident he’ll be able to pull outside resources together for such a program.
Another one of the new sheriff’s goals: Assigning a deputy to network with local school children. This person would focus on preventing crime and at-risk behavior among children, working within the school settings. He has a specific deputy in mind — Colin Alfred — to do the job. Newton explained Alfred has experience helping and mentoring children.
“He’d be a great fit for the job,” he said. “His visits to schools thus far have been very positive.”
Newton has outfitted his deputies with new uniforms that he believes are less institutional and thus less intimidating to the citizens with whom his employees deal. The uniforms this summer are a dark Polo short-sleeved shirt and light khaki pants.
“The feedback we’ve been getting are that the uniforms make (the deputies) more relaxed and more approachable,” Newton said of the clothing, which he added is a better fit and more comfortable for his employees.
Deputies also have new lighter-weight bulletproof vests.

A BUMP IN THE ROAD
While Newton appears to be off to a good start, there have been a few bumps in the road.
The Addison County Sheriff’s Department has for the past six years hosted the county’s first-ever unit for special investigations, headed until recently by Det. Sgt. Ruth Whitney. Whitney had announced plans to retire next June, according to Fred Saar, executive director of the Addison County Unity For Special Investigations (ACUSI).
The ACUSI board has formed a subcommittee to determine the short- and long-term future of the detective’s position, which helps area law enforcement agencies investigate assault and sex crimes against adults and children.
Newton confirmed “the position is currently vacant. I have someone I can move into the position.”
The Independent will feature an extensive article about the ACUSI post next week.
Colin Alfred joined the Addison County Sheriff’s Department this past spring, and said he believes he made the right decision.
“I believe Sheriff Newton is driving the department in the right direction,” he said. “He wants us to have a stronger presence in the community in a positive way… Sheriff Newton and the department are treating everyone with respect. With this respect (the sheriff) is creating a strong trust between everyone in the department. It’s been a pleasure working at this department and the people who are in it.”
Cpl. Michael Elmore also gave his boss high marks.
“Sheriff Newton definitely has a community policing mindset and is always looking for ways that the department can better serve the county,” he said. “It helps having someone running the department that you can tell cares about the community and it sets an example for the rest of us in the department on how to treat the people we serve. It’s also exciting to hear about his future plans for the department and how we can continue to grow as a team and as a greater presence in our county.”
Newton, in turn, is pleased thus far with the way his deputies have been performing their duties.
“I take fewer complaints and I get more compliments about how people are being treated by the deputies out there,” Newton said. “That’s a big thing for me when I hear how great it was to meet my deputy today.”
Reporter John Flowers is at johnf@addisonindependent.com.