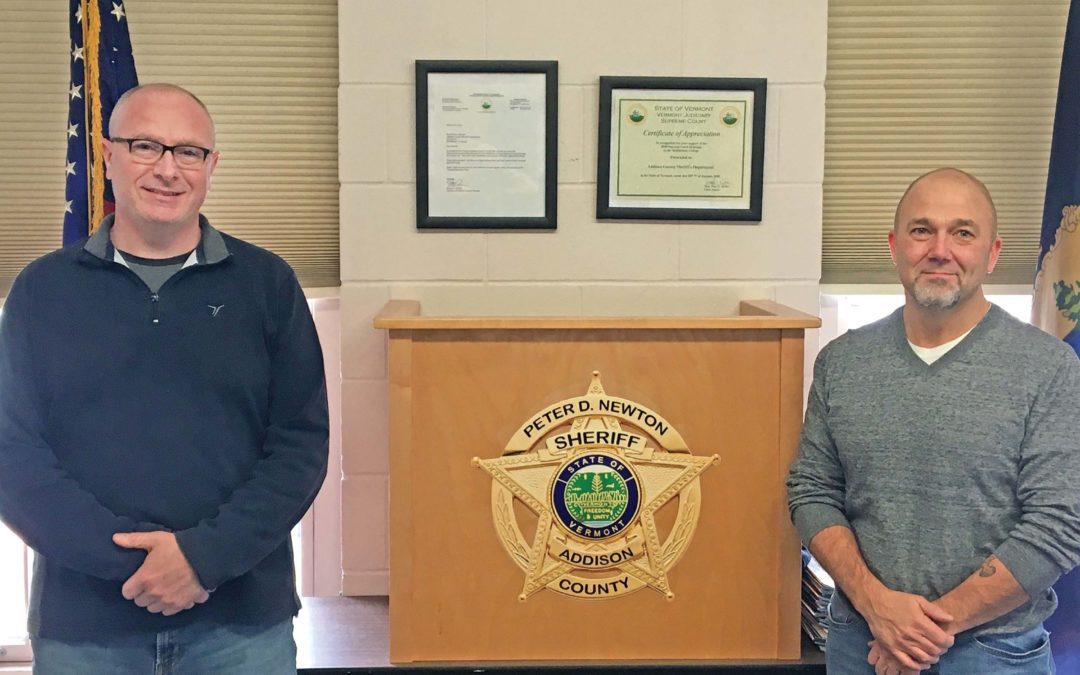 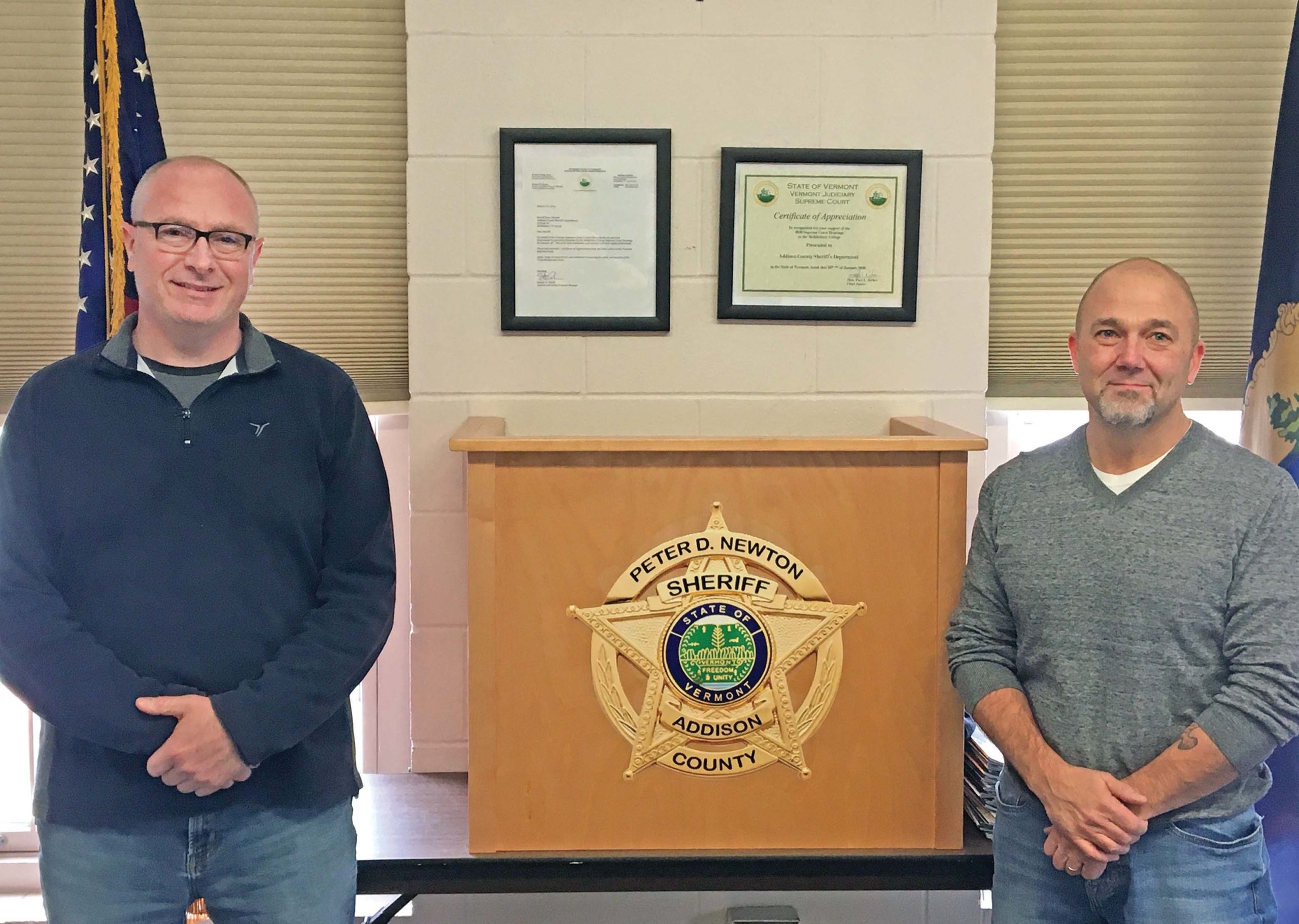 ADDISON COUNTY SHERIFF Peter Newton, left, and CJ Campbell, the department’s program director, have launched a fundraising campaign for $1.5 million to enable the ACSD to put two deputies on the road, around-the-clock, to help with county law enforcement.
By John Flowers

For us to stay on the road, we’ve got to write a lot of tickets. We need to find a better way.
— Sheriff Peter Newton

MIDDLEBURY — Addison County Sheriff Peter Newton is seeking community support in raising $1.5 million to transform his organization into a one-stop shop for law enforcement and community services ranging from jump-starting stranded cars to connecting people with mental health and addiction counseling.
He’s calling it the Addison County Community Support program. It’s primary feature calls for two deputies on the road throughout the county, around-the-clock, seven days per week.
“We will be forging a series of new partnerships that will allow us to offer both traditional and non-traditional law enforcement services,” Newton explains in a brochure he’ll soon send out to Addison County households. “Our goal is not to ‘reinvent the wheel,’ but rather to take the best of programs we have seen from around the country and shape them to fit the needs of our citizens and address the quality-of-life issues that impact so many of us daily.”
Among the menu of services, according to Newton:
•  An in-house social services, a team that can “assist people immediately in finding the services they need” and provide ongoing “support and coaching.”
•  Assistance in accessing mental health and addiction counseling at the time of crisis.
•  Restorative justice programs “to hold low-level offenders accountable but keep the cases from clogging the court system before being charged with a crime, whenever possible.”
•  Community safety and education programs, such as Safe at Home, and Neighborhood Watch.
•  An alarm response program with regular home and business checks.
•  School safety officers for the whole county.
•  “Safe driving classes” offered to first-time and youthful drivers in lieu of traffic tickets, and assistance for people struggling to get their licenses reinstated.
•  Free child inspections for children’s car seats and help with replacement, if in financial need.
•  Mediation and conflict-resolution services.
•  Animal control education and prevention, and investigation of animal cruelty cases.
•  Creation of a Sheriff’s Department Advisory Board that will include the county state’s attorney, public defender, juvenile public defender, and community members. The panel — among other things — will discuss crime trends, innovative approaches to law enforcement, according to Newton.
•  Free vehicle VIN (vehicle identification number) verifications for any county resident.
Also, Newton promised each of his deputies will be equipped with an automated external defibrillator and emergency first aid training and supplies. Deputies will also have training and equipment to get people into their own locked cars, as well as a booster pack to resuscitate dead vehicle batteries, according to Newton.
The Vermont State Police, according to Newton, are on board with the new program. He acknowledged the VSP and Bristol, Vergennes and Middlebury police departments will remain the primary law enforcement responders in their jurisdictions. He said the two ACSD deputies will be available to support local police agencies at major crime scenes, and to respond to less severe service calls, such as vandalisms, larcenies, noise complaints, neighbor disputes, or animal abuse allegations.
Residents will be able to reach the ACSD deputies through a direct line. State dispatchers will know how to reach the deputies are out in the field. People will continue to call “9-1-1” in an emergency, Newton stressed.
“We would always welcome our law enforcement partners within Addison County to help us protect and serve our citizens as well as keep our roadways safer,” said Lt. Cory Lozier, station commander at the New Haven state police barracks.
“We all wear different uniforms, but we’re doing the same job,” ACSD Program Director CJ Campbell said. “Everyone has a different role. But if we can fill the gaps and take some of the pressure off, everybody is going to be on board with that.”
If county residents agree to bankroll the Community Support program on an ongoing basis, it will represent a major expansion for the sheriff’s department, which now has 10 full- and part-time officials and an annual budget of around $800,000, according to Newton. In addition to providing security at the county courthouse and safety details in construction zones, the department has traffic enforcement contracts with 16 municipalities. The sheriff has no plans to drop those services.

WRITE A LOT OF TICKETS
Newton — in his first term as county sheriff — has been concerned his deputies might be feeling pressure by towns to write tickets as a way to offset the cost of the traffic enforcement contracts the department holds with the ACSD.
“I think it’s unethical in a way that a deputy might not have the same ability to decide whether to write a ticket or give a warning, because … the towns are saying ‘We need ticket revenue to pay for you,’” Newton said. “It’s hard to do business that way. So for us to stay on the road, we’ve got to write a lot of tickets. We need to find a better way.”
And Newton and Campbell, believe that “better way” is the Community Support program.
Newton said the Community Support program can’t be subsidized through state and federal grants, and he doesn’t want it to be reliant on tax revenues. So he’s hoping Addison County residents will be willing to pay for it with donations.
“If every household in the county contributed $110, the budget would be met,” he said. “We understand not every home can afford an investment of that amount and we are actively seeking other community support, but every contribution helps.”
There will be years the ACSD doesn’t make its fund-raising goal, Newton acknowledged. When/if that happens, he’ll approach local communities for buy-in.
Newton is already test driving the Community Support program; two of his current deputies recently began running 12-hour shifts in the county. But he knows he’ll need to hire four additional deputies to achieve his goal of around-the-clock coverage. He also wants to hire a social worker who’ll be embedded within the ACSD to help people access local, state and federal services for which they qualify.
Several Addison County officials have endorsed the program.
Addison County State’s Attorney Dennis Wygmans said he believes the service could help nip criminal activity in the bud.
“We were seeing so many cases where an earlier intervention could have helped to resolve an issue before it became criminal, saving the parties from unnecessary harm and involvement in the court system,” he said.
Addison County Juvenile Public Defender Pam Marsh agreed.
“Prevention and early intervention are much more meaningful than entering the criminal or juvenile justice system,” she said. “Especially in dealing with juveniles, they do not connect a charge a month after an event with the event itself, which has often been dealt with in school. If a situation can be avoided by having secure housing, adequate food, and the use of restorative justice principles in a timely fashion, thereby reducing the need for court involvement, the whole community is stronger.”
Keep an eye on the ACSD’s Facebook page (tinyurl.com/y5tt8gsh) for future updates on the Community Support program.
John Flowers is at johnf@addisonindependent.com.