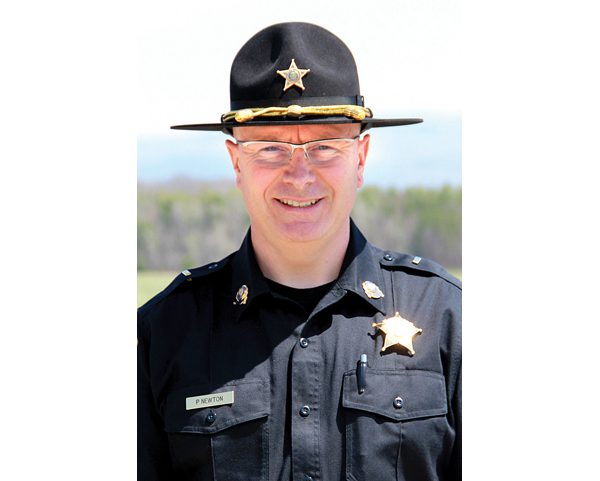 MIDDLEBURY — At a press conference Wednesday morning called by Addison County Sheriff Peter Newton to provide his own “spin” on events relating to an “unprofessional conduct” complaint against him filed by the Brandon selectboard, and a separate complaint filed by Brandon Town Manager David Atherton, Newton tried to make the case that he and his department fulfilled their duties on time and according to standard procedure.

Newton focused his comments on events surrounding a traffic stop on July 9, 2021, of Atherton’s son, who is a minor. Deputy Sheriff River Payne cited the younger Atherton for speeding on Route 53 going 58 mph in a 30 zone. Once home, the son explained that he felt intimidated during the stop. As a concerned parent, David Atherton, who is Brandon’s town manager, called the sheriff’s department on July 9 and asked to speak with Deputy Payne, but as he was not in the office, he left a message for him to return his call. According to Atherton, Payne never returned his call.

Having waited three days for Deputy Payne to respond, Atherton again called the sheriff’s department on Monday, July 12, according to Atherton’s recalling of the event and a timeline he provided, to request bodycam footage from his son’s traffic stop. He talked to Addison County Sheriff’s Department Business Manager Jeanette Willey, who conferred with Sheriff Newton and later called Atherton back with the message from the sheriff that Atherton would have to go through the Vermont Judicial Bureau to request the bodycam footage. Atherton said he called the Judicial Bureau, which was also “not willing to help.”

Atherton said he then made a call to Brandon Police Chief Christopher Brickell asking what the town police department’s policy was on providing bodycams when requested, and Brickell advised that bodycams in civil cases should be made available.

Atherton said he again called the sheriff’s department later that day, July 12, asking to see the bodycam and noting that the Freedom of Information Act required the department to make the bodycam available if Newton’s department wouldn’t provide it otherwise.

In Newton’s recounting of the timeline at Wednesday’s press conference, he omitted the calls made by Atherton on July 12, and omitted Atherton’s request to see the bodycam on that same day. Rather, Newton’s timeline suggested that Atherton made those calls on July 14 at 9:04 a.m. and again at 9:10 (after having allegedly conferred with Chief Brickell in those six minutes). Atherton said he then sent an email at 10:31 a.m. on July 14 making a formal FOIA request for the bodycam footage.

When reporters asked Newton why he hadn’t simply provided Atherton the bodycam footage after Atherton’s first request, he maintained Atherton had asked for the bodycam to contest his son’s traffic ticket, and that process goes through the Judicial Bureau.

Atherton maintains he made the request to insure his son had not been intimidated by the arresting deputy, a statement his emails seemed to confirm.

Sheriff Newton conceded, during the press conference, that his policy would be to provide the bodycam footage when asked if the concern revolved around an officer’s conduct, but maintained Atherton’s request was about contesting the ticket.

In dueling emails, and at the heart of the matter for Newton, the sheriff alleges that Atherton was using his position as town manager of Brandon to try to influence his son’s speeding ticket. When asked at the press conference how Atherton’s position had any influence on the ticket, Newton couldn’t provide an answer.

Nevertheless, in an email sent at 8:57 p.m. on July 19 to Atherton and the entire Brandon selectboard, Newton questioned Atherton on why he would mention his role as town manager in his request for the bodycam footage.

“Sheriff Newton, I mentioned this during the conversations because we also have a Police Dpeartment in Brandon and I know that if someone called our police chief stating that they felt intimidated during a traffic stop, he would want to see the bodycam footage to determine what took place and to watch our officer’s behavior.

“Also, when you denied my original request for the bodycam footage, I reached out to our chief to discuss how he handles public records requests and he was a bit surprised that you would not comply. So my second phone call was to ask again (for the bodycam footage) and also relay that as a municipality we are required to provide this information. Then after the second denial I made the decision to send you a formal request that would get some type of response from you. Which, again, you did not respond to in the three-day timeframe that is governed by state statute.

“After calling your office again yesterday to state that you did not comply with my public records request in the allotted time, your office asked me to resend the request.

Minutes later, at 8:41 a.m. on July 20, Newton responded to Atherton by email saying he had complied with the FOIA request within the appropriate timeframe, and then alleged the following:

“I believe you were trying to use your position as an intimidation factor to my business manager. I believe that action is very inappropriate and very unprofessional…. My job is not a 9-5 job, so when I get around to dealing with your stuff should really not concern you. I included the board because I feel your actions of trying to use your position as a tool is very very very wrong, as I am sure the general public would agree.”

Atherton replied by email at 9:12 that morning, also now including the Brandon selectboard:

“Mr. Newton, I will be able to determine if your deputy was intimidating once I view the bodycam footage. You did not respond until the 4th business day and only after I called and spoke to your business manager, who suggested that I resend my request to her.

“Again, you are missing the point as to why I brought up my position. It was merely to state that we follow the law when records requests are sent to us and I would expect that every other agency do the same. I will stop by the office today to pick up the results and pay you.”

When Atherton stopped by to pick up the bodycam footage on July 20 over the noon hour, he brought along Brandon selectboard member Tim Guiles. During that meeting, Atherton said that after he had collected what he came for and paid the $21.57 he owed, Newton came out to the front office and called him into his private office. According to Atherton’s account, and confirmed by Guiles, he went into the room with the sheriff followed by a deputy who stood in the exit doorway. Newton then allegedly tried to coerce Atherton into putting the video of the traffic stop on social media, which Atherton refused to allow, as his son is a minor. As matters evolved, Atherton alleges Newton raised his voice and wouldn’t let Atherton respond, to which Atherton said the meeting was over and he exited the room.

Newton followed him out of the room still talking as Atherton walked away, and then, according to Guiles, starting questioning him on why he was there, again raising his voice and interrupting Guiles when he tried to speak. Guiles called Newton’s demeanor “very indignant” and said he waited until Newton finished talking before he replied.

He said was there to respresent the full board’s position, but that he and the board had discussed the matter previously and considered the sheriff’s decision to include them in the emails as “inappropriate,” as it was a personal matter between the sheriff’s department, Atherton and his son. Guiles said he “made sure to give the sheriff a response.”

In the sheriff’s accounting of the exchange with Guiles concerning the board’s position, Newton again mischaracterized the exchange when he wrote that Guiles “refused to answer.”

Because the sheriff was “agitated,” Guiles recalled in a recent interview, he and Atherton decided to leave without further discussion.

Following that exchange, Newton asked the Brandon selectboard via email for an “official response… about your stance on this matter.”

The board met in executive session on Monday, July 26, to discuss the issue and provide that response, in which they defended the actions of Atherton and filed a formal complaint against Newton with the Vermont Criminal Justice Council. That statement said:

“On July 19th, the Brandon selectboard was notified by the Addison County Sheriff Peter Newton that our town manager, David Atherton, had made a public records request to his office. It appears that Sheriff Newton was trying to intimidate David Atherton from following through with his records request. The Brandon selectboard finds this action on the part of Sheriff Newton to be inappropriate and is filing a complaint with the Vermont Criminal Justice Council with their Act 56 Professional Regulation Intake Form.”

In response to that official complaint, Newton called for Wednesday’s press conference to provide his account of the events. He also said he might refer the whole matter to the state attorney general, but added he had no specific outcome in mind.

Asked if he called the press conference to put “his spin” on this story and whether a recent Facebook post on the sheriff’s official page in which he called Atherton’s actions “corrupt” was an appropriate response, Newton responded that they (the selectboard) have their avenues of communication and he had his. “I think they made a statement and I made a statement.” When reminded that he requested an official comment from the selectboard and their statement was a response to that request, he changed the topic.