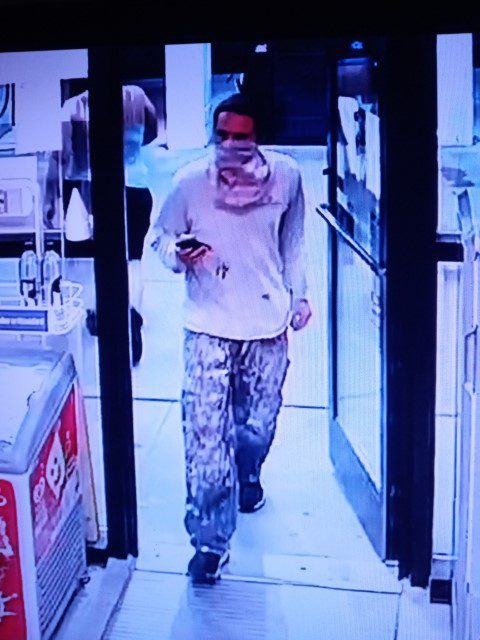 A security camera at the Jolley Shortstop on Court Street in Middlebury captured these images of a man who robbed the gas station at knifepoint Monday night just before midnight. Anyone with information on the robbery is asked to contact Middlebury police at 388-3191.

MIDDLEBURY — Police are looking for men suspected of being involved with armed robberies in Middlebury and Shoreham on Monday evening.

Middlebury police are searching for a man who robbed the Jolley Shortstop gas station at knifepoint in Middlebury just before midnight on Monday, Aug. 9.

According to Middlebury Police Chief Tom Hanley, the suspect is described as being white, about 5 feet, 8 inches tall, with slender build with dark hair, wearing jeans covered in paint, a long-sleeved white shirt and a bandana across his face. Store officials told police the man walked into the store at 220 Court St. and loitered for a while, then went to the counter, produced a knife and demanded money.

Hanley said the man told the store clerk he had a gun, though he didn’t produce one during the incident. The clerk gave the suspect a “small amount of cash,” whereupon the suspect said, “This is enough,” and then fled on foot into a wooded area behind the nearby Hannafords Supermarket, according to Hanley.

The man also made off with three packs of Marlboro 72 cigarettes, Hanley added.

No one was injured during the incident, police said.

Anyone with information on the robbery is asked to contact Middlebury police at 388-3191.

Authorities are investigating whether this robbery is related to another one that occurred in Shoreham earlier that evening, a case being probed by Vermont State Police.

Meanwhile, Vermont State Police are investigating an assault and armed robbery in Shoreham during which two men forcibly took money from two residents of a farm late Monday night, Aug. 9. One of the victims sustained minor injuries.

Troopers responded at about 11:14 p.m. Monday to a report of an assault and armed robbery in the milking parlor of a farm on Richville Road. Trooper arrived and were told by the person who was injured that he declined medical treatment. So the troopers canvassed the area, but a possible lead proved fruitless.

Both suspects wore dark masks and unknown coverings on their heads.

One of the suspects brandished a firearm during the incident, and one brandished a baseball bat that was used to assault one of the victims. The suspects received an undisclosed amount of cash and fled the scene in a silver hatchback-type vehicle.

Anyone with any information regarding this incident is asked to contact the New Haven state police barracks at 802-388-4919. You can also submit an anonymous tip at vsp.vermont.gov/tipsubmit.

The robbery at the Middlebury Short Stop had some elements in common with other armed robberies in Rutland County.

The Brandon Reporter published a story saying that state police are investigating an armed robbery on Aug. 1 at 5:18 a.m., in which a lone man entered the Maplefield’s convenience store and gas station at the intersection of Route 7 and Route 3 in Pittsford, selected a soda and went up to the register. He then took out a knife and demanded the clerk hand him money from the cash register.

In each case, a lone man entered the store, selected an item then went to the counter, showed a knife, which one report said was 5-6 inches long, then demanded the clerk give him the money from the cash register. In each case, clerks gave the man the money and he left the scene without causing any harm to others.

In Pittsford, state police reported the man was wearing an orange T-shirt, light colored cargo shorts, camouflage hat, blue neck gaiter/mask, and black shoes with white soles. He fled the store with an undisclosed amount of cash, the soda, and three packets of cigarettes.

In Wallingford, the incident occurred Sunday, Aug. 1, at 11:30 p.m. at the Cumberland Farms convenience store on Main Street.

In Fair Haven, the armed robbery occurred on Wednesday, July 28, at 2:44 p.m. The man was reported wearing a dark-colored hooded sweatshirt, light-colored jeans with rips in the legs, and a flat-brimmed, dark-colored baseball cap.

He fled the store with an undisclosed amount of cash in a green bank bag with a broken zipper.

No one was injured in any of the three incidents.

Police are not yet suggesting the incidents are related, but the similar circumstances make that a possibility.

Anyone with information that may be relevant to these investigations is asked to contact the Vermont State Police in Rutland at 802-773-9101.

Tips also may be submitted anonymously online at vsp.vermont.gov/tipsubmit.