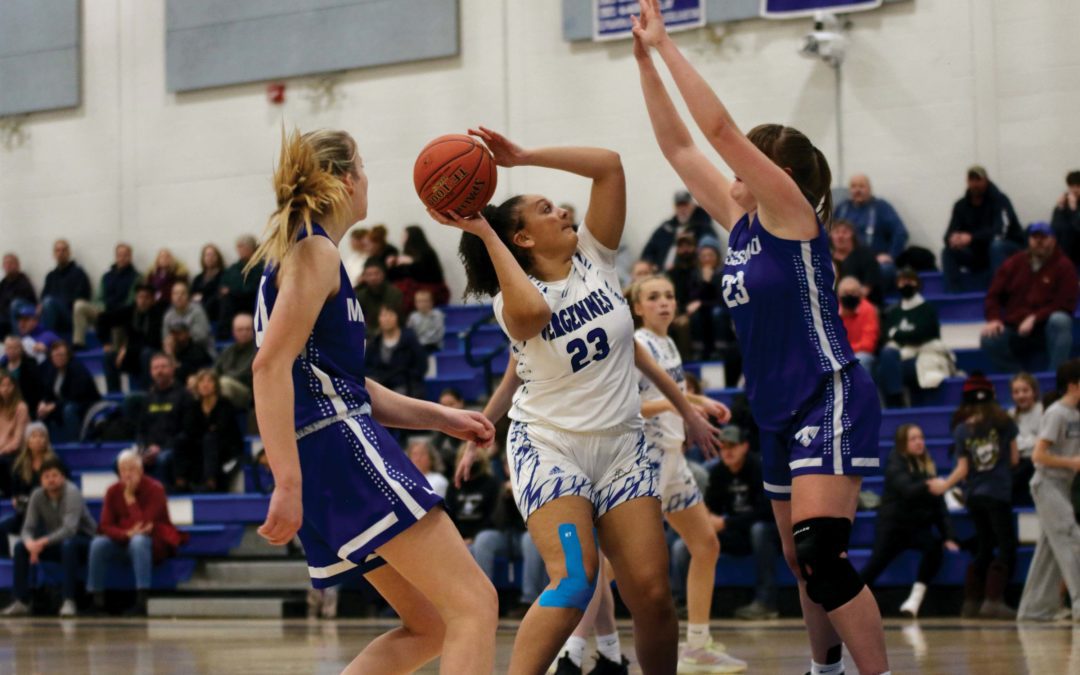 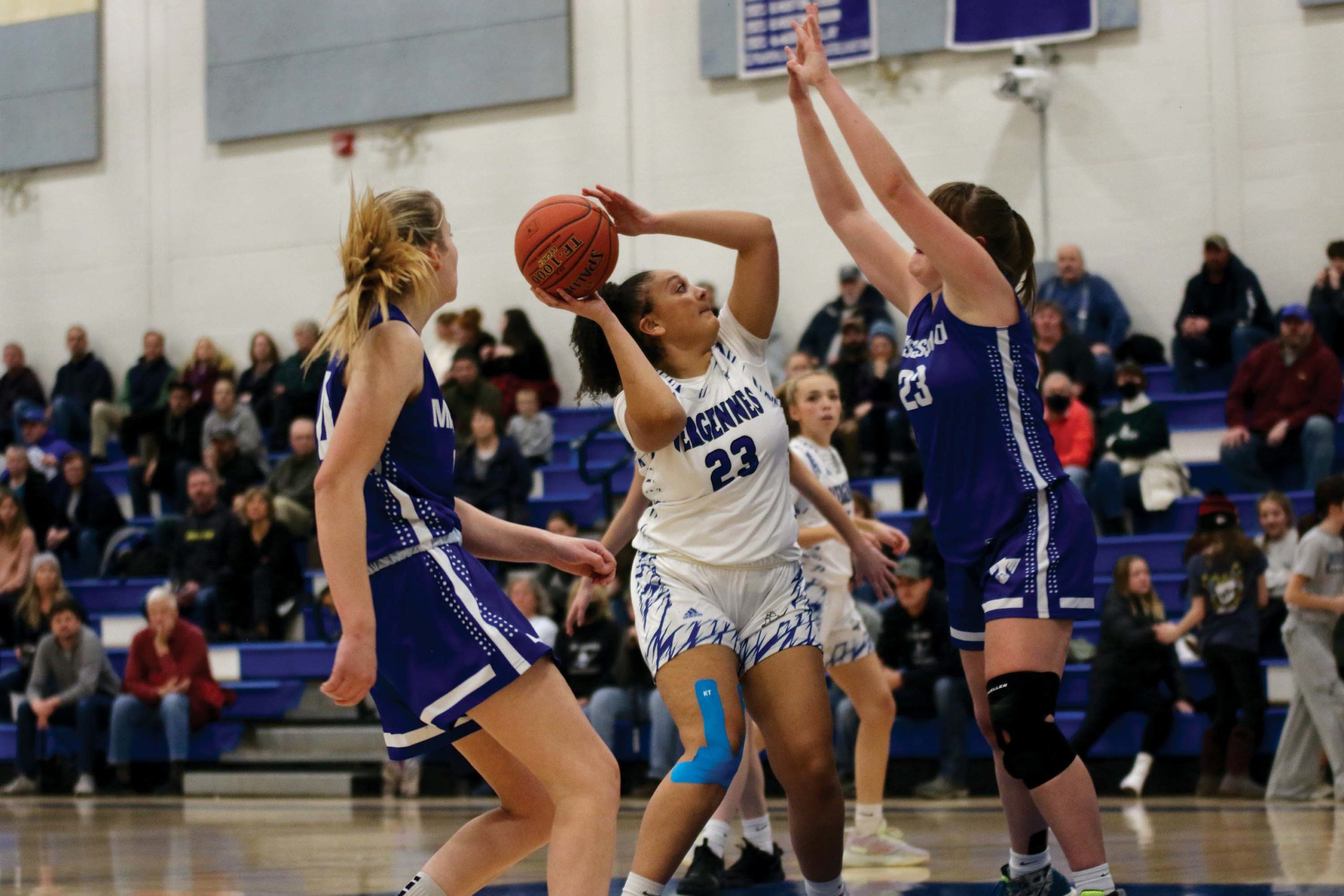 VERGENNES — The Vergennes Union High School girls’ basketball team on Tuesday recovered from first-half struggles against visiting Missisquoi to control most of the second half, but then fell victim to a T-Bird buzzer-beater in a tough 34-32 loss.

The Commodores, who dipped to 5-5, will look back with regret on a 9.5-minute scoreless stretch that began at 1:30, when they had a 5-0 lead after freshmen Ashtin Stearns hit the first of her four three-pointers.

The drought ended when senior guard Kyra Bradford hit a free throw at 4:00 of the second period, but by then the T-Birds had scored 13 straight points, six by senior guard Destinee Pigeon and five by junior guard Alexandra Bourdeau. 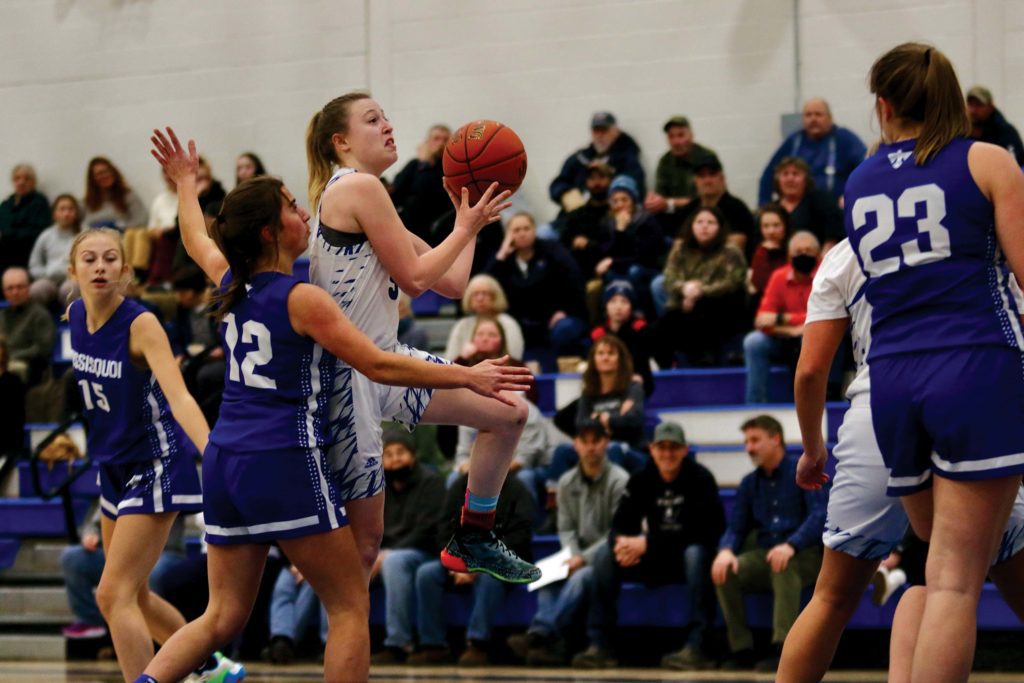 COMMODORE SENIOR GUARD Kyra Bradford soars through the lane on the way to the hoop during her team’s Tuesday home game vs. Missisquoi.
Independent photo/Steve James

The T-Birds were also controlling the boards in the first half (26-18), while the Commodores were missing layups and free throws (two for seven in the half, five for 16 in the game). Decent player-to-player defense and a combined nine points from Stearns and Bradford kept VUHS within striking range at the break, down 17-11, but Coach Billy Waller said his team was not shooting or running its offense well.

“We were slow out of the gate and not making a lot of shots that are makable for us. And then we weren’t running anything. We were just running around,” Waller said. “We’ve got to do a better job of executing stuff. In the second half we executed better and got some good looks.”

In the second half, and especially in the third quarter, the Commodores upped their energy level, starting to get to loose balls first and winning the board battle. Their post players, senior Finnley Jacobson and sophomore Kendra Jackson, and Bradford and senior guard Jasmine Little were particularly effective on the boards as VUHS won the rebounding battle in the third period, 14-5, and in the second half, 22-11, including team rebounds. 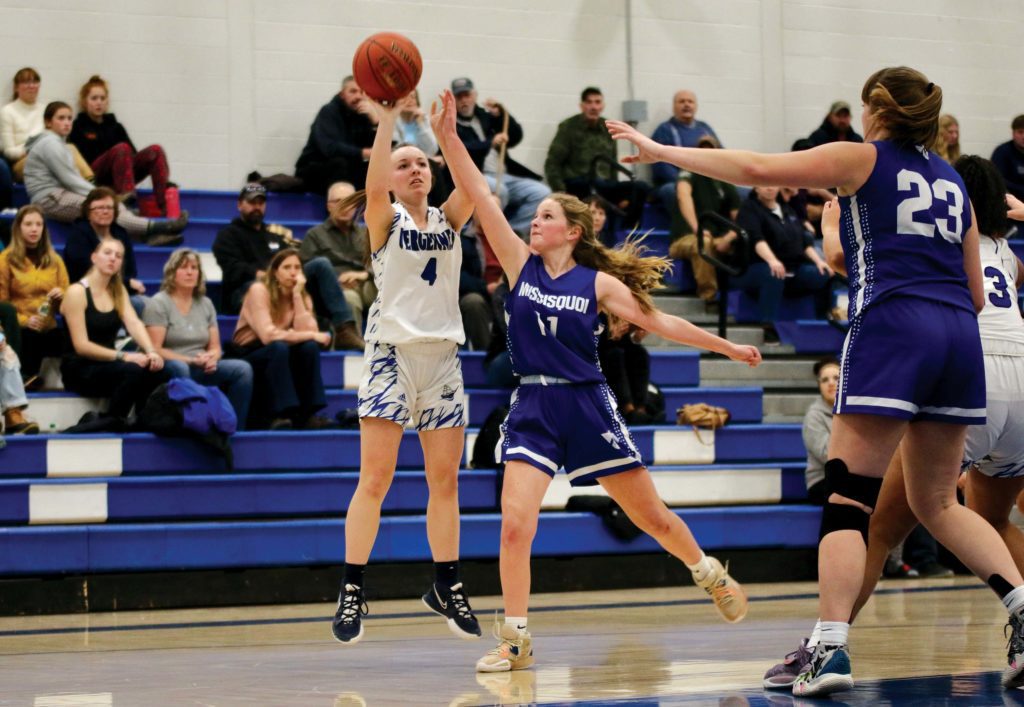 The teams traded points in the third period until the Commodores went on a 10-0 run to take a 26-22 lead. It began with Little crashing to grab an offensive board that led to a Stearns three at the four-minute mark.

Bradford followed by going coast-to-coast to convert a steal. Stearns swished another three at 1:53 to give VUHS the 26-24 lead, and junior guard Kaelin Sullivan nabbed another offensive board and hit a short baseline jumper to put the Commodores up by four at 0:30.

But just before the horn sounded, T-Bird senior center McKenzie Vincent converted in the post to cut the lead to two. That play would foreshadow events to come. 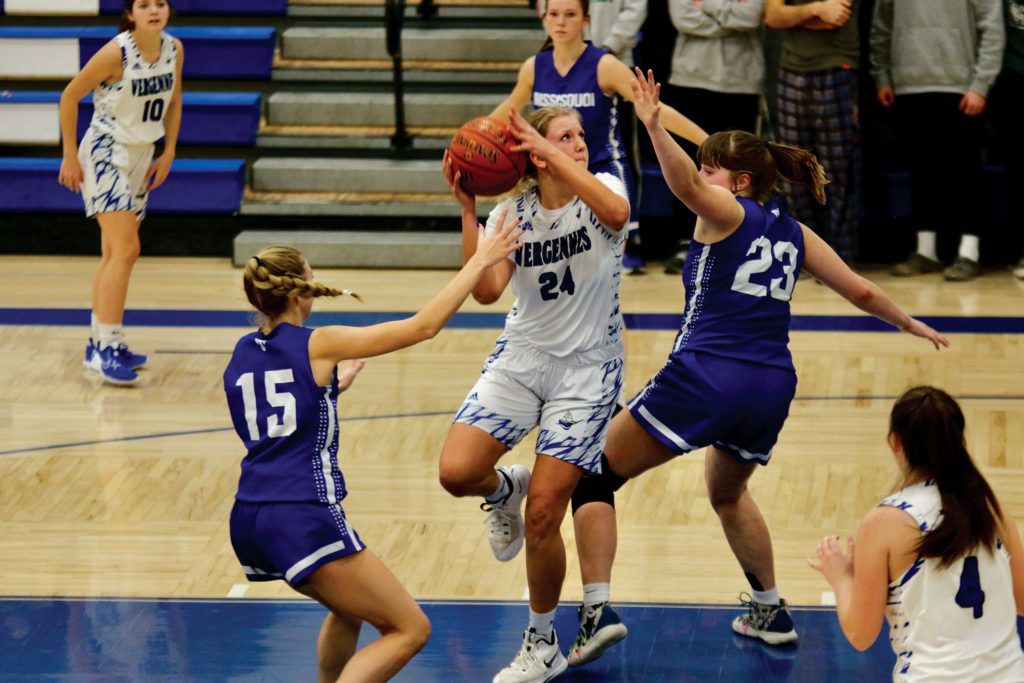 Points proved hard to come by for both teams in the fourth. Missisquoi’s Vincent hit inside to tie the score at 5:30. Stearns, fouled shooting behind the arc, sank all three free throws at 5:09 to make it 29-26 at 5:09. Jacobson followed with a hoop inside at 4:00, and the lead was five.

The Commodores scored only one point the rest of the way. The T-Birds got a break when Bourdeau banked in a three-pointer at 3:10. VUHS missed the front end of a one-and-one at 2:03, and Bourdeau converted a three-point play underneath at 1:47 on a feed from Vincent, and suddenly Missisquoi led. Thirteen seconds later Jacobson hit a free throw for VUHS to tie the game at 32-32.

With about 40 seconds left, the T-Birds got the ball back and worked it patiently for the last shot. It came with 1.4 seconds to go from Vincent, who received the ball on the left block, wheeled to her left and laid the ball in. The Commodores called time, but couldn’t go the length of the court to get a shot off before the horn sounded. 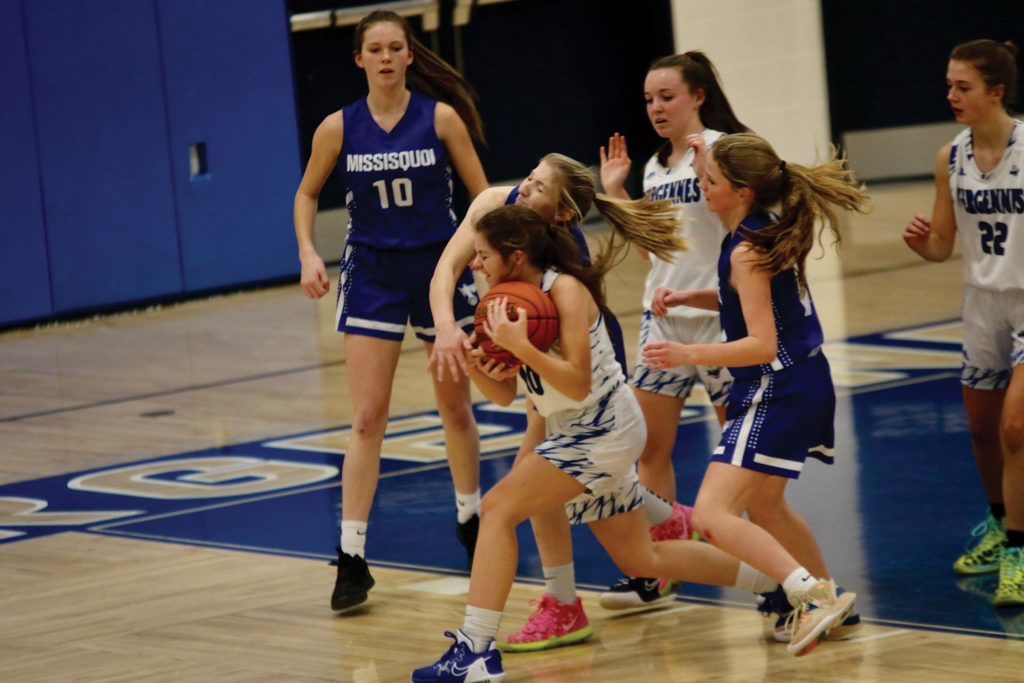 Stearns scored 17 for VUHS, Bradford had six points and close to that many steals, and Jacobson added five.

Waller said on Tuesday the early deficit might have been the biggest problem.

“It’s not good to put yourself in a position where you have to play catch-up. You expend a lot of energy,” Waller said. “We’ve got to put four quarters together.”