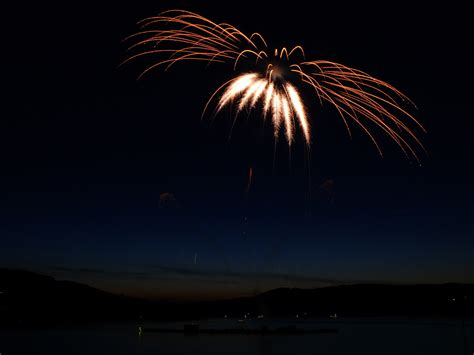 For a moment, it looks as if the weather might reshape another holiday celebration.

Like many others across the United States, our family’s Christmas was altered by the collision of a bomb cyclone and polar vortex, which brought gale-force winds and frigid temperatures to our corner of the world and knocked out our power for nearly two days. Thankfully, my parents, who live across town, never lost power. As the sun set on our cold, dark house on Christmas Eve, we packed up all our children, food, and gifts and unleashed Christmas on the grandparents. Sadly, our church never regained power in time for either the Christmas Eve or Christmas Day services; my children felt this loss more keenly than I expected, but we all adjusted. God knows we’ve all gotten used to adjusting since this decade began.

So when it begins raining as dark falls on New Year’s Eve and my already-exhausted children seem increasingly unenthusiastic about carrying on our tradition of attending Middlebury’s annual fireworks display, I prepare to adjust our plans yet again.

As it turns out, the rain slows to a manageable drizzle and we’re able to muster enough momentum to load everyone into the minivan and be driven very slowly by our 15-year-old (who just got her learner’s permit) to the elementary school.

This is where the peculiar magic of small-town fireworks begins.

We pile out of the minivan and cross the parking lot to the sidewalk by the chain-link fence that surrounds the playing fields. The wet pavement shines under the lights from the field. Other people are lining up to watch, but it’s hardly crowded. We wave to a few people we know, but for the most part everyone seems clumped up in their family units. It’s dark, and we’re already turning our eyes to the spot on the field next to a U-Haul trailer, where a couple of silhouettes are preparing the fireworks.

Suddenly the lights switch off, and the fireworks begin with a sparkling gold tail that shoots up above our heads and explodes into a ball of glittering pink fragments.

The silence is, to me, the most profound thing about our town’s little fireworks display each year. There is no soundtrack, no orchestra: For about twenty minutes, we watch in relative quiet as shimmering colors pop and explode over our heads. Aside from a few murmurs in response to a particularly impressive pyrotechnic, or the occasional question from my children (“Are fireworks bad for the environment?”), we stand together with neighbors and strangers, our heads tipped silently towards the sky.

And yes, it’s beautiful; every year I’m grateful to those silhouettes wielding torches on the ground, who bring us this lovely display of color and light. But the truth is that there have probably been very few innovations in fireworks design over the decades — at least, not many that have made their way to our little Vermont town. They are round, or reminiscent of weeping willows with a delicate fall of sparkles, or flare-like. They are pink, red, green, blue, gold. One year is much like any other. So why do we keep going, year after year?

For that matter, why do we set off fireworks on New Year’s Eve? Neighboring towns have their fireworks shows on July 4the, which makes more sense from both a climate perspective (it’s significantly warmer in July than in January) and a narrative: Fireworks have a martial quality that seems appropriate when observing the War for Independence (the rocket’s red glare, and whatnot.)

As it turns out, launching fireworks on the New Year can be traced back to the Chinese, who invented fireworks in the 7th century and set them off during New Year celebrations in order to scare away evil spirits with noise and light.

Perhaps to our peril, evil spirits don’t enter much into the worldview of most modern, post-Enlightenment people. But standing underneath this year’s fireworks display, I’m curiously moved. The noise — those booms and pops and sizzles — may ward off evil, but it’s also a perfect, primal way to commemorate all the emotions of the past year. We make noise when we’re very happy or very sad: A single BOOM can contain all the explosive joys and griefs stored up in a human heart over the course of a year. I used to find the lack of musical accompaniment unsettling, but now I’m grateful that our town doesn’t cover up the booms with military marches.

It might have been enough for the medieval Chinese to invent fireworks that made a loud noise and stop there, but they went the extra step and made them beautiful. During the grand finale of this year’s fireworks show, I see galaxies unfolding above me — our tiny human attempt to create a manageable universe from our pinprick point in space. There is something touchingly defiant about shooting flares of light and color out into the vast darkness.

“What’s the purpose of fireworks, anyway?” asks one of my adolescent cynics.

We stand there amid the booms and the sparkles, together with a couple hundred people, our heads tipped up to the sky. If you could zoom out of this moment, you would see similar clusters of people around our state, throughout our country, across the globe, faces gazing up, illuminated by tiny pops and flashes.

What’s the purpose of all this useless noise and beauty?

Fireworks may be one of the most poignant ways in which we humans declare, “We are here!” Isn’t that purpose enough? Much like the past year, the year to come will be filled with successes and failures, laughter and sorrow, love and loss, and at the end of it those who remain will again send flares of ephemeral beauty into the sky with a boom. We are here!