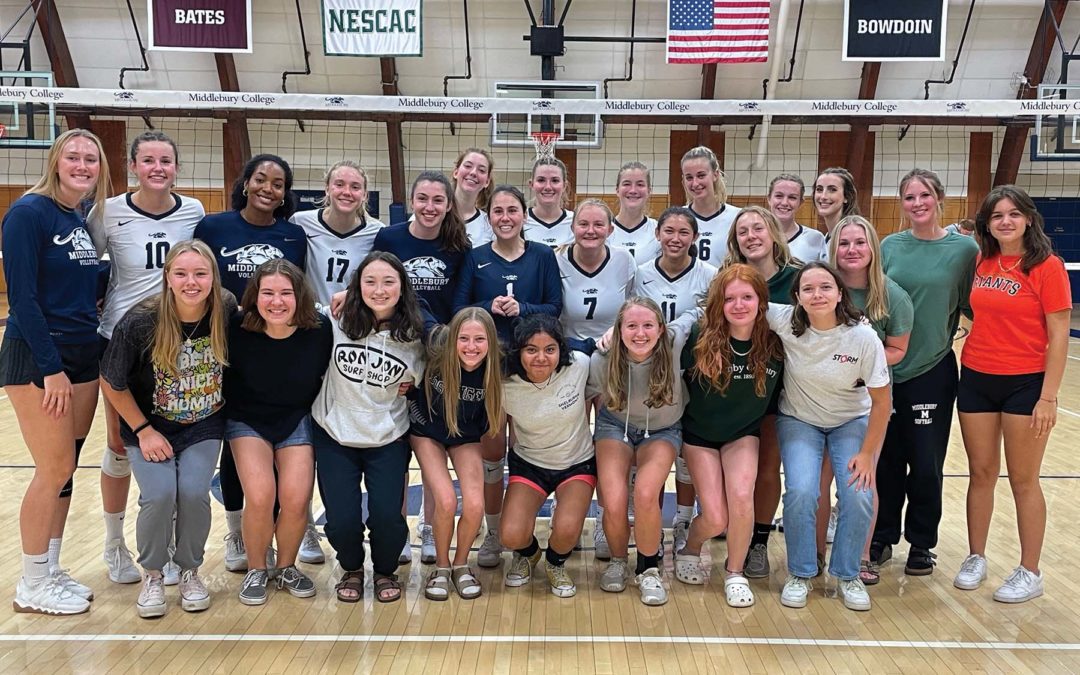 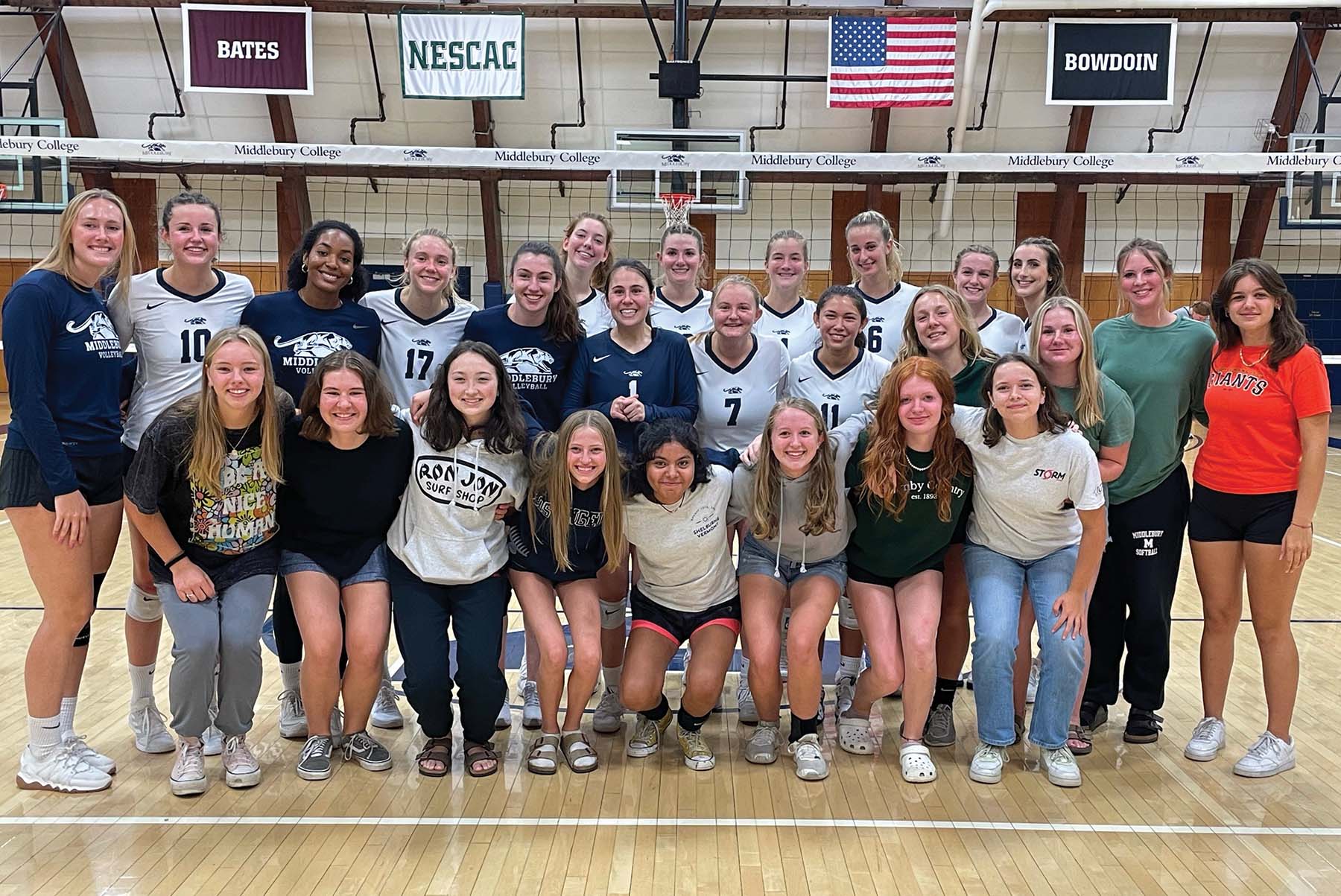 THE MIDDLEBURY COLLEGE Women’s Volleyball team and the Middlebury Union High School JV Volleyball team meet this fall in the college gym. The two teams developed a relationship, the college team providing instruction and mentorship. The MUHS team finished with a 16-1 record and won the statewide JV tournament. The college team (14-9) competes against Williams College Friday in the NESCAC Tournament.
By Karl Lindholm

First pickleball, now volleyball: I am so broadening my Addison County sports horizons!

Next fall, a year from now, Middlebury Union High School will add a varsity sport and have a girls’ varsity volleyball team, not a club but a fully sanctioned team. That doesn’t happen by accident, out of the blue. Their preparations have been thorough and the process engaged in a remarkably short (post-COVID) time.

Just last year, fall 2021, nine intrepid 9th-grade girls who were not playing a fall sport formed a “club” volleyball team, called themselves the “Middlebury Mountain Goats,” found other schools willing to play them at the JV level, coming away with a 7-4 record.

This year’s team, official MUHS JVs, had a record of 16-1 against other JV teams in the state and won the statewide JV tournament, defeating Essex 3-1. The varsity team next year will have an experienced core, though still young. Optimism is high indeed.

There was also a JV “B” team this fall, as 26 students participated in the program (three juniors, nine sophomores, 14 freshmen). That level of interest speaks to one of the central concerns whenever a sport is added to existing offerings: sustainability. Will there be sufficient interest over time, after the initial bloom, to maintain a program. 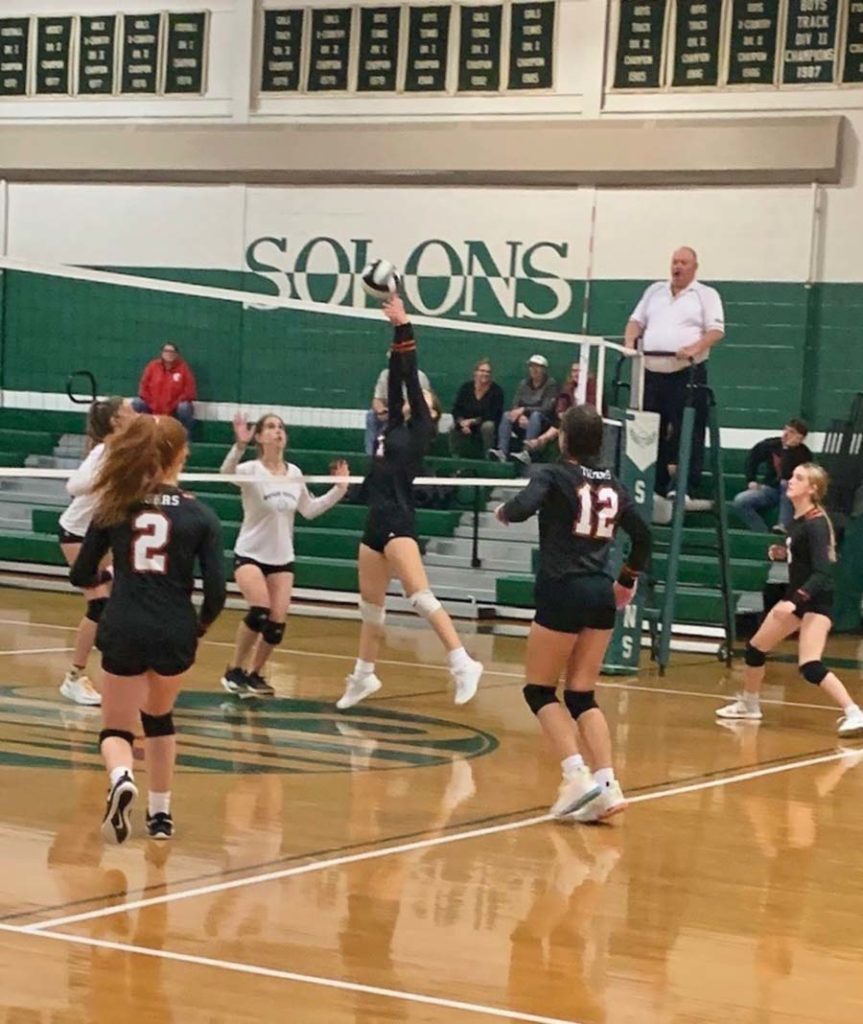 MARGARET ORTEN PLAYS a ball at the net in an MUHS game against Montpelier. Ronan Young (2), Sienna Rubright (12), and Maggie Klingensmith (r) are poised to make a play.

Sean Farrell, activities director at MUHS, was appropriately cautious, at the outset anyway. “I struggled with it as we moved forward,” he said in a conversation last week. “I took a long time to really think about it. It’s always a concern — will there be numbers to support it. We had many conversations.

“But it was clear the interest was there, the numbers are impressive, and this is already a pretty accomplished group. These are largely athletes that were not going to be playing field hockey or soccer. Anything to support our kids trying to excel, I’m all for it.”

The team has two coaches, Bethany Morrissey and Amanda Young. Bethany, the head coach, taught at Salisbury Community School for 16 years and now teaches math at Middlebury Union Middle School. She is also the girls’ JV softball coach at MUHS. Bethany was a college athlete, playing volleyball (captain) and softball at Anna Maria College in Worcester, Mass., and was a two-sport athlete in high school in Marlborough, Mass.

She pointed out to me that volleyball, aside from track and field, is the “most popular high school female sport in the country,” according to the NFHS (National Federation of High School Sports). “It’s super fun. There’s no down time; you’re constantly moving. If you make a mistake you can immediately redeem yourself.”

Amanda, her assistant, is a medical doctor, the director of Emergency Medicine at Porter Medical Center. A Middlebury College graduate, she is an “avid athlete” and was a member of the squash team in college. She grew up in Cornwall and played soccer and lacrosse as a high school student at MUHS.

“I love doing things with my kids, if they let me tag along,” she told me. “Sports helped me in my life, making connections, building confidence. I work better in teams in my job because I played sports.”

Both coaches have daughters on the team, 10th-graders Ronan Young and Emma Morrissey (and both have 8th-grade daughters who are avid players). It was Ronan’s and Emma’s enthusiasm and commitment as rising 9th-graders that got things rolling and ultimately carried the day. As Bethany and Amanda wrote in a fundraising letter to the Lions Club:

“The adventure started with two teenagers, a petition, and a volleyball . . . and encompassed car washes, epic carpooling, student community service, and successful campaigning by 26 very committed and amazing young athletes.”

Everyone I spoke to about this volleyball “adventure” pointed to the importance of “March Madness” to the growth of volleyball locally. No, not that March Madness. This March Madness is a statewide middle-school initiative that took over MUMS in March 2022, just last spring, in the hiatus between the winter and spring sports seasons.

Over 60 kids from 6th to 8th grade participated in this “mini-season of coed play,” (in which) “the balance between strict competition and a fun/safe experience should favor the latter,” according to the program’s guidelines. The Mountain Goats were the “coaches” in this middle-school volleyball jamboree. 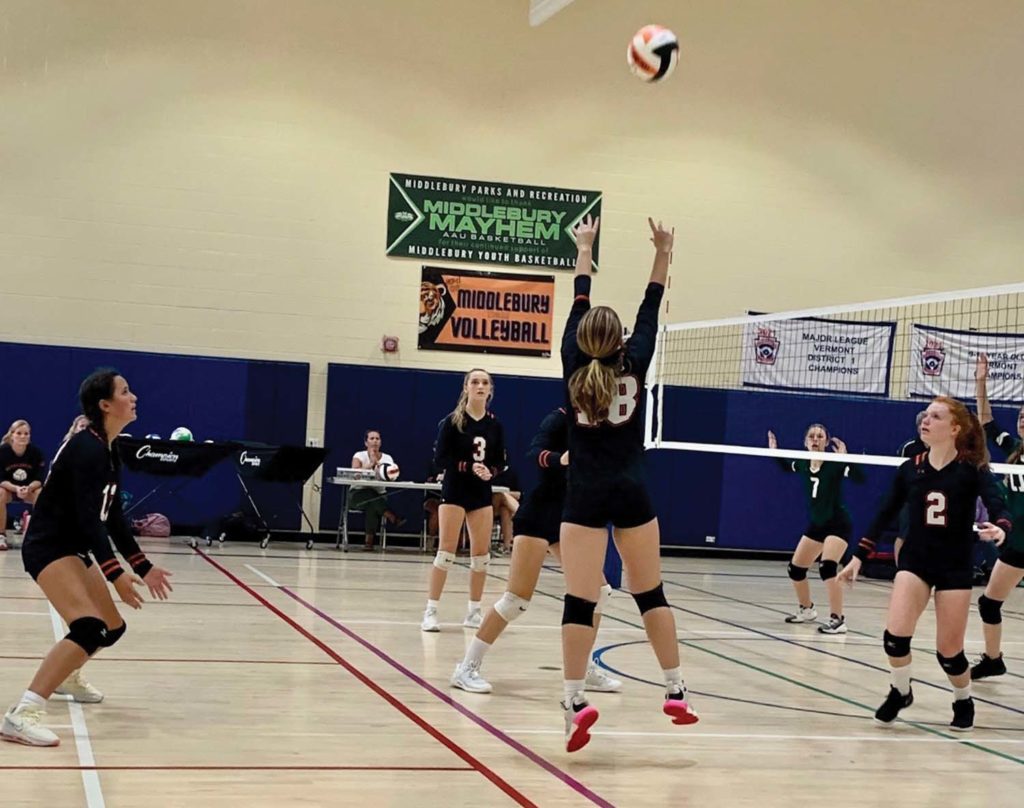 EMMA MORRISSEY (18) goes high to play a ball in a home game vs. Vermont Commons School this fall in the Parks and Recreation Gym on Creek Road. Ronan Young (2), Sienna Rubright (12), and Maggie Klingensmith are in position to engage in play.

The Middlebury College volleyball team has taken a natural interest in this fledgling program. “What Bethany and Amanda have done is really exceptional,” Panther Coach Sarah Raunecker said. “They’re doing a great job. It’s exciting for Middlebury to have MUHS volleyball, and it’s very popular.”

The preseasons of both teams this fall coincided, so there was the opportunity for considerable interaction. The Panther players attended a number of practices in August, providing instruction and mentoring to the high school athletes — as Amanda put it, “modeling what they can be.”

The college team came to the high school homecoming gaming game against CVU, and the high school players returned the favor by attending college games. As Coach Raunecker said, “The connection to community is important.”

Middlebury College junior Kelly Ferraro commented in an email on the Tiger players’ “positivity and ‘coachability.’ I’m not surprised they were able to improve so much this year.” Her teammate Caitlin Smith, a sophomore, discussed how “eager the athletes are to learn. I loved seeing their encouragement of one another and optimism from the start.”

Last Friday I ventured into the beautiful new rec gym on Creek Road to observe some pick-up volleyball in an “open gym” session (the MUHS gym does not physically accommodate volleyball at this point). There were about 25 athletes there, having a good time, mostly 9th-grade girls I was told, and coaches Morrissey and Young.

I conversed with Ronan and Emma, the progenitors, and also Sienna Rubright and Aven Francovic. They conveyed their satisfaction at what had been accomplished so far and their optimism for their future, and how much they love the sport.

Watching from the door were town Recreation Director Dustin Hunt and his associate Scott Bourne. I asked them their impression of this local volleyball development. Dustin answered immediately, “Definitely a good thing! They’re in it for the long haul.”

Scott concurred, adding how much he appreciates how “respectful” the athletes are and how much they value “sportsmanship.”