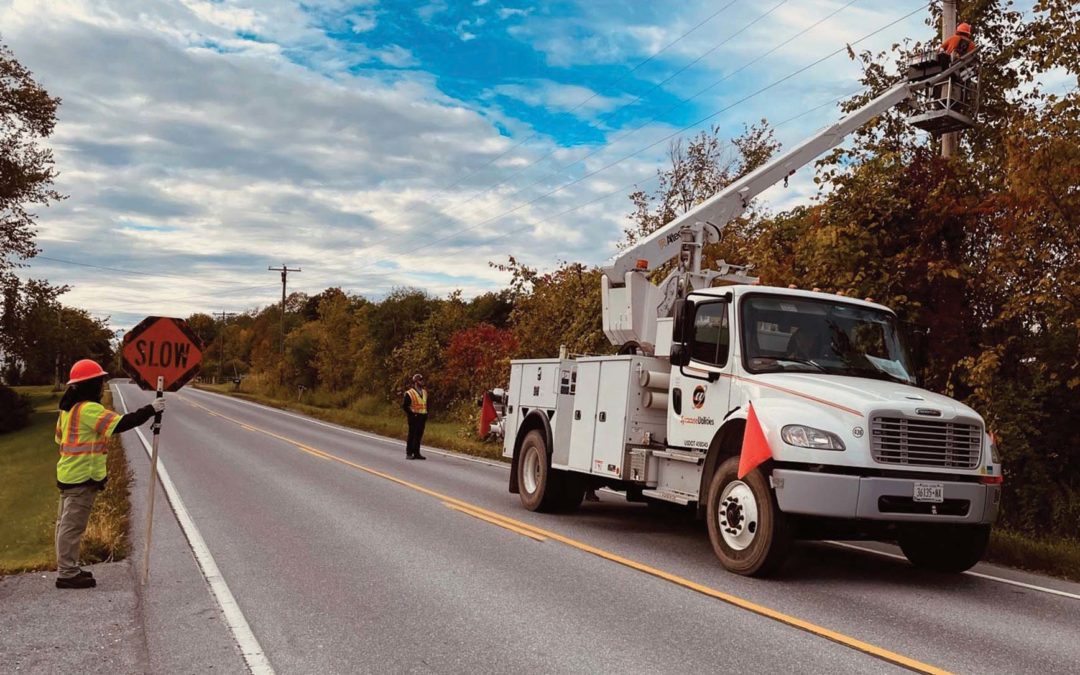 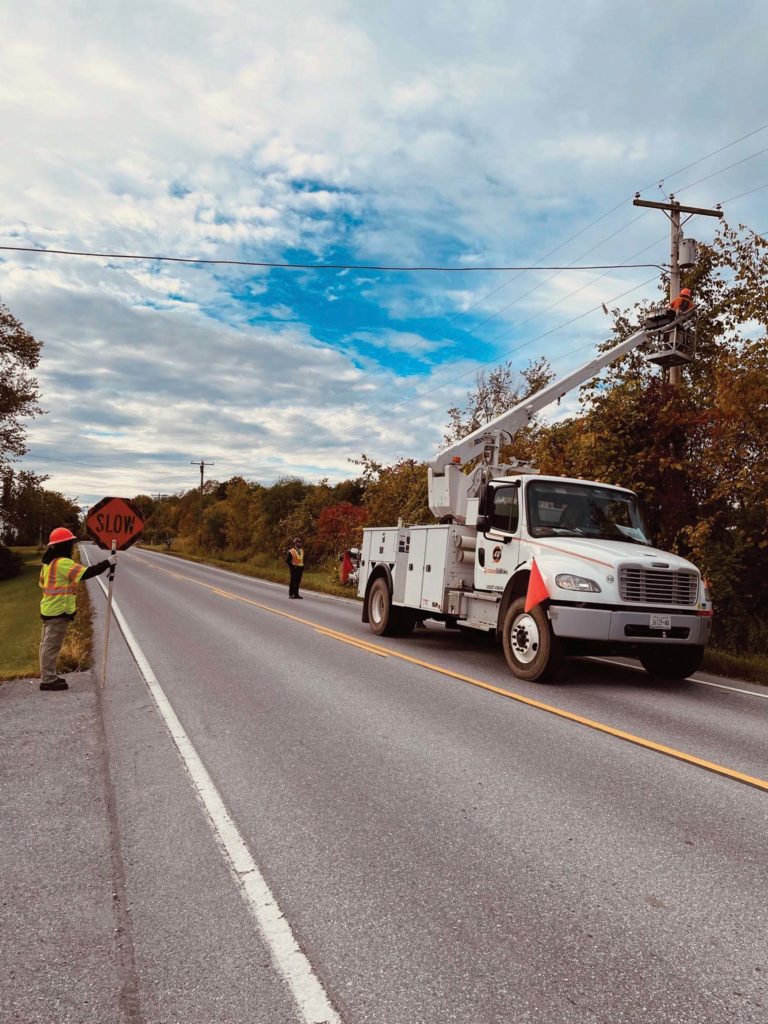 THIS CREW IS attaching fiber-optic lines to telephone poles in Cornwall on behalf of Maple Broadband, the nonprofit entity charged with bringing high-speed internet to unserved and underserved areas of Addison County. Maple Broadband’s efforts are done in partnership with Waitsfield Champlain Valley Telecom.
Photo by David Dodge

ADDISON COUNTY — The nonprofit internet provider Maple Broadband began work in early October stringing fiber-optic lines that will bring high-speed service to up to 1,400 underserved or unserved households in portions of Cornwall, Leicester, Middlebury, Orwell, Salisbury, Shoreham and Whiting. That comes thanks to an $8.7 million grant the organization got in July.

Now a $9.1 million September award from the same source, the Vermont Community Broadband Board, to Maple Broadband’s partner, Waitsfield Champlain Valley Telecom (WCVT), will do the same for up to 2,000 of WCTV’s customers in parts of Addison, Bridport, Ferrisburgh, New Haven, Panton, Waltham and Weybridge.

Ellie de Villiers, Maple Broadband’s newly hired executive director, said both those grants came from the $116 million of American Rescue Plan Act money the Legislature earmarked in 2021’s Act 71 for the Vermont broadband board to use to expand broadband service throughout rural Vermont.

De Villiers, who volunteered at Maple Broadband before becoming its first employee, points out that the 20 Addison County towns jointly served by Maple Broadband and Waitsfield Champlain Valley Telecom have now received $17.8 million from the state broadband board. That’s about 15.3% of Act 71’s total funding.

She credits the public-private partnership of Maple Broadband and WCVT for helping obtain the grants and for embarking on what will be a two-pronged expansion effort by next spring, when WCVT also starts stringing new fiber-optic lines to replace its slower Digital Subscriber Line (DSL) service.

“It’s just more data to show that this partnership is bringing more money to Addison County faster than other places because we have two entities applying for grants, and building, concurrently,” de Villiers said.

While Maple Broadband numbers 20 towns as members in its network, de Villiers said WCVT already serves all or almost all of seven of those towns and substantial portions of three more, plus has a small presence in three other communities.

Maple Broadband is thus focusing on designing and building a network on the 13 towns in which WCVT has either no or a smaller presence, de Villiers said. The nonprofit used its initial funding, including donations from member towns and other grants, to hire a firm for preliminary scoping and final design work and bring aboard a construction firm to build out the network.

For instance, de Villiers said Starksboro is a fully WCVT town, and WCVT will build, operate and service its fiber network. But Orwell is a 100% Maple Broadband town, and the Maple Broadband will be responsible, through the companies it hires, for building out its fiber-optic network.

But when Maple Broadband’s network is built in Orwell and elsewhere, its partnership with WCVT will fully kick in, she said: WCTV will maintain it and service the nonprofit’s customers.

“If something breaks, they will fix it. We’ll pay them for that,” de Villiers said. “And then when someone goes to place an order, when they interact with customer service, someone will answer the phone as Maple Broadband, but they will be sitting in the Waitsfield offices and employed by the Waitsfield company.”

Christine Hallquist, executive director of the Vermont Community Broadband Board, praised that level of cooperation in a press release that announced WCVT’s $9.1 million grant.

“The Maple Broadband relationship with WCVT is an example of the public-private partnerships that will result in every Vermonter getting the opportunity to connect to reliable high-speed Internet. The VCBB is excited about the forward progress that Vermont is making in terms of universal service. This progress is made possible by the partnerships like this one,” Hallquist said. 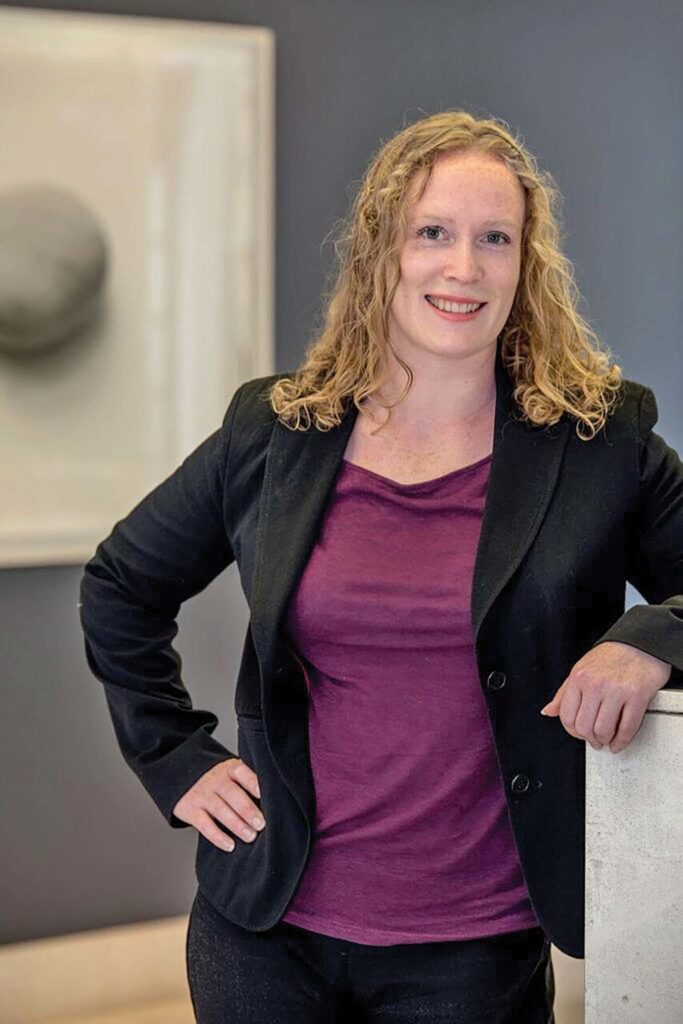 MAPLE BROADBAND HAS recently brought on former volunteer Ellie de Villiers as its executive director to oversee and coordinate its efforts to bring high-speed internet to unserved and underserved areas in Addison County.
Photo courtesy of Maple Broadband

Still, de Villiers said, challenges remain. Maple Broadband has projections on how many of the 1,400 potential new customers of its first buildout phase will sign on — at $70 a month for 50 megabytes per second (mps) upload and download speed or $90 for 100/100 mps. (The network can offer speeds of up to a gigabyte for $120/month.)

But she acknowledged those projections could also be called guesses.

And those sign-ups are a key part of the financial picture. Maple Broadband is a Communications Union District (CUD) under Vermont law, defined as an organization of two or more towns that join together as a municipal entity to build communication infrastructure. It cannot tax residents, but can bond for funding, seek private loans and continue to ask for support from its member towns.

The more revenue it can obtain from customers, the better, de Villiers said, as capital investment is needed for more buildout.

Also, not all those households that Maple Broadband’s network will pass can afford high-speed internet. De Villiers said not all customers will be asked to pay full freight.

“We are still working through the details of that, but we recognize that this is a challenge, and if a network goes outside someone’s house, and they cannot afford it, the job is not done,” de Villiers said, adding, “We don’t have the details worked out, but we know we have to have them worked out sooner rather than later.”

Officials from both entities remain confident in the prognosis.

Eric Haskin, president and CEO of WCVT, said the grant money would “go a long way” to speeding up broadband expansion in Addison County.

“This grant will definitely help bend the high cost associated with building broadband to some of our most rural communities and customers,” he said.

And Maple Broadband Board Chair Steve Huffaker said he was happy to see fiber-optic line finally being strung after many months of planning and work.

“We are excited to start bringing services to our member areas in Addison County and are confident that this partnership with WCVT will help us to roll out fiber faster at a price that benefits residents,” he said.