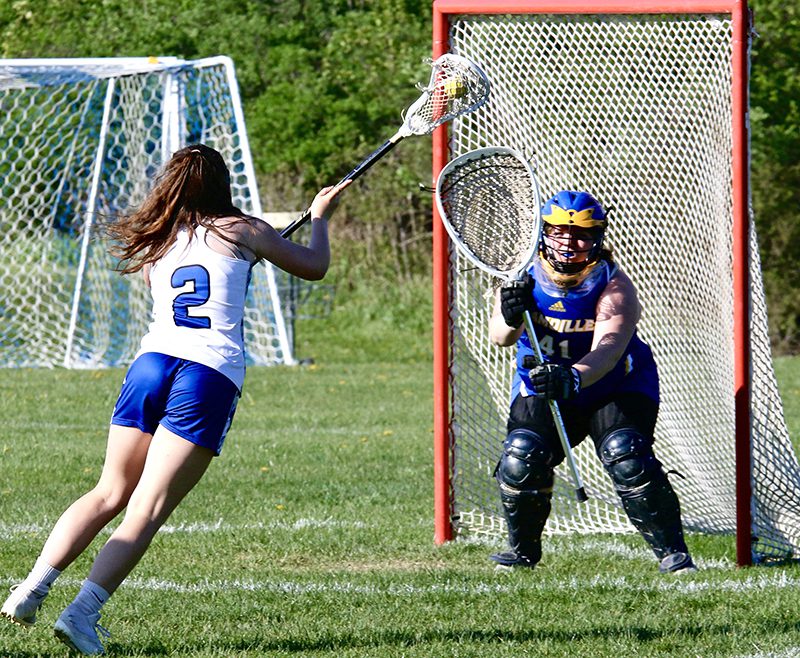 TALKING WITH MUHS boys’ lacrosse coach Matt Rizzo this spring he made the point that sometimes an athlete just has to win one-on-one. This shot captures one of those battles, MAV senior attacker Halle Huizenga vs. Lamoille goalie Jacie Walker. Walker made this save, but Huizenga scored later in the Commodores’ win. Independent photo/Steve James
By Andy Kirkaldy

VERGENNES — The Mount Abraham-Vergennes girls’ lacrosse team stumbled to only its second loss of the season this past Thursday. Undefeated Division II title contender Hartford thumped the visiting Commodores, 16-3. Only Txuxa Konczal-Doherty, Nell Harvey and Annie Dufault found the net as the Hurricanes limited MAV to eight shots on goal, while goalie Carley Cook made six saves.

To be fair, MAV was shorthanded due to an academic scheduling conflict for a couple players, but Coach Marikate Kelley was looking for improved play when her team, which remained in second place in D-II after the setback, took the field on Friday against Lamoille. 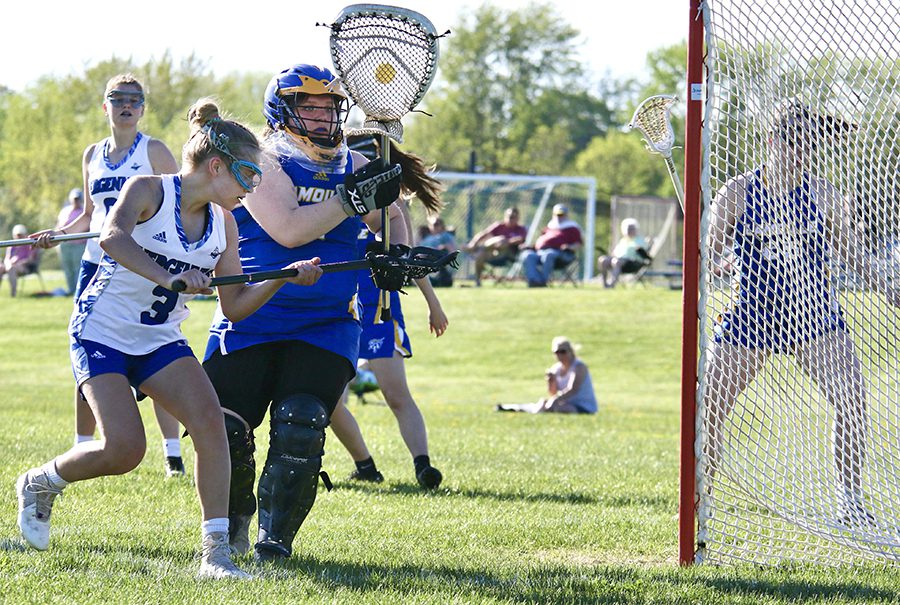 LAMOILLE GOALIE JACIE Walker got to this groundball before Commodore Emerson Rice, but the MAV girls prevailed in most of the groundball battles in their 20-7 victory on Saturday.
Independent photo/Steve James

Fortunately, Kelley said that’s what she saw in the Commodores’ 20-7 victory.

“There were a lot of things we talked about that game that we started right from today to work on,” Kelley said on Friday. “And slowly we started to figure those things out and execute them. The second half we executed that stuff pretty well.”

Specifically, she said the team started connecting passes better in transition, and also positioning themselves better to put more pressure on their opponents when moving the ball up the field. Against Hartford, Kelley said, the Commodores were limiting each other’s options by not making good, aggressive cuts to get open down the field.

“Part of what we had trouble with is everybody wanted to be the back pass on our transition, and nobody took off,” she said. “So we tried to get people chugging up the field.”

What Kelley also called “the mental piece” worked for the Commodores. They pulled together, shrugged off Thursday’s setback and started strong against Lamoille, with five goals in the first 7:39 — two from Elena Bronson and one apiece from Emerson Rice, Reese Gernander and Anna Stillwell, with Bronson and Rice assisting each other on the first two strikes. 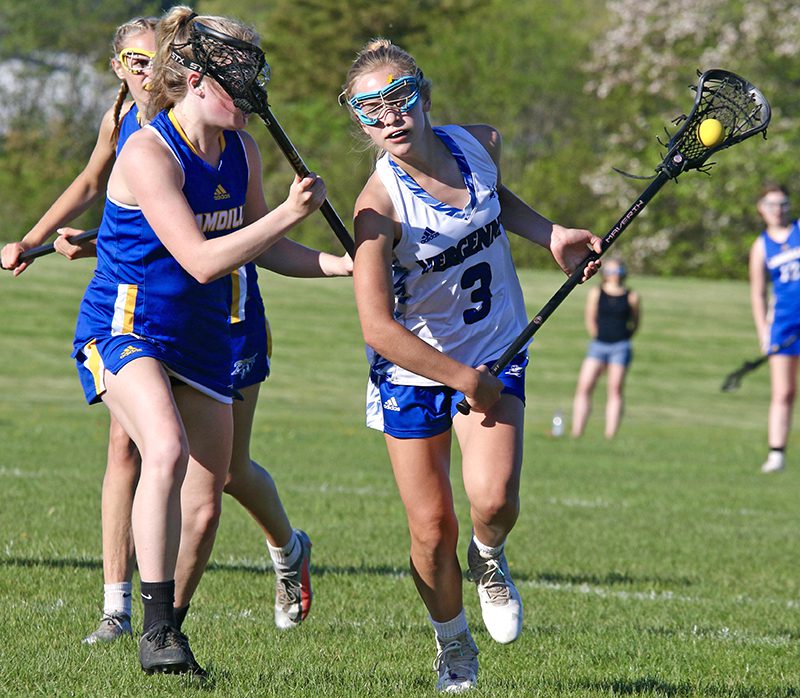 Lamoille did regroup and play MAV on closer-to-even terms for the rest of the first half, which ended with the Commodores up, 11-5. Lamoille sharpshooter Phoebe Loomis proved to be a handful. Loomis was not only elusive in the offensive fan, but also adept at picking corners. She scored four first-half goals and set up the fifth, by Renny Cota.

But the closest the Lancers came was four goals, at 6-2, as Bronson sparked MAV in the first half with four goals and two assists, Rice scored twice and set up a pair, Stillwell netted a pair, and Halle Huizenga and Doherty-Konczal added one apiece.

It took a little less than five minutes of the second half for MAV to send the game into running time with the 10-goal mercy rule. Rice scored one and Dufault scored twice, one with an assist from Rice, and it was 15-5 at 20:10.

Dufault erupted for three more goals in the second half to finish with a team-high five, Rice added another goal and assist to finish with four goals and three assists, Stillwell finished with three goals and an assist, and Gernander scored again to complete a hat trick. 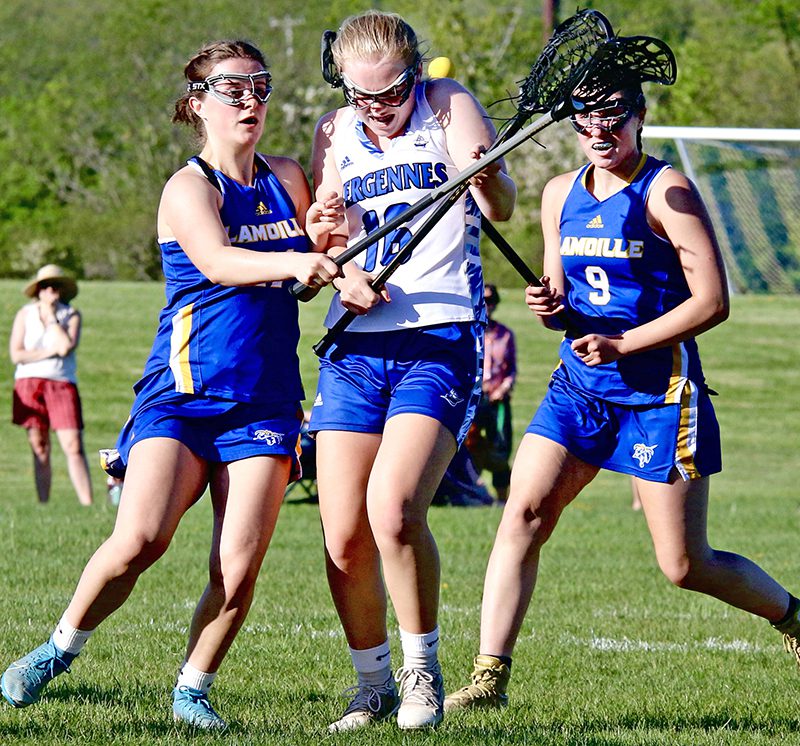 TWO LANCERS MANAGED to knock the ball away from Commodore Annie Dufault on this play, but they had trouble stopping her most of Saturday’s game. Dufault scored five goals as the MAV girls won, 20-7.
Independent photo/Steve James

Bronson’s four goals and two assists and Huizenga’s goal came in the first half before they had to leave to honor an academic commitment; they also missed the Hartford game. When Lamoille did get a shot off it was a high-percentage effort, and MAV goalie Carley Cook made one save.

Kelley believed the Commodores were crisper in the second half as they began to adapt to what they were being asked to do. They have challenging games on the horizon, including against a 9-1 D-I St. Albans team at home on Monday before they host D-II Colchester on Tuesday. Kelley said MAV will need to maintain that focus.

“We’ve got some tough games coming up,” she said. “We want to get ready for those tough games by making these adjustments and doing those things in every game, no matter who we’re playing,” 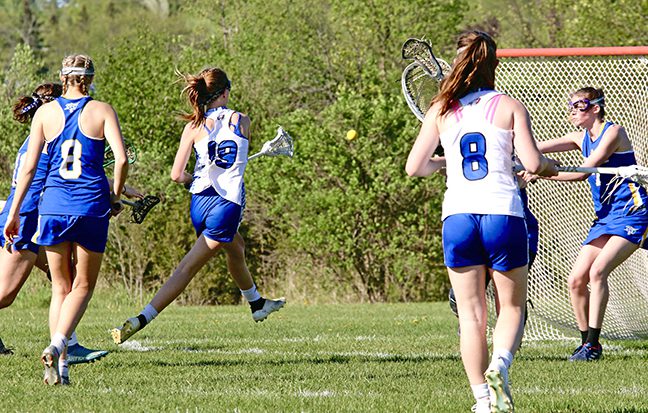