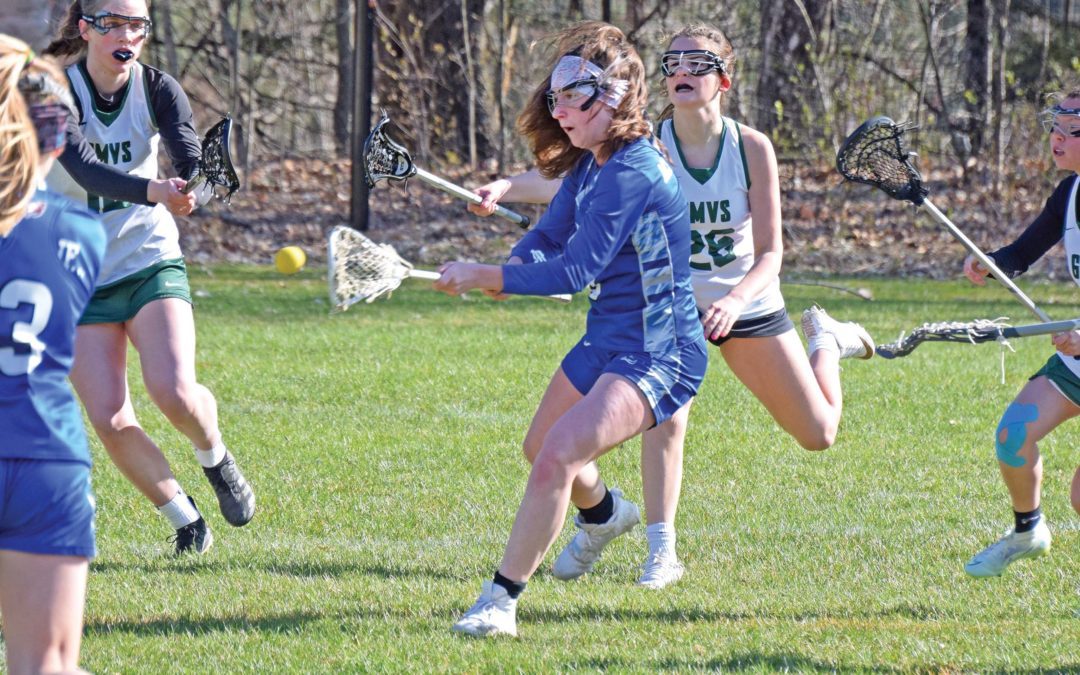 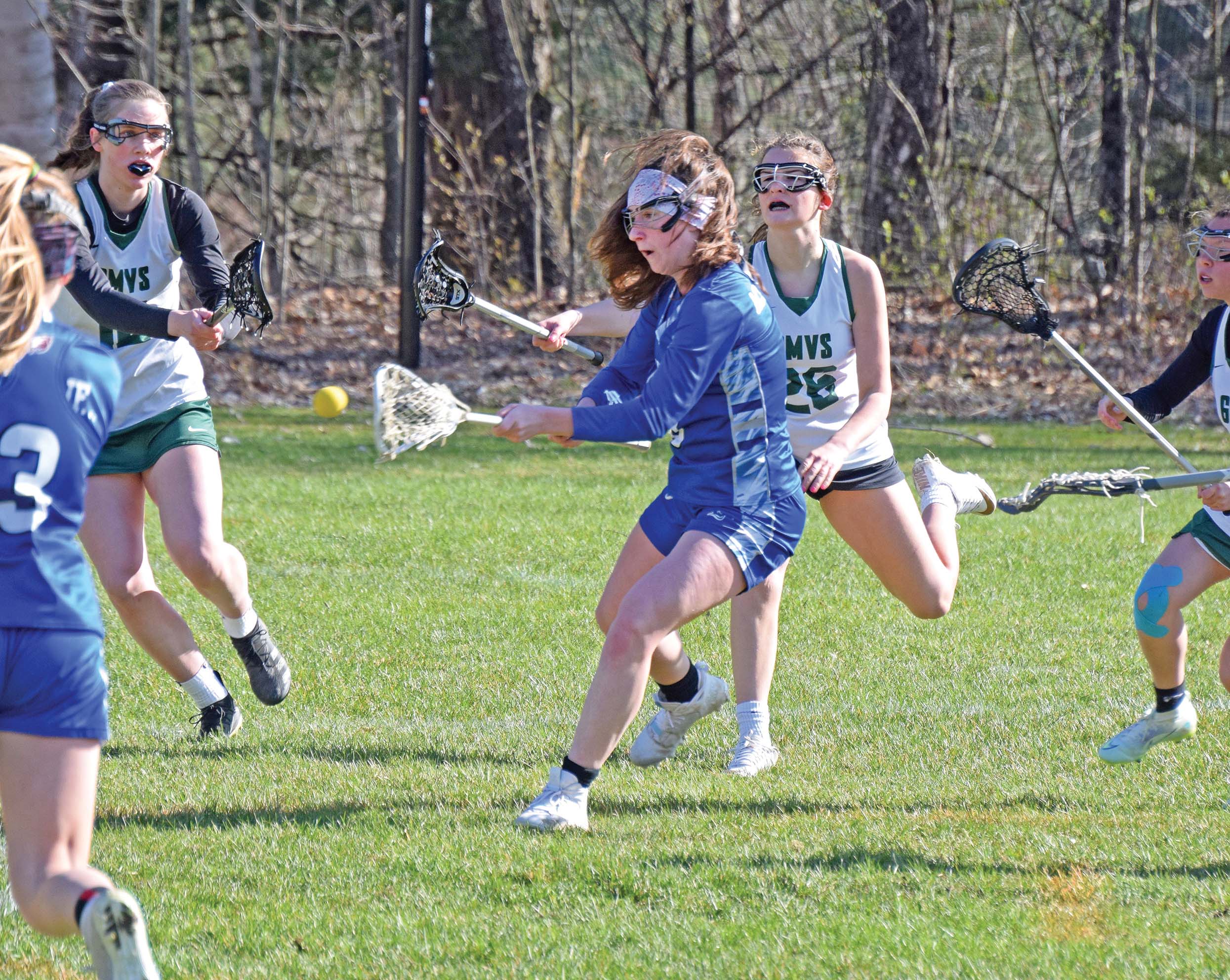 SENIOR MIDDIE ELENA Bronson fires a shot on goal and scores during the MAV girls’ lacrosse team’s 15-2 win on April 28 at Green Mountain Valley. The victory was the first of three straight that pushed the Commodores’ record to 4-1. Photo by Vicki Wright Bronson
By Andy Kirkaldy 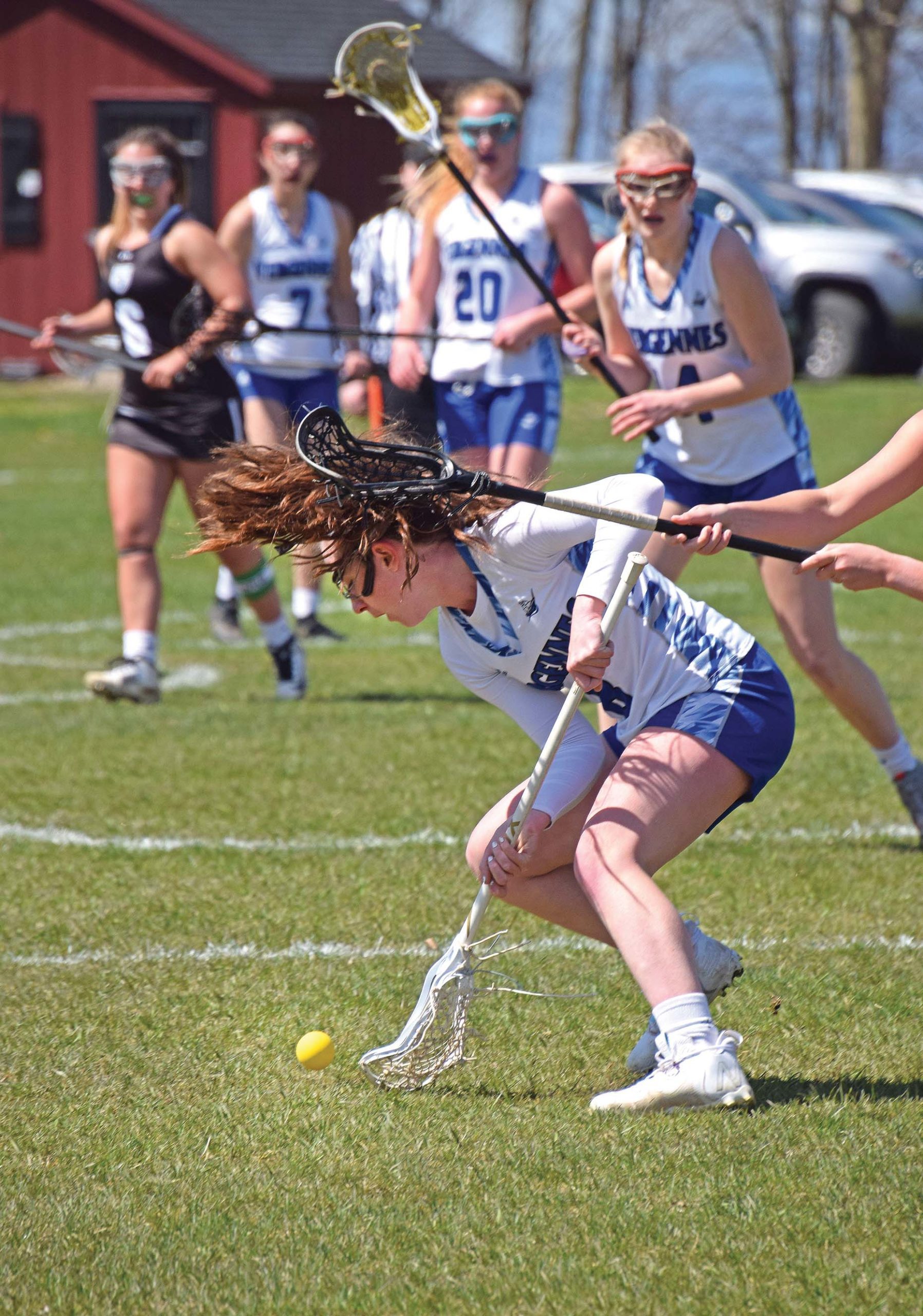 VERGENNES — The Vergennes-Mount Abraham cooperative high school girls’ lacrosse team bounced back from its only loss of the season — to Division I title contender CVU on April 18 — with three big wins since, including Monday’s 7-3 victory over D-I Essex at VUHS.

On April 28, the Commodores coasted at defending D-II champion Green Mountain Valley, 15-2, and two days later they knocked off another D-II foe, Stowe, 14-1, in a game at Mount Abe.

The Commodores moved to 4-1 despite returning only four regulars from the 2021 semifinalist squad after the decision of several seniors to forego their last season.

On Monday the Commodores throttled Essex with a rebuilt defense in front of Cook, even with Bronson missing the game with an illness and Guillemette out with an injury suffered last week that makes her status for the season uncertain.

Doherty-Konczal, who is aiming for her sixth title to add to her 2019 lacrosse and four Eagle D-II field hockey crowns, said chemistry and talented underclassmen have sparked the strong start.

“We had eight seniors (who could have played this season), and now we have three, and that’s obviously a big loss. But I think all these younger kids are really stepping up,” she said. “We lost Cassandra against GMVS. We’re hoping she’ll be back. But I think this team, we have such a strong team dynamic that I think we’ll be able to pull through. I’ve never seen a team that is more positive with each other.”

She noted even without Guillemette and Bronson the Commodores stifled Essex. Only CVU has scored more than three goals against them.

“Our defense is solid this year,” Doherty-Konczal said. “We’ve been able to hold teams to low-scoring games.”

With Huizenga and sophomore Emerson Rice moved back from attack to shore up the midfield, Essex had trouble moving the ball up the field. 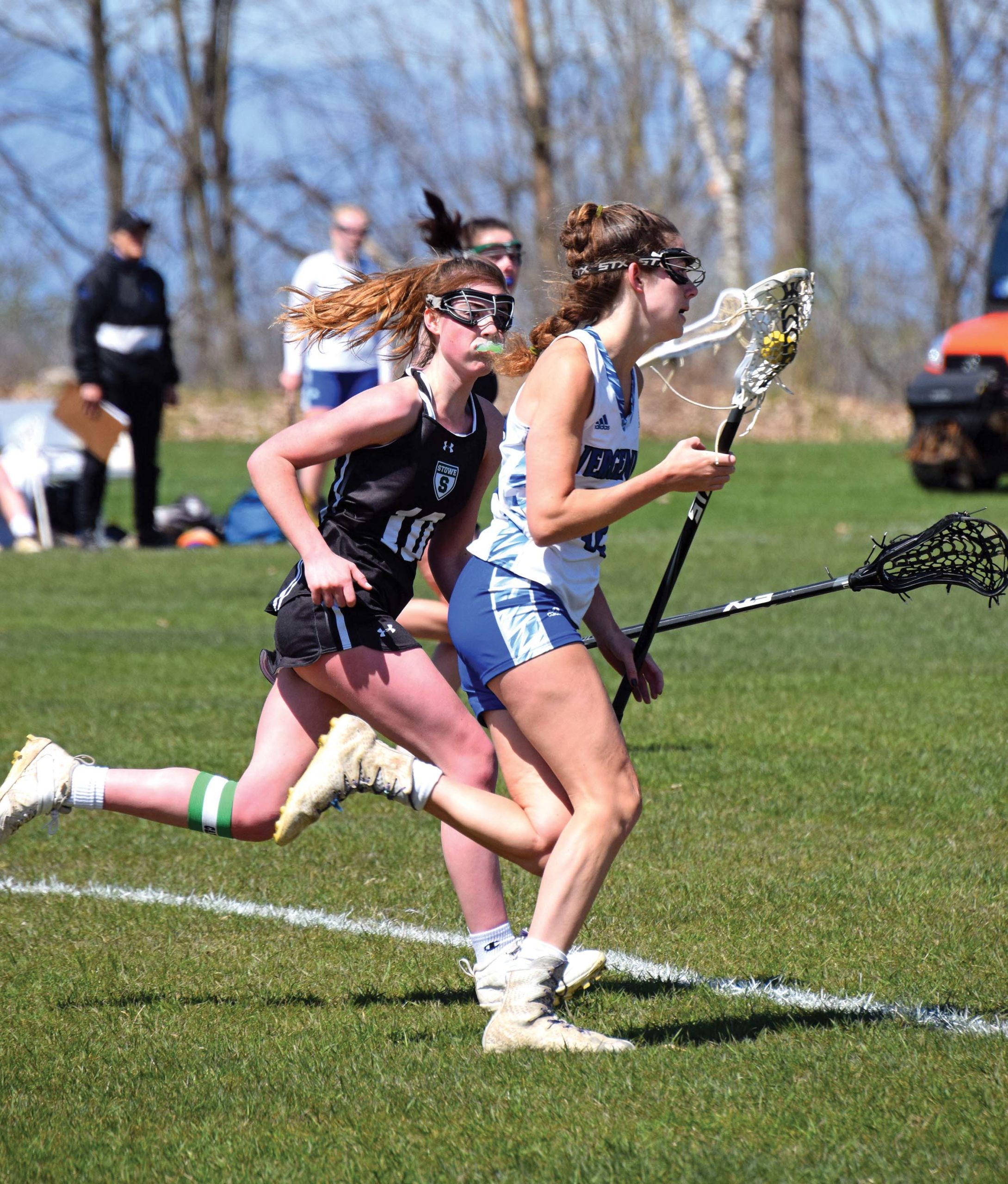 SENIOR MIDDIE TXUXA Doherty-Konczal races past a Stowe player during the Commodore girls’ lacrosse team’s 14-1 Saturday win in Bristol. Doherty-Konczal is one of two players remaining from its 2019 D-II championship title.
Photo by Vicki Wright Bronson

Offensively, MAV took a 3-0 lead in the first 5:09. Junior attacker Reese Gernander scored the first goal when her shot bounced off the back of Essex goalie Sierra Harris and in; it might have also hit a defender on the way in. Harris overall was strong, with nine saves.

At 21:54 the Commodores took advantage of one of the many turnovers they forced to score in transition. Rice cut to goal, took a feed from the right from sophomore attacker Anna Stillwell, and converted from close range.

Gernander made it 3-0 at 19:51, swooping in from the right side and backhanding a low shot home. Ten minutes later Huizenga curled from behind the net on the right and beat Harris, and Rice made it 5-0 at the break with a goal at 1:05.

Essex really had just two good chances in the half. Cook stoned Hornet attacker Olivia Bergeron on a curl move midway through the period, and in the late going Addison Stratton was awarded a free position at the center of the attacking fan, but Doherty-Konczal checked away her shot attempt.

Essex broke through in the second half’s fifth minute, when Abigail Lacross whipped home a lefty shot into the lower right corner from eight yards out.

Doherty-Konczal restored the five-goal margin three minutes later, cutting into the fan and taking a Huizenga pass from the right and depositing the ball into the lower left corner. Harvey stepped up into the attack and finished high to make it 7-1 with 11:01 to go. Essex got late goals from Dylan Line and Ava Spooner.

Cook made back-to-back close-range stops midway through the second half on Spooner and Carlota Jensen. 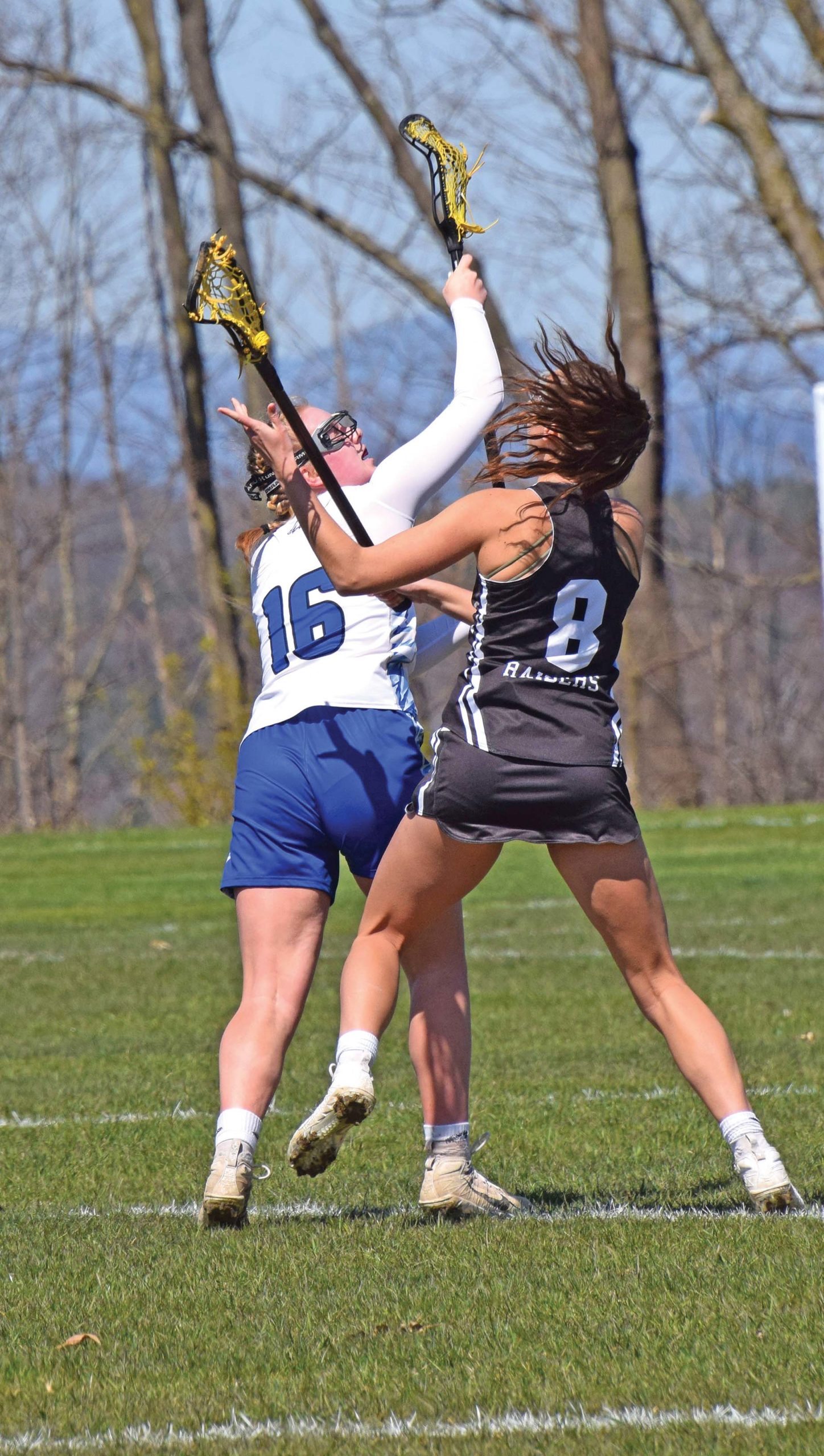 SOPHOMORE ANNIE DUFAULT competes with a Stowe player for the draw during the VUHS-Mount Abe girls’ lacrosse team’s victory in Bristol on Saturday, one of three in a recent winning streak.
Photo by Vicki Wright Bronson

MAV is changing tactics to take advantage of its athleticism, including aggressively marking up while trying to prevent the other team from clearing its own end, “riding” in lax lingo, and installing variations on its zone despite the team’s youth.

Kelley praised the Commodores for their ability to adopt those tactics, and to switch positions while missing two starters, notably the work of Huizenga and Rice at midfield.

“They played a pretty smart game,” Kelley said. “We made some adjustments.”

In Saturday’s 14-1 victory over Stowe at Mount Abe, Huizenga and Gernander led with three goals apiece. Bronson, Rice and Stillwell each scored twice, Bronson had two assists, Harvey and Dufault added a goal apiece, and Cook made five saves.

After the Essex result on Monday, the Commodores were feeling optimistic.

“We’re only up from here. We’re a young team. We’re still working out some kinks,” Doherty-Konczal said. “We’re going to be a strong team, and we’re super-duper versatile.”