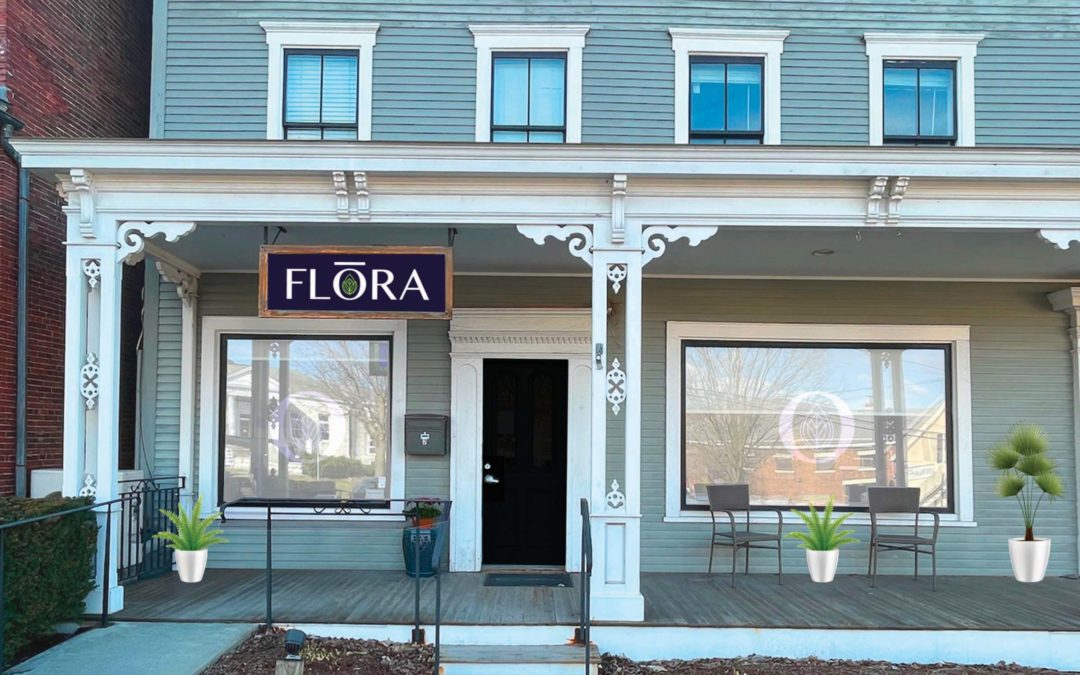 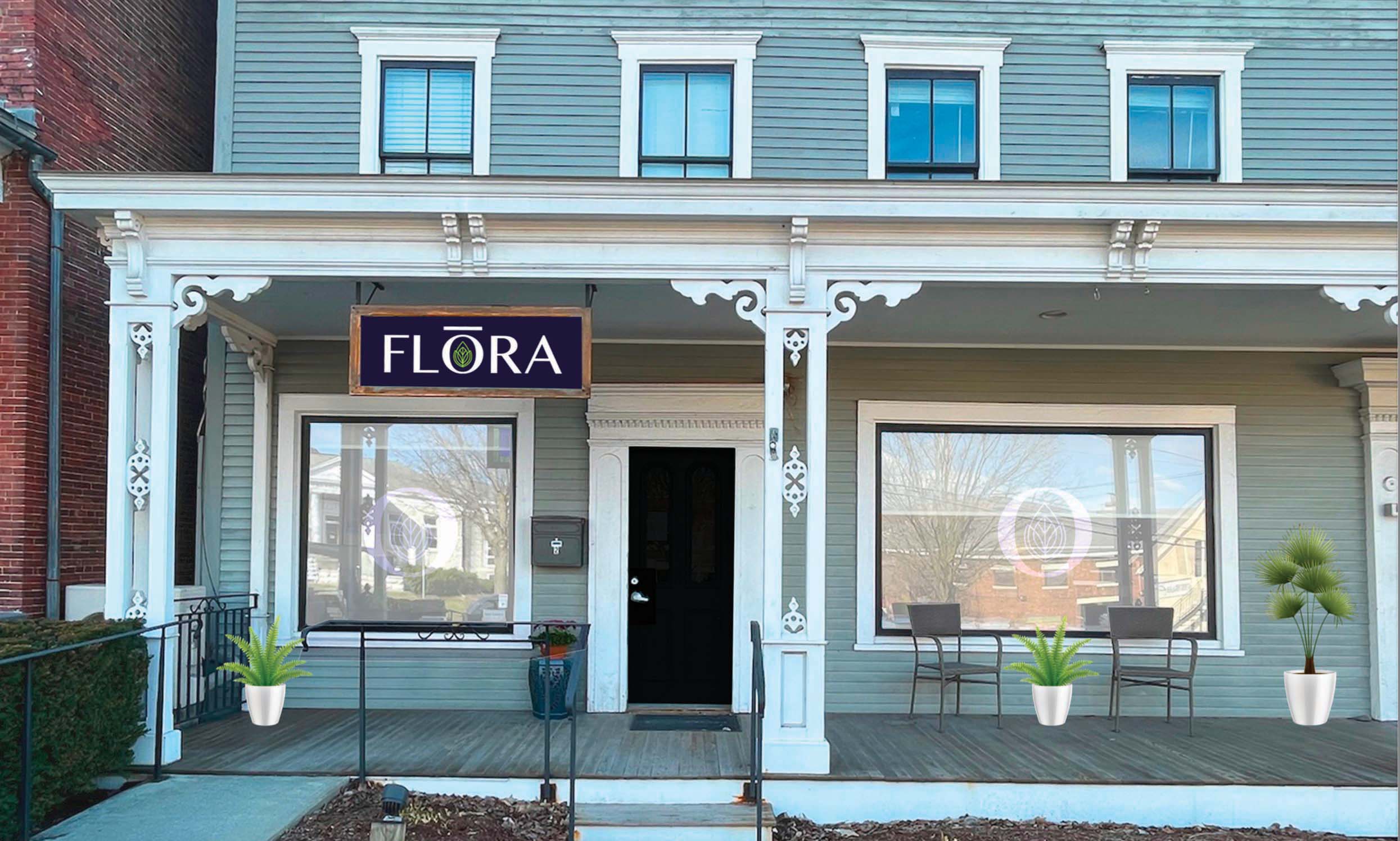 TWO LOCAL MEN have filed an application to establish a cannabis retail store called FLŌRA at 2 Park St. in downtown Middlebury. This artist’s depiction shows how they hope to present the storefront.
By John Flowers

MIDDLEBURY — Middlebury voters’ decision last year to open the town’s doors to recreational cannabis ventures has led to two such applications being filed this month.

This week comes news of an application for a cannabis retail store at 2 Park St. in downtown Middlebury that could someday carry recreational cannabis cultivated by Mr. Z. The store, called “FLŌRA,” would sell cannabis flower and an assortment of related products, including tinctures, concentrates, edibles, beverages and topicals.

FLŌRA is being pitched by two Middlebury residents: Michael Sims and Dave Silberman, both of whom have either entrepreneurial or legal background in the cannabis industry.

“A lot of what I do naturally, every day, carries over to what I’ll be doing for the store,” Sims said.

An attorney by trade, Silberman provided input to state legislators on Vermont’s new recreational cannabis law (Act 164, passed in 2020 and amended in 2021), which sets up a regulated adult market for the substance. Act 164 in part created the Vermont Cannabis Control Board, an independent commission that’s been asked to “safely, equitably, and effectively implement and administer the laws enabling adult use and medical use.”

Silberman now represents many entrepreneurs seeking business opportunities in the cultivation and/or sale of recreational cannabis. State law allows licensed cannabis retailers to begin selling on Oct. 1, and that’s the targeted opening date for FLŌRA, according to the applicants.

“As we were talking, it became clear to both of us that it would be better if we were partners on this instead,” Silberman said, conceding, “I never thought I would get involved in this way.”

The two partners filed their FLŌRA store application with Middlebury’s planning office earlier this month. The 2 Park St. location is in Middlebury’s Central Business District. The town’s Development Review Board is being asked to approve a change of use designation for the site — currently occupied by Deppman Law PLC — from office to retail, in order to pave the way for FLŌRA. The DRB is slated to take up the application on May 9.

Plans on file with the town call for only “minor cosmetic exterior changes” to the building, including glazing windows, re-staining the front porch/deck, removal of two non-weight bearing walls, reconfiguration of interior doorways, refinishing floors and painting. Silberman and Sims, in their project narrative, said they want the store to convey a “bright, safe, welcoming space for locals and tourists alike to purchase high-quality, lab-tested cannabis and cannabis products from professional staff members trained to educate customers on safe consumption practices and the varied effects of different cannabinoids (such as THC, CBD, CBG and CBN), as well as to meticulously verify that 100% of customers are at least 21 years old.”

“It’s not a head shop,” Sims stressed of FLŌRA. “It’s not a ‘dark, smoky, neon-signs, bongs everywhere’ kind of place. It’s an upscale, more like an ‘Apple Store’ feel, with great customer service and a nice, airy open feeling.”

“We are going for a discreet outside appearance,” Silberman added.

A customer entering the store would be greeted by a staff member to check the customer’s ID to confirm their age. Underage persons, and anyone visibly intoxicated, would be politely denied entry, according to the FLŌRA business plan.

Once checked in, customers would be offered store-provided iPads featuring a product menu and educational materials. While a selection of store-branded merchandise might be offered, no cannabis products would be displayed in this waiting area, according to the narrative.

Beyond the waiting area, the customer would be admitted to a physically separated, secure sales floor, where there would be additional sales staff, sometimes referred to as “bud-tenders,” offering guidance on available products. Customers would exit the store using a separate secure door leading back to the check-in area, near the main front entrance. Each customer would be provided a safety information flier at checkout, as mandated by the Vermont Department of Health.

FLŌRA would also be equipped with a secure space reserved for inventory storage, packaging, an employee break room, and employees-only bathroom and the manager’s office, according to the narrative.

Customers would be barred from using store products on premises.

Silberman said all cannabis in inventory would be kept in sealed containers to preserve freshness and prevent odors. Plans calls for installation of a carbon filtration air exchange system “to ensure that no odors will be detectable beyond the property lines,” the FLŌRA narrative reads.

FLŌRA’S neighbors would include the Henry Sheldon Museum of Vermont History, Photoplace Gallery, Cannon Park, and a residence on nearby Mill Street, in addition to other tenants of the building including Dan Freeman Leatherworks and upstairs apartments. Plans call for the store to initially be open six days per week: Tuesday through Saturday, from 11 a.m. to 7 p.m., and Sundays from noon to 5 p.m. Store hours could be adjusted later based on demand.

Silberman anticipates staffing levels will vary based on customer flow, with a minimum of two, and a maximum of six workers on site at any given time. All employees — whom the applicants said would undergo rigorous training — would be paid “well beyond a livable wage,” according to Silberman.

Since he represents a lot of growers and is an attorney, Silberman said he won’t be getting involved in FLŌRA-related transactions with growers. Sims will handle that side of the business.

Silberman holds the position of Addison County high bailiff, which has limited powers — the most notable of which is to arrest the sitting sheriff if that action is deemed necessary. Silberman said he’s using the post more as a platform to speak about criminal justice reform, including legalization of cannabis and decriminalization of all drugs.

He sees no inconsistency in holding his elected position and playing an entrepreneurial role in the cannabis industry.

“The office of high bailiff pays a whopping zero dollars a year; I think the expectation is that the high bailiff does have an outside job,” he said with a smile.

“There is no conflict of interest between the limited powers of the high bailiff and being a partner in a business like this in the manner I am in it,” he added.

The Independent asked Better Middlebury Partnership Executive Director Karen Duguay how she thought a cannabis retail store would fit into the downtown mix.