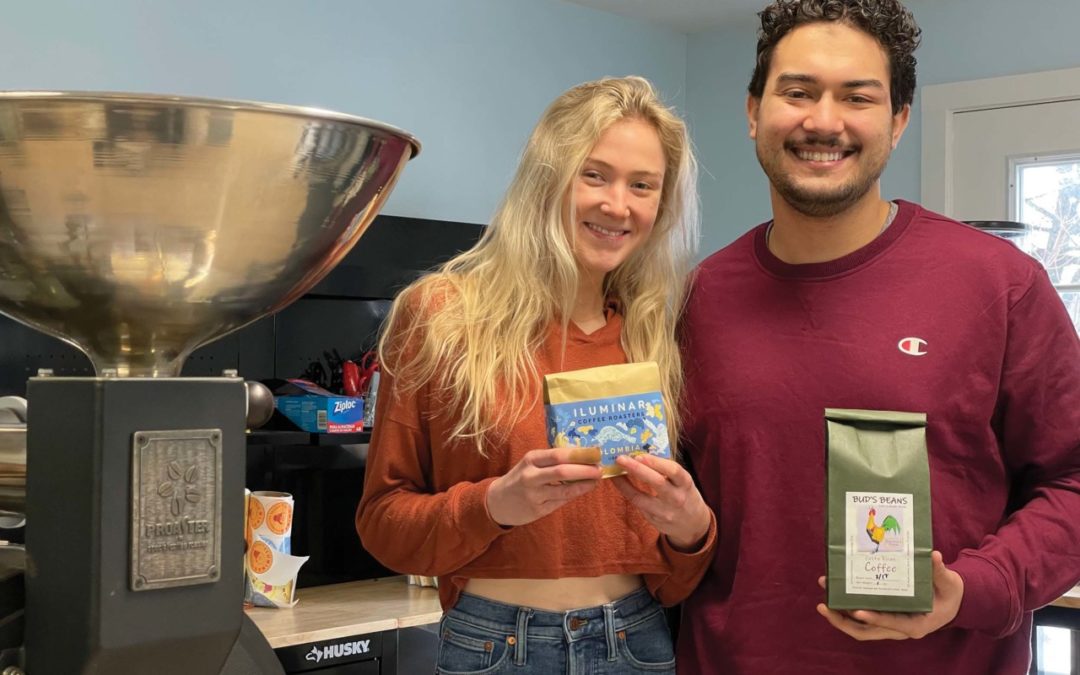 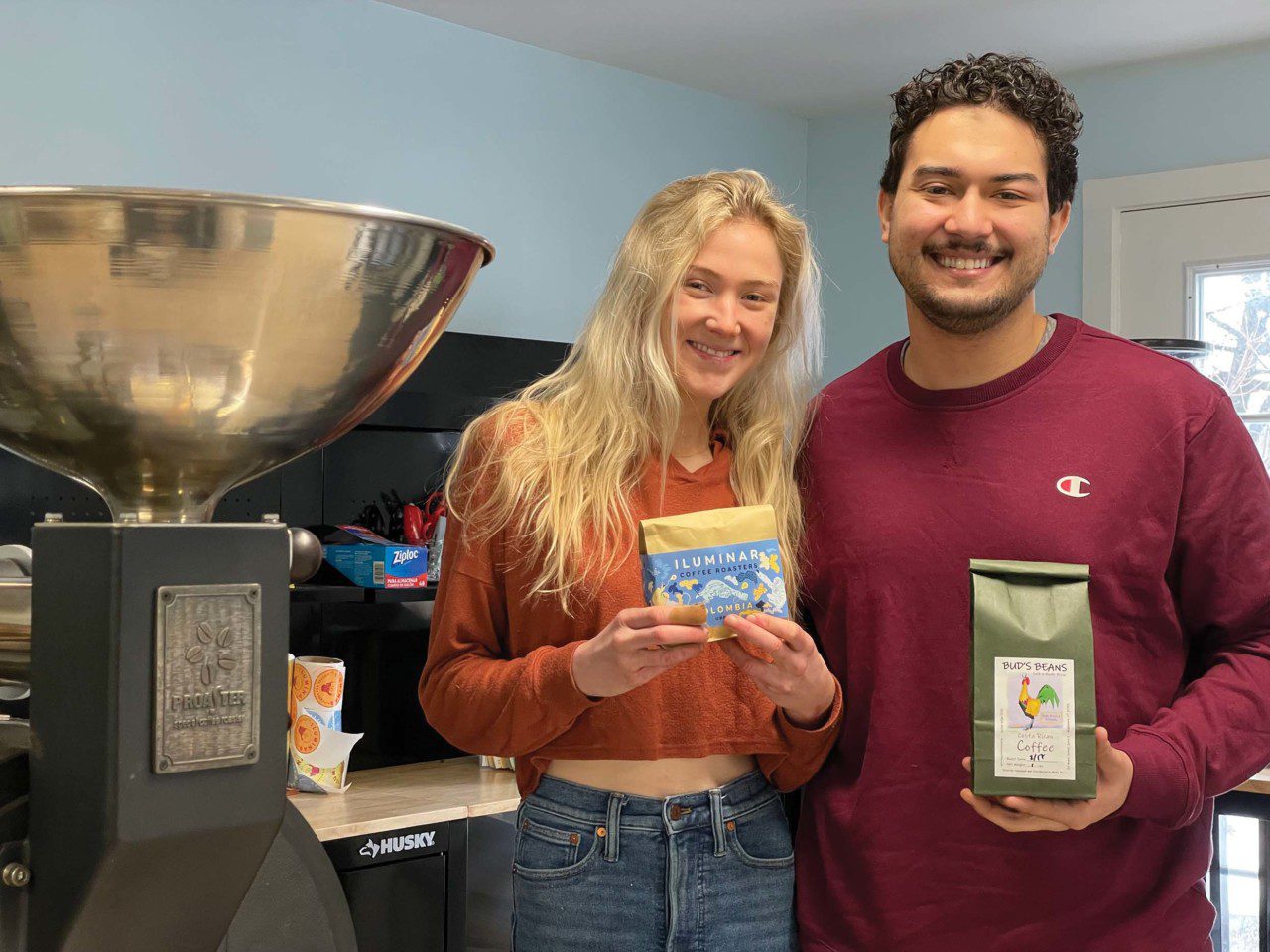 MIDDLEBURY — Coffee. It’s a morning ritual. A pick-me-up. A comfort on a cold, rainy day.

And it’s also a unifier.

Just ask Grace Futral and Daniel Gutierrez. The two Middlebury College students actually met rather randomly over an elevated cup of Joe at Lost Monarch Craft Coffee a couple of years ago.

Now they’re taking their relationship to the next level — as business partners in two coffee ventures.

One of those ventures needs little introduction to Addison County java fans: Bud’s Beans. Established in 2000 by William “Bud” Smith, Bud’s Beans has developed a keen following for its cleverly crafted blends, roasted in tiny batches in a small, nondescript space in Middlebury’s Marble Works business complex. Gutierrez knew all about Bud’s Beans prior to the purchase, consummated on Jan. 20 with the business’s most recent owners, Leah Keller and Brian Carter. Gutierrez had previously used the Bud’s Beans headquarters to make batches of his maiden coffee venture, Iluminar, which Futral has helped propel with her keen sense of marketing.

So when Bud’s Beans came up for sale, Gutierrez and Futral figured it would make sense for them to buy it and consolidate their percolating coffee empire under one roof.

“Originally, our plan wasn’t to buy Bud’s Beans; it was to look for a more permanent space (that Iluminar) could grow into,” Gutierrez said. “I thought about it a bit, we crunched numbers … and decided, ‘This would actually be a great opportunity.’”

Now they’re looking forward to joining a robust contingent of Middlebury College grads who’ve elected to put down roots in the shadow of their alma mater. Futral graduated last year, while Gutierrez still has a year to go before earning his bachelor’s degree. He decided to take the 2021-2022 academic year off in order to focus on the coffee business. Roasting beans seven nights per week while immersed in academics was “absolute madness. There wasn’t really a balance, and I didn’t manage it well.”

The year off has paid major dividends, first with the growth of Iluminar, which Gutierrez founded during his first year at Middlebury. His interest in becoming a coffee merchant began percolating while taking a J-term class called “Midd Entrepreneurs.”

“The idea was simple: provide amazing coffee without breaking the bank and highlight the producers that make our bean juice possible,” reads the company’s mission statement.

Iluminar would have remained just a dream for Gutierrez if not for the guidance and generosity of other Vermont specialty coffee producers. His mentors have included Matthew and Aless Delia-Lôbo, owners of Lost Monarch and Royal Oak here in Middlebury. Gutierrez and Futral have both worked shifts at Lost Monarch during their time at the college.

After spending its first year in a tiny spot in Middlebury College’s innovation hub, Iluminar moved to rented space at Bud’s Beans, where Gutierrez was allowed to roast his coffees a day a week while using space for storage and packaging.

It wasn’t too long before Iluminar outgrew what Bud’s Beans was able to provide, which sent Gutierrez to Uncommon Coffee in Essex.

“It was quite the haul,” he recalled of the travel.

It had become clear after Futral came onboard that Iluminar was ready to move to the next level.

“Grace is amazing when it comes to design and branding,” Gutierrez said. “She did a whole rebranding for Iluminar that exploded things. And that’s what led us to look for a new space.”

The two partners initially talked to Keller and Carter about sharing a larger space for their respective operations. Those talks soon deviated to the outright sale of Bud’s Beans, Gutierrez said.

“When this (business) became available, we couldn’t say no,” Futral said.

Under normal circumstances, taking on a second enterprise would have been an almost impossible task for the two young partners. But they reasoned that Bud’s Beans was already a known commodity and thus needed no foundational work or intensive marketing.

“It’s so nice to walk into a business that’s already so established — like a local legend,” Futral said.

While the future could bring some minor rebranding for Bud’s Beans, Futral and Gutierrez promised “no major changes” to what has been a winning formula.

Just weeks after purchasing Bud’s, the couple bought a larger roaster from Vivid Coffee in Burlington. It’s about twice the size as the old Bud’s beans roaster, according to Gutierrez, and allows for continuous roasting — as many as 50 batches, back to back. The old roaster had to be shut down and cleaned after every couple of roasts.

“One of the beautiful things about coffee roasting and scaling up with bigger equipment and machinery is you’re able to roast so much more, but cut down your time,” Gutierrez said. “We’re now roasting two days a week and still have plenty of time where we can fill out a roast schedule, which frees up our time to do other things.”

It’s been a tasty, hands-on learning experience for the newly minted mocha mavens.

“I’ve always loved coffee, but I didn’t know the internal complexities of it — both in the flavor and in the production of it,” Futral said. “Daniel taught me about it pretty intensely; it was like a crash course.”

A crash course that required a lot of tasting so that Futral’s palate could discern the sometimes subtle flavor notes most prized by coffee connoisseurs.

Business has been great, and it could soon get a lot better.

Gutierrez has been selected to compete at the U.S. Coffee Championships (barista competition) in Boston, April 8-10. It’s a major event at which coffee reputations can be made.

“If I were to place well, it would bring us a huge amount of exposure to the point where we might build this business a lot quicker than we anticipated,” Gutierrez said.

Futral and Gutierrez are OK with expanding, and they want to do it here, where they got their start.

“If we to have to expand, it would be within Addison County,” Gutierrez said emphatically.

And that’s good news for those intent on injecting more youth into one of the grayest states in the nation.

“I always had the perspective that it didn’t really matter where I landed,” Futral said. “I was satisfied going anywhere, and Vermont has become my home for the last five years — especially when I started working in the community, getting off campus.”

More details about Iluminar and Bud’s Beans can be found online at iluminar.coffee and budsbeanscoffee.com.