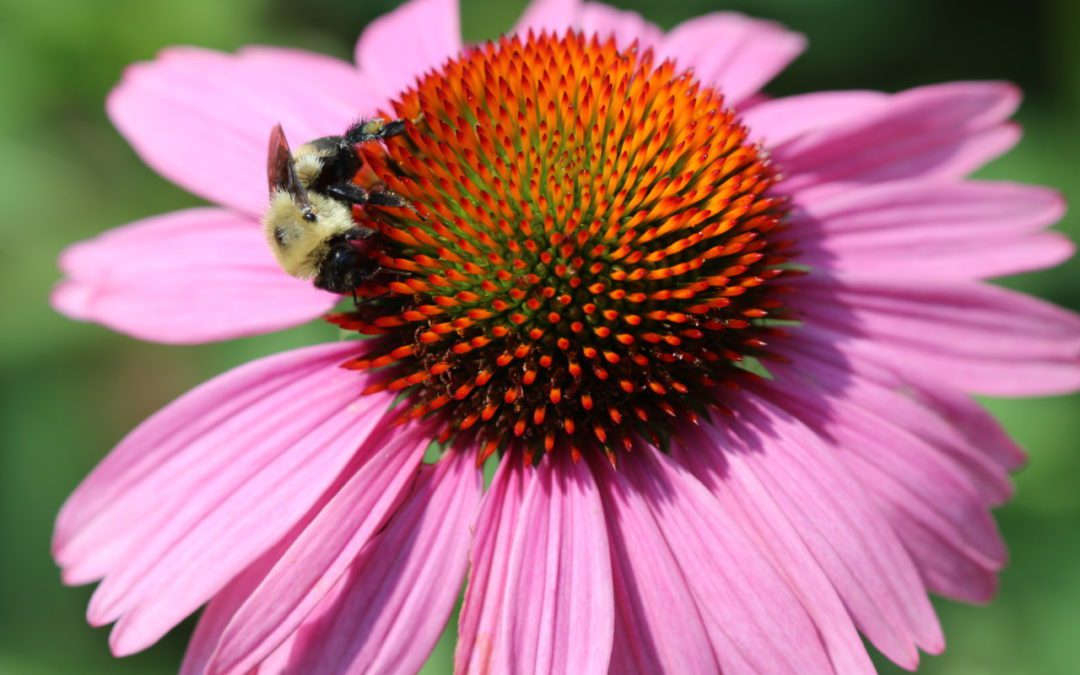 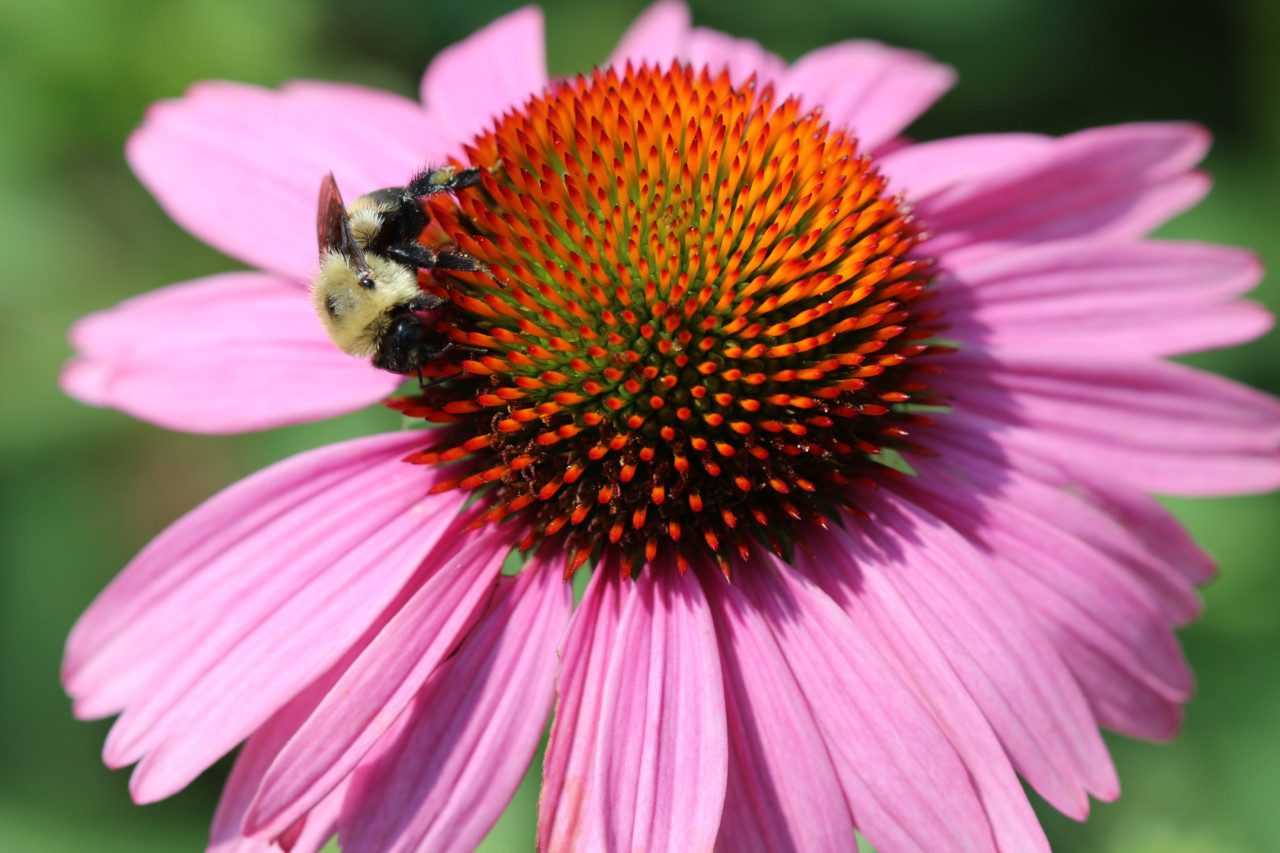 Emily May, who took this photo of a bumble bee pollinating a purple coneflower, will deliver a March 10 Zoom talk on “Planting for Pollinators in Vermont” as part of the Pollinator Pathways of Addison County education series. Photo by Emily May, Xerces Society
By John Flowers

“It’s not just the plants; it’s the whole habitat around the plants.”
— Fran Putnam

WEYBRIDGE — Most people associate pathways as being routes cleared for human travel.

A group of Addison County residents is mapping out a pathway that will be reserved for small, winged travelers essential to the pollination of so much of the fresh fruit and produce that humans depend upon.

Actually building up places for pollinators — butterflies, bees and other insects — to live is more important than ever as their natural habitats have been reduced by human development.

The new organization, called Pollinator Pathways of Addison County, is the brainchild of Bethany Barry and Fran Putnam. Barry had learned about the importance of pollinators during a garden tour of Horsford Gardens & Nursery in Charlotte last fall.

“The woman who was leading this informal tour said, ‘If you can do anything, plant some native plants for pollinators,” Putnam recounted.

It’s a directive that resonated with Barry. She resolved to introduce more pollinator plantings on her own property, but knew a countywide effort could increase the impact manifold. So Barry contacted Putnam — a passionate advocate for reversing climate change — to strategize.

Turns out that Putnam had already been looking at increasing biodiversity on her own property in Weybridge. She had received advice from the Vermont Natural Resources Council on a range of steps landowners can take to stem the dwindling numbers of insects. Addison County also happens to be home base to “Bee The Change,” founded by Dr. Mike Kiernan, which introduces a diverse array of plantings in and around the solar fields. The goal is to support native pollinators like butterflies, hummingbirds, moths and bees that move from plant to plant, “providing a vital and sustainable reproductive pathway for many of the fruits, vegetables, nuts and plants we consume,” according to the Bee The Change website.

As a first step, Barry decided to gauge the interest of Cornwall residents in a pollinator pathway. She posted a blurb on social media, which drew a surprising 15 people to her home last September. Attendees were full of ideas and enthusiasm, and they resolved to make their respective properties more pollinator-friendly, according to Putnam.

The pathway group will also work with garden clubs, conservation commissions, landscaping businesses and gardeners to get them on board with a pollinator planting strategy.

“Small changes could create this pathway across Addison County,” Putnam said. “Other counties and towns will do the same, hopefully.”

The pathway idea gained considerable momentum when Middlebury College sophomore Brett Gilman signed on. Putnam had met Gilman through a climate activism group to which they both belong. Turns out Gilman hails from Wilton, Conn., where the Pollinator Pathway New England (PPNE) organization was established in 2017 by Donna Merrill — who happens to be Gilman’s mentor. Since the founding of PPNE, pathways have been established in more than 287 communities throughout New England, New York, New Jersey and Pennsylvania. Putnam and Barry want to add Vermont to the list, including every town in Addison County, if possible.

Gilman — an organic farmer since fifth grade — urged Putnam and Barry to reach out to PPNE for support. They did, and now there’s an “Addison County, Vt.” page on the PPNE website, which can be found at pollinator-pathway.org.

“They said, ‘You can do this in Addison County. You can join us, and we’ll be the umbrella. Start recruiting people,’” Putnam recalled. “It sounded like a good idea, and we didn’t have to reinvent the wheel.” 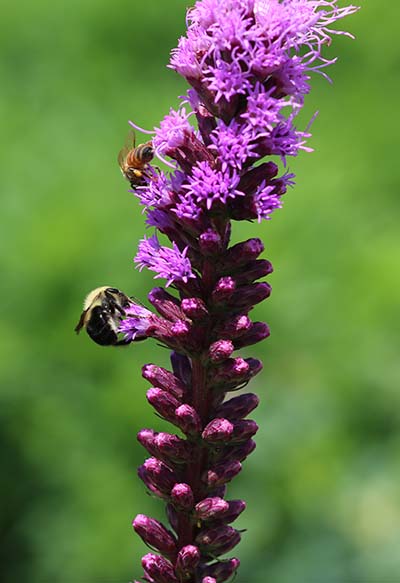 A honey bee and a bumble bee spread pollen around a plant known as a blazing star.
Photo by Emily May, Xerces Society

The group is also lining up speakers for a half-dozen free Zoom events that will explain the importance of pollinators and how landowners can simply and inexpensively introduce the plantings that pollinators find irresistible. Not surprisingly, PPNE founder Donna Merrill will be the first speaker. Merrill will deliver her talk, titled “Pollinator Pathway: Bee On It,” tomorrow, Tuesday, March 1, at 7 p.m. Register here.

Five years ago, Merrill built a “highway” of native plants for pollinators that connected neighbors and communities across Eastern New York and Western Connecticut. Witnessing the excitement unleashed by this project, she knew she could not stop and as a result launched the Pollinator Pathway. Participants in Tuesday’s talk will learn how property owners and towns can work together making simple changes “one backyard at a time” to reverse the many environmental threats to our wildlife, our water and ourselves. Learn what a pollinator pathway is, why do it, and how to set in motion an energy that will inspire neighbors and communities to build a healthier world for bees, butterflies and all of us.

The New Haven Conservation Commission is co-sponsoring this first webinar.

Emily May, from the Xerces Society, will be second on the Zoom list. She’ll address local pathway boosters on Thursday, March 10, regarding how to plant diverse, native plants without using pesticides. Organizers are lining up four more speakers to cover such topics as bee biology, rewilding, and the Ecotype Project.

May described the importance of the pollinator pathway during an email exchange with the Independent.

“Planting diverse, locally adapted native plants creates stepping stones of food and shelter for pollinators between larger patches of habitat,” she said. “The more of these patches we can establish for pollinators, the more resilient they’ll be to the many threats they face, including habitat loss, pesticides and climate change.”

She believes Addison County has “incredible potential for supporting pollinators across public and private lands, including yards and gardens, municipal lands, roadsides, farms, and natural areas.”

Gilman realized as a child that his love of gardening was dependent on pollinators making the rounds to his homegrown produce.

“It cultivated in me a deep connection with land and the spirit of place and working organically,” he said. “(Nurturing pollinators) was something I had to do for my livelihood and lifestyle as a farmer.”

Sowing native plants has become Gilman’s passion, with guidance from PPNE and the Ecotype Project.

He’s pleased to see the nascent pollinator pathway effort in Addison County, and believes Middlebury College — the county’s largest property owner — should join the effort. To that end, he established a student initiative called “Rewild Midd” to encourage the Middlebury College administration to reserve some of the college’s real estate for growing native plants. Students have begun asking why the Middlebury campus does not match the college’s ecological values, Gilman said.

“We’re frustrated about seeing all the leaves get carted off and acres and acres of lawn. This energy started growing for rolling back the lawn and rewilding the landscape with native plants,” he said.

College officials have yet to agree to a rewilding plan, according to Gilman. 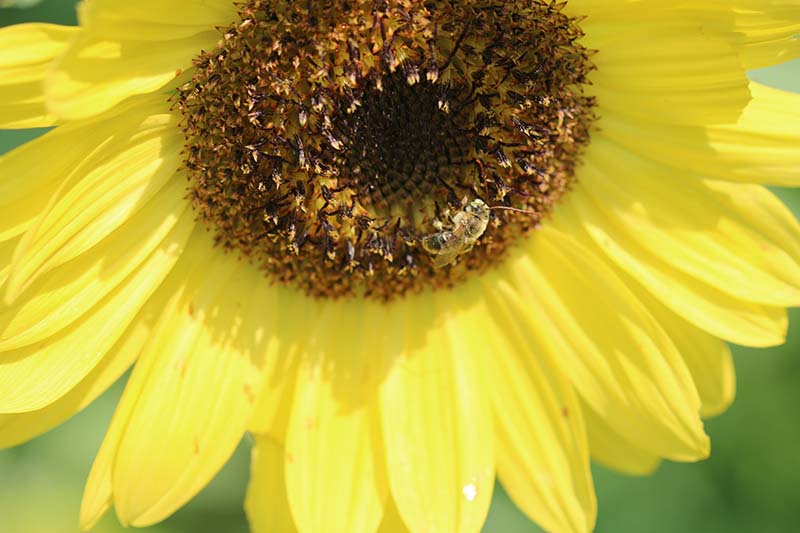 A Longhorn bee is busying working on a sunflower; the work happens to spread pollen from plant to plant.
Photo by Emily May, Xerces Society

Meanwhile, Putnam is suggesting folks refrain from raking or leaf blowing areas they aren’t inclined to mow. She explained insects like to over-winter and mature in clumps of fallen leaves, so clearing that kind of natural debris removes potential habitat for pollinators.

“More trees, more leaves, more places for those insects to over-winter so the next spring, they can come up, they’ll have food and start pollinating.

“It’s not just the plants; it’s the whole habitat around the plants,” Putnam said.

She stressed flowers and shrubs are only part of a pollinator-friendly landscape. Oak, wild cherry and willow are among native tree varieties that should also be part of the picture, Putnam noted.

“They are magnets for these beneficial insects,” she said. “We need to plant more and we need to be careful with the ones we’ve got.”

Pollinator pathway boosters stressed landowners needn’t spend scads of money to augment plantings. For example, you can find acorns in a nearby forest and plant them. There are some fine pollinators growing at the side of many roads, so transplant a few of those. Don’t mow a section of your property, and you might find pollinator plants emerge without much effort on your part. Members of the county pathway group will conduct seed swaps to help diversify your garden.

Visit pollinator-pathway.org for tips on what to grow.