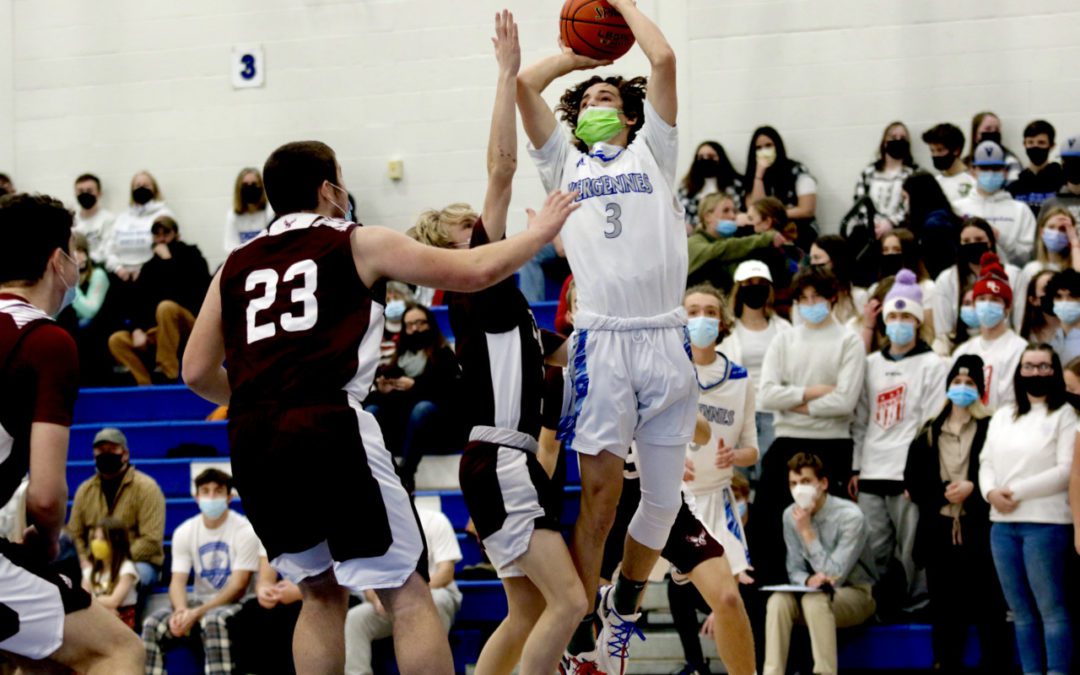 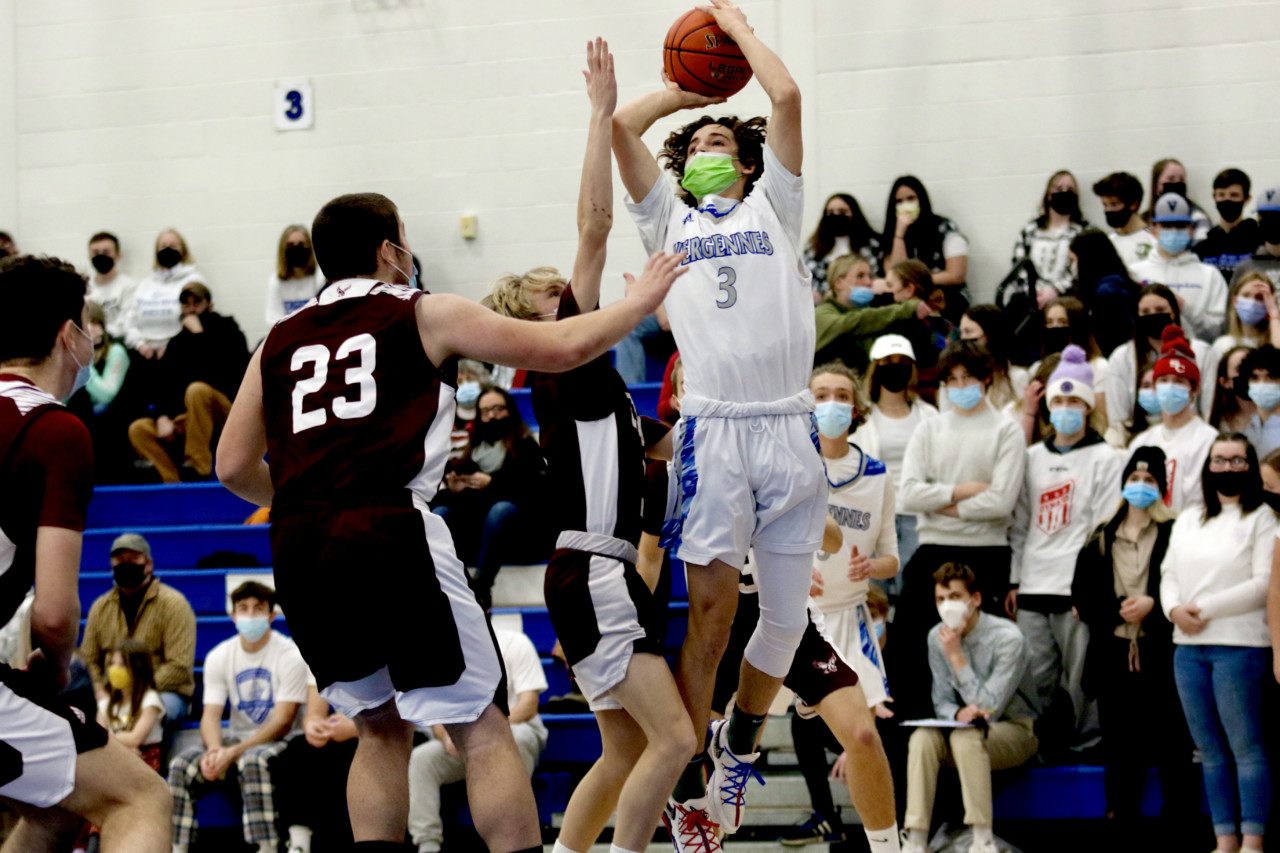 "The Mount Abe guys played really hard. They really challenged us, and made us work for everything we got.”
— Commodore Coach Josh Carter

VERGENNES — In a game not decided until the final minute, the host Vergennes Union High School boys’ basketball team held off Mount Abraham on Saturday, 52-45.

The Commodores led by as many as 11 early in the third quarter and by six with the ball two minutes into the fourth, but the Eagles’ hard work on defense and the boards allowed them to twice tie the game down the stretch and at one point take a two-point lead.

The Eagles wiped out the Commodores’ 37-31 lead in the fourth when Henry Cogswell stole the ball after a VUHS defensive rebound, converted a basket while being fouled, and hit the free throw at 5:54. Just over a minute later Chance Denecker hit a three-pointer following an Eagle offensive rebound. 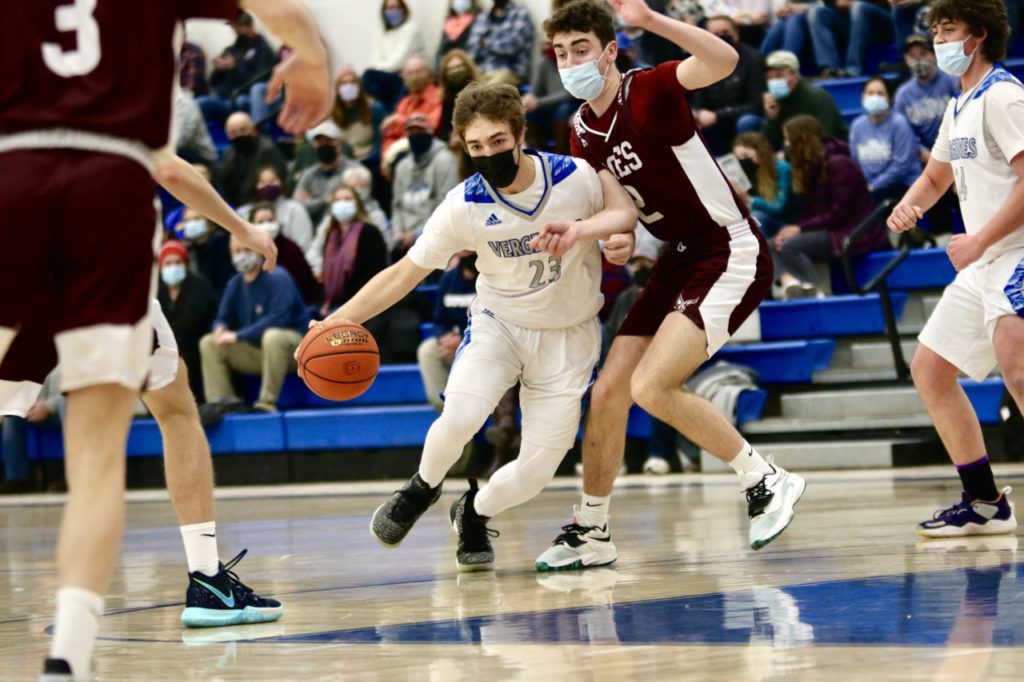 VUHS SENIOR GUARD Tim Ashley attacks the lane from the top of the key as Eagle senior Henry Cogswell defends during Saturday’s boys’ hoop game at VUHS. Ashley and Cogswell were their teams’ high scorers as the host Commodores topped the Eagles.
Independent photo/Steve James

Their momentum continued. After an Abram Francis hoop for VUHS, the Eagles answered to go on top, 41-39, for the first time since early in the second quarter. Ian Funke hit a layup on a nice pass from Gavin Bannister, and a Denecker transition hoop made it 41-39 midway through the fourth quarter.

VUHS sophomore Tyler Bergmans responded with back-to-back drives to put VUHS back on top. Then the final tie came when Cogswell stole the ball as the Eagles pressed, and he fed Denecker on the break for a bucket with 2:50 remaining.

After Bergmans sank two free throws at 2:11 to put the Commodores back on top, the Eagles had chances to tie or retake the lead. After two offensive rebounds, Mount Abe missed the front end of a one-on-one free throw chance.

Then came the biggest play of the game. Francis rebounded the missed free throw for VUHS and went to the line. He missed, but Commodore center Ian Henderson grabbed the rebound, and the ball went to Commodore Tim Ashley at the top of the key.

Ashley had already hit four three-pointers in the afternoon game. VUHS Coach Josh Carter later said Ashley’s fifth was maybe not the play he would have drawn up, but that he wouldn’t argue with the result. Ashley nailed the shot, and the Commodore lead was 48-43 with 31 seconds left in the game. 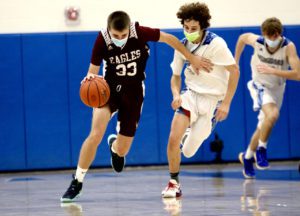 Mount Abe’s Bannister sank a putback with 4.4 seconds left to make it 48-45 and give the Eagles hope for a miracle finish, but it was not to be. Ashley hit two free throws with 2.5 seconds left, and Bergmans stole the inbounds pass and laid it in to create the final score.

Carter credited the Eagles for the press that caused seven fourth-quarter turnovers and for their effort on the boards: They outrebounded the Commodores, 44-31, including team rebounds, with Noah Gargano, Gavin Bannister and Norman Benoit all working well underneath.

“They came up with a good game plan, and they executed,” Carter said. “And the Mount Abe guys played really hard. They really challenged us, and made us work for everything we got.”

Mount Abe Coach Martin Clark was happy with the Eagles’ rebounding and man-to-man defense, but hopes some shots will start to fall.

“We’ve been working hard on practice on body positioning and trying to get after rebounding,” Clark said. “But we need to finish. We missed a lot of easy shots inside. Definitely shooting was the difference in the game. We had a lot more opportunities than they did, but we didn’t shoot the ball well.” 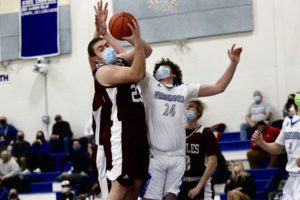 For example the first period ended with VUHS up by just 8-5. The Eagles momentarily caught fire early in the second period, when Cogswell score a bucket in the lane and then drilled back-to-back threes as Mount Abe took a 13-8 lead.

But Mount Abe didn’t score again in the quarter, and the Commodores answered with a 12-0 run sparked by two Ashley threes, two Bergmans layups, and a coast-to-coast score by guard Elijah Duprey.

“We definitely just made some shots, and they were either just momentum builders for us, or momentum killers for them,” Carter said. “And I thought that was the difference, just being able to respond to their runs.” he said.

“Timmy’s shot at the end of the game was a tough one for me to watch as a coach, but it went in, and we had the five-point lead and a little comfort,” he said.

The Eagles dropped to 2-4, with three of the losses by between one and seven points. Cogswell led the scoring with 16 points, followed by Denecker (14), Benoit (six) and Bannister (five).

Clark said he expected the Eagles to bounce back at home on Tuesday vs. Milton, and that he was proud of the Eagles’ rally in Saturday’s competitive game.

“It was just a good battle,” Clark said. “That’s always fun, but I hate to be on the losing side of it.” 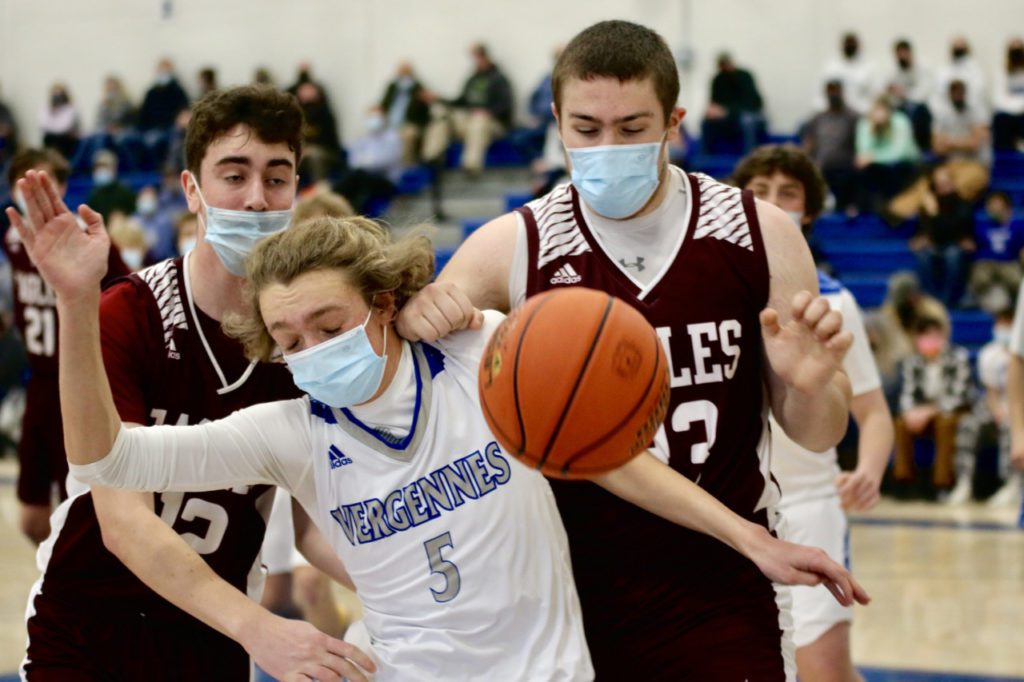 THE GOING WAS tough on the boards in Saturday’s boys’ hoop rivalry game between VUHS and visiting Mount Abe, as Abram Francis, left, would testify after running into the Eagles’ Norman Benoit, with Henry Cogswell looking on. The Commodores prevailed in a tight game.
Independent photo/Steve James

In each of two close wins last week the Commodores were without a starter, Hayden Bowen on Saturday and Bergmans in a three-point win at Missisquoi on Wednesday, but managed to do enough to win, Carter noted.

And he was happy with their effort on Saturday, but said the Commodores have to work on a few things despite their strong record.

“The boys played really well. There are just a lot of turnovers we’ve got to take care of, rebounding we’ve got to take of. All of those things just added up today and made it for a tougher game,” Carter said. “But I think our best basketball is ahead of us. I feel like we haven’t played our best game yet, and that’s encouraging.” 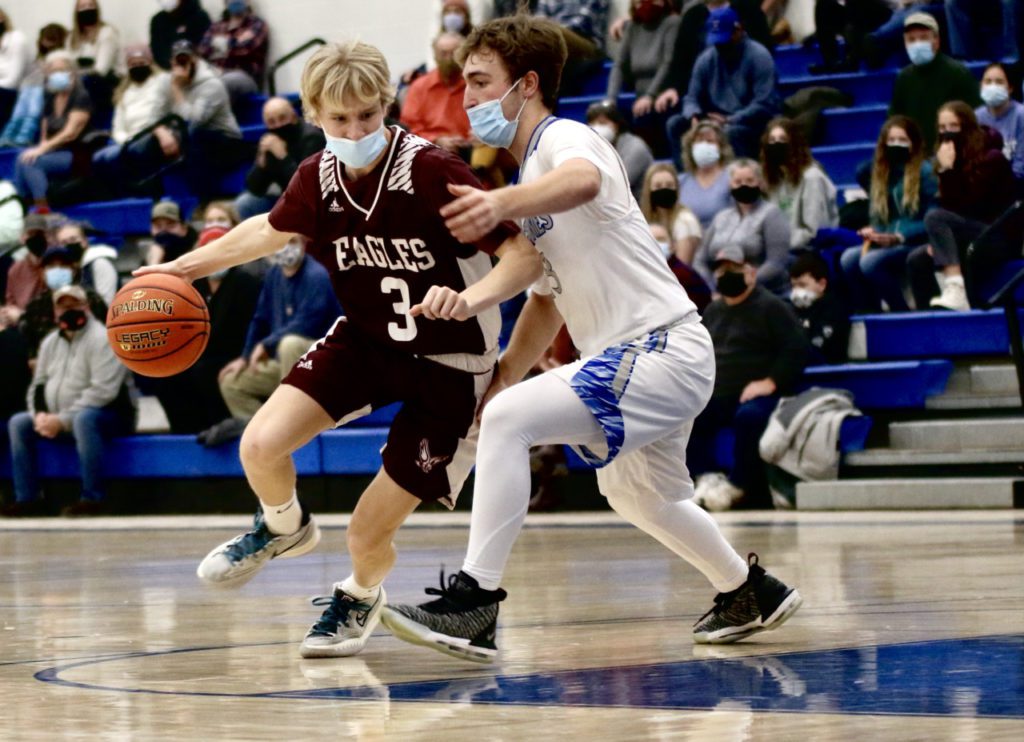 EAGLE CHANCE DENECKER tries to work the ball into the lane against Commodore Tim Ashley during Saturday’s boys’ basketball game at VUHS. Both players had strong outings in a close game won by the Commodores.
Independent photo/Steve James