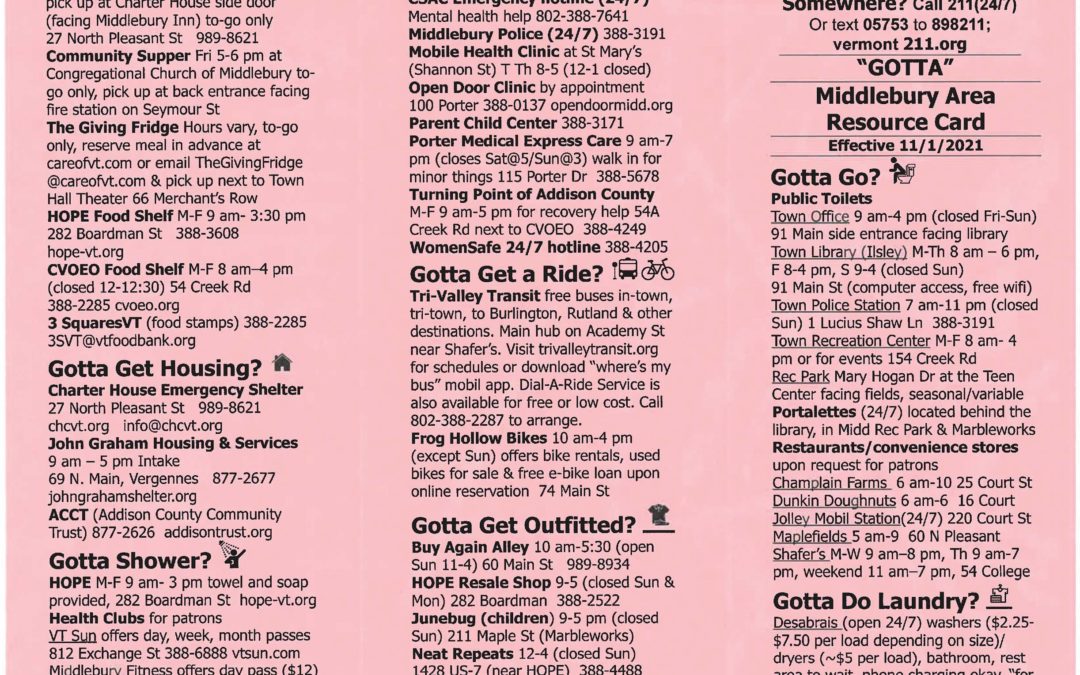 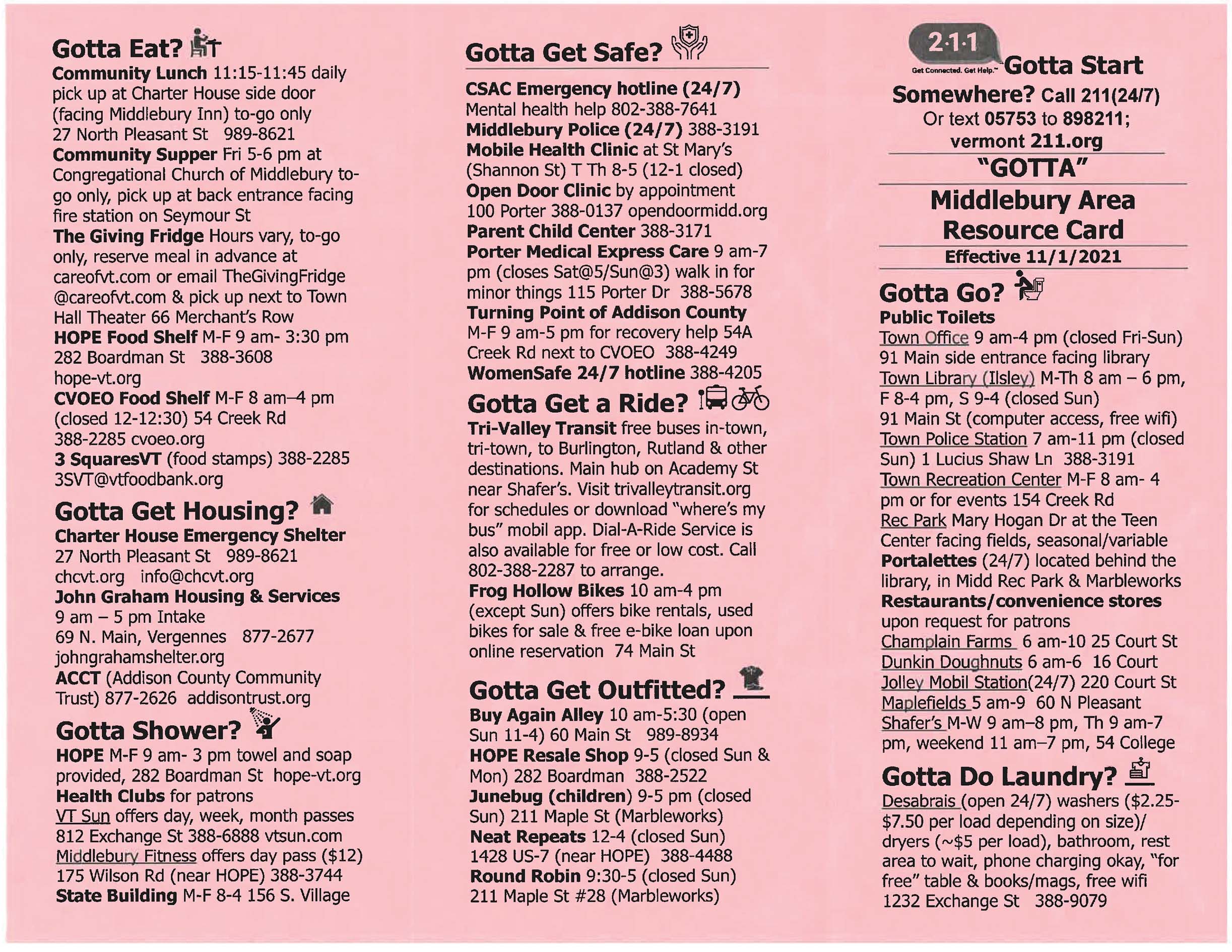 THE MIDDLEBURY AREA Homelessness Task Force has devised a “Gotta Go” card to help the homeless, visitors and locals easily identify and access vital services. The other side of the card features a map of downtown Middlebury that points out locations of individual services.
By John Flowers

MIDDLEBURY — Being homeless can be terrifying enough — not knowing where your next meal is going to come from, nor where you’re going to seek refuge from the elements during a long, cold Vermont winter night.

Organizations like the John W. Graham Emergency Shelter in Vergennes and the Charter House Coalition’s warming shelter in Middlebury provide the homeless with some solid options in the face of hunger and freezing temperatures.

But where can those, who have the least, go to find employment opportunities, a free meal, health care, or simply a restroom when it’s late at night and everything is closed?

Those are some great questions, and members of the Middlebury Area Homelessness Task Force decided to answer them — along with many others — and place the responses on small laminated flyers that will be distributed to homeless individuals and families this fall and winter. They’re called “Gotta Go” cards, linking holders to a panoply of services running the gamut from local food shelves to public transportation.

Laura Asermily, a former Middlebury selectperson and member of the Homelessness Task Force, said the impetus for the Gotta Go cards came from homeless persons and the human service agencies that assist them. It began as an effort to let people know simply where to find a restroom when they’re out and about in Middlebury (see related story on this page).

And task force members thought, “Why stop at restrooms?”

“There was also the need to do a simple resource card that went beyond that, that addresses some of the other basic needs — like community meals and access to Charter House — and to do it in a simple, user-friendly format,” Asermily said.

She drew inspiration from a warming shelter resource card she found at the Ilsley Library earlier this year.

“I showed it to (warming shelter Director) Heidi (Lacey), and she said the information was dated,” Asermily recalled. “Then I said, ‘Let’s work on a new one.’”

She checked in with local nonprofits — like Helping Overcome Poverty’s Effects and the Turning Point Center of Addison County — to see if they had generated resource cards or brochures of their own. Sure enough, they had, as had several other organizations, including Porter Hospital.

Asermily was finding pages upon pages of material to borrow from. She and her colleagues knew they needed to condense it to make it more user-friendly for folks needing a single, versatile resource guide.

The task force took on the Gotta Go assignment this past July and spent more than three months compiling information and refining it. The completed card features a map of downtown Middlebury, as well as a page of service destinations with their addresses and phone numbers.

“A lot of the work became compiling, reviewing and updating the information and coming up with a ‘Gotta’ card that could be reviewed by everyone (for accuracy),” she said. “And that’s what you see in the final product.”

Need an appointment at the Open Door Clinic, where can you wash clothes or get a shower, how do you access local food shelves and where can you to get clothing? Gotta Go has it covered. Need to use a restroom, receive emergency mental health counseling, need to borrow a cell phone to contact service providers, or need to escape an abusive relationship? Gotta Go can guide you.

An initial run of 500 Gotta Go cards was printed and distributed early this month, thanks to a $500 contribution from the United Way of Addison County. The organization will also support an imminent second printing of around 2,000 cards, according to Asermily.

Every agency featured on the Gotta Go card has received a batch of them to distribute to clients, Asermily said. The cards are also available at such commonly frequented places as the Ilsley Library, Middlebury’s police department and town offices, Addison County Sheriff’s Department, Middlebury Regional EMS, the town’s recreation facility, convenience stores, Tri-Valley Transit, area consignment stores like Neat Repeats and the state offices at South Village Green.

The Gotta Go card will be an ever evolving resource, Asermily noted. Featured organizations will occasionally alter their charitable programs and the time/dates on which they’re offered, she reasoned. So Gotta Go has gotta pivot to reflect those changes so that vulnerable people get the most accurate info possible.

“The Gotta Go card is a quick, fairly easy-to-use reference for really anyone looking for help,” she said. “It’s true that it was crafted with our homeless neighbors in mind, but in reality, it provides for all persons seeking help with a variety of needs. The card allows for immediate contact, even after hours, by including the option of the statewide 2-1-1 service. Addison County is rich with service agencies and providers; use of this card will surely get folks connected to the right resources, even if referrals are the outcome.”

She believes warming shelter guests will actively use it.

“The card is easy to carry and is being made accessible at appropriate locations,” she said. “Ease of access allows a person to seek help as needed and this is a discreet way to get the word out. We have already heard mention of it by persons seeking emergency shelter and have had two new households take advantage of our takeout community lunch program. In these cases, connections begin and services can commence.”

Task Force member Mary Chapman knows firsthand what it’s like to be homeless. A lengthy illness depleted her income and savings in 2018, to the extent she lost her apartment and needed help from John Graham Housing & Services. She was put up at a local motel for a while until she was able to get back on her feet.

Chapman is now committed to helping others who are unhoused.

“It’s been a privilege for someone who’s been house-less before to be part of (the task force), and to see so many community members come together to support us,” she said. “It’s been very humbling, and I’m grateful for the experience.”

Chapman believes Gotta Go will be useful for people in crisis.

“As someone who has dealt with a lot of government information and bureaucracy, the paperwork is overwhelming,” she said. “I think it could benefit the community having this card … Because I grew up in the area, I knew the services that were available. If you come from middle class and are homeless, you don’t know where to turn. You’re not going to know where to go.”

Like Lacey, she believes people from all walks of life, and particularly visitors, will find the card useful.

“We have a lot of tourism in Middlebury,” she noted. “It would be nice to know some of these things.”