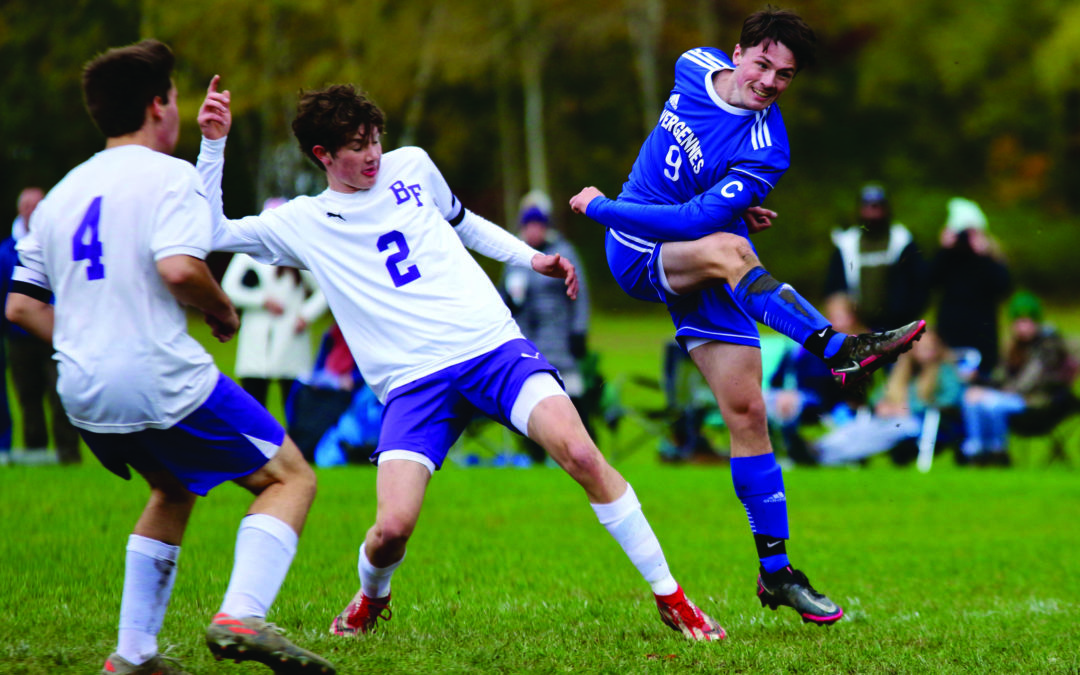 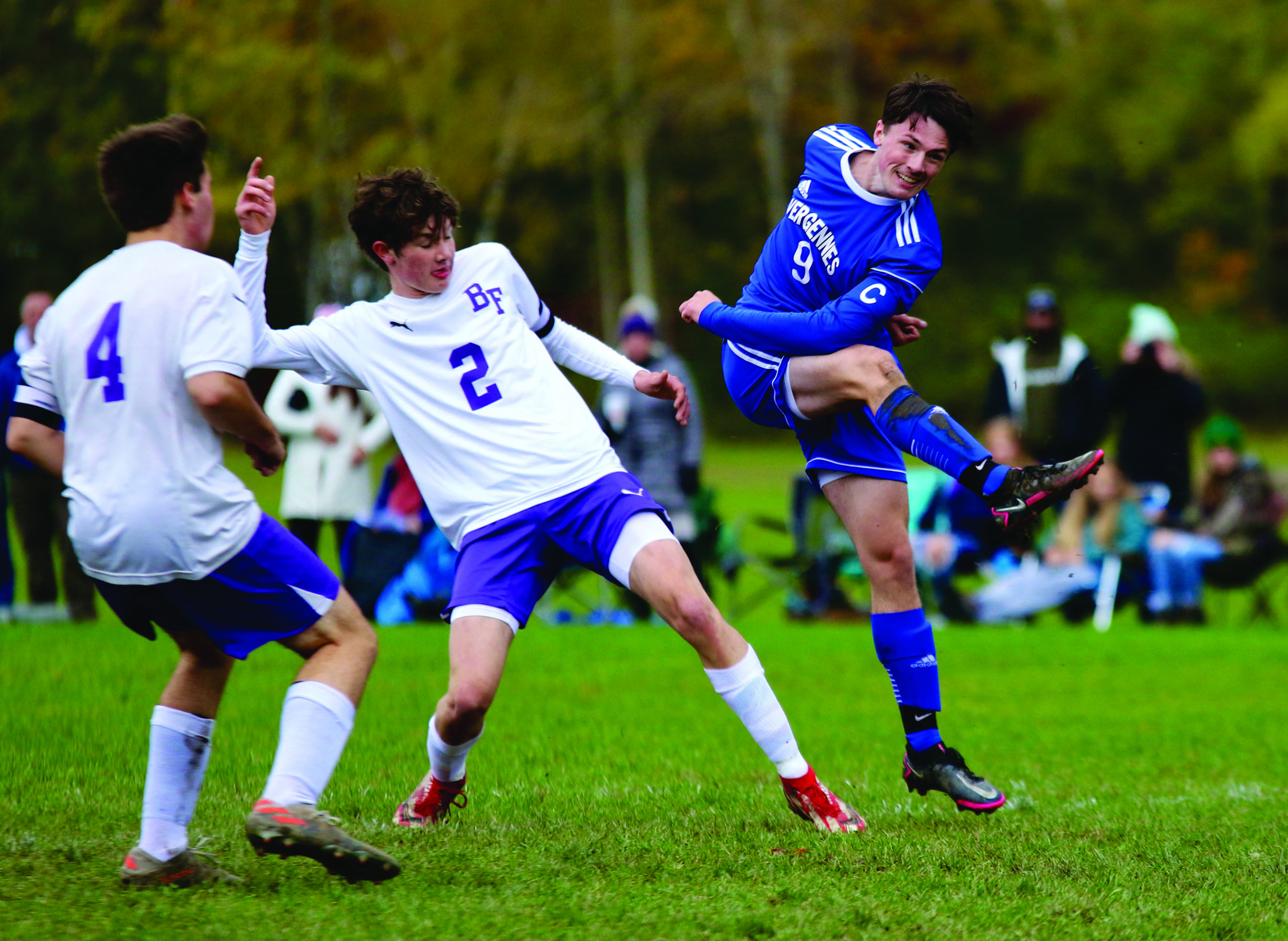 VERSATILE VUHS SENIOR Jonah Mahé shows both winning form and a winning smile as he follows through on a shot that found the net during the Commodore boys’ first-round playoff win. Mahé excelled at both ends of the pitch as VUHS won 10 times and reached the D-II semis. Independent photo/Steve James
By Andy Kirkaldy

BRISTOL — An old adage states, “The race doesn’t always belong to the swift, nor the battle to the strong.”

But sometimes the favorite really just is faster and better and is favored for a reason. Or several reasons.

Consider Tuesday’s first-round high school boys’ soccer playoff game between No. 4 Vergennes, which came into the Division III playoffs with a 9-3-2 record against a tough schedule, and No. 13 Bellows Falls, 1-12 against softer competition.

It looked like a mismatch on paper. It was.

When the dust settled — OK, there was no dust. Mount Abraham agreed to host the game because by Tuesday after days of rain the Commodores’ home field looked more suitable for kayaking than soccer.

Anyway, the Commodores scored early and often as they leashed the Terriers, 13-0. 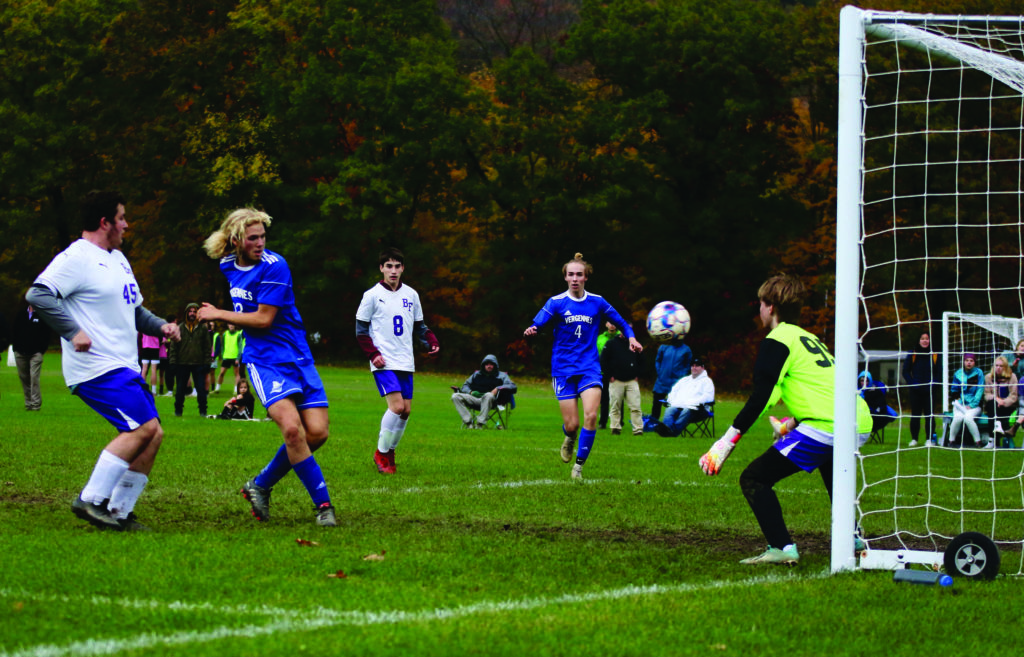 COMMODORE MIDFIELDER JADE Edwards one-times home a first-half goal during his team’s easy first-round playoff win on Tuesday in a game played at Mount Abe. No. 4 VUHS is scheduled to host No. 5 Peoples, the defending D-III champion, on Friday.
Independent photo/Steve James

But the Commodores know their real postseason begins on Friday, when they’ll host defending champion Peoples Academy (10-4-1), the No. 5 seed. Peoples ousted No. 12 Oxbow on Tuesday, 10-0.

A year ago in a semifinal game, Peoples, the No. 4 seed in 2020, defeated the top-seeded Commodores, 1-0. The Wolves’ last-second goal was a fluke deflection, but they carried much of the play.

The Commodores realize they have to play better this year, and believe they’re capable of doing so. Mahé, the senior captain, said playing with poise and intensity will be important.

“We’ve got to really focus in and get back into our rhythm. We’ve played tough teams, and we’ve done well during the season, and I don’t want to let this (game) give us false confidence,” Mahé said after Tuesday’s match. “For Peoples, being aggressive out of the gate and getting our focus back on point is what it will be for us.”

That tough schedule should help the Commodores, too, Mahé said: Games against top D-II teams like Middlebury and Milton have prepared them to take on the better D-III sides.

“Actually developing your team throughout the season, maybe losing a few games, seeing what that feels like, understanding those moments that are pivotal to development, I think that’s what it’s all about,” he said. “We have to analyze what we were doing wrong so we can go play these tougher teams in Division III.” 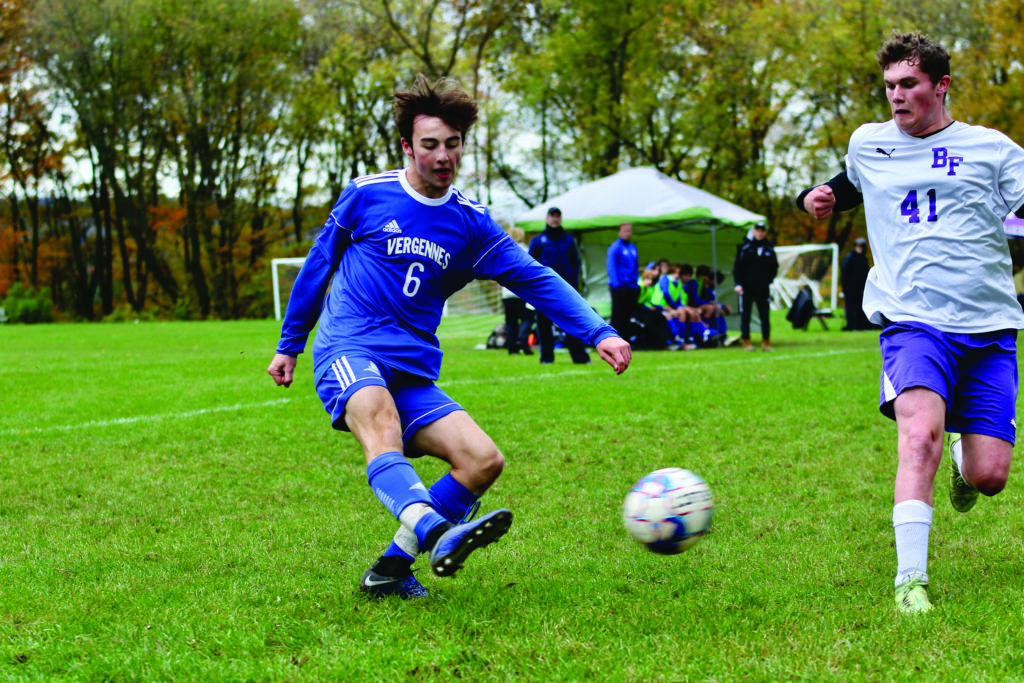 VUHS SENIOR FORWARD Ethan Gebo serves a ball from the right side during the No. 4 Commodores’ 13-0 romp over No. 13 Bellows Falls on Tuesday. Gebo set the tone early with a goal in the second minute and later picked up an assist.
Independent photo/Steve James

Coach Kevin Hayes believes his team is better equipped this year to handle Peoples and other challenges beyond — Nos. 1, 2 and 3 seeds Green Mountain, Winooski and Enosburg all entered the tournament with one loss.

Hayes cited improvement up and down the field, but particularly at midfield, the team’s biggest problem vs. Peoples a year ago.

“We’re bigger, faster, stronger. We’ve got the right personnel in there,” Hayes said. “Midfield is stronger than last year. I feel Shamus (Rooney) is more of a presence up top. Defensively, we’ve been solid this year.”

Regardless of whether the tournament really begins in the quarterfinal round, the schedule required Tuesday’s match.

Ethan Gebo put VUHS on the board in the second minute, when center middie Jack Wyman found him cutting open (that happened a lot for VUHS) into the right side of the box, and Gebo ripped a shot high into the right side past BF goalie Christopher Leary (11 saves).

Mahé made it 2-0 in the eighth minute, taking a right-to-left feed from Kayhart across the top of the box and pounding it inside the left post. Wyman made it 3-0 at exactly 24:00 with a 22-yard wonder strike that grazed the framework on the way into the upper right corner.

Before the half, Jade Edwards slammed a Gebo feed from the right end line into an open goal; Kayhart, at about the penalty stripe, tucked a back pass from Rooney inside the left post; and DeBlois knocked in a loose ball from a scrum.

After the break, defender Hayden Bowen scored on a long direct kick that bounced home when Leary apparently believed it was an indirect kick that didn’t require his attention.

Thirteen minutes in, VUHS goalie Abram Francis picked up a long Mackinnon Ross shot that rolled in on his net for his only save.

Given ample room to make plays, VUHS kept scoring: Rooney hit the right corner with a 15-yard left-footed shot after a nice controlling touch; Kayhart banged in a loose ball from near the penalty stripe; Oakley Francis, at the top of the box, took a feed from Elijah Duprey and ripped it in; Duprey headed home a Francis feed from the right; and DeBlois netted his own rebound.

“We saw some good stuff,” Hayes said. “It’s tough in a game when you’re not as challenged as you want to be, but it’s good for the offensive guys to get in some work.”