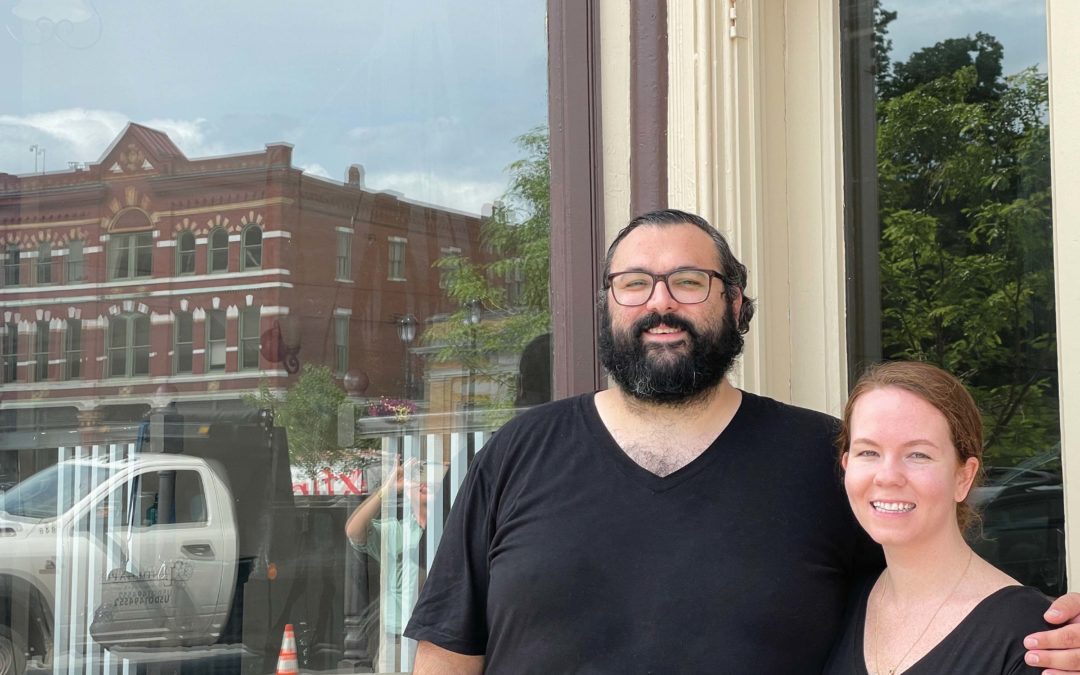 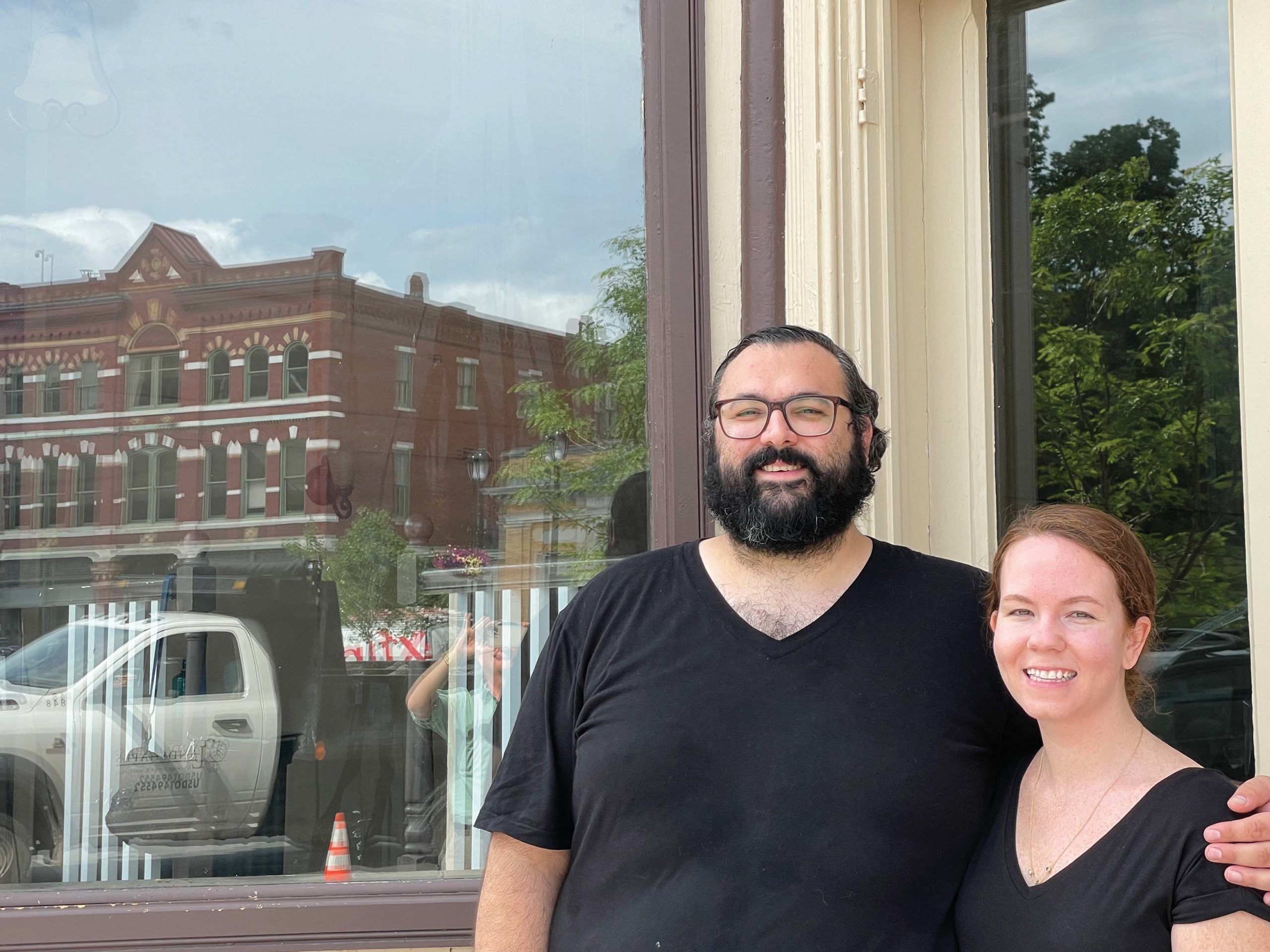 All three enterprises were among the approximately 40 businesses that sought start-up grants through the Middlebury Kick Start program. While neither Berkshire, Juice Amour nor Little Seed were among the six grant awardees, all three persevered and secured downtown storefronts in the Battell Block.

“The influx of new businesses to Battell Block this summer signals a rebirth of the downtown vibrancy I’ve loved since my days as a student at Middlebury College in the 1990’s,” Ciffo said. “Back then, Battell Block’s storefronts included Skihaus for outdoor gear … and Amigos Cantina for margaritas and tacos … it was a hustling, bustling location, critical to the community, and that’s the energy that we intend to see again at the Block.”

The Battell Block’s 30 apartments are all under lease, and its commercial spaces are filling up following a couple of challenging years marked by COVID-19 and the downtown Middlebury rail tunnel project. And Ciffo added BBP has a “promising offer on the table” for 51 Main. St.

“It’s no secret that we’ve had several vacant storefronts for the past couple of years now, but we’re seeing the shift right now, we’re partnering with talented tenants who intend to responsibly invest in the community for the long haul, and we’re bringing in businesses for which there is a downtown need,” Ciffo said.

It’s been a rollercoaster ride, with COVID-19 largely responsible for the few low points. The pandemic forced her to close her St. Albans store because it was in a gym that was temporarily shuttered due to the virus. Her Burlington store (at 198 St. Paul St.) took a major hit due to both COVID and a road project that impeded customer traffic for around a year.

But the Middlebury store has kept chugging along, thanks to a dedicated staff and a clientele devoted to the notion that a tasty, healthy diet is critical — especially during a worldwide pandemic. Customers have continued to pick up their juice, smoothie and/or other Juice Amour favorites while adhering to COVID protocols.

“We needed to create a habit for people that was easy for them to maintain,” she said.

The Route 7 space has been within her budget, and has allowed Juice Amour staff — led by Manager Brooke Lossman — to work out the kinks and get a handle on what kind of kitchen setup is needed to succeed for the long haul. Juice Amour’s needs largely involve sinks and solid plumbing, as the business deals with raw, organic products that aren’t put through a variety of cooking devices.

Knowing location is a key to retail success, recent years have seen Bedard look more seriously at getting into — or at least on the periphery of — the downtown.

But finding the right spot has been a challenge. Pricey rents and/or a lack of convenient parking were among the biggest hurdles. Bedard acknowledged that while downtown storefronts started opening up a few years ago, she and other prospective tenants were wary of the impacts of a then-looming Middlebury tunnel project that would bring noise, detours and other construction disruption to the core village area.

Then there was the prospect of incurring debt in order to complete a move.

She kicked the tires on a number of spots, including on Washington Street. But her prime targets either didn’t measure up or were too expensive, Bedard noted.

“Every instinct in me was that we needed to be downtown, but there had to be parking,” she said, noting most of her customers like to grab their purchase and go, rather than take a seat and linger.

Bedard’s search finally ended this summer, after she toured the former Kiss The Cook space at 16 Merchants Row. At 1,600 square feet, it was 400 square feet larger than her Route 7 location. It will allow seating for around 30 people, and allows Juice Amour, for the first time, to do baking. Vegan scones, croissants and cookies are on the agenda.

Merchants Row is one-way and is served by more than a dozen parking spaces. The tunnel project will conclude next month, and Merchants Row tenants will have a wider sidewalk that can accommodate outdoor seating. Right across the street is an expanded Triangle Park, as well as a new Lazarus Park off Printer’s Alley, both of which will make the downtown even more attractive to potential customers.

“We’re really excited to be there,” said Bedard, who’s shooting for an Oct. 1 opening date at the new spot.

Just a few months ago, Anthony and Maggie Gerakos were both working white-collar jobs in Brooklyn, N.Y. — Anthony as an architect and Maggie as a development professional in independent New York City schools.

But last week saw the couple sizing up storefront improvements for their first-ever business venture: Little Seed Coffee Roasters. Their business will continue a recent history of coffee shops at 24 Merchants Row and born from a mutual love of coffee, a deep affection for the Green Mountain State, and a thirst for new adventures.

Anthony and Maggie’s eight years together have included a joyful search for the “perfect” cup of coffee, an odyssey that’s involved countless tastings, a lot of research and travel. They branched out into coffee roasting two years ago, using a small sample roaster in their home. Maggie and Anthony have also benefitted from the discerning palates and equipment of coffee-keen friends.

The pair began regular visits to Vermont once they started dating. They were married in Waitsfield, and resolved to move to Vermont within five years. They began planning on how to do that financially and logistically.

The COVID-19 pandemic sped up their timetable.

“Living in New York City during the pandemic gave us a lot of thinking time and planning time,” Maggie said.

They visited Middlebury this past March to check out potential homes for Little Seed. The were taken with the former Carol’s Hungry Mind Café spot.

“The space and the history behind it appealed to us,” Maggie said.

“The shell is here, which helped push us toward this location,” Anthony added.

A new, large coffee roaster will arrive next month. Anthony is using his architecture skills to ensure the roaster, seating, coffee bar and decor interact harmoniously within the 24 Merchants Row space.

Street-level seating, for up to 24 customers, will include circular lounge stations. The couple will put additional, communal seating (with long tables) in the lower level of their space, which will also accommodate storage.

“It will be a great space for students and professionals who want to go down there and have some quiet to get work done,” Anthony said. “Up here, it will be a little louder with the machines running.”

“We want to make good specialty coffee approachable,” Anthony said of the overall business goal. “It can be hard to tap into if you’re not familiar with what you’re looking for.”

Maggie and Anthony will work with buyers such as Red Fox Coffee Merchants that acquire beans from top producers within the so-called “Coffee Belt” near the equator. These buyers, according to the couple, are committed to fair compensation for coffee bean farmers.

And for the couple, it doesn’t stop there.

The duo will buy coffee seasonally. Their stock will include four rotating, single-origin varieties — each one focusing on a different continent — and one espresso blend. They’ll of course have coffees available each day on drip.

Little Seed will contract with local bakers for pastries, shortbreads, cookies and other goodies that will complement the coffee drinking experience.

Roasting will be a major part of the couple’s Little Seed business plan, as they don’t want to rely exclusively on sales of individual cups of coffee and pastries. They’ll sell bags of Little Seed Coffee Rosters both in-house and wholesale through their website, littleseed.coffee. Each bag of coffee will include the name of the farmer, farm and location of where the beans were produced.

Little Seed’s walls are currently a blank canvass, by the couple wants to fill it with a rotating collection of works on loan from Addison County’s talented collection of artists. They have no plans to charge a commission fee for artwork sold from their walls.

“Part of our ethos is definitely making it community space, and that obviously involves the arts,” Anthony said. “If (the artwork) gives some people an extra reason to come and have coffee … and if we can help local artists at the same time, that’s great.”

Owned by Lynn & Jack Russell, Berkshire Hathaway’s Middlebury branch is one of 10 statewide.

In addition to its real estate services, Berkshire Hathaway places an emphasis on giving back to the communities in which it does business, according to its website, vtregroup.com.

“It is not uncommon to see our agents and staff at fund raising events, on community committees and sitting on boards of local charities,” according to the website. “Our team contributes to local food banks, works on volunteer fire and rescue teams, and supports many children’s programs. We are a major contributor to the local Easter Seals chapter and the Vermont National Guard Charitable Foundation.”