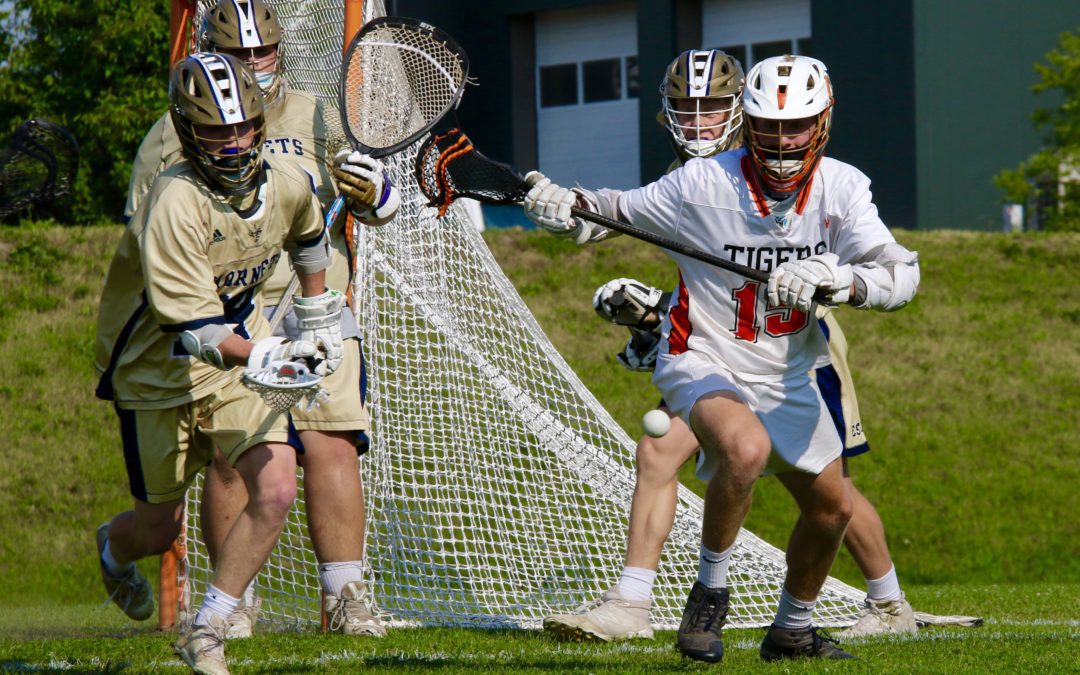 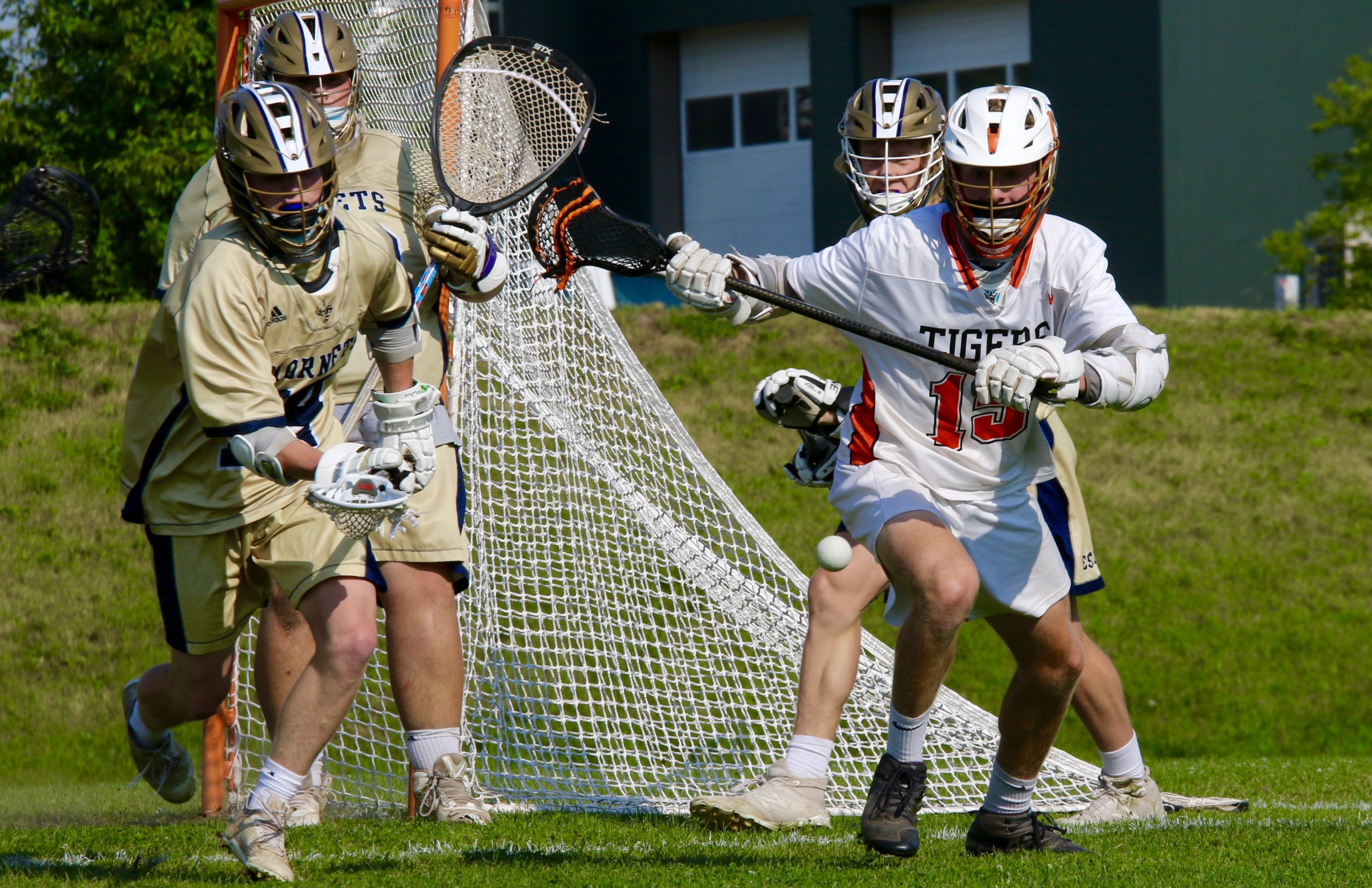 The Commodore girls’ lacrosse team, seeded second in Division II, advanced easily in its Friday home quarterfinal, 13-2 over visiting Woodstock. The Commodores improved to 13-2 and will host Green Mt. Valley (9-2) in a Wednesday semifinal at 4:30 p.m. The Gumbies defeated the Commodores in Waitsfield late in the season, 9-5.

Against the 5-8 Wasps on Friday VUHS-Mount Abe allowed only three shots on goal, one of which freshman goalie Carley Cook, filling in for injured senior Ashley Tierney, stopped. The Commodores led at the half, 4-1, and then pulled away in the second half despite a dozen total saves from Wasp goalie Audrey Emery.

The Mount Abe-VUHS boys also won a quarterfinal, defeating visiting OV for the third time this spring, this time by 11-6 in a Wednesday D-III matchup. It was the Eagles’ fourth straight win and their first playoff victory in five years.

Iain Olsen and Henry Anderson led the 6-8 Eagles with three goals apiece, and defender Carmelo Miceli scored a pair. Billy Lyons, Giles Heilman and Andrew Nolan chipped in a goal apiece, and goalie Aidan Danyow made eight saves. The Eagles will take on No. 1 Green Mt. Valley (5-2) on Monday afternoon in hopes of securing a berth in a Wednesday final.

In D-I boys’ action visiting Essex (10-4) ended the Tigers’ season by edging them in a Friday quarterfinal, 8-6. The young Tiger team ended with a 10-5 record, with three of their losses coming to Essex, one in overtime, and the other two to top seed Champlain Valley, one in overtime.

Their wins included one at No. 2 Woodstock and two over No. 6 seed South Burlington, and several came after the midseason loss to injury of leading scorer Bode Rubright, one of three seniors on the team along with goalie Jack Rizzo and middie Mason Kaufmann.

On this past Friday Essex got three goals from Chris Davis, two apiece from Ben Serrantonio and Carter Frankenhoff, and eight saves from Ben Russell.

The Tigers countered with three goals from Toby Draper, a goal and two assists from Owen Lawton, a goal from Zach Jette, and 10 saves from Rizzo.

In D-I girls’ lacrosse No. 8 MUHS won its home play-in match on Wednesday vs. No. 9 Rice, 6-2, as goalie Lydia Deppman came up big with 13 saves and Alanna Trudeau scored three times. Sophie Larocque, Kenene Otis and Ella Tucker added a goal apiece as the Tigers improved to 4-9 heading into Saturday’s match with undefeated No. 1 Burr & Burton.

In the Tigers’ first-round game they edged visiting No. 12 Spaulding on Wednesday, 2-1, as Olivia Audet tossed a complete-game two-hitter, striking out 15 and walking none. Audet also doubled, singled and drove in the first MUHS run. Taylor Betourney also doubled and contributed the game’s key hit, a tie-breaking single in the fifth inning that plated the winning run.

On Saturday the Tigers thumped No. 4 Springfield, 15-2, setting up a Tuesday semifinal date at No. 1 Lyndon and a possible final vs. No. 2 Mount Abe. Audet earned the pitching win, striking out 13 and surrendering five hits. She also doubled, singled, drove in two runs and scored three times.

In the Otters’ first-round win on Wednesday they scored seven runs in the seventh inning to oust host No. 8 Lamoille, 13-6. Josie Cone belted a three-run homer to highlight the OV rally, and Riley Keith, Bryn Blanchard and Grace O’Connell also chipped in offensively for OV.

Keith pitched the first five innings for OV, striking out 12, and MacKenzie McKay tossed two shutout innings to wrap up the win.

On Saturday Lyndon improved to 13-1 with a 13-1 victory over the Otters. Winning pitcher Kelleigh Simpson tossed a five-inning one-hitter, fanning nine and walking one. Ryleigh Laporte had the lone single for OV, and Keith took the pitching loss as OV wrapped up at 6-12.

In baseball action the Commodores exploded in extra innings to advance in D-III with a road win, while in D-II both Mount Abe and OV lost away quarterfinals to higher seeds.

The No. 7 Eagles gave No. 2 seed Spaulding (15-2) a battle in their quarterfinal, but fell, 6-4. Ryan Whitcomb went 4.1 innings and took the pitching loss, while Zeke Savage (three hits, two RBIs) and Neil Guy (a hit and two RBIs) combined to drive in all the Eagles’ runs as they finished a successful season at 10-8.

Top-seeded host Hartford moved to 16-0 with a 6-0 victory over the No. 8 Otters, whose 8-9 record included a first-round playoff win. Fraser Pierpont pitched creditably for OV, Ethan Blow singled twice, and Jordan Beayon doubled.