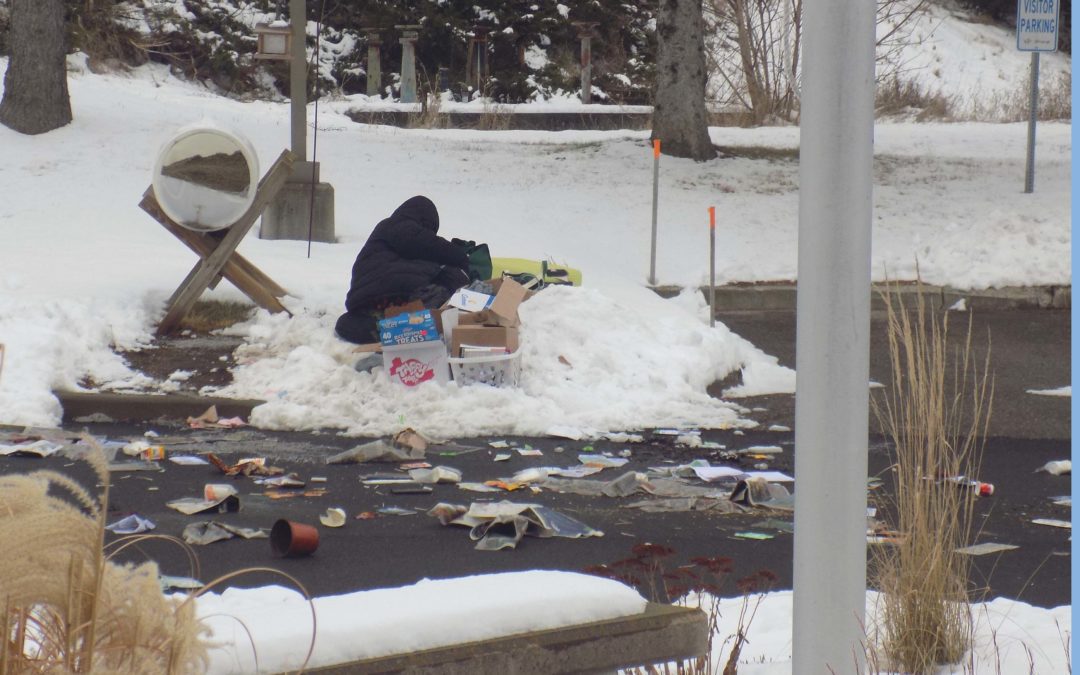 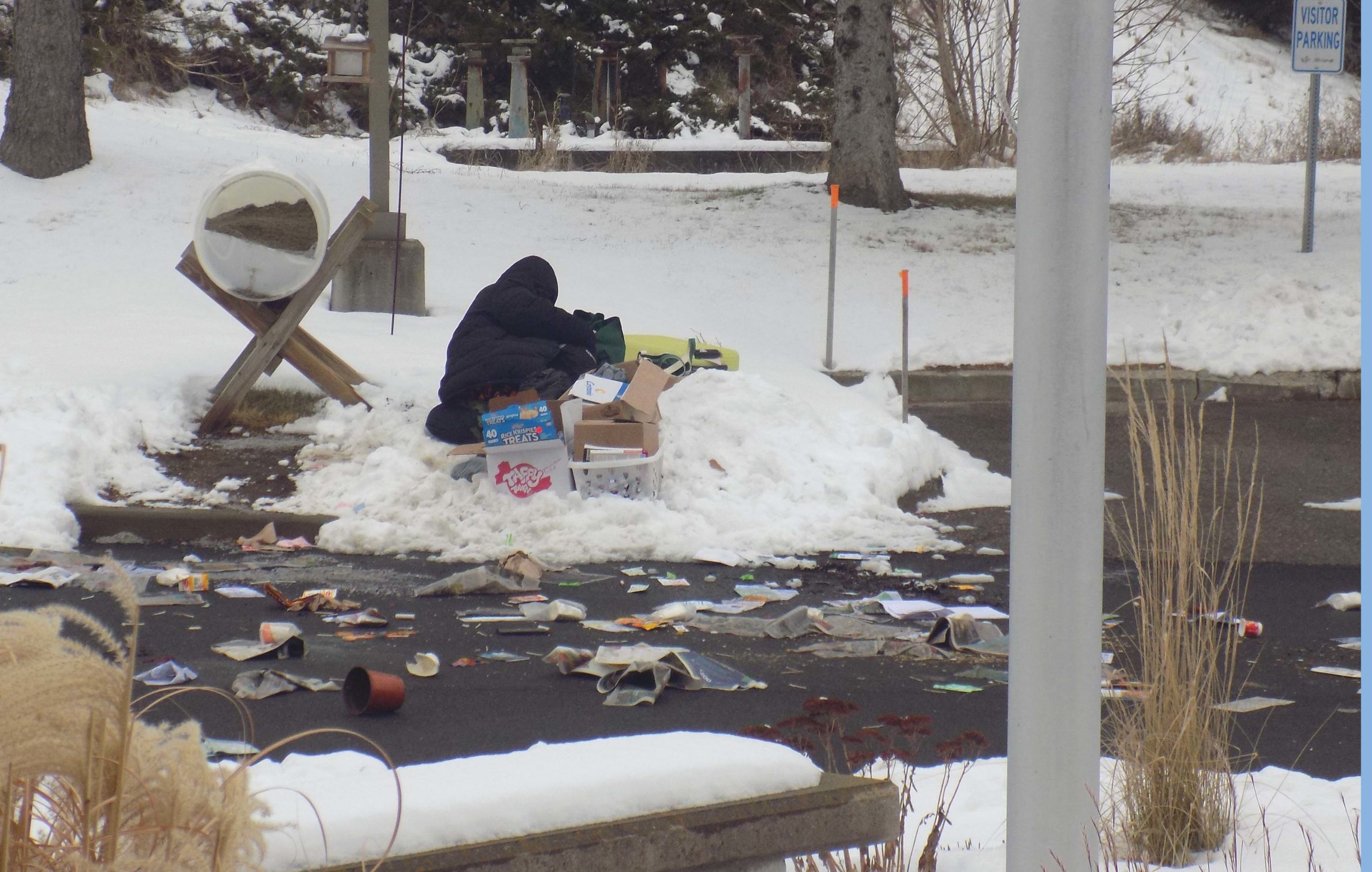 A HOMELESS WOMAN camped out next to the Middlebury Police Department from Jan. 12-13 in an episode that local officials say epitomizes a local gap in services for homeless, mentally ill individuals.
By John Flowers

There’s a lack of supportive or emergency housing for chronically homeless folks. This situation creates more transience, because people have to travel wherever there’s a bed; it takes them away from their natural (support system).
— Marian Greenberg, CSAC

MIDDLEBURY — Folks walking past the Middlebury police station off Seymour Street during the night of Jan. 12-13 caught an unusual and disturbing sight. A woman camped out in a snow bank, just a few feet away from warmth, nourishment and companionship.
It’s not that police were oblivious to her presence; they repeatedly offered her food, shelter, cellphone service and/or transportation to a place of her choice. But the woman, suffering from mental illness, rebuffed all offers of aid.
Moreover, her mental health issues did not rise to the level of qualifying her for an emergency evaluation by the Counseling Service of Addison County (CSAC), and her anti-social behavior precluded her from an invite to area homeless shelters, according to local officials.
It was an example of a chronically homeless person unfortunately falling through the county’s social services net, in spite of the best efforts of the many who tried to get her out of the cold.
“This was not a person … who was a candidate for criminal justice assistance,” Middlebury Police Chief Tom Hanley said of the woman, who can’t be identified due to medical confidentiality issues. “We weren’t going to charge her with anything, and we weren’t going to use force … It just required stand-off and patience.”
It all began at around 6 a.m. on Tuesday, Jan. 12. Police were asked to help remove a “disruptive and unruly” guest from the Middlebury Sweets Motel.
Police brought the woman to their headquarters while WomenSafe and CSAC officials arranged to get her a taxi ride to a safe place to stay, according to Hanley.
She initially told police she had a place to stay in St. Albans, according to Hanley.
And that’s when the confusion started.
“The cab came to pick her up and it turned out there’s no place in St. Albans for her; there were no arrangements,” Hanley said.
He credited the cab driver for his attempts to accommodate the woman.
“He said, ‘I’ll take you anywhere in the state you want to go; if you have a place to go, I will drive your there,’” Hanley said.
But the woman, in her state of mind, refused to cooperate, according to Hanley. She sat in the cab for around four hours during a stalemate in front of police headquarters.
Finally, the woman emerged from the cab and said she wasn’t leaving, Hanley said. So police unloaded the woman’s belongings from the cab and waited while CSAC, WomenSafe and state officials searched in vain for a place to lodge the woman that evening.
The woman’s volatile behavior — which included scattering her belongings all over the parking lot, spraying shaving cream on police cruisers, and chanting random words — disqualified her from conventional  accommodations, according to Hanley.
He credited WomenSafe officials and two members of CSAC’s emergency team — Mike Linn and Doug Corey — for staying with the woman for hours, trying to calm her and get her help. But as daylight gave way to evening, human services officials left the scene. The woman remained in front of the police headquarters and refused all offers of food, water, restroom facilities and a warm spot inside the station to escape the elements, according to Hanley.
“Over the next 12 hours, she stayed outside in a snow bank,” Hanley said with frustration. “Our (officers) would go out there periodically to make sure there wasn’t any hypothermia. She had on several layers of clothes that she’d pulled out of her suitcase.”
Sadly, the woman’s mental illness made her difficult to reason with, officials said. She yelled at those offering help and threw trash around the snow bank in which she had set up camp, according to Hanley.
A breakthrough came the next afternoon (Wednesday, Jan. 13). Heidi Lacey, a part-time Middlebury police dispatcher and Charter House Coalition staffer, gave the woman a call to a South Burlington hotel that agreed to accept her.
“(Heidi) did a great job and spent some time with her, too,” Hanley said.

BROADER MISSION
While the case was resolved, it proved another example of how local police are being asked to broaden their mission to include those dealing with homelessness and mental health crises, according to Hanley.
Middlebury police were asked to intervene in 70 mental health-related cases between Oct. 14, 2020, to Jan. 14, 2021. That’s up from the 39 cases such cases the department fielded between Oct. 14, 2019, and Jan. 20, 2020.
It also underscores, among other things, the impact the COVID-19 pandemic has had on homelessness and mental health services. The county has seen scores of its hotel and motel rooms — as well as its shelters in Middlebury and Vergennes — filled with folks, many of them needing more than just a place to stay and a meal to eat.
“Overall, there’s a lack of supportive or emergency housing for chronically homeless folks,” noted Marian Greenberg, director of CSAC’s Emergency Team. “This situation creates more transience, because people have to travel wherever there’s a bed; it takes them away from their natural (support system).
“There are so few psychiatric beds available, they’ll often end up spending prolonged amounts of time in our emergency room, or else they’re back on the street with insufficient shelter,” she added.
Greenberg explained it takes time to evaluate a patient’s mental health needs, and the solution often demands a variety of services spanning multiple agencies. This is particularly true to people who are chronically homeless and dealing with a variety of other ailments, which might include substance abuse disorders and medical issues.
“Those are the folks the Emergency Team most likely will become involved with,” Greenberg said. “Their needs are so complex.”
There are times when CSAC can help homeless clients without major intervention. Its Adult Stabilization Program does outreach at the Charter House Coalition’s warming shelter in Middlebury and at the motels and hotels where homeless individuals are staying.
“We can provide case management, supportive counseling and, if the person would like it, we can refer them to short-term counseling,” Greenberg said. “And counseling may be part of the mix to help someone stabilize and weather the storm, and those things may be sufficient.”
Why can’t CSAC simply order a person to undergo an emergency mental health evaluation?
“It’s a complicated answer,” Greenberg said. “We always try to find a non-coercive way of safely dealing with the situation. There are also very clear statutes that define when somebody is able to be involuntarily hospitalized.”
Those statutes related to involuntary hospitalization require, among other things, that the patient have a major mental health disorder, poses a significant and eminent risk to themself or others and/or is unwilling to engage in voluntary treatment that would be sufficient and safe.
“When we evaluate someone to see what their mental status and safety status is, it’s not something that happens in one snapshot; it can be a fairly extensive process,” Greenberg said. “As we get more information, our determination about whether someone meets the criteria for involuntary hospitalization can change.”
Reporter John Flowers is at johnf@addisonindependent.com.