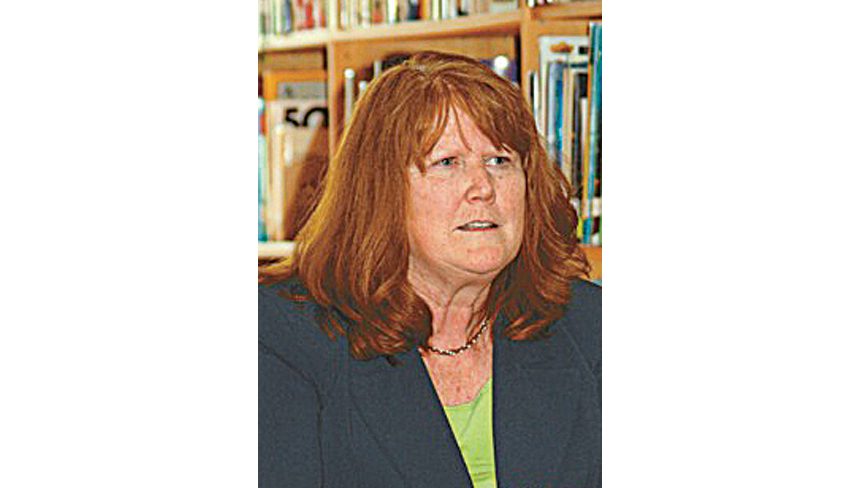 A few cases have cropped up that, so far, have not impacted the schools… But this week is the week we’re really watching.
— Jeanne Collins

BRANDON — Rutland Northeast Superintendent Jeanne Collins has contracted COVID-19 and is in quarantine with her family.
On Tuesday Collins was reporting COVID symptoms and her voice sounded hoarse, but she was well enough to continue working and is still leading the district.
There have been no positive coronavirus cases among students in RNeSU — which encompasses the towns of Brandon, Pittsford, Goshen, Sudbury, Whiting and Leicester — but there have been cases among some staff and families of RNeSU school children. The Department of Health is doing contract tracing where applicable.
The news of Collins’ diagnosis comes with the knowledge that there are now positive cases of the virus being reported in Brandon and Pittsford, according to Collins. It also comes as the supervisory union assesses the results of a survey of families and staff regarding Thanksgiving travel.
Reached at her home Tuesday morning, Collins sounded a little hoarse as she explained that she contracted the virus on or about Nov. 30 after her 19-year-old daughter tested positive.
Collins has asthma, putting her in the high-risk category. When she found out her daughter had coronavirus, Collins quickly went to a hospital emergency department to get herself checked, due to her risk profile.
Her daughter is asymptomatic; Collins is not.  She said she has no idea how her daughter contracted the virus, as the entire family has been vigilant and did not mix households during Thanksgiving.
“I tested negative the day before Thanksgiving,” Collins said. “Because I have asthma, I happened to have a pulmonary test appointment the next day and they put me on a steroid, which is standard to treat my asthma. Then my daughter tested positive on Nov. 29, and I was in the emergency room on Nov. 30.”
Collins credits her already-scheduled pulmonary appointment and the prescribed steroid from that visit for keeping the virus more manageable and keeping her out of the hospital.
That said, Collins reported that there have been positive cases recently reported in Brandon and Pittsford.
“A few cases have cropped up that, so far, have not impacted the schools,” she said. “With some of them, there were children who had been out of school longer because of the break, so they hadn’t been in school when they were positive. But this week is the week we’re really watching.”
Collins said she is also seeing staff members and student families who are doing an additional quarantine due to possible exposure to a positive COVID-19 case.
On Tuesday morning, the Department of Health COVID Dashboard indicated 100 new cases statewide of the disease caused by coronavirus. In Rutland County, there have been 62 new cases in the last 14 days, including three new cases on Tuesday.

TRAVEL SURVEY RESULTS
Collins made the decision to make all RNeSU students do remote learning on Monday, Nov. 30, the first day back after the four-day Thanksgiving holiday break. She said she had not received enough survey responses to know whether or not it was safe to send kids back to school after a period when some of them may have gone to out-of-household gatherings or traveled out of the area to potential COVID hotspots. All elementary school students went back into the schools the next day, Dec. 1. High school students went back on Wednesday, Dec. 2.
By Tuesday, Collins had received all of the survey results and said she is pleased, all things considered.
“We faired pretty well,” she said. “Ninety-five percent of the staff avoided multi-family gatherings, and 17 out of 345 staff members (or 5%) said they had participated in multi-family gatherings.”
The prohibition on multi-household gatherings came from Gov. Phil Scott’s holiday directive to avoid get-togethers among families who didn’t live under one roof. But Collins said the directive was so vague, she is relying on individual assessments of whether or not they need to quarantine for two weeks, which is the standard.
“With the guidance of the governor being so vague and asking people to govern for themselves, it’s hard to interpret that directive for every situation,” she said. “I did not and I will not get into that level of determination and have folks determine that for themselves.”
She added people also have to be able to assess their own situations regarding single people and custody issues.
Out of 842 family survey responses district-wide, 51 families (or 6%) reported that they had multi-household gatherings over Thanksgiving and are in quarantine.
“We don’t know how many kids that includes,” Collins said. “But I was pleasantly surprised. People were honest, for the most part, I believe.”
That said, this week and next are critical to seeing how badly the virus will spread post-Thanksgiving.
“This week is the week we’re really watching,” Collins said, “because anyone who tests positive this week might have impact on the school setting.”
As for Collins, she said she is feeling alright and is slowly recovering. She is also heartened by the time and effort families and staff members took to answer the survey.
“I appreciate the care people took and the honesty and caution in taking the survey,” she said. “I’m pleased to have gotten to Christmas without having had to close the school buildings, but we’re in the thick of it.”