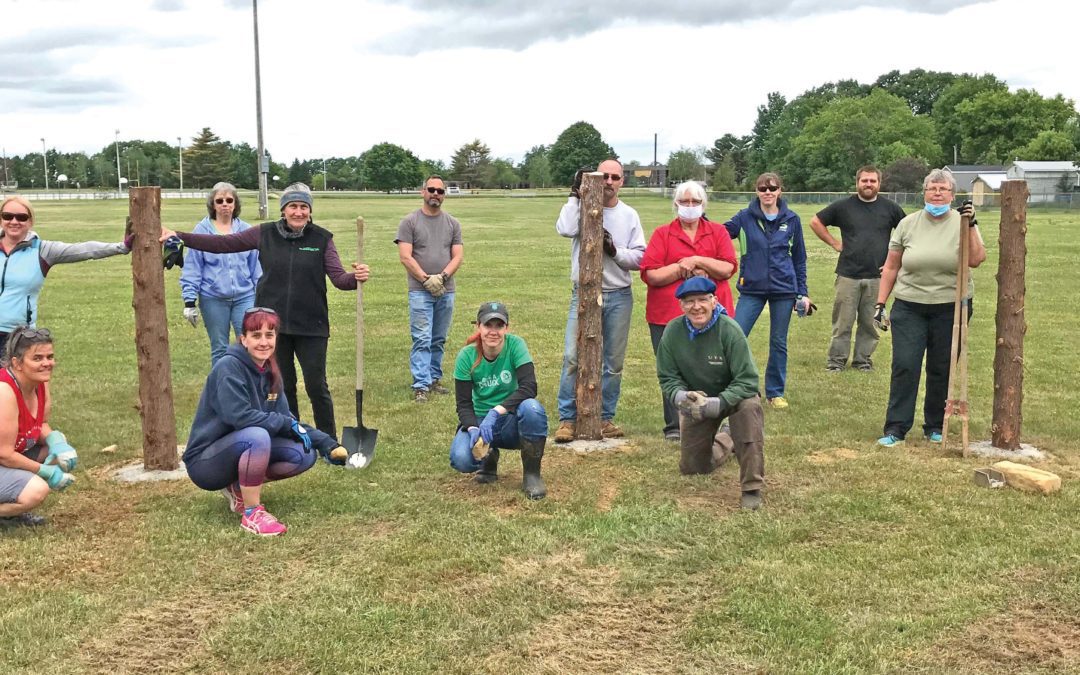 LAST SATURDAY IN Bristol 17 volunteers helped dismantle the old horse ring on Liberty Street, dug new postholes and installed 75 posts for a brand-new ring. The newly formed Bristol Horse Ring Committee, which is overseeing the project, hopes to bring horse shows, clinics and other events back to the town. Photo by Martha Chesley
By Christopher Ross

BRISTOL — Last Saturday’s chilly, gloomy weather may have been terrible for things like sunbathing, but it was perfect for the newly formed Bristol Horse Ring Committee, whose members spent the day doing a heck of a lot of work outside.
From 8 a.m. until 4 p.m., with a keen sense of the legacy they were perpetuating, 17 volunteers dismantled the old horse ring on Liberty Street, dug new postholes and installed 75 cedar posts — with the bark still on them.
“Our mission is to honor the history of the horse ring and to promote events there,” said Bristol horse trainer and Horse Ring Committee leader Lynda Malzac in a telephone interview with the Independent.
More broadly, it’s about sharing their knowledge of and passion for horses, she added.
Once the new ring is complete, organizers hope to reintroduce Bristol and surrounding communities to the joys of horses by hosting lessons, clinics and shows.
The committee had lined up a couple of events for this year, in fact, but then the COVID-19 pandemic hit, so they are now looking forward to 2021, when they aim to provide clinics on things like vaulting and draft-horse driving.
“We have lots of ideas,” Malzac said. “And the neat thing is that because this is right in the village, people can just walk over and watch the events.”

HISTORY
Malzac said she believes this will be the fourth horse ring to be built at the Liberty Street location, which is owned by the town of Bristol.
The first ring was built in 1956, under the leadership of Malzac’s mentor, Juna Perlee, who also founded the Bristol Riding Club.
For years, the Riding Club hosted shows every spring and autumn, which drew 50 or 60 horses, Malzac recalled, and a lot of spectators.
In 1966, Perlee founded the 4-H Riding Club.
Perlee’s granddaughter Chanin Hill remembers those days.
“I grew up riding in the ring,” she said.
Hill estimated that hundreds of lessons and horse shows have taken place at that spot over the decades. Sometimes the ring was so well-worn that they overspread it with bark to keep the dust down.
It was also a meet-up spot for kids with horses, who would then go off riding together around town.
“The ring was part of growing up in town with horses,” Hill said. “I would like to see it become that place again.”
Malzac estimates that there were 25 or 30 horses in or close to Bristol Village in those days — and a lot of dirt roads. Now, many of those roads are paved, with fast-moving traffic and narrow shoulders, and there are only a handful of horses left in the village.
And over the past 10 years, the previous riding ring had fallen into disuse and disrepair.
“That place means a lot to me, and I felt it was disrespectful to leave it,” Malzac said. Either it should be rebuilt, she thought, or taken down.

NEW LIFE
Malzac had no trouble finding support for a new ring. She talked to a few local horse families and experts, who ended up donated both time and resources to the project.
She also reached out to Bristol Rec Department Director Meridith McFarland, who expressed enthusiasm for the idea and who helped out on Saturday, hauling away the remnants of the old fencing.
“Lynda has taken charge and really made things happen,” McFarland said.
Now that the posts are set, all that remains is to attach the hemlock planks, which the horse ring committee plans to do when they get another day of work-friendly weather.
When it’s up and running, the ring won’t necessarily be limited to horse-related activities, however, said Malzac and McFarland.
For instance, with the addition of temporary mesh fencing, the space could easily be used for dog-agility training, they said. McFarland, who used to work at the Sugarbush ski resort, has already begun exploring the idea of using ski-race fencing for such a purpose.
The space could also be used for a range of community events.
But for now Malzac’s main focus has been on bringing horses back — and honoring Juna Perlee in the process.
“We’re really excited about promoting horses and getting new activities in the ring,” she said.
Reach Christopher Ross at christopherr@addisonindependent.com.