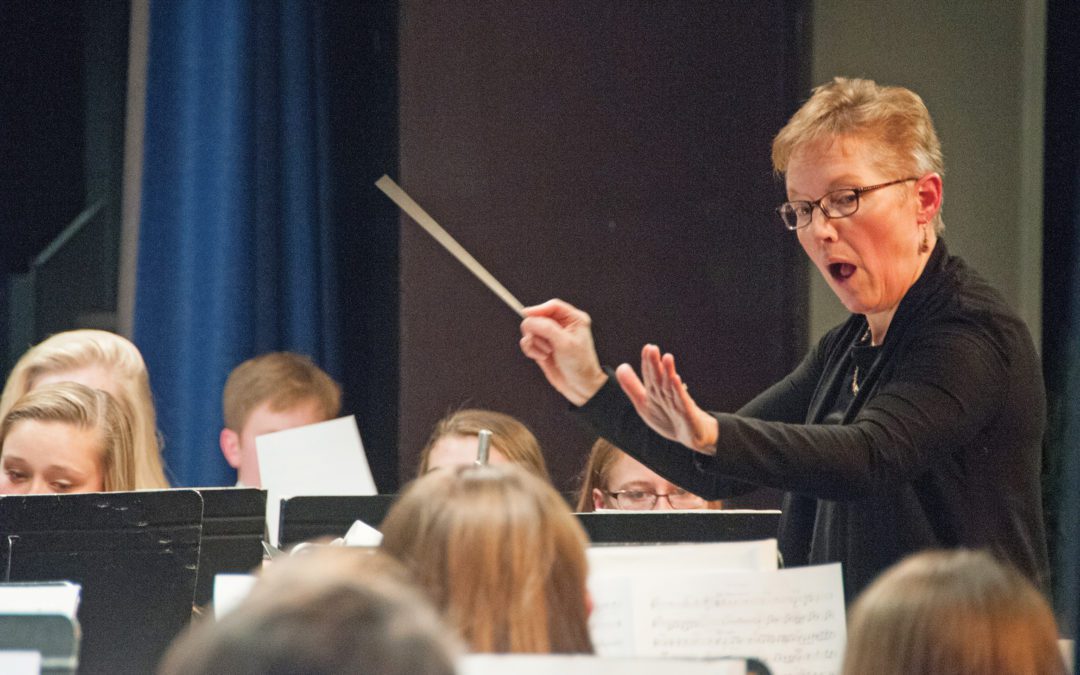 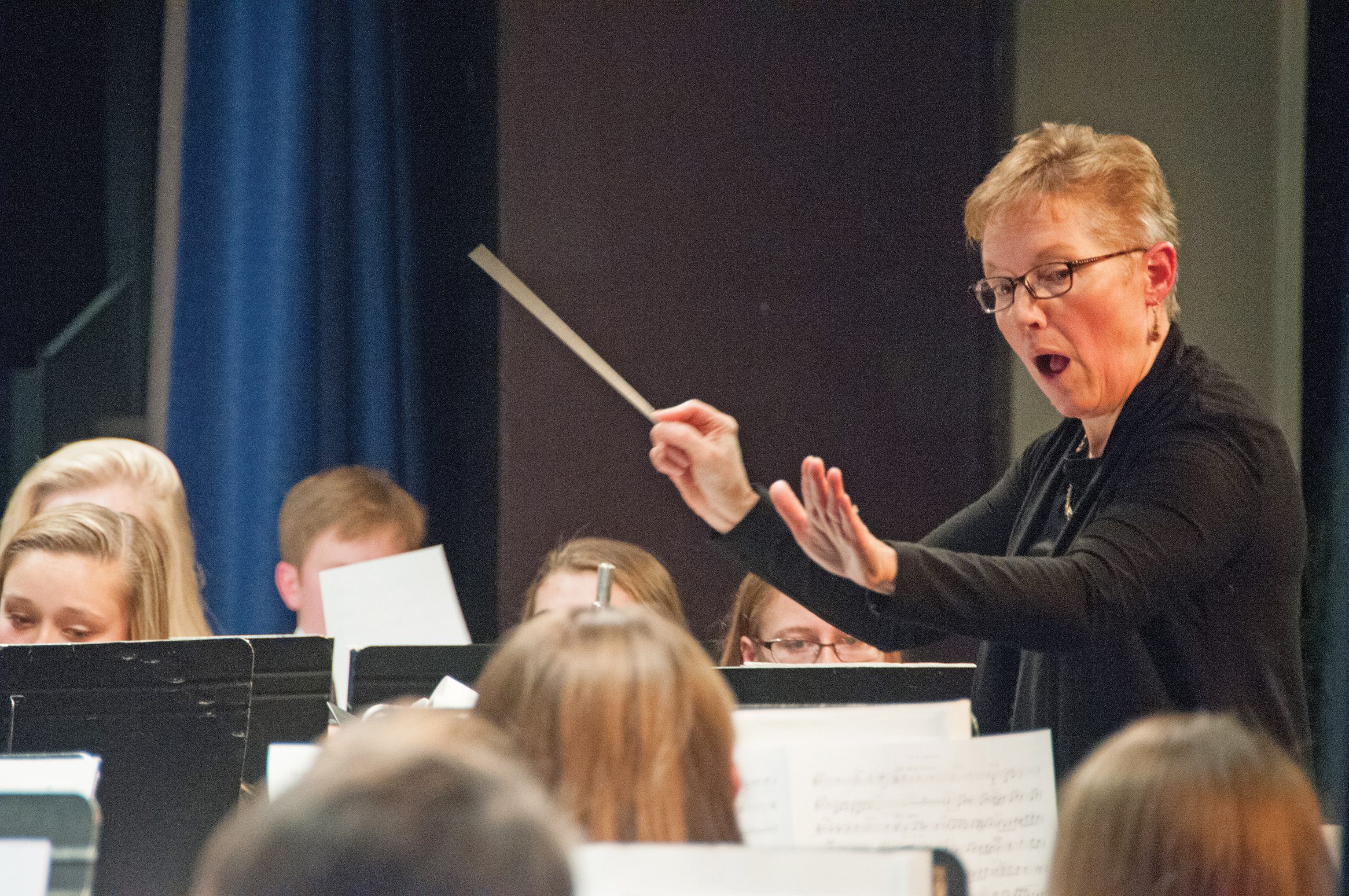 VUHS MUSIC TEACHER Sue O’Daniel directs the VUHS Symphonic Band. O’Daniel is retiring after 42 years leading the school’s music program. She is credited with creating a love of music in generations of students there and bringing music to the wider community.

She was always trying to challenge us to be the best musicians we could be … You can also transition that into your real life. She just knew we could give more than we thought we were capable of.
— 2015 VUHS graduate K.C. Ambrose

VERGENNES — A twist of fate in the summer of ’78 led to Sue O’Daniel’s 42-year career as the Vergennes Union High School music teacher.
Without that happenstance, a conversation at a University of Vermont summer music camp, generations of VUHS students would not have been inspired in the same manner.
The Vergennes City Band would not have become a Monday night summer fixture on the city green.
The VUHS auditorium would not have sold out multiple times every fall for the school’s annual musical.
How great has O’Daniel’s impact been in the Vergennes area?
VUHS math teacher Nancy Ambrose, her colleague for 40 years and parent of three of O’Daniel’s music students, is well qualified to answer.
“When I started here in 1980, the band was beginning to grow. It was nothing when she started here,” said Ambrose. “Vergennes was not a music community. She has created that community.”
What happened at that summer camp to change the course of history?
O’Daniel landed there after graduating from Boston University in 1978 because she couldn’t find work. She had looked around Massachusetts, but schools were cutting back music programs.
And O’Daniel said her gender and stature — she doesn’t top five feet unless wearing heels — hurt her chances.
She recalled one interview in New Hampshire with a cigar-chomping school official: “He looked at me and said, ‘I don’t see how a short woman like you would ever be able to control a class.’ That’s what I was facing. I was crushed.”
Then at UVM another counselor told her about a last-minute opening he was no longer pursuing. It was in Vergennes.
“I said, ‘Where’s that?’ And he said I’m going to cancel, why don’t you call them and see if you can send them your resume and get an interview. So I did,” O’Daniel said. “Anna Husk was on the school board on the time, and Anna said, ‘We don’t have anyone else. Let’s give her a shot.’”
Thus began a four-decade mutual love affair. O’Daniel didn’t know it right away and did cast around for other jobs, but came to understand the grass would “never be greener.”
“I wasn’t sure I wanted to stay in Vergennes my whole career,” she said. “But I realized I had it all at Vergennes.”

POSITIVE FEEDBACK
Early on O’Daniel, now 63, acknowledged the growing pains of a novice educator: “My first two years were very enlightening. I’m not sure who learned more, me or the students.”
What did O’Daniel learn?
“In order to be in front of kids you’ve got to be really organized,” she said. “But most of all my students helped me to be honest with them in whatever I was trying. They said, ‘Don’t tell us we sound good if we don’t. If we don’t sound good tell us we don’t sound good. Just be honest with us.’ And I’ve always done that with kids.”
VUHS choral teacher Cailin O’Hara said O’Daniel to this day seeks personal growth.
“She still reaches out to colleagues for ideas. She’s never stopped learning herself,” O’Hara said.
O’Hara said O’Daniel works harder than anyone she has ever met — after school, evenings and weekends — on behalf of her students.
“If students aren’t understanding something she never gives up,” O’Hara said. “It’s ‘what do I need to do to make it different for the student to understand this.’”
O’Hara has seen O’Daniel’s multi-generational impact.
“It was really fascinating for me when I came in and saw she taught the parents, and now she has their kids, and they’re so close to her and want their kids to learn from her,” she said. “It’s just a really thoughtful, caring community around her.”
One of her students was 2015 VUHS graduate K.C. Ambrose, daughter of Nancy. O’Daniel taught Ambrose for six years; K.C. played in the school’s orchestra and pep and jazz bands, and attended O’Daniel’s morning meeting.
Ambrose talked about O’Daniel’s “drive, and just the kindness in her heart,” the welcoming atmosphere in the morning, and her willingness to help students.
“If someone did need a little bit more she was the first one to recognize that,” she said. “She’s just an incredible person.”
Ambrose said O’Daniel could teach anyone to become a musician and bring out the best in her students, many of whom have gone on to have careers as artists, educators or even instrument crafters.
“She was always trying to challenge us to be the best musicians we could be,” she said. “You can also transition that into your real life. She just knew we could give more than we thought we were capable of.”
Nancy Ambrose talked about the VUHS music program’s growth, estimating the band has gone from about 20 members to 25% of the student body. And as a ticket seller for the VUHS musicals she knows how popular they have become under O’Daniel’s co-direction.
“I had people call me from around the state wanting to get a ticket,” Ambrose said. “It’s definitely a team effort, but Sue spearheaded it. We didn’t have a musical like that when Sue first started.”
And then there are her personal qualities, Ambrose said.
“She’s one of the first people if something happens to you personally that you hear from,” Ambrose said. “She’s just that kind of person.”

LOOKING BACK
O’Daniel started out in music as a Bennington 5th-grader playing piano, but by middle school preferred the trumpet: “I loved playing trumpet in the band. There was nothing in my life that matched that.”
In 7th grade she was recruited for French horn, but she didn’t enjoy middle school music for the instrument: “My part was dull, and the trumpets were playing. What was the value of playing this?”
O’Daniel then took matters into her own hands.
“I don’t remember how my French horn got dented, but it got sent away for the summer. I dropped it, actually,” she said. “I got to play my trumpet all summer, and I was happy again. I went back to 8th grade, and there was that French horn, waiting for me.”
The high school band director recognized her talent and placed her in both the middle and high school orchestras, where horn music was more interesting. A woodwind quintet and private lessons followed, and she was hooked: “It was like, oh, this is what I can do. This is cool.”
By then another plan was already percolating.
“I think by 8th grade, definitely by 9th grade, I knew I wanted to be a band director,” she said. “I just loved being in a group and having the conductor work with us on the music, to take it from sounding awful to sounding amazing.”
Soon she led the pep band, picking out music and “helping people learn their parts.”
“I found out I really liked being in charge,” O’Daniel said.
After an active high school music career that included playing with the nearby Williams College Orchestra, she chose BU for its urban environment and Boston’s world-class music scene.
Then came her teaching career, the rebirth of the Vergennes City Band (which to this day plays on Monday nights, because that was her night off from her second job, serving meals at the Dog Team Tavern), the co-direction of the Vergennes Congregational Church Choir, and her performances with the Champlain Philharmonic Orchestra, the Green Mountain Horn Club and other ensembles.
And, of course, the musicals.
“Every musical that we did was a highlight for me,” O’Daniel said. “There is nothing like it. You take it from reading information off a page to putting it on the stage. It’s amazing.”
She also described the highlights that make teachers’ days: “Whenever a student learns something new and gets excited, that’s a highlight. They’re able to manage something on their instrument they couldn’t, that’s the best part. Music is a total part of me. I love it as a player, and I love it as a teacher.”
In the 1980s she met her husband, Michael. They added a daughter to the four children he brought along.
She considered retiring in 2019.
“Last year I really wrestled with the decision, but I kept crying,” she said.
This year an early retirement package the district offered factored in, as did her husband’s retirement and the health of her mother, who is still in Bennington.
“I was just like, it’s time,” she said. “I wanted to be available to my mother and brother in Bennington, and even more to my family.”
O’Daniel will stay in Vergennes and teach privately from her home, and continue to play with all her bands.
And at the end of a long interview her voice cracked when asked if she had anything to add:
“I just want to thank every student I’ve ever had in school, and every teacher I’ve ever worked with at Vergennes High School. And I want to thank my community for being so supportive and making this career the best ever.”