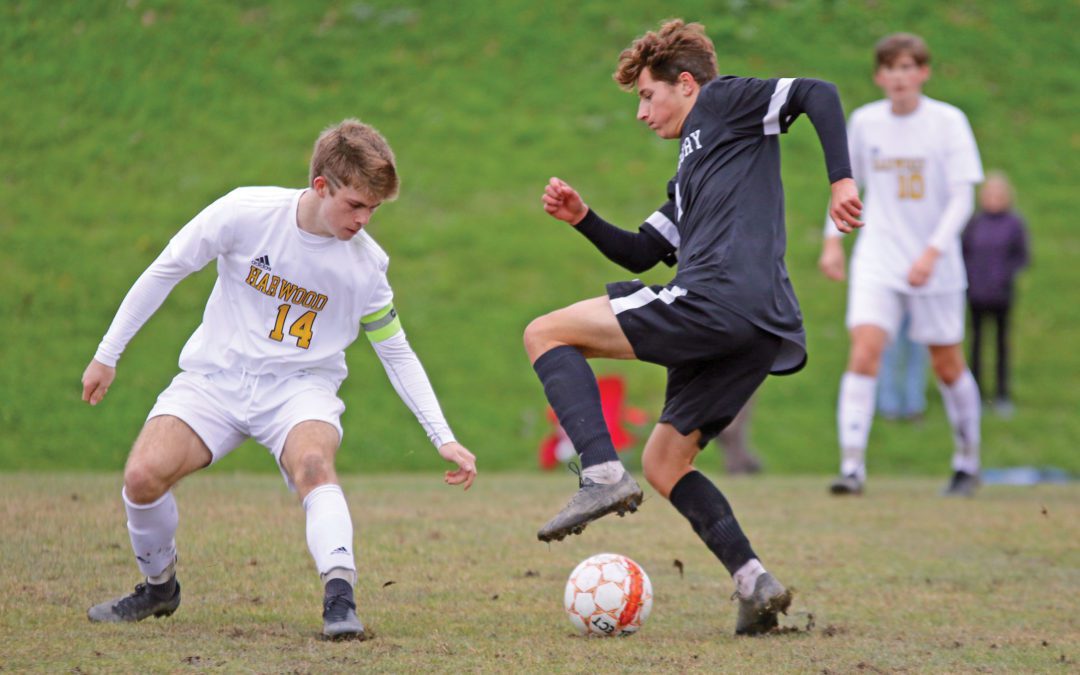 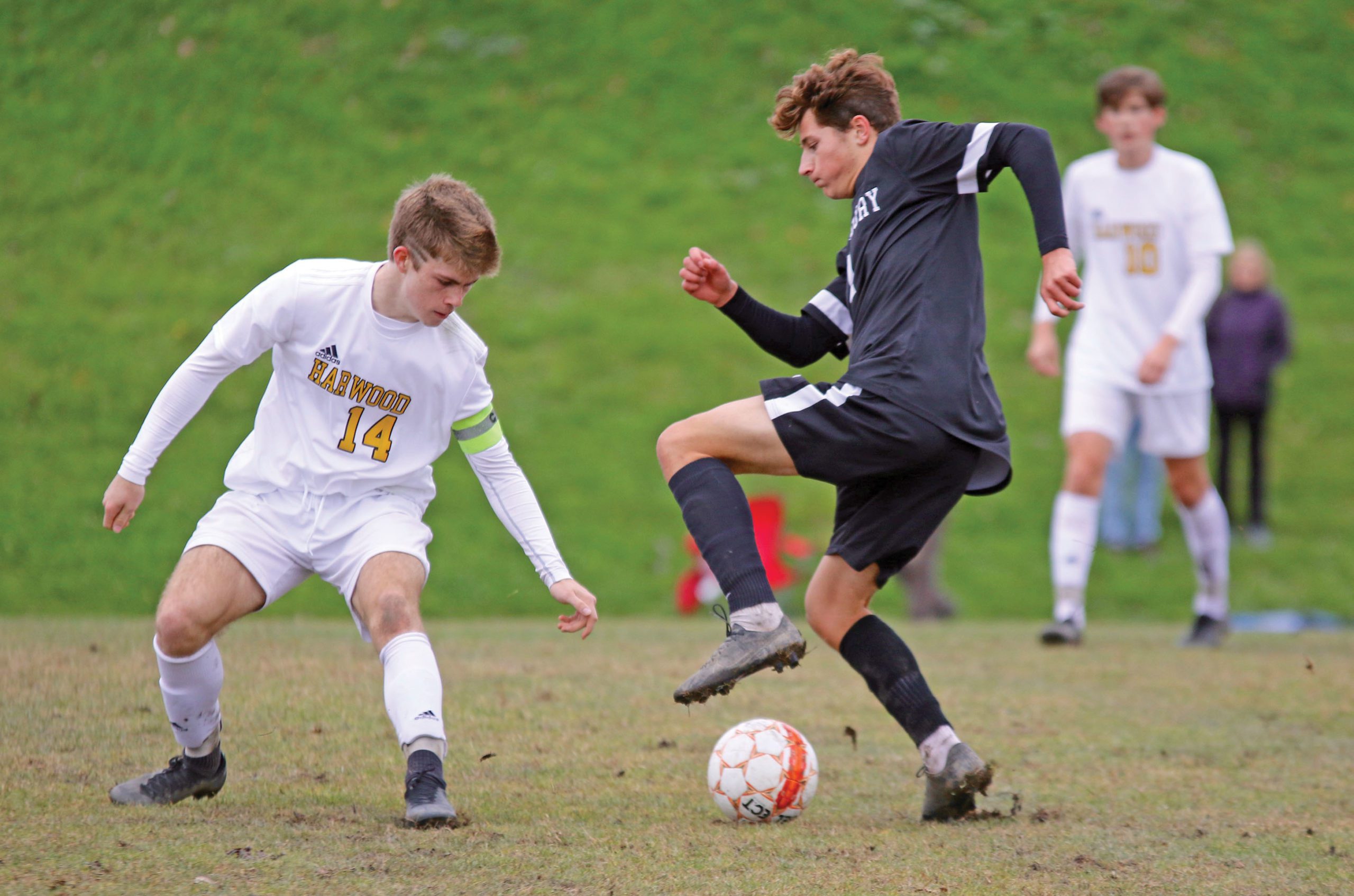 MIDDLEBURY SENIOR EBEN Jackson shows trickery to beat a Harwood defender before laying off the ball to Alex Bleich whose cross was fired home by Andy Giorgio for the Tigers’ first goal in their 2-1 home win on Tuesday.
By Andy Kirkaldy

MIDDLEBURY — It took 82 minutes and 54 seconds, a lot of gritty defense, and an accurate finish after a little bit of a lucky bounce for the Middlebury Union High School boys’ soccer team to make history on Tuesday afternoon with a 2-1 victory.
That finish came from Tiger junior striker Alex Bleich with 2:54 gone in overtime in a Division II semifinal, and it sent MUHS to the program’s first-ever boys’ soccer final.
The 14-3 Tigers, seeded No. 2, will take on No. 1 Stowe (16-0-1), the favorite since Raiders moved up to D-II this fall after winning seven straight D-III titles. The final will be played at South Burlington High School at 10 a.m. on Saturday.
Bleich’s goal came against No. 3 Harwood, which had tied the game at 1-1 with a dominant second-half performance.  The 13-3-1 Highlanders outshot the Tigers, 14-1, in the second half after MUHS had controlled the first half and taken a 1-0 lead on an Andy Giorgio goal.
But the Tigers rallied in overtime and worked the ball deep down the right sideline, setting up junior center midfielder Oliver Poduschnick for one of his long throw-ins into the Harwood box.
Poduschnick targeted Bleich on the near side of the box. Bleich nodded the throw toward the goal, and then turned and moved toward the near post. A Harwood defender attempted to clear the ball, but it went right to Bleich, and he buried a 10-yard blast high into the far side of the net to trigger a Tiger celebration.
Bleich described the action from his point of view.
“It was a set play. We had Oliver Poduschnick throw it in from the sideline, and I was supposed to flick it on to somebody else,” he said. “And the ball just ended up going to a Harwood player’s feet, and he kicked it to me, and I just shot it in. It was amazing.”
The Tigers were fortunate Bleich was on the field. Near the end of regulation a Highlander unintentionally drilled the ball from point-blank range into the side of the Tiger’s head. Bleich was down on the field for two minutes and went through the concussion protocol before being cleared to return for overtime.
“It hit me right in the ear. I couldn’t hear much out of my right ear. They took me off. I started feeling a little better, had my balance, so I went back in,” Bleich said.
He returned after the Tigers talked about turning the tide in overtime and putting the Highlanders back on their heels, something they then managed to do after facing pressure throughout the second half.
“We just realized we needed to get our heads in the game. Our fans were here, and we didn’t want to disappoint them. The whole team, the boys were buzzing. We needed a win,” Bleich said. “It was basically just get more energy and get the ball up more often, get the defenders to face backwards.”
In the first half the Tigers were passing smartly (Owen Palcsik and Poduschnick did good work), winning 50-50s and forcing Highlander errors. Their possession did not always translate into shots, but Harwood goalie Oliver Hammond made all three of his saves in the first half, two in the early going.
One came off Tiger senior Eben Jackson: Hammond came out to cut down the angle and kick away Jackson’s 15-yard bid. The other came from a Bleich one-timer from the 18 set up by Jackson.
Finally the Tigers broke through in the 28th minute. Bleich carried to the left end line about 20 feet in from the corner flag and sent a hard, low left-footed serve that carried to Giorgio about 10 yards out from the right post. Giorgio one-timed a hard shot back inside the left post, and MUHS led.
With the steady wind at the Highlanders’ back in the second half, they were relentless and started winning the ball and stepping into Tiger passing lanes. Their best chances came on their eight corner kicks, and Tiger defenders Spencer Doran and Eddie Hodde in the middle and Devon Kearns and Hunter Munteanu on the flanks took turns blocking shots, while goalie Owen Lawton made all four of his saves in the second half.
Tiger Coach Reeves Livesay praised his back line.
“Our defense really worked hard, and they played well together. They were under a lot of pressure. There was a lot of direct play, which isn’t always our strength, but I thought they did a great job of playing together and backing each other up,” Livesay said.
Harwood scored on its seventh corner kick, with 12 minutes to go. Cole Hill headed the ball sharply inside the right post on a Hayden Adams serve from the right side.
The Tigers had a chance late in regulation after senior middie Anthony Garner stole the ball, but a sliding tackle dispossessed him as he broke into the box.
Livesay summed up the whole experience.
“We came out and played a strong first half and created some really good opportunities. It’s great that we got one of them. And then certainly in the second half there was a stretch there where we were just hanging in there and trying to extend the game,” Livesay said. “And I thought the boys did a great job of rebooting for overtime. They were very tired, but they regrouped and went out there and created an opportunity.”
And now the Tigers have an opportunity to play for the program’s first title.
Livesay said he didn’t plan any great tactical innovations before Saturday.
“We’ll just go up and have some fun,” he said.
And when asked what would be critical on Saturday, Bleich pointed to the Tigers’ frame of mind.
“Just the energy. It’s the most important part, in my opinion,” he said. “Coming out with a good mindset is the most important thing you can do, just make sure you’re on the top of your game.”
Andy Kirkaldy may be reached at andyk@addisonindependent.com.