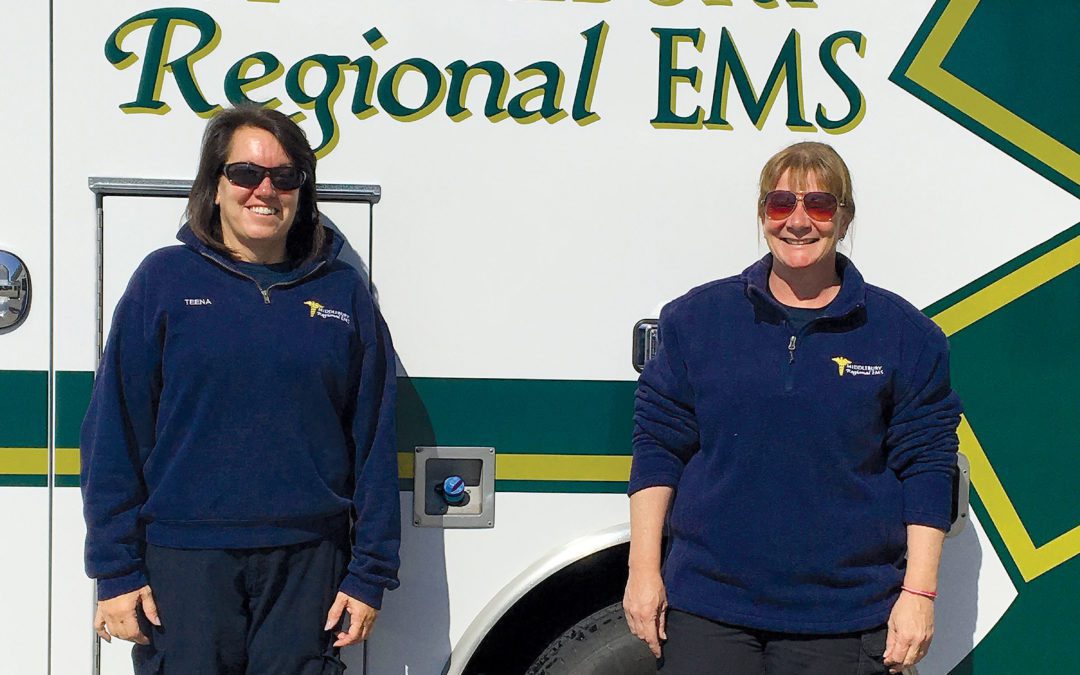 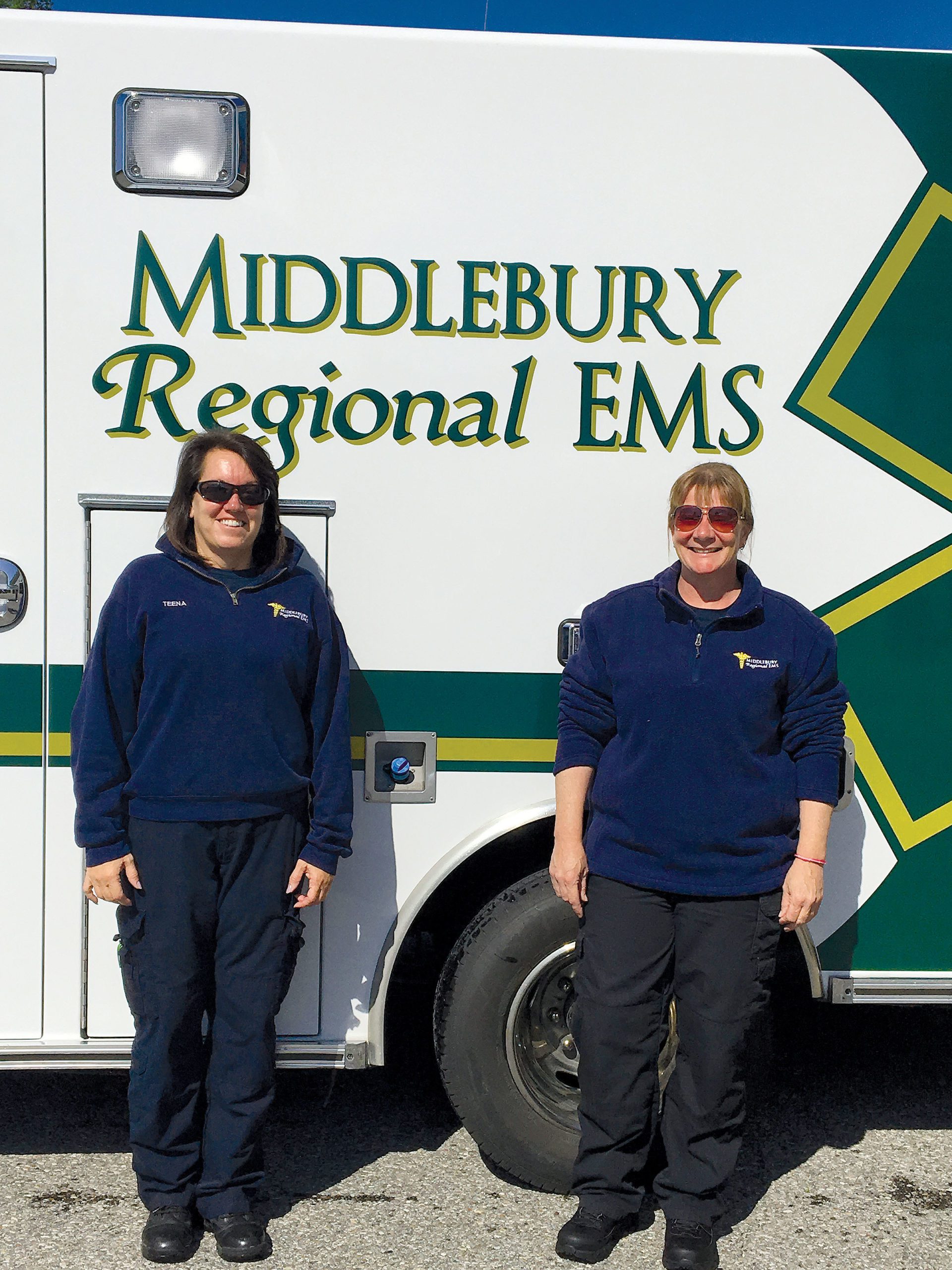 MIDDLEBURY REGIONAL EMS Director Teena Betourney, left, has turned over the organization’s administrative reins to former Deputy Director Kate Rothwell. Rothwell, a paramedic, will serve as interim leader as the MREMS board searches for a permanent director.
By John Flowers

MIDDLEBURY — The Middlebury Regional EMS (MREMS) board has once again looked within the organization’s ranks for new leadership. The board has picked Deputy Director Kate Rothwell to guide the county’s largest ambulance service during the search for a new executive director.
Rothwell, also a paramedic and MREMS’s lead trainer, is taking the reins from Teena Betourney, who recently decided to pare back her duties as she contemplates retirement. Betourney will serve as the organization’s office manager and has pledged to assist in the leadership transition.
The nonprofit MREMS has 51 full- and part-time workers, including 15 volunteers. The staff includes dispatchers, EMTs, advanced EMTs and paramedics. The Middlebury-based nonprofit operates 24 hours a day serving folks in Middlebury, East Middlebury, Salisbury, New Haven, Ripton, Orwell, Shoreham, Whiting, Bridport, Cornwall and Weybridge.
“It’s an exciting opportunity,” Rothwell said of her new role. “There’s a great group of people who work here.”
Rothwell joined MREMS six years ago. She previously worked for both Regional Ambulance Services of Rutland and Vergennes Area Rescue Squad. Rothwell — who has diligently worked her way up the emergency responder ladder — joined MREMS after receiving her paramedic’s certification.
She’s been in the health care field for around 14 years.
Rothwell will continue to work ambulance shifts with MREMS in her new leadership role. She is open to applying for the full-time director’s job, if her skills end up pairing well with MREMS’s needs.
“I just want to make sure I’m doing the right thing for the organization,” said Rothwell, who is also a member of the Bridport Volunteer Fire Department.
MREMS board Chairman David Pistilli welcomed Rothwell into her new role and said the board hopes she applies for the permanent director position.
“She has our complete confidence, as she does that of the staff,” he said.
Rothwell will have her longtime friend and colleague Betourney to teach her the ropes.
Like Rothwell, Betourney joined MREMS six years ago. She was managing Porter Hospital’s Patient Access and Communications Department. Porter at the time was switching its communications and answering service functions over to MREMS. Betourney was asked to oversee the switch over.
“I spent approximately three months here getting that all up and running and training people when (then-MREMS Director Bill Edson) offered me a position here as communications supervisor,” Betourney recalled. “I weighed my options. I enjoyed this place and the people so much, I decided to bite the bullet and come here. So I did.”
It’s been quite the rollercoaster ride sine then, Betourney acknowledged.
She’d been in her MREMS job for around two months when Edson gave his notice during the spring of 2014. Other senior administrators left soon thereafter, leaving a leadership vacuum that the MREMS board asked Betourney and a bookkeeper colleague — Lisa Northup — to fill pending the hiring of a new director.
“Times were rough here,” Betourney recalled.
Having had managerial experience, Betourney agreed to the sudden promotion. She took an EMT course so she could be more useful in the ambulances as well as in the office.
“I felt if they wanted me to tell these (employees) what to do or how to do it, I should know what they’re doing and how they’re doing it,” Betourney said.
The MREMS board hired a new director, Ric Lavallee, during the spring of 2015. But MREMS directors let him go after just 10 weeks on the job.
“He was not a good fit for the organization and did not mesh well with the people, the mission and peer organizations we work with,” Pistilli told the Independent at the time.
That’s when Pistilli and his colleagues asked Betourney and Northup to again co-lead MREMS, this time on a permanent basis.
Again, they accepted.
Betourney helped the organization weather another storm in late 2017 after her co-director (Northup) pleaded guilty to two felony charges of embezzlement, stemming from allegations she stole $7,802 from MREMS during more than a year to pay for personal items, gifts for friends and her own medical expenses.
“We spent months doing forensic auditing, researching, talking to lawyers and reassuring the staff that finances were good and we were going to keep moving forward,” Betourney said.
She then led MREMS on a solo basis before recently turning over the reins to Rothwell.
Pistilli said board members accepted Betourney’s resignation with regret, reiterating their regard for her dedication to the organization, and welcomed her to stay on in a capacity to be determined by Rothwell.
“Her impact will continue to be felt,” Pistilli.
While there have been challenges along the way, Betourney has enjoyed her time with MREMS.
“I have enjoyed it immensely,” Betourney said. “It has very much been a joy for me to come to work and be part of such a great organization and work with such amazing people.”
That said, she’s ready for the next chapter of her life — one that includes a less hectic schedule and more opportunities for travel and relaxation.
“I want to reduce my role as the manager here,” she said.
Her new role allows her to do more EMT and office work, such as helping with client subscriptions, ambulance registrations and insurance matters.
She promised to not leave Rothwell and the organization in a lurch.
“My goal is to stay here as long as they’ll have me or until I decide I’ve shared enough information and they know everything, and then I’ll start to ease into retirement,” she said.
Reporter John Flowers is at johnf@addisonindependent.com.