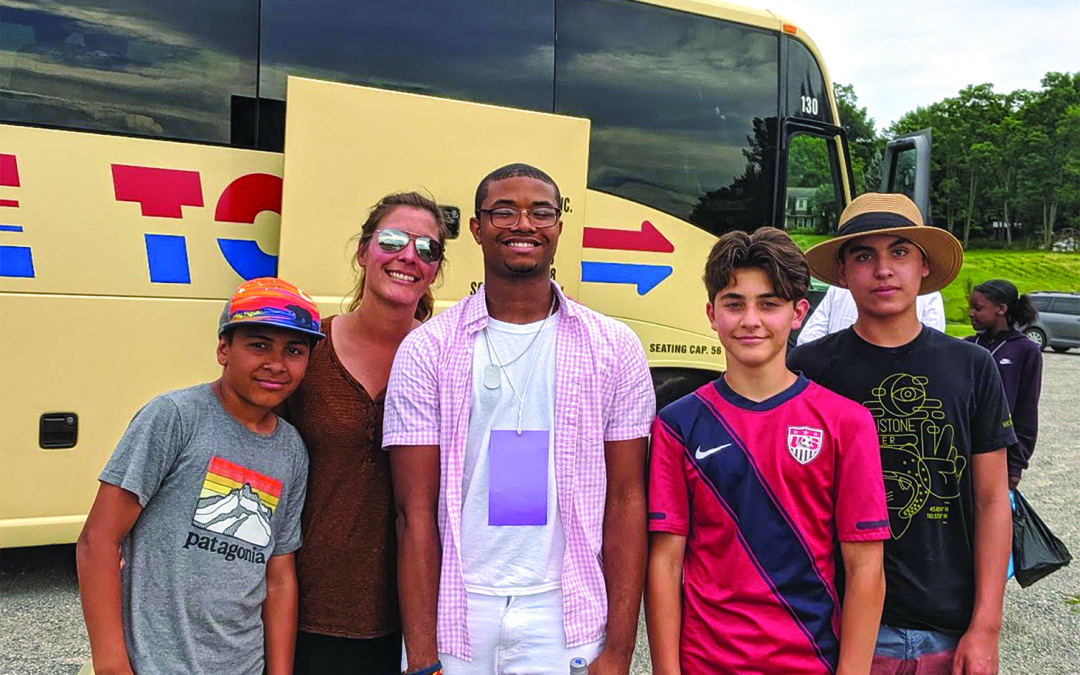 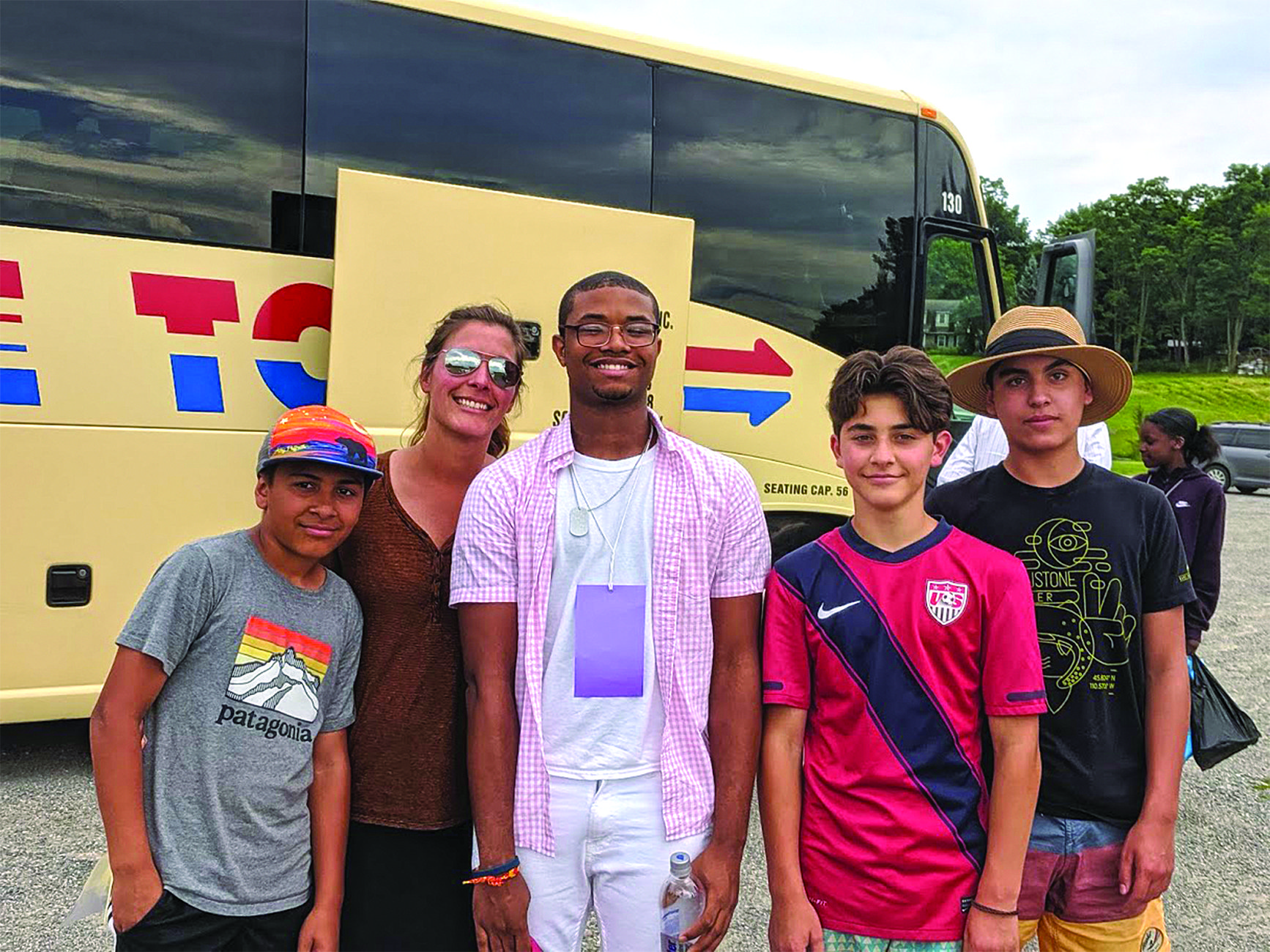 KEITH HARRIS, CENTER, is greeted by the Atocha family at the Fresh Air Fund drop off in Vergennes on June 28. This marks his 10th year with the Lincoln family. Photo courtesy of Marion Sullivan
By Nora Peachin

VERGENNES — A bus, travelling from New York City to Vermont, speeds past a herd of cows. A little child points out the window and says, “Do you know that’s where chocolate milk comes from?”
This is one of Marion Sullivan’s many treasured memories from her work for the Fresh Air Fund, a nonprofit providing summer experiences in the countryside for underprivileged children from New York City.
On June 28, Sullivan made the trip again, accompanying a cohort of city kids to Vergennes and South Burlington, to meet up with their Vermont host families. She is responsible for about 35 families this year. Throughout the state, 250 families are participating in the Fresh Air Fund program this summer.
Seven families awaited their host kids anxiously in the parking lot of the Christian Reformed Church in Vergennes that Friday. The air heavy with humidity, host parents and siblings leaned against hot cars and discussed plans for their guests — swimming, hiking, summers filled with outdoors activities and Vermont exploration.
Finally, the highly anticipated bus rolled into the gravel lot; eight kids were efficiently unloaded and united with their host families. Some kids were meeting their families for the first time, others were returning after multiple summers spent together.
Tim Cianciola and his wife Jenny have been hosting Bobby Aris for four summers; Tim Cianciola was excited to welcome Bobby back for a fifth. “Bobby is a really great kid — well behaved, studious, happy to hang out with old people,” he said.
The Cianciolas love to take Bobby boating and swimming. The couple also appreciates learning about Bobby’s day-to-day life and understanding how different it is from the way they live.
Bobby described the Cianciolas’ house as a “second home.” He enjoys doing things he cannot do in the Bronx, his home. Although he “had jitters the first time, (he is) now getting the hang of it,” Cianciola said, and Bobby has learned to “seize the moment” and make the most of his time in Vermont.
Two cars down, Toby Goldsmith awaited her host child, Sophia, who she and her husband, Lee Weisman, have been hosting for three years.
When Goldsmith spoke with Sophia’s father over the phone, he expressed that he “really wanted her to play outside because she can’t do that safely in her home.” So, Goldsmith and Weisman take Sophia berry picking, sight seeing, fishing, swimming and they often play bocce ball together.
Like Cianciola, Goldsmith wants to share a different way of living with her host child. And, in doing so, Goldsmith has grown to appreciate and bond with Sophia. “She is really fun, a wonderful person; I feel lucky that we get along really well,” she said.
Sullivan described the homestay experience as a “two-way street, although the ultimate purpose is for the children.”
Sullivan has been involved with the organization since the 1960s, when she had a Fresh Air sister. As an adult, Sullivan and her husband, John, hosted children for 25 years — seven kids total. Today, the Vergennes couple still stays in touch with them all.
“It’s a life long relationship that we’ve built,” Sullivan explained.
Eventually, Sullivan decided to start volunteering. As the local volunteer coordinator, she recruits other host families, supports them during the kids’ stays, and helps interested people get involved. She also escorts participants on the bus ride up to Vermont.
Sullivan is passionate about her work. “We hear stories every year at our national conference of children whose lives were really changed by their experiences and they were given a direction for their future,” she said.
Sullivan acknowledged that while homestays in Vermont go for as little as one week to the whole summer, she believes that no matter how long the visit “to give a child the opportunity to see a different way of life and a different setting and meet people from other cultures” has the potential to lead to great things.
One of Sullivan’s favorite moments in her Fresh Air experience was when one of the first girls she hosted became the first African American woman to graduate with a PhD from the University of Illinois. “Some of the credit she gives to her Fresh Air experience. Certainly not all, but some,” Sullivan said.
Sullivan places equal value on these types of success stories as she does on everyday experiences of kids learning about life in the country and relationships being formed. Marion and John Sullivan still receive calls on Mother’s Day and Father’s Day from their former Fresh Air kids.
Marion Sullivan is always looking for more host families and volunteers. If you are interested in getting involved, you can contact her at 802-877-3028.