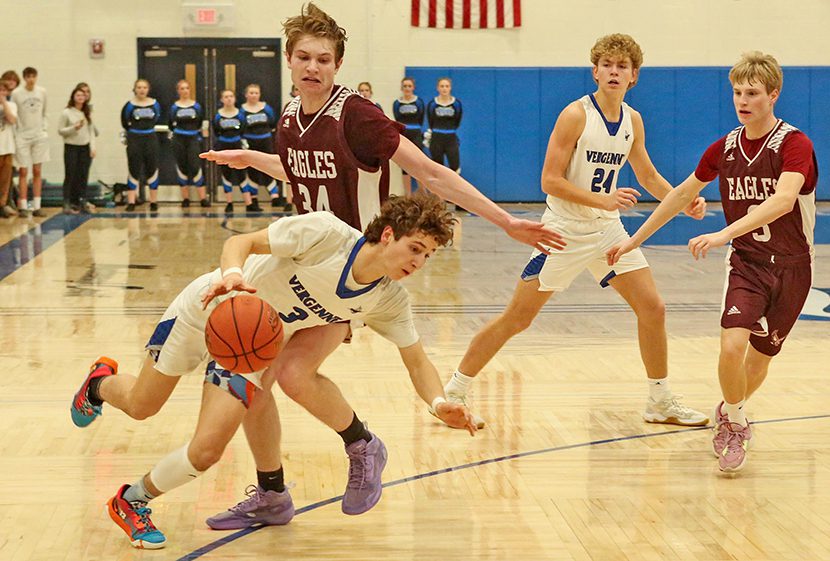 VUHS GUARD ELIJAH Duprey makes it past Eagle forward Ian Funke during the game in Vergennes this past Friday, but not without taking a bump from the Eagle. Photo by Buzz Kuhns
By Andy Kirkaldy

VERGENNES — In front of a big home crowd and raucous student rooting sections, the Vergennes Union High School boys’ basketball team on Friday led almost throughout against Mount Abraham, but had to hold off a spirited late rally to prevail, 48-44.

Commodore guard Abram Francis nailed five three-pointers and led all scorers with 21 points. But his biggest contribution might have been grabbing the rebound of a missed Eagle three-pointer with 5.8 seconds left, which enabled his team to cling to a two-point lead. That board led to clinching free throws from VUHS guard Elijah Duprey.

“They had a no-quit spirit. They came at us until the end. They just battled, and they put themselves in a position to tie or potentially win the game.” 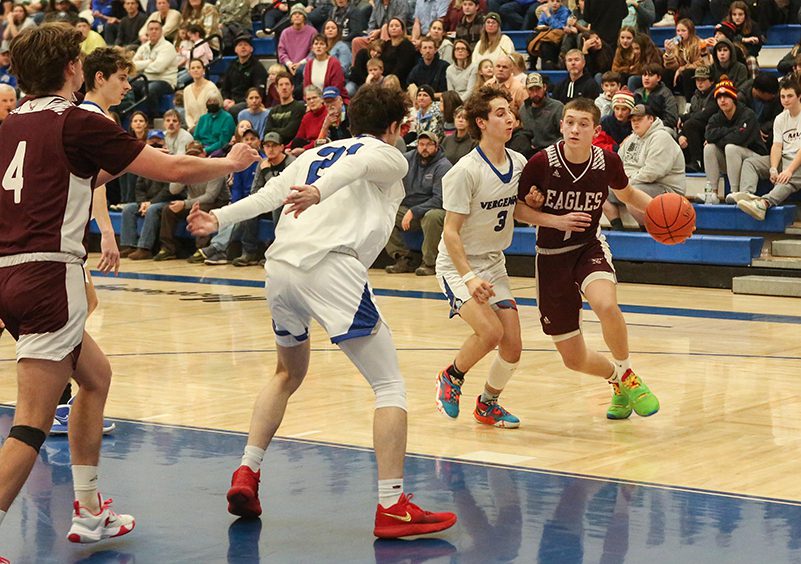 And he was relieved to see his defense hold up at the end and Francis come up with that Eagle miss off the front of the rim.

“They were able to come up with one great stop and one great rebound by Abe,” Carter said. “I was elated. That was awesome.”

Eagle coach Martin Clark’s team dropped to 2-6, with two losses, including Friday’s, coming in the final seconds. He had no complaints about his team’s heart.

“It was a heck of an effort, both teams,” Coach Clark said. “And, you know, they made shots in the first half, and we didn’t. So we were in the wrong position at that point. But I loved the way we kept fighting. We kept getting closer and closer and got it right back to having a chance.” 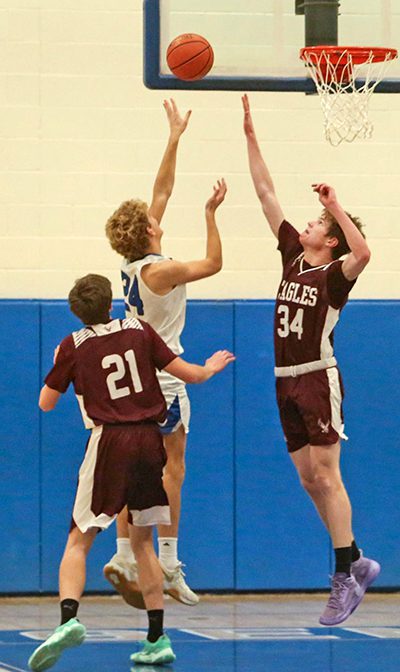 COMMODORE FORWARD OAKLEY Francis puts up a shot while Mount Abe’s Ian Funke defends on this past Friday in the VUHS gym.
Photo by Buzz Kuhns

But Clark wished a few more shots had dropped in that first half, which ended with his team on the short end of a 29-21 score. And the Eagles turned the ball over nine times after the break, four times early in the fourth quarter when they were trying to make up ground.

“We made some mistakes, and we’ve got to clean those up if we want to win a game like that,” he said. “The good news is we can get better. We just have to keep working.”

The Eagles got off to a decent start. A coast-to-coast venture by forward Ian Funke at 3:03 of the opening quarter turned into a three-point play and gave Mount Abe a 7-6 lead, also due to their zone defense frustrating the Commodores.

But VUHS closed the period on an 8-1 run sparked by two Francis threes and Duprey’s driving layup. Francis finished with four threes and 12 points in the period, while Funke and forward Dom DeNapoli combined for all the Eagle points.

The Eagles started to get a little traction against the VUHS man-to-man defense in the second period. Guard Hayden Lutz came in to spark the Eagles with five points and a transition assist to Funke, and DeNapoli set up forward Norman Benoit in transition and hit a layup. But VUHS added two points to its lead by getting threes from Francis, Devon Brisson and Levi Cogger. In all, five Commodores scored in the period to make it 29-21.

Both teams added presses to their defensive arsenals in the second half. After the teams combined for nine first-half turnovers the extra intensity resulted in a combined 20 after the break. VUHS turned steals by Duprey and Francis into hoops as part of a 12-4 run that Cogger capped with a three at 3:00 and pushed the lead to 42-30.

The Eagles then closed the gap. Funke scored in the lane, and senior Brenden Oxford beat the buzzer with a three to cut the lead to 42-35.

Funke opened the fourth with a jumper, and it was 42-37. Then both teams went cold. Francis went coast to coast for a layup to make it 44-37 two minutes in, and neither team score again until 3:30, when Francis stole the ball and turned it into another layup. 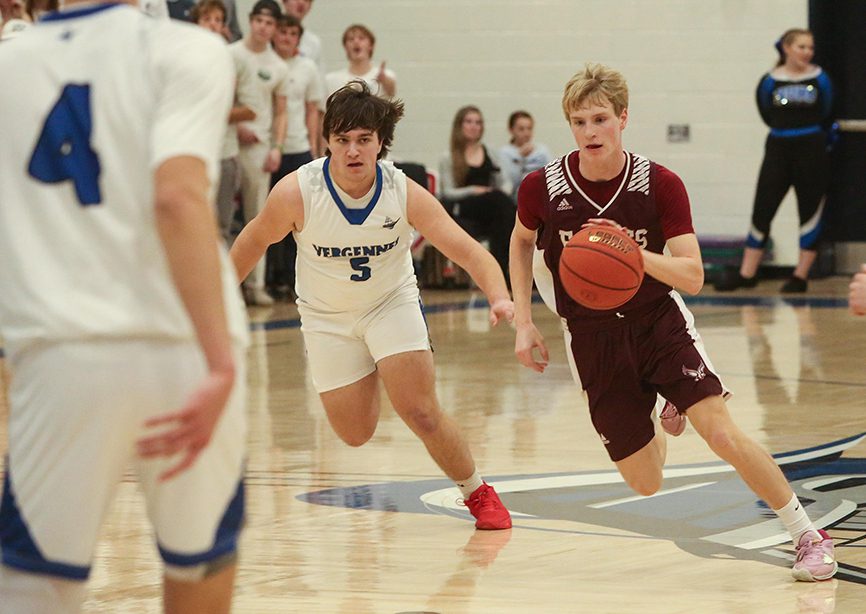 EAGLE GUARD CHANCE Denecker brings the ball over halfcourt at the VUHS gym on this past Friday under the watchful eye of Commodore guard Xavier DeBlois.
Photo by Buzz Kuhns

But the nine-point lead proved not to be safe. Eagle senior Gavin Bannister scored in the lane, Funke hit a three at 2:35, and two Lutz free throws at 1:47 made it 46-44. After a Funke steal, Bannister had a chance at the line at 1:21, but missed the front end of a one-and-one, and Commodore junior Oakley Francis rebounded.

The Eagles chose not to foul, and finally trapped a VUHS guard in a double team to force a jump ball. At 0:28, the possession arrow pointed their way. They worked the ball around and senior guard Chance Denecker got a good look from the left side of the arc, but his shot hit the front rim. Francis had position, snatched the ball and fed Duprey.

The Eagles fouled Duprey with 4.1 seconds to go. He missed his one-and-one free throw, but darted in to nab the rebound, was fouled again, and iced the game with two free throws.

Funke led the Eagles with 14 points. Lutz (seven), Oxford (six) and DeNapoli, Denecker and Benoit (five apiece) all contributed points for the Eagles. 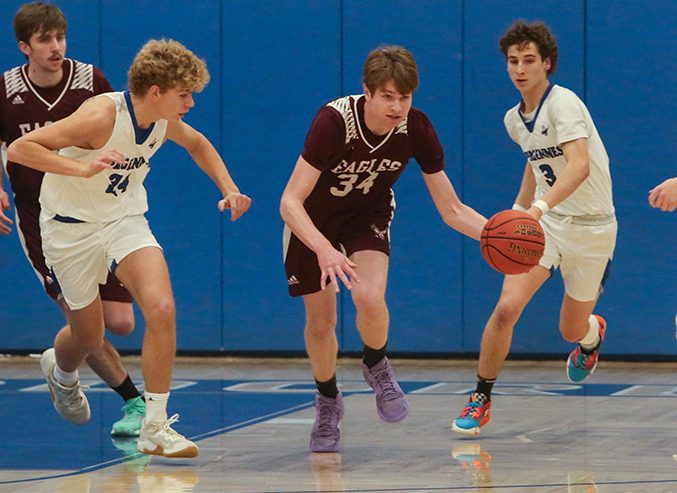 EAGLE FORWARD IAN Funke heads up the court in the VUHS gym this past Friday with Commodores Oakley Francis, left, and Elijah Duprey in pursuit.
Photo by Buzz Kuhns

Clark expects his team to iron out the offensive wrinkles, and said they have already improved on the other end.

After Abram Francis, Duprey (nine), Cogger (six) and Brisson (five) had the most points for the Commodores.

Carter was also pleased with his team’s defensive effort.

“Our man-to-man was a lot more disciplined than it has been,” he said. 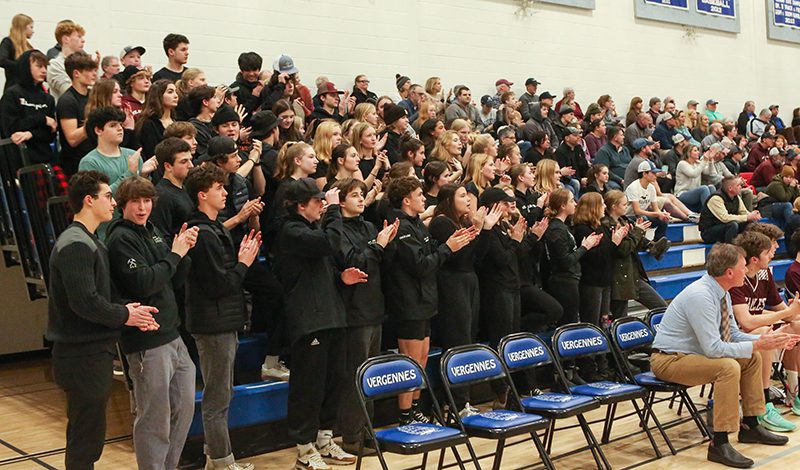 MOUNT ABE STUDENTS decked out in black stood behind the Eagle boys’ bench and cheered their friends on for the whole game this past Friday at VUHS. The Commodore coach praised both student sections for their energy and spirit.
Photo by Buzz Kuhns

“Both student sections were awesome. It was a great environment to be part of,” he said. “It was in the spirit of fun. There was no negativity with it, so I was really proud of both fan bases for having fun and bringing energy to the court. It just makes these games so special when they do that.” 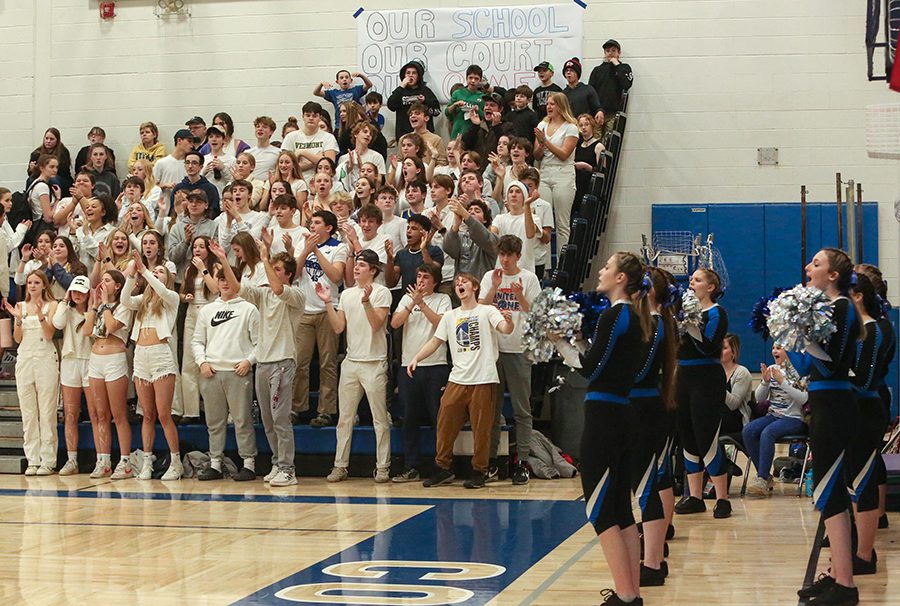 THE WHITE-CLAD VUHS student section and the Commodore cheerleaders contributed to the positive atmosphere in the packed Vergennes gymnasium this past Friday, when the VUHS boys’ hosted friendly rival Mount Abe in a close game.
Photo by Buzz Kuhns