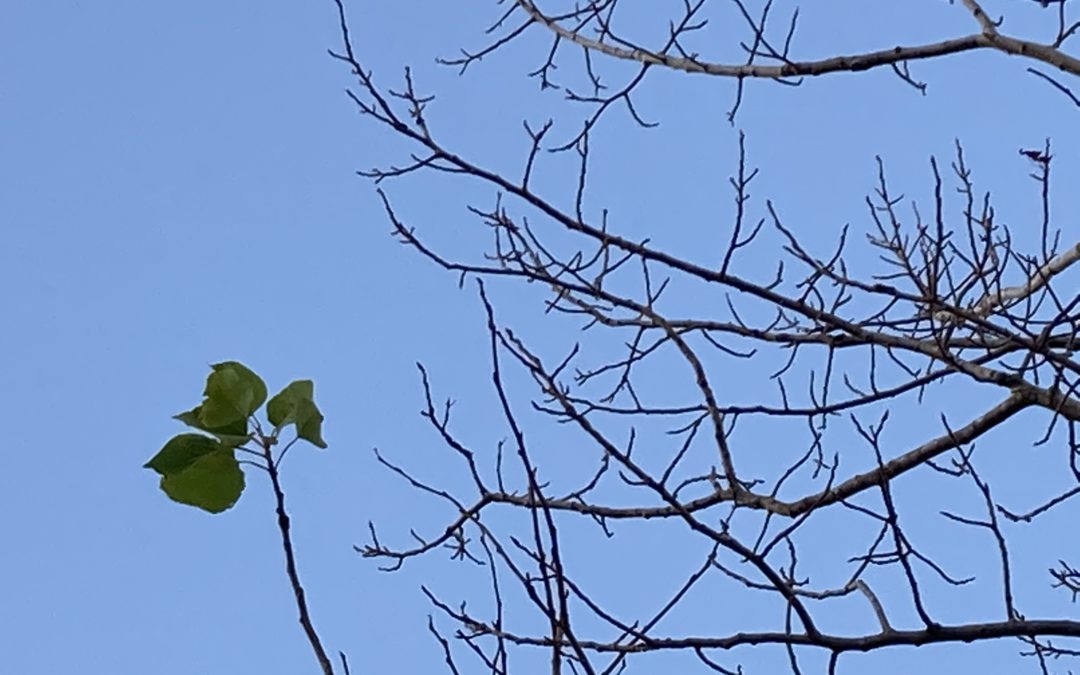 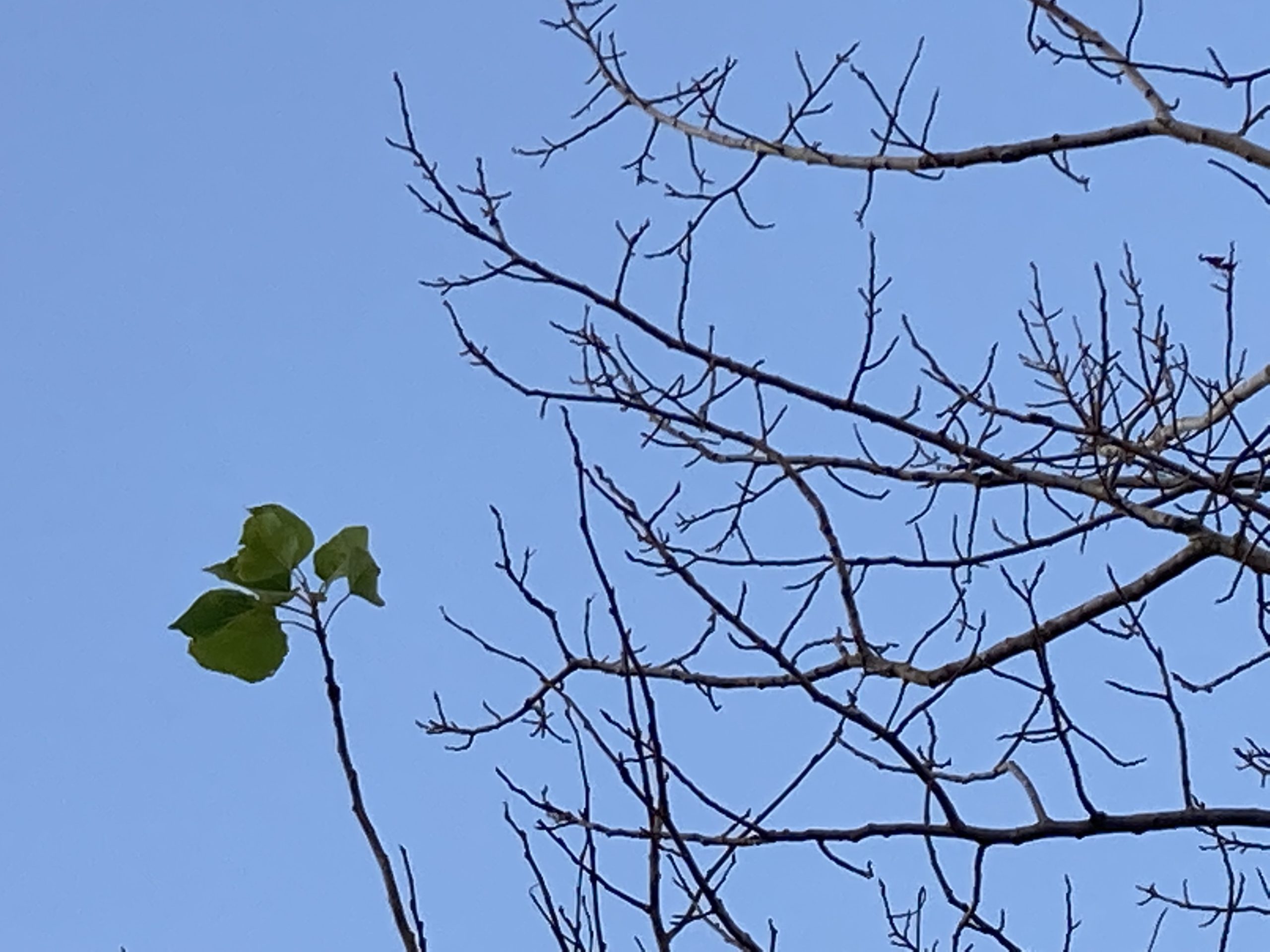 “I think that November might be the most beautiful month,” said my daughter as we drove through the barren brown landscape. A few scraggly leaves clung resolutely to the skeletal tree branches. November, memorialized by Thomas Hood’s bleak poem (a long list of “no’s,” concluding with, “No fruits, no flowers, no leaves, no birds! — November!”) is usually far down the list of months ranked by beauty. This daughter turns 15 in two weeks, so she has a vested interest in finding goodness in her birth month.

And yet, I could see what she meant. The sky gets bigger in November without leaves in the way. The light is spectacular: The sunrises and sunsets become kaleidoscopic shows of orange and purple and are more conveniently witnessed as the daylight contracts towards the middle of the day. And, sorry Thomas Hood, but there are birds — the hardy ones who hunker down for the winter — and they’re easier to appreciate in the absence of competition: the brilliant blue jays, sinister crows, stern red-tailed hawks, and swooping murmurations of starlings.

Here is what I have been thinking about lately: Middle age is a lot like November.

Now, my experience of middle age may not be universal, but in my experience middle age is when your heart breaks and stays broken. Heartbreak happens much earlier than middle age, of course — life is full of sadness and difficulty at every stage — but when I was younger it seemed that the stretches between heartbreak lasted longer. There was also the hope that life would be easier at some point. That was HARD, I’d think, but now it’s over and things will get better. And usually things would get better, for a time.

But since I’ve entered middle age, the heartbreaks seem to come fast and furious: challenges, illnesses, griefs in my own life and — often worse — in the lives of those I love. They come so quickly that they overlap, and I often have no time to breathe or regain my footing before the next wave hits.

This is HARD, I think when our youngest child is repeatedly hospitalized in respiratory distress, when the divisions in our country boil over, when a global pandemic drags on for years, when relationships are fraught, when my children struggle to become the best versions of themselves and have their own hearts broken, and when I receive steady news of the difficulties that my friends and family are going through.

Sometime over the past year, I stopped assuming things would get better.

The reality is that by middle age, life begins to press in on us all in a multitude of ways. I know more people who’ve faced death or died, more people whose marriages have ended, more people who question whether they lived for the right things. Nor does parenting get easier as children get older; on the contrary, it’s far more brutal than late-night feedings to watch this hard world have its way with your children. And don’t even get me started on the news. If you could see into my chest cavity, I think my heart would look like one of those sacred heart icons: broken, bleeding, crowned with thorns, pierced by daggers. I bet most middle-aged hearts would look this way.

Before you begin to worry: I am not living in a state of despair. On the contrary, I found it immensely hopeful the day I realized, Maybe life really just moves from heartbreak to heartbreak; maybe the key to getting up in the morning doesn’t lie in hoping it’ll get better, but in figuring out how to live well even if it doesn’t.

It’s a little like existing in a permanent November. But as my daughter pointed out, sometimes the bleakest landscapes can be the most beautiful, if you have eyes to see.

I see it in my three-year-old son, who takes so much delight in life that multiple times each day he has what we call a “joy spasm:” hands clasped together, eyes closed, enormous grin, and his entire body doing a shimmy-shake. He joy spasms over his morning cup of cocoa, preparing to take “a little walk,” reading a favorite book, or when he sees someone he loves. He gives hugs without reservation. And he rejoices in the successes of others. In recent months, he’s become obsessed with basketball (mysteriously — there is nary a basketball player among our short-statured family), but his idea of “playing basketball” at the playground is to toss the ball a few inches into the air, smile, and say, “I can’t get it in. Mommy, do it!” Similarly, he loves the little video games on his toy camera — but what he loves most of all is to watch his sisters play while he watches, shouting, “Are you winning? Keep trying! You’ll get better!”

I see it in my older children, who are beginning to grapple with what theologian Kara Powell considers the biggest questions: Who am I? Whose am I? Why am I here?  They approach these giants bravely, armed with their astounding creativity, grasping for hope and meaning through art, writing, and music.

I see it in my husband, who helps hold my broken heart. He gets up every morning while it’s still dark to pray and journal, then emerges into the day to encourage the rest of his family — mostly introverts inclined to despair — to love more.

I see it in the people around me, all of them living with bleeding hearts in their chests. There are people in my life who have experienced such pain that I don’t know how they are able to carry on, but somehow they scrape together enough hope to get out of bed each morning — and they give me hope.

And I see it in November. Yesterday, my husband and I were walking the dog along our driveway when my husband stopped, pointed up, and said, “Look at that! How’s that possible?”

He’d spotted a little cluster of bright green leaves on the topmost branch of an otherwise bare tree.

“I don’t know how that’s possible,” I said, “but it’s perfect. I’m putting that in my column, because it’s exactly what I’m writing about.”