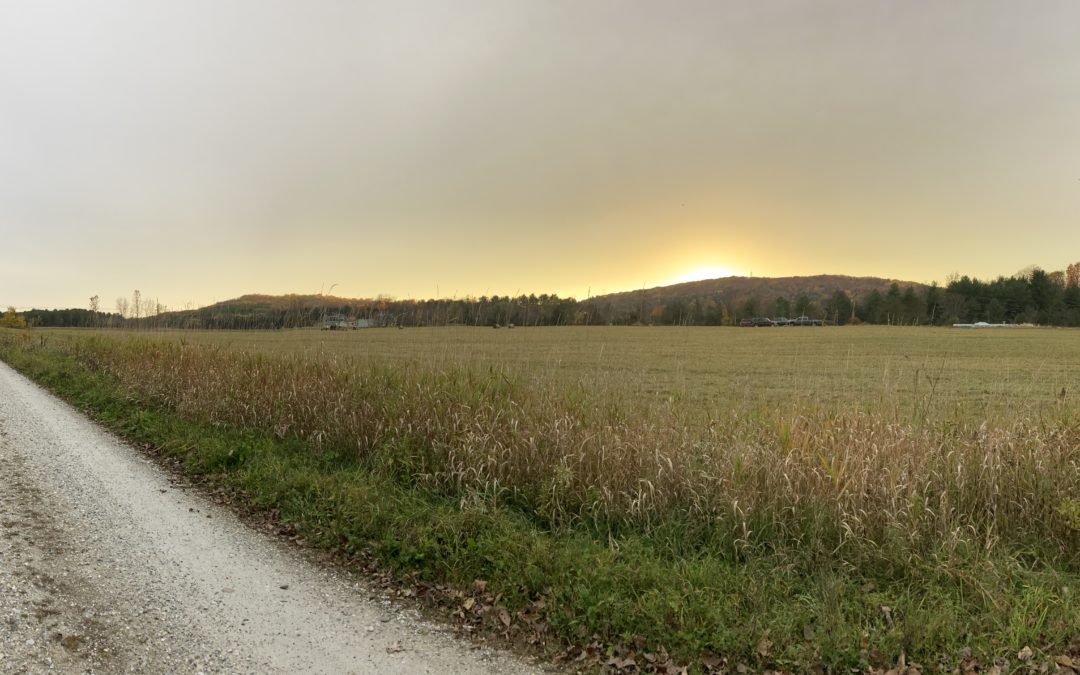 The fall sports season is over. As always, it was brief but intense, with afternoons that felt like tactical maneuvers as my husband and I shuttled four children who were playing two sports (soccer and field hockey) on three teams. Gone are the hours spent huddled in a folding chair amidst the growing cold and dark, trying to divide my attention equally between the players on the field, the parents and grandparents on the sidelines, and my two-year-old son who’d run off with some surrogate big siblings he’d picked up. (Our family’s scoreboard for the season boasts not a single victory, but three tied games feel close enough.)

The garden was leveled by an early hard frost just as the zinnias and cosmos were at their peak. Now, when the golden autumn sun shines, I go outside and chop down the dead brown stems and lug them by wheelbarrow out to the compost pile like a botanical undertaker. There is still some hardy kale left in the garden, but I keep forgetting to cut it in time for dinner.

The foliage has been glorious, as usual: avenues of maple that glow red-orange, birch and poplar that spill yellow light like tree-sized buttercups. But yesterday I drove five children to and from the Vermont History Museum in Montpelier, and although the lovely drive took us across three mountain passes still decked in autumnal beauty, a 12-year-old in the car kept repeating, “This would’ve been a lot prettier last week.”

The sunrises and sunsets have been gorgeous symphonies in purple and orange: I know this because as the days grow shorter, my twice-daily dog walks often coincide with the rising and setting sun. Sometimes there is mist haunting the fields in the mornings, or the graceful cacophony of migrating geese overhead in the afternoons.

We have done our best to check off all the boxes: we visited the apple orchard and the corn maze, we bought mums and the pumpkins for our front porch, we decked the house in gourds and fake fall leaves, the Halloween costumes are ready to go. (Which reminds me that I still need to make pumpkin bread!) According to these metrics, our fall has been a success, but I am having trouble focusing. I feel distracted from the present moment, troubled by the vague sense that I’m always missing something. This morning, my 11-year-old daughter said, “I don’t know why, but I’m not really feeling excited about anything right now,” and I thought to myself: Me, too.

Some members of our family suffer from mild seasonal depression; this year my husband and one of our daughters will be staring into light boxes to see if they stave off the doldrums of cold, dark days. But I’ve never had an issue with turning away from the sun: I welcome the coziness, the dark, the snow, the excuse to stay inside with my books and my people.

So how to explain my malaise?

To my wistful daughter who wasn’t feeling excited about anything, I said, “Well, you’re growing up. You’re at the age when you’ve experienced things like Halloween so many times that they’re not quite as exciting as when you were younger.”

And I think that explains it.

You see, this isn’t the first child of mine who’s come to me lamenting a lack of excitement in things once highly anticipated; her two older siblings made the same comment, at almost the same age. So when I heard the stirrings of pre-pubescent angst for the third time, I had the disconcerting sense of weariness at having been through this before, combined with a feeling of panic at how little time I have left with all my children. My daughter’s comment reminded me of all the autumns behind us — a blur of foliage and gourds and apples in which I can no longer remember what my children dressed up as for each Halloween (although they remember.) But it also reminded me of the ticking down of time: Assuming they move on after graduating from high school, I can count on less than one hand the number of autumns my two oldest children have left at home.

It’s a particularly autumnal posture, this looking behind and ahead simultaneously: Autumn is, after all, a season of transition, when even nature itself bids farewell to summer and prepares for the coming winter. But trying to look in two directions at once can prevent one from being both fully engaged in the present moment, and from moving forward. Hence my distraction, my malaise.

A solution was suggested by one of my children. This weekend, I compelled my two oldest children and my husband to watch the 1989 film Dead Poets’ Society — a film that I’ve seen more times than I can count, and which meant a great deal to me during my own teenage years. It’s also an autumnal film; the action takes place largely during the fall and winter at a New England boys’ prep school, and there are plenty of panoramic views of foliage, the stubble of corn fields, and migrating birds.

Dead Poets’ Society stars Robin Williams as Mr. Keating, a poetry teacher who arrives at fictional Welton Academy in 1959 and uses unconventional teaching methods to urge his conventional students to seize the day and “suck the marrow out of life.” Much inspiration — and some tragedy — ensues; it was, in fact, darker and more disturbing to watch as a parent than it had been as a teenager. My own teenagers were deeply moved.

In response to the film, after much thought, my 13-year-old who said, “We like to think that we have endless chances to try again at life, when really we have just this one life.”

That comment has been chipping away at my autumnal malaise ever since. I’ve lived through dozens of autumns and parented multiple teenagers — but never this particular autumn, never this particular teenager at this particular moment. Regardless of how much has happened in the past or how little time I have left in the future, right now is the largest space in the universe. Rather than stand paralyzed and distracted, or mindlessly checking off boxes, I’d do well to remember that I just have this one life, and to press down into it.