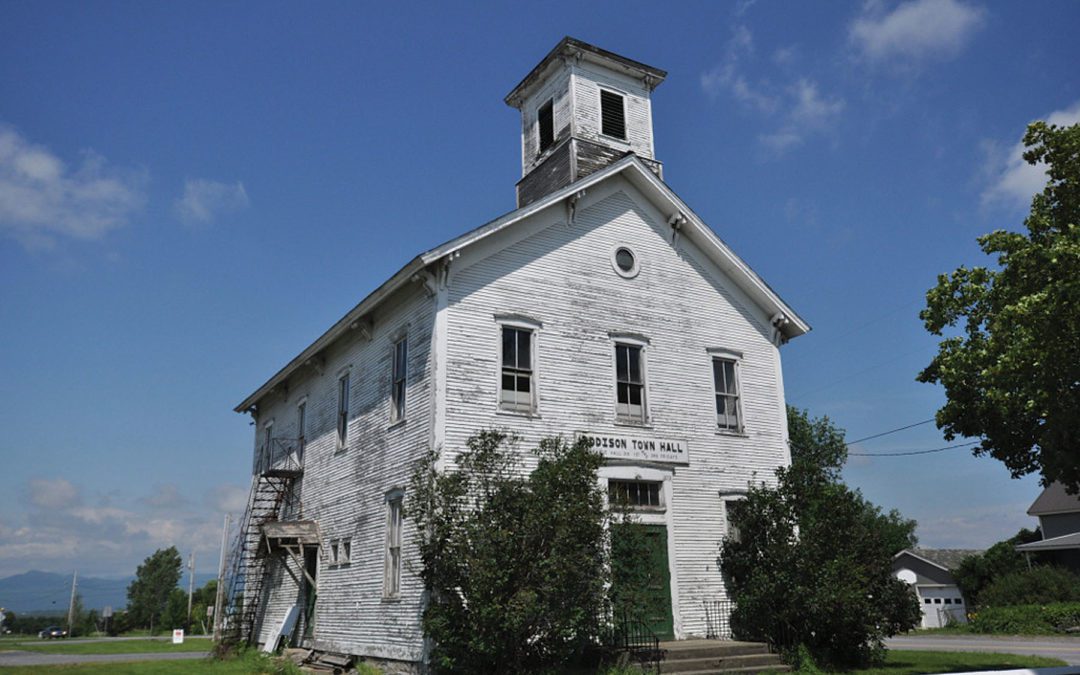 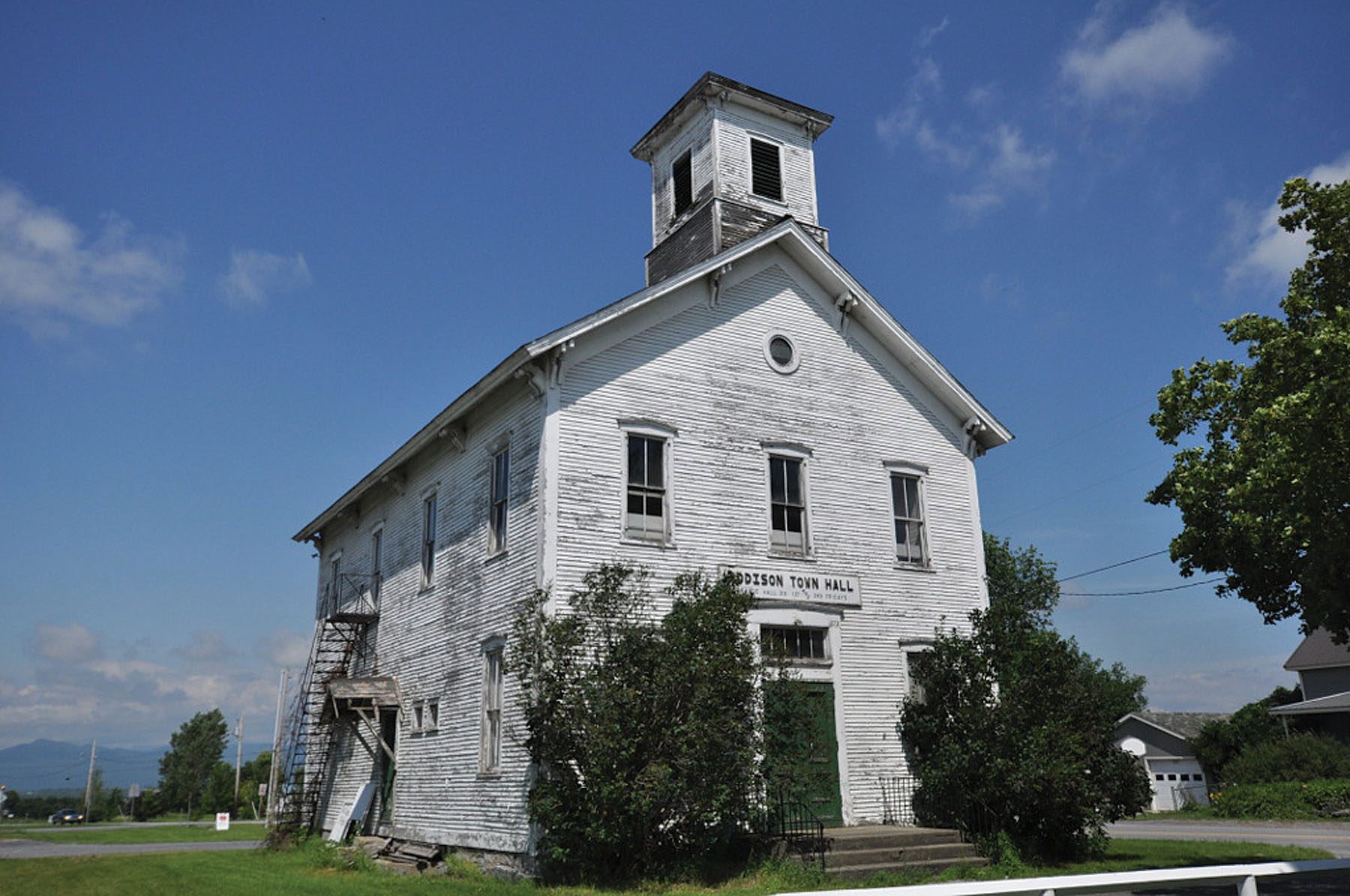 THE ADDISON TOWN Hall will open its doors to the public this Saturday, 10 a.m.-2 p.m. for an open house. Later this fall, residents will vote on a bond that would restore the historic building.
By Andy Kirkaldy

ADDISON — On Nov. 8, Addison residents will face a $2.07 million question — should they approve a bond for up to that amount to renovate the town’s historic former town hall on Route 22A into a new town office building and community center.

Addison Town Hall Committee Chair John Spencer said if residents back the bond the final cost to taxpayers could be lower. As an example he pointed to Vergennes, which earned major awards this past spring for its sewer system overhaul after residents supported a bond on Town Meeting Day.

“We also anticipate getting some more grants. That’s the most important message. A lot of grant funders won’t consider you unless you already have money set aside,” Spencer said. “So we need to get the bond issue passed before we get the grants … We’re going to be diligent working on those.”

Residents of the town are invited to an Open House at the Addison Town Hall this Saturday, Oct. 15, from 10 a.m. to 2 p.m.  Come say hello to neighbors, enjoy music and refreshments, tour the building and find out more about the upcoming bond vote to restore the historic Addison Town Hall.

The more-than-150-year-old former town hall sits just a couple of hundred yards from Addison’s current tiny town clerk’s office. The building requires a complete interior rehabilitation and foundation work, but retains a sturdy shell, according to Spencer and handouts from the committee. If the bond is approved, work would probably begin next summer.

The building essentially lacks everything except the in-ground septic system that residents have already supported and that has been installed to the west of town-owned land at the junction of Routes 17 and 22A.

That septic system also serves the Addison Fire Department and the church next to the old town hall. Voters approved it in part to serve the church in exchange for ownership of the building, which had rested with the church.

According to the Town Hall Committee, if the former town hall were renovated it could offer much that the cramped current town office building cannot.

Plans call for three levels and 7,000 square feet of space to provide room for town boards to meet and host hearings, accessible rest rooms, a vault big enough to store all Addison’s vital town records, adequate offices and storage for its clerk/treasurer and assistant clerk/treasurer and listers, and two community meeting rooms, the larger one to fill the top floor and include a stage.

Spencer, who has been working on the town hall project for more than a decade, acknowledged there is no way to be fully confident about a project’s estimated price tag, especially in the current climate.

“I’d say we are as confident as we can be,” he said, adding the project architect worked on the plans this summer and “put some margin in there.”

The bond is not the only funding for the project. Addison has already won a $75,000 grant from the Bruhn Foundation, and the selectboard has earmarked $300,000 in American Rescue Plan Act (ARPA) funds toward the project.

The bond vote on Nov. 8 assumes no more grant funding will be obtained. The Town Hall Committee published tax impact estimates using a 30-year bond for $2.1 million with 4% interest, which would require an initial annual payment of $155,890 that would drop as loan principal was repaid.

Spencer was asked if the project goes forward, for how long would it meet the town’s needs.

Spencer was also asked if voters should take into consideration the likely return of the Addison Central School to the town.

He said that not only was the school building not well suited and too large for town offices at 18,000 square feet, but it also potentially had greater value as the home for another use — a school, business, medical facility, childcare and/or senior center, for example — that could bring jobs and tax revenue into Addison.

Spencer also noted the building was insured for $3.8 million, not a guarantee that it could be sold at that value if the town chose, but an amount that indicated possible future sales revenue for Addison as well as property tax income.

Basically, Spencer said, with other possible beneficial and profitable uses for the school, he believes it doesn’t make sense to delay the town hall project any longer.

“I’m sure the town is going to want it back,” Spencer said. “But nothing has been discussed or studied ever. So to wait on the town hall while we discuss the town school, it (the town hall rehabilitation cost) has already gone up $1 million in 10 years. And in another five years it will probably go up another $1 million. So time is of the essence.”

He also noted the top floor of a renovated town hall would offer significant value to Addison as a focal point for not only official events, but also concerts, dances, wedding receptions and other private events that would add to the fabric of the community.

And then, according to a Town Hall Committee handout, there is what Spencer called the “the embarrassment of the current town clerk’s office.”

“The current town clerk’s office is inadequate for the work that goes on there. A design study during the Town Hall planning process determined square footage necessary for town functions far exceeds what is available.

“It is difficult to access records, books are stacked nearly to the ceiling, voting is cramped, and the building does not provide a needed safety exit. The bathroom lacks sufficient privacy, is not ADA accessible, and the building itself is in poor condition with multiple needs for repair.”

A presentation on the project will be made at the town information meeting on Nov. 4 at 7 pm at the Addison Fire Department.