RIPTON — Ripton residents on Thursday, Sept. 29, will be asked whether they’d like to end their two-year effort to separate from the Addison Central School District, a move townspeople endorsed as a way of preserving their small elementary school.

Vote “yes,” and the community affirms a decades-old relationship as one of seven Middlebury-area communities served by the ACSD. That relationship was due to officially end on July 1 of next year, when Ripton was slated to snip all remaining ties to a district that now serves the towns of Bridport, Cornwall, Middlebury, Ripton, Salisbury, Shoreham and Weybridge.

Staying with the ACSD would ensure continuity of education (the district has an International Baccalaureate curriculum), but also means the long-term future of Ripton Elementary might not be decided not by local residents, but instead by the ACSD board — unless the district’s charter is changed.

A majority “no” vote on Sept. 29 means Ripton continues its independence drive, albeit down a road strewn with potential obstacles. The Vermont State Board of Education (SBE) has designated Ripton its own supervisory district, meaning the community of fewer than 90 school-age children would be responsible for providing the same kind of diverse services — including special education, transportation and central office functions — that are provided by districts serving many hundreds of students. The SBE has declined to assign Ripton to a supervisory union, or SU, that could provide those services. No SU has stepped forward to welcome Ripton into its fold.

Ripton School Board members have worked hundreds of hours trying to lay the foundation of an independent preK-12 public school system that will meet federal, state and local public education standards. Ripton school and municipal officials, flanked by attorneys and consultants, have met several times with the SBE to make their case, which includes forming a Mountain Supervisory Union with the neighboring town of Lincoln, which has voted to exit the Mount Abraham Unified School District.

But the SBE last month voted unanimously to issue an opinion that “there is an overwhelming risk” Ripton won’t be able to assume full responsibility for educating its students beginning next July — either as a supervisory district or as a supervisory union.

The Ripton School Board has provided residents with a basic flow chart showing the potential implications of majority “yes” and “no” votes on Sept. 29. 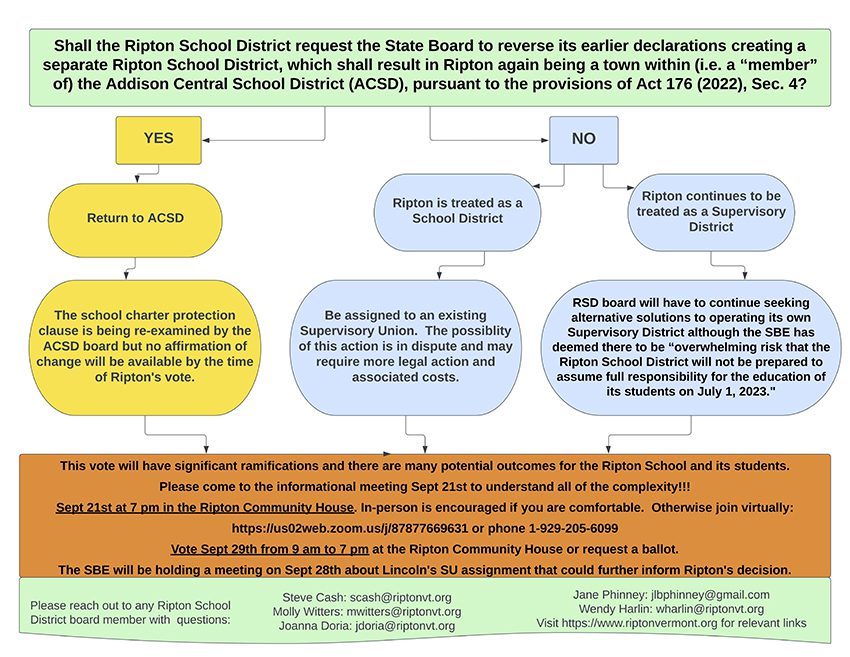 A “yes” vote, according to the board, means Ripton stays in the ACSD and can try to negotiate a change in the district charter that would give each member town the final say over whether its local school is closed due to such reasons as declining enrollment and/or finances. The current district charter allows the ACSD board to close a school through a super majority vote, meaning at least 10 of its 13 members voting in favor.

The ACSD panel has in recent years declined to embrace a change on school-closure rules, but that could be changing. The board has formed an ad hoc committee to examine at how other school districts have designed school-closure protocols in their respective charters. The committee will present its findings during the coming weeks in hopes of informing an ACSD charter change that would satisfy both Ripton and the ACSD.

It’s clear a potential charter change won’t crystalize before Ripton voters go to the polls next Thursday. Ripton’s decision earlier this year to pick July 1, 2023, as the go-live date for its independence — rather than wait an additional year — means the town’s repatriation referendum must take place before the end of this month if it’s to take advantage of a new state law creating an easier transition (if Ripton opts to rejoin the fold).

The ACSD’s ad hoc committee is expected to provide an update on its work at the ACSD board’s Sept. 26 meeting, according to board Chair Victoria Jette.

“I understand the urgency that some Ripton voters feel due to their vote on Sept. 29, but I believe that we must allow time for the ad hoc committee to complete its work and for the board to fully consider the range of options,” Jette said through an email to the Independent.

“Ripton voters will have to decide if they truly want to be a part of the ACSD educational community or not, independent of a final decision regarding a change to ACSD’s charter.”

A “no” vote on Sept. 29, according to the Ripton school board’s flow chart, could yield two scenarios.

The first would see an independent Ripton convince the state to assign it to a supervisory union that would provide all the ancillary transportation, special ed and central office services it would be hard-pressed to offer on its own. At this point, no SU has offered to take Ripton in, and the state board has stated it won’t force an SU to do so.

The second scenario: Ripton can’t find a supervisory union with which to partner and thus continues to search for ways to go it alone, running the risk of not having a state-approved education plan by next July.

Ripton School Board member Molly Witters offered some of her views on the historic fork in the road that she and her fellow townspeople are facing at the ballot box.

“I do think a tremendous amount is at stake with this vote, and there is not a single outcome available at this time that I feel best represents the overall desire of our community to feel safe and seen for where we are in this process and what we value most,” she said.

Witters lamented the fact that Ripton’s fate hinges on a series of closely grouped decisions, all coming within the next few weeks.

In addition to the Ripton referendum on Sept. 29 and a possible ACSD charter change, the State Board of Education on Wednesday, Sept. 28, is slated to discuss Lincoln’s independence effort — specifically its desire to be assigned to an SU. That SBE meeting will be held at Mount Abraham Union High School in Bristol. The meeting agenda was still being crafted as the Independent went to press.

Some Ripton officials believe an SU breakthrough for Lincoln could help Ripton’s chances.

“Yes, we will be reviewing SU options for Lincoln,” SBE Chair Oliver Olsen said through an email exchange. “The Lincoln School District has suggested potential assignments with a number of SUs across the state, including one in Windham County. We have been receiving a lot of feedback from these SUs over the past few weeks, so we are planning a large chunk of time to review and discuss the comments we have received from Lincoln and the SUs.”

The Independent asked Olsen if any of the potential SU pairings for Lincoln were showing promise. His reply:

“No SU has expressed a willingness to take on Ripton or Lincoln as a member district. We have received very strong objections from SUs, and at least one SU has indicated that they will be at the (Sept. 28) meeting with legal counsel.”

Ripton was slated to hold a special meeting on Wednesday evening, Sept. 21, to discuss the upcoming reunification vote and to correct a procedural mistake in school-related budgeting that occurred at the annual town meeting in March. The meeting was held after the deadline for this edition.

“Reach out to us as board members, pay attention to the messaging from the state level and the outcome of Lincoln’s SU assignment,” Witters exhorted her fellow Riptonites.

An eleventh-hour life preserver would also be welcomed, she noted.

“If anyone in a position of power indicated that they would help us achieve our goal of self-determination for our community, we would be thrilled,” she said. “We would love nothing more than to pour our energy back into creating a sustainable path for all of the schools in ASCD if we could receive affirmation that this energy would be accepted and that it would be supported at a state level.”

The Independent hadn’t received any letters to the editor about the impending Ripton vote as of the deadline for this edition. There’s also been little chatter about the vote on social media, though Ripton School Principal Tracey Harrington weighed in on the topic in Tuesday’s edition of Front Porch Forum. Harrington — who also lives in Ripton — opposed her town’s withdrawal from the ACSD two years ago and is now urging her neighbors to vote “yes” on rejoining the district.

Recent changes in ACSD board membership and a growing support for rural schools at the state level should give Riptonites cause for optimism, according to Harrington. She praised those who’ve been working hard to find ways for Ripton to function as an independent school system, but added, “At the same time… we are also seeing significant inflation and increased costs, staffing shortages in schools and businesses, and an overall heightened sense that our schools are not meeting the diverse needs of our students. It is for these reasons that I believe we should vote Yes on the 29th, to return to ACSD.”

Ripton’s Sept. 29 Australian ballot vote will be held from 9 a.m. to 7 p.m. at the Ripton Community House, or residents can request a ballot from the town clerk.