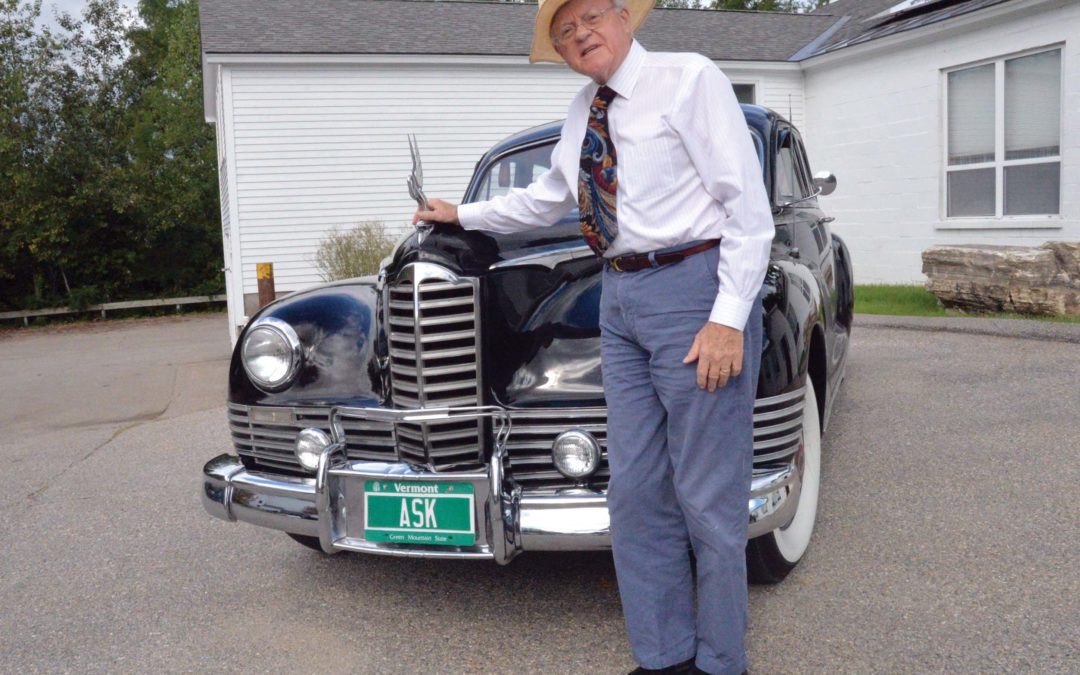 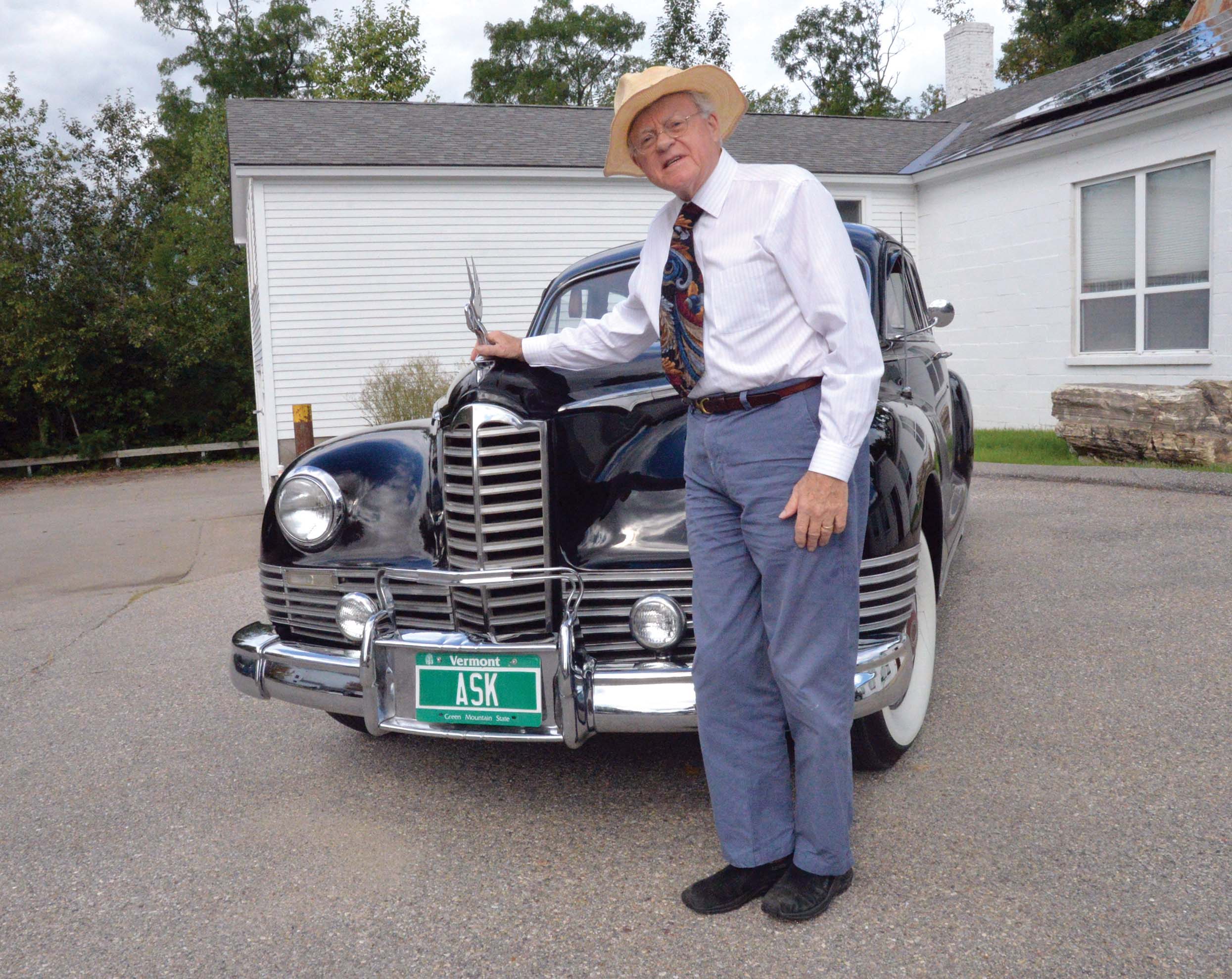 MIDDLEBURY REPUBLICAN PETER Caldwell, shown with his 1947 Packard campaign car, is hoping to win one of the two Addison-1 seats representing Middlebury in the Vermont House of Representatives. Independent photo/John S. McCright
By John Flowers

MIDDLEBURY — Candidates for office usually spend a lot of time chasing down citizens for brief exchanges that will hopefully translate into votes on Election Day.

Middlebury Republican Peter Caldwell is hoping voters will do the chasing, and he’s got an impressive conversation starter: A beautiful 1947 Packard. The word “ASK” is featured on the license plate, and Caldwell is adept at steering the conversation from vintage cars to getting under the hood of state government for some major repairs.

Caldwell, 79, waged a successful write-in campaign on Aug. 9 to have his name placed on the Nov. 8 General Election ballot for one of the two seats representing the Addison-1 district in the Vermont House. The Addison-1 district encompasses Middlebury, except for a northwest section largely consisting of the Marble Works complex and the Seymour Street neighborhood.

He is trying to unseat one of the two Democrat incumbents — Reps. Robin Scheu and Amy Sheldon.

Peter Caldwell and his spouse Janet — a former counselor at the Counseling Service of Addison County — moved from Snake Mountain in Bridport to Middlebury around six years ago. Peter said the move was predicated on his wife’s health.

“We thought we should be closer to a hospital,” he explained.

The couple has lived in Vermont since 1998. Prior to that, the Caldwells lived in Massachusetts and New Hampshire.

Peter was raised in Wisconsin, where he was exposed to dairy farming.

Professionally, he describes himself as a “jack of all trades.” He’s been a college administrator, a professor, a small-business consultant, an accountant and an author. He had been planning to write a book about bluegrass music this summer, until a local Republican came knocking on his door.

“He said, ‘We don’t have any candidates running in Middlebury,’ and I said, ‘Why not?’” Caldwell recalled.

He acknowledged the Everest-like hill he’ll need to climb in order to win an Addison-1 House seat. Scheu and Sheldon are popular incumbents who have rarely faced Republican challengers. Scheu serves on the House Appropriations Committee, while Sheldon chairs the Natural Resources Fish & Wildlife Committee.

One has to go back two decades to find the last time Middlebury voters elected a Republican (Dean George) to represent them in the Vermont House.

“This doesn’t mean that if by some miracle I was elected I would abandon all conservative Republican principles,” Caldwell qualified.

Caldwell demonstrated his professorial predilections during an hourlong interview, quoting the likes of John F. Kennedy, John Dewey and Mao Zedong in illustrating his positions on issues ranging from education to public service.

He cited JFK’s oft quoted “Ask not what your country can do for you; ask what you can do for your country” passage from his 1961 inaugural as a big reason for his decision to run for a seat in the Vermont House.

“Quite frankly, if we did a 180 and the Republicans were in majority control of Vermont government — and had been for a number of years — I would be quite content to run as a Democrat,” he said. “I’m interested in being a voice for what is best for all Vermonters of good spirit who love their state, their country and are not way to one side or another.”

He called leadership “probably the scarcest human resource. It’s far more scarce than great artists or poets. It takes a gift, and I would argue a tenacity of purpose and moral rectitude.”

Caldwell believes he has the stuff of leadership and is willing to roll up his sleeves for the dirty work of politics, which he metaphorically compared to sorting through tons of cow manure to find a gold nugget.

While Caldwell has several issues on his legislative to-do list, two rise to the top: Controlling government taxation and public education reform.

“Taxation is wildly outrunning our ability to pay,” he said.

The solution, according to Caldwell: “First, reach agreement on how much we citizens are willing to spend on government, in all areas. Then, the legislative branch directs the executive branch to so budget. The form taxation takes may then get debated within the Legislature.”

On the issue of education, Caldwell said he and other Vermonters continue to wonder “Why we spend so much to get so little?” The answer to that question, Caldwell believes, is that the state’s education system is top-heavy with administrators.

“We taxpayers have become quite overwhelmed by bureaucrats and the cost to feed them,” he said, then quoted Lincoln: “Too many pigs for the teats.”

Caldwell believes the U.S. education system during the 19th century was “influenced by socialism” imported by American graduates of German universities. The result, according to Caldwell: “A one-size-fits-all, production-line education for the factory-worker-to-be proletariat, not for a free people.”

Instead, the country should embrace “a learning marketplace,” according to Caldwell, a system in which “every learning organization — whether public, private, cooperative, home-schooling, or therapeutic counseling — would receive state funding on a per-capita basis.” Bricks-and-mortar schools would get an extra allowance for facilities maintenance.

Each learning institution would be required to publish their students’ academic performance, which would in turn influence which institutions would flourish and which would fail, Caldwell said.

“Learning entrepreneurs competing for students will over time deliver the greatest learning for an agreed-upon total cost to taxpayers,” he said. “Vermont will go from costliest failure to frugal success in education.”

Middlebury-area schools are contending with declining enrollment and rising education costs, which is forcing the Addison Central School District board to look at cost-cutting measures. The concept of school closures and/or consolidations is not sitting well with many ACSD constituents. Caldwell suggested communities rent out vacant space as a way to make some of the smaller schools sustainable.

“This is all very entrepreneurial and very flexible,” Caldwell said. “It could be messy at times with a lot of angry people, but what matters in the end is that every Vermont child learns to the maximum of his or her capability.”

Caldwell acknowledged affordable health care continues to be an elusive goal for Vermont and the nation as a whole. He suggested the creation of health care cooperatives that would provide “all the health care needs to the people who join them.” Services would range from routine exams to treatment of major illnesses.

Like the public education system, Caldwell believes the health care industry has too many bureaucrats and too much paperwork.

Caldwell concluded the interview with a few thoughts on global warming and former President Donald Trump.

“My basic argument is this: Climate is cyclical, weather is chaotic. Evidence of severe weather events in no way says anything about climate change.”

“I personally believe he was a most remarkable president. He created an economy that was incredible,” said Caldwell, counting himself among those who believe the 2020 election was stolen. He believes Florida Gov. Ron DeSantis — not Trump — will be GOP’s 2024 nominee for president.

Caldwell will spend the next seven weeks making his pitch to voters. He holds court beginning at 7 a.m. each Tuesday morning at Rosie’s Restaurant on Route 7 South. He can be contacted at 2manypigsvt@gmail.com.