Passenger rail service is back! Trains roll through Vergennes, Middlebury after 69 years 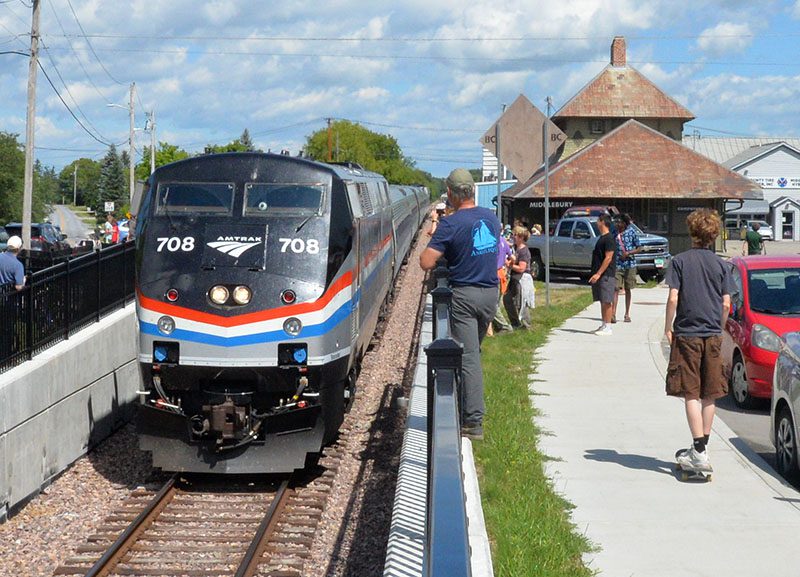 Passenger rail service is back! Trains roll through Vergennes, Middlebury after 69 years

Well-wishers and passengers lined both sides of the track in Middlebury on Friday morning to greet the first Ethan Allen Express passenger train as it stopped in town on its way to New York City. Independent photo/John S. McCright
By John S. McCright

ADDISON COUNTY — With a toot of its horn and cheers of local rail enthusiasts, the first Amtrak train rolled through Addison County this morning.

The Ethan Allen Express left Union Station in Burlington at around 10:30 bound for New York City. Around 11 a.m. it made it’s first stop — at the revamped train depot at the Park and Ride parking lot off Route 22A on the Ferrisburgh-Vergennes border. 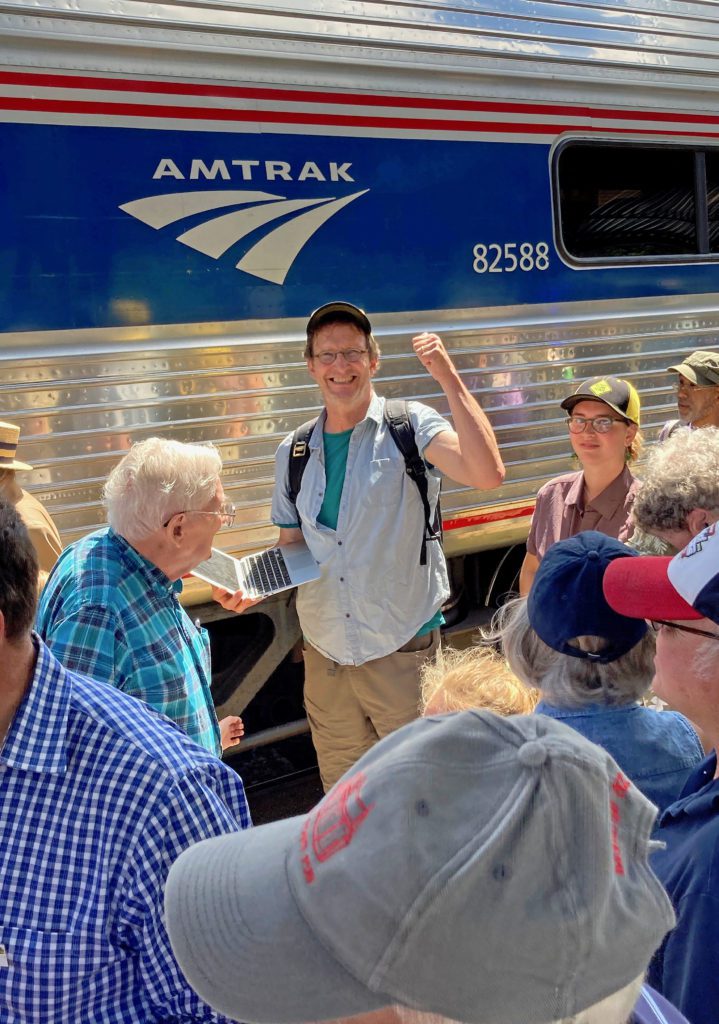 Middlebury resident Gregor Clark is psyched as he gets ready to board the first regularly scheduled passenger train from Middlebury in nearly seven decades.
Independent photo/Sarah Pope

A large crowd gathered at the train stop to welcome the return of passenger rail service to Addison County. The last passenger train to stop in these parts was in 1953.

The energy was high among the 200 people who waited at the train stop in Middlebury near the northern entrance to the Marble Works.

Meloney Lindberg of Shoreham boarded the train at the Middlebury stop with her daughter Aloki. They were on the first leg of a trip that would take them to New York City and eventually to Cambodia. Lindberg said that when going to New York City she and her family usually would drive to Ticonderoga and get on Amtrak’s southbound Montrealer passenger train. Today she was excited to be able to board the Ethan Allen train closer to home.

“The train is very affordable,” she said. “And it’s convenient to have the new station.”

Amtrak has long offered passenger rail service from Rutland to Albany, N.Y., and then on to New York City, but when the decision was made to extend service to Burlington a lot of the track and right of way had to be upgraded. Some $117 million — $88 million in federal money and $29 million in Vermont money — was spent on upgrades.

The biggest chunk of the work was done in Middlebury, where a $77 million, four-year project turned downtown upside down. 2017 saw two temporary rail bridges installed over the train tracks that stretched through downtown Middlebury. Construction of a rail tunnel culminated in a closure of much of downtown for 10 weeks in the summer of 2020. After that the station was set across the track from the old station that was active in the 1950s but now is in private ownership.

In Vergennes the old train depot was moved from its spot on North Main Street to a new home on the edge of the Agency of Transportation parking lot in nearby Ferrisburgh. 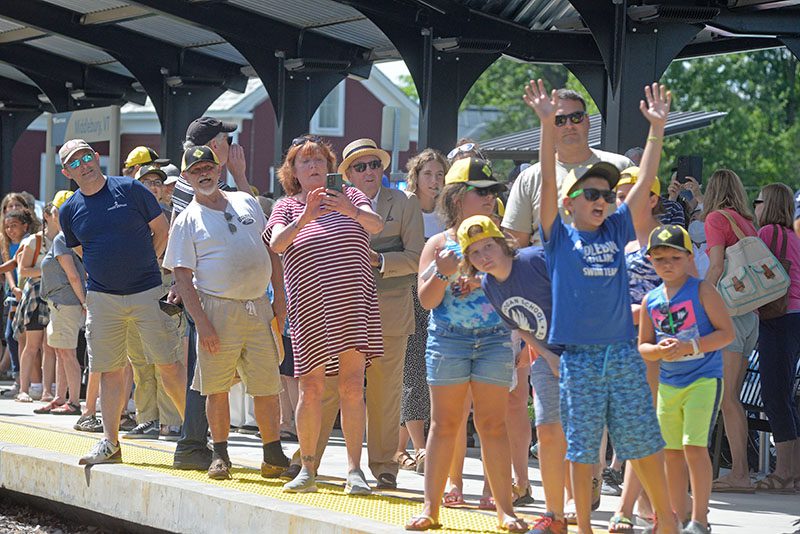 Around 200 people awaited the arrival of the Ethan Allen Express at the downtown Middlebury rail platform on Friday.
Independent photo/John S. McCright

On Friday, after the Ethan Allen Express pulled into the Middlebury stop, a handful of people boarded the train for points south. One couple was celebrating their 44th anniversary with a ride on the train. A trio from Middlebury had purchased tickets to take the train to Rutland just so they could be a part of history.

Another man told the Independent that he was more excited about the arrival of the Ethan Allen Express in Middlebury than he was about the first flight of the Concord supersonic jet in the 1970s.

The engineer, who introduced himself as simply Tim, greeted people out a window in the front of the train. He even handed out a few Amtrak lapel pins to excited youngsters.

Then he returned to his seat, revved up the engine and pulled the train out of the Middlebury train stop. 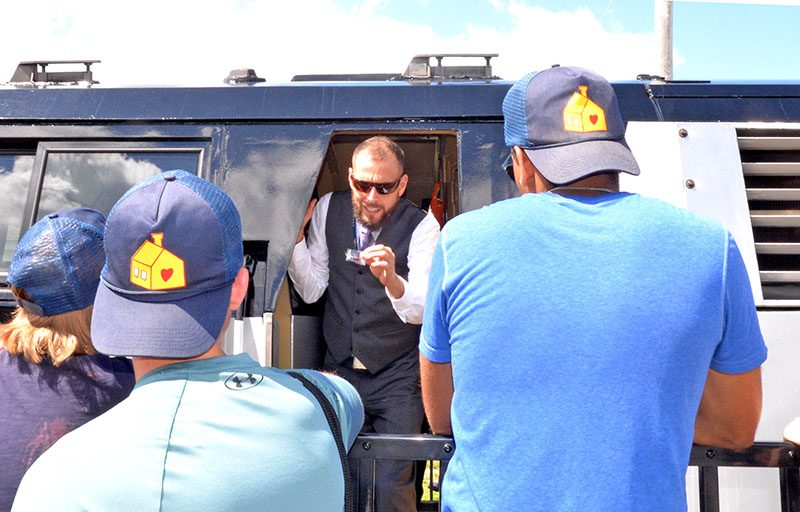 Tim the engineer on the Ethan Allen Express hands out a commemorative lapel pin to a youngster at the Middlebury train stop on Friday.
Independent photo/John S. McCright