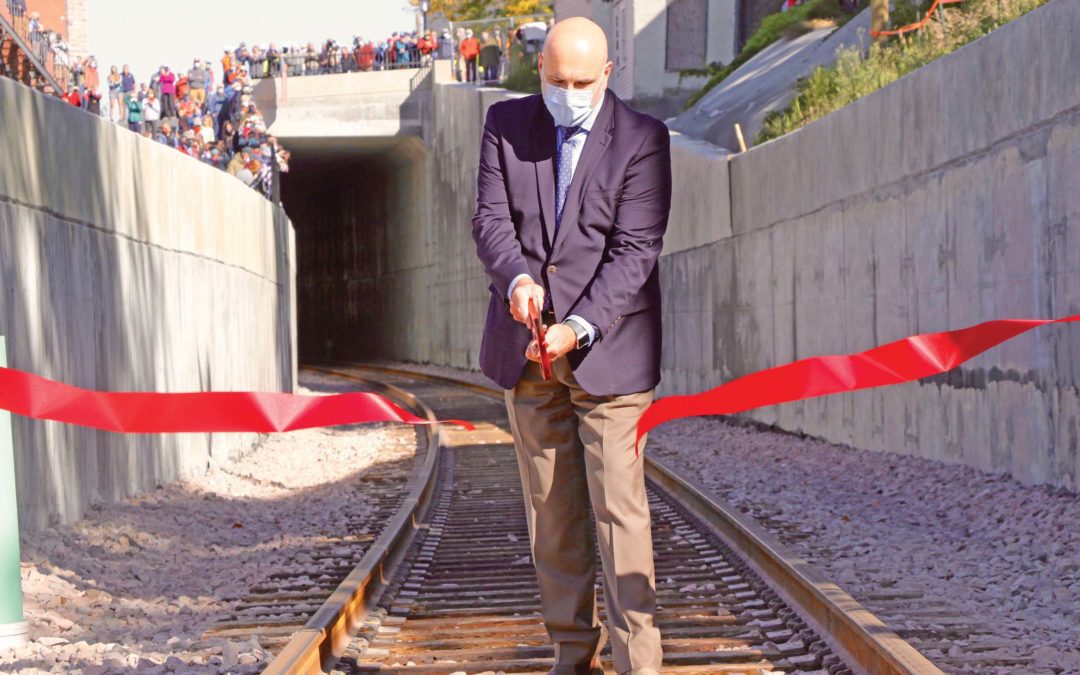 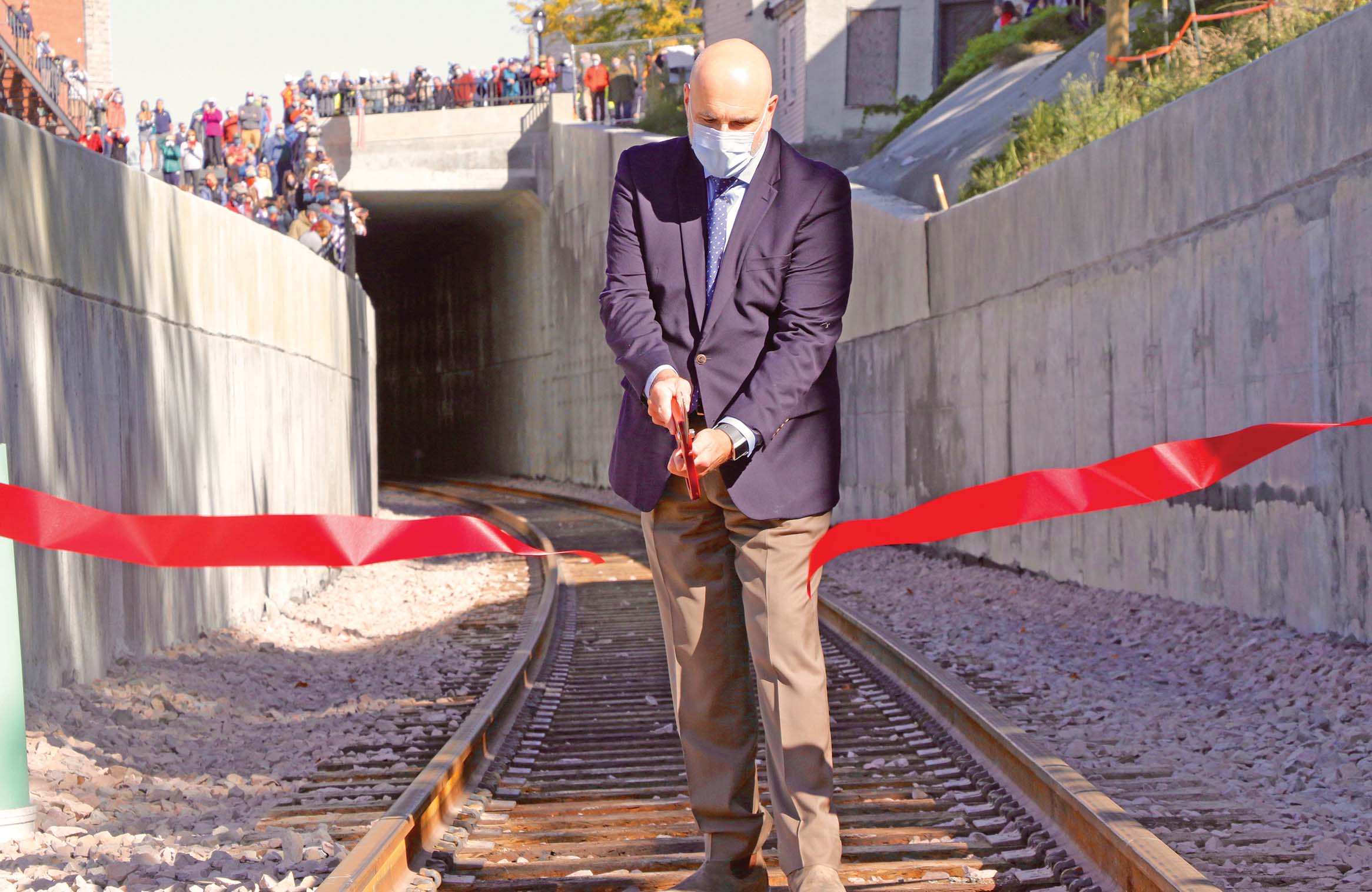 MIDDLEBURY — More than four years of planning, dozens of often contentious meetings, a 10-week burst of around-the-clock construction and $72 million in state and federal funding all came down to a seven-minute train ride on Friday, Sept. 18, that ceremoniously signaled the completion of a massive new rail tunnel and the reopening of downtown Middlebury.
Scores of facemask-wearing spectators lined the route of the “first train” with eight rail cars that hosted various municipal and Middlebury College dignitaries; representatives of Kubricky Corp., VHB Engineers and the Vermont Agency of Transportation (VTrans) who designed and assembled the 360-foot concrete tunnel; plus local media, including this reporter.
The ride covered just 3,900 feet and lasted seven short minutes on a crystal-clear day, but its symbolism was not lost on those who have followed — and/or played a direct role in — what was a two-decade debate about how to salvage or replace the deteriorating 1920s-era rail bridges on Main Street and Merchants Row. Father Time expedited the process in 2017, when the rail bridges got in such bad shape that they had to be closed and replaced with temporary spans.
Planners designed a tunnel to supplant the two bridges and, as a byproduct, enlarge nearby Triangle Park.
Kubricky spent the past two years undergrounding and relocating downtown utilities, constructing a temporary access road behind the Battell Block and installing a rail-bed drainage system, all as a prelude to assembly of the new tunnel during a 10-week shutdown of Main Street and Merchants Row that concluded this past Friday.
“What began as the need to replace two 100-year-old bridges in central downtown can now be seen for what it has become: An investment by the state of Vermont in Middlebury’s — one of Vermont’s great shire towns — future,” Middlebury selectboard Chairman Brian Carpenter told those who had gathered on Main Street to see it put back into circulation.
“Today begins a new and exciting chapter in the long life of our town.”

MAJOR IMPROVEMENTS
Middlebury’s downtown tunnel is but one in an impressive array of new characters that will play a role in the town’s future. During just the past decade, Middlebury has celebrated construction of a new Cross Street Bridge, a new municipal building, a new recreation facility, and now a new tunnel that can accommodate taller freight cars and passenger rail service.
Middlebury College President Laurie Patton, a passenger on the first train through the tunnel, is looking forward to Amtrak passenger rail service that will include a stop in Middlebury. State transportation officials are anticipating that service to begin late next year, or early in 2022. Middlebury is installing a passenger platform off Seymour Street, near the former train depot, in anticipation of ridership headed to and from New York City and beyond.
“I’m incredibly excited about this on so many levels,” Patton said of the tunnel project before boarding the train on Friday. “We’ve been thrilled with how efficient and timely the whole project was. We’re also really excited because eventually, with passenger rail, we’re going to be able to have a lot more movement and a lot more tourism, as well as parents coming in more easily. And that’s going to be great for folks who wouldn’t necessarily have the means to drive up; they’ll be able to jump on the train.”
Tourists visiting downtown Middlebury next summer will see several ancillary benefits of the tunnel project, including new sidewalks, new tree plantings, and new parkland. There will be a new “Lazarus Family Park” at the intersection of Main Street and Printer’s Alley, and the aforementioned enlarged Triangle Park that will include ample space for public gatherings.
Middlebury Selectman Farhad Khan said the new parkland and more spacious sidewalk on Merchants Row could allow for more creative promotions. For example, he’d like to explore the idea of closing Merchants Row on select days to allow for outdoor markets and dining, like Church Street in Burlington.
“To say I’m excited would be an understatement,” he said of the downtown’s new potential.
Khan gave kudos to downtown residents and merchants who have endured so much construction-related inconvenience during recent months.
“I admire the stakeholders who put up with the brunt of this construction, and I think the end result is going to be better than what we had even hoped for,” he said. “The downtown will be beautiful. Merchants Row will be marvelous by the time it’s done. I envision a revived downtown. The businesses will come back, for sure.”
Nancy Malcolm is a leader of the civic group, Neighbors Together, which worked on ways to minimize construction impacts on downtown stakeholders.
“I’m impressed with how the work was done, and I’m really impressed with the whole community,” she said. “I think the most positive takeaway is the support the community has given, and the courage a lot of our businesses had in adapting and hanging in there.”
One of those who hung in there was Nancie Dunn, owner of the Sweet Cecily shop at 42 Main St. She watched the Main Street reopening ceremonies from her shop door while greeting many familiar faces that passed by.
“It’s a happy day, and it looks amazing,” Dunn said of the work. “We can reinvent the town now, a little bit, and get some new businesses interested in coming into town. But it looks beautiful. I especially like the wide sidewalk on Merchants Row and the trees are just elegant.”
She enjoyed seeing the enthusiasm that downtown Middlebury is seeking to recapture after a brief hiatus.
“You can see from today how anxious people are to see the downtown and be in the downtown,” Dunn said.
“It was a long haul, but they did a beautiful job, so I’m thrilled,” she added. “Things are definitely looking up.”
Middlebury selectboard member Lindsey Fuentes-George counted herself among colleagues who believe the tunnel project has thus far delivered on its promises.
“We had really lofty goals, and I’m so impressed with how wonderful the downtown looks, even though everything is not in yet,” she said while taking her seat in the ceremonial first train. “Reclaiming that green space for the town is going to be so key, and I love the potential we have for passenger rail here. I’ve been very impressed, from start to finish.”

YEARS OF PLANNING
Among those who were part of the storied Middlebury rail bridges debate were Town Manager Kathleen Ramsay and former Town Planner Fred Dunnington. Both were on hand at Friday’s festivities.
“I still remember, in the early 2000s, walking under the bridges with then-Secretary of Transportation Dawn Terrill, trying to move the project forward,” Ramsay said. “It’s been a long time.”
But she believes the wait has been worth it. And Ramsay noted that while the town couldn’t secure direct aid to merchants affected by the construction, it was able to leverage around $200,000 from VTrans to promote downtown commerce during the heaviest work.
Now she’s looking forward to seeing how Middlebury can harness the greater potential of its improved downtown. The community is currently working on a downtown master plan.
“I think we have a lot of good ideas coming out of that (master plan) and will be in a good position to implement those ideas coming out of this project,” Ramsay said.
Dunnington, who retired in 2013, recalled how town officials and storeowners had feared a major construction project could be economically “ruinous” to the downtown. But he believes the community has weathered the storm and now has a lot to look forward to.
“It’s testament to the engineers and the contractors and the town for getting this far, and I’m sure the town is going to be happy to have things opened up,” he said. “We’re all rooting for the businesses to re-establish themselves and strengthen.”
Jim Gish is Middlebury’s community liaison to the rail bridges project. His role has included almost daily interaction with those responsible for the work, from the design table to the trenches.
“I’m trying to take it all in,” Gish said on Friday morning. “I’m excited for the community, for the crew that’s worked so hard to deliver this project, and I’m excited for myself. This has been a goal I’ve been working toward for four-and-a-half years now. We still have a road to go, but the hard part is over, and from now on it should be downhill to the finish line.”

MORE WORK TO GO
The finish line won’t be crossed until next summer. Here’s some additional work that will unfold during the coming weeks:
•  Workers will continue installing sidewalk, starting in front of St. Stephen’s Episcopal Church and then moving to the Town-Green side of Merchants Row, proceeding down from Court Square to Main Street.
•  Kubricky will begin installing historic ashlar blocks as benches in Triangle Park while readying the area for planting maples along the perimeter of the park.
•  Later this month and into early October, Printer’s Alley will be sidewalked and the roadway into Marble Works from Main Street will be completed.
•  The company ECI will perform stormwater drainage work at the north end of the project, requiring that Middle Seymour Street be temporarily reduced to a one-way traffic.
Middlebury Selectman Victor Nuovo, senior statesman of the board, can’t wait to see the finished product.
“When the parks are done, it’s going to be gorgeous down here,” he said, as he gently clasped the hand of his beloved wife, former Middlebury Selectwoman and state Rep. Betty Nuovo.
“It’s a beautiful town.”
John Flowers is at johnf@addisonindependent.com.
NOTE: This story has been updated since it was originally posted to take out the reference to the Middlebury Farmers Market. Officials with the market said they have no plans at this point to move from their long-term space at the VFW. We apologize for the error.