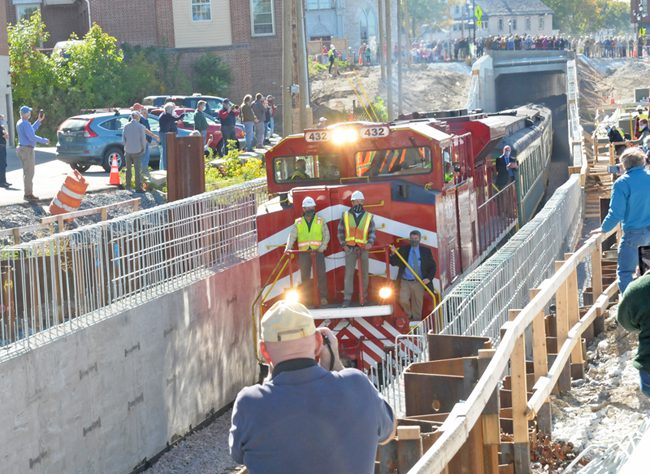 State officials said the Ethan Allen’s fare structure will allow a passenger to travel from Burlington to New York City starting at $75 — which, with gasoline prices currently hovering around $5 per gallon — is offering folks an affordable transportation option.

The Independent reached out to VTrans officials earlier this week for basic details on the Ethan Allen Express, in an effort to include that information in today’s print edition. The Independent was told no advance information could be provided and to tune into a June 17 Zoom meeting about the service to be co-hosted by the Addison County Chamber of Commerce.

But, today, Thursday, June 16, at 8:08 a.m., VTrans released details on the much anticipated service.

Today’s press release included no details on the arrival/departure times and fare specifics for the Ethan Allen’s Middlebury and Vergennes stops.

Middlebury’s new passenger rail platform hugs the tracks between Seymour Street and the Marble Works complex. It includes a 300-foot deck with a canopy over 200 feet of that, plus lighting along the entire platform.

Vergennes will be served by a newly remodeled train depot and new platform at the Ferrisburgh Park and Ride lot off Route 22A, near Route 7.

“The agency will announce more details about the event soon, as well as information about ticket sales, including 50% promotional fares on the Ethan Allen Express this summer,” reads the release, which also promotes a celebratory event to mark the service’s launch, at Burlington’s Union Station on July 29 from 9 a.m. until the train departs at 10:10 a.m.

The debut of this expanded passenger rail option has been somewhat of a moving target, due to extensive planning and the need to upgrade the tracks between Rutland and Burlington to accommodate higher speed passenger rail, according to state officials.

Creation of the rail tunnel high enough to accommodate potential double-decker passenger rail cars caused major disruption in downtown Middlebury between 2017 and this past September. The finishing touches on the $75 million downtown rail tunnel project were done this spring.