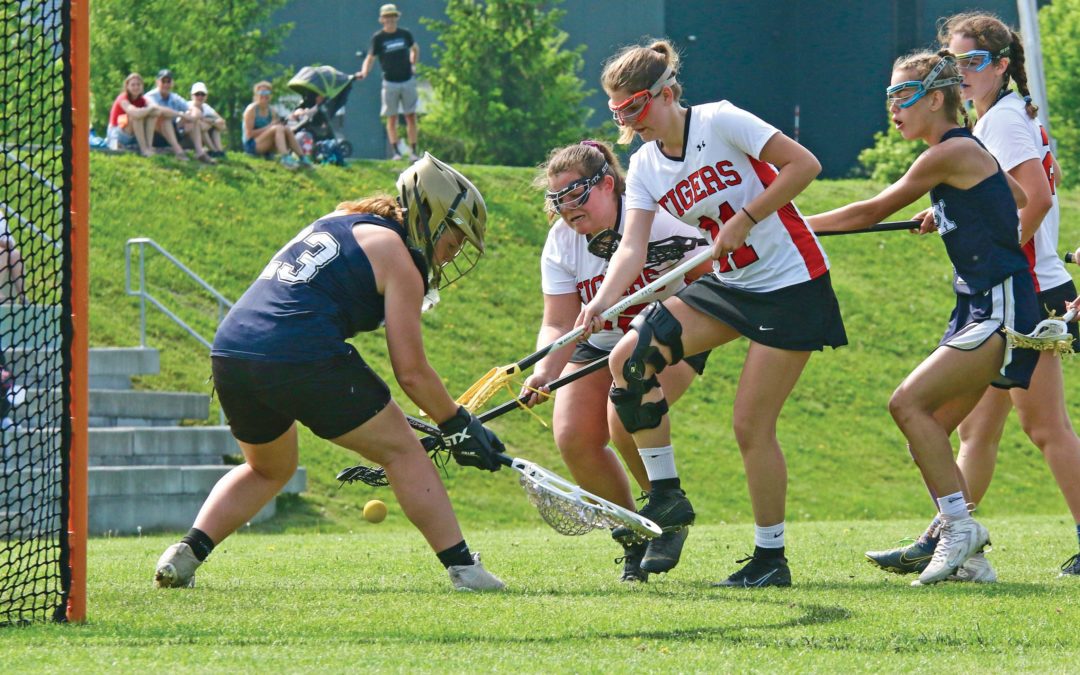 TIGERS ALANNA TRUDEAU, left, and Nyna Cole scramble with Essex goalie Sierra Harris for a loose ball in the first half of the Tiger girls’ lacrosse team’s 11-8 home victory on Saturday, their second of the week. Independent photo/Steve James
By Andy Kirkaldy

MIDDLEBURY  — The Middlebury Union High School girls’ lacrosse team had suffered a disappointing 7-5 loss at Essex the last time the two squads met, and the Tigers were determined not to let it happen again on Fucile Field on Saturday — especially not when seniors Reese Fitzgerald, Fairley Olson, Ivy Doran, Sophie Larocque and Alanna Trudeau were also being honored.

Notably, Larocque (four), Doran (three) and Trudeau (one) combined for eight goals and Olson returned from an injury to play strong defense in an 11-8 victory. The Tigers also picked up two recent road wins to improve their record to 5-8.

Doran, a tri-captain with Olson and Trudeau, explained what helped the Tigers bolt to a quick 4-1 lead on the way to Saturday’s hard-fought home victory.

“Just coming into the game today our energy was really great. It was high because of senior game,” said Doran, a midfielder. “And we had a close game with them last time. We really wanted this win. You could tell that we were fighting for the win.” 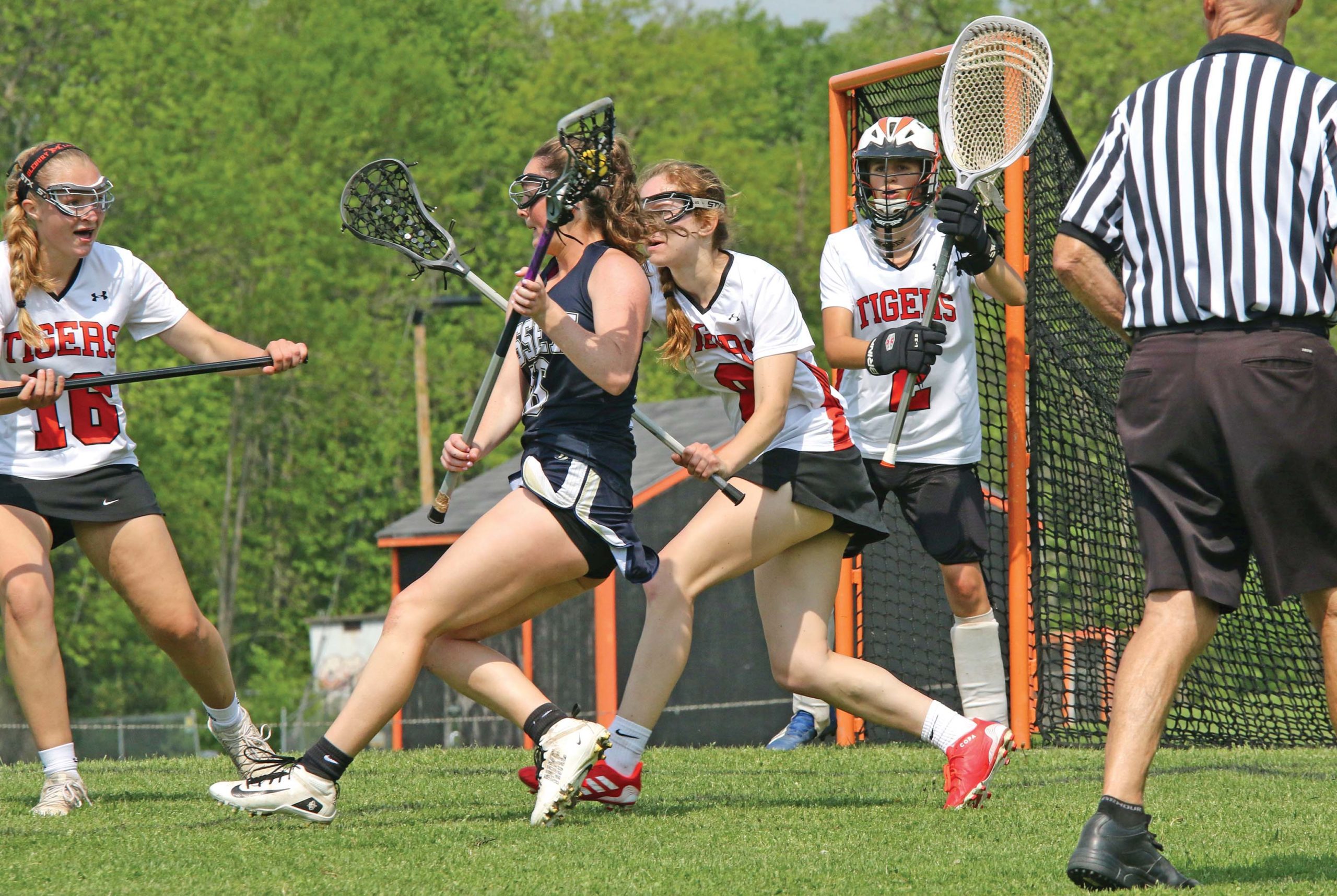 Coach Deena Greenman agreed the Tigers had an edge to their play.

“The intensity the kids brought because it was the senior game was a huge difference, and just wanting it,” Greenman said.

Larocque, a midfielder, providing an early spark, scored three goals in the first 9:19 as the Tigers bolted to a 3-1 lead. The first came shortly after she won the opening draw.

Essex goalie Sierra Harris stopped her initial bid, but the Tigers maintained possession, and Larocque got the ball back, raced into the fan and finished high over the goalie’s left shoulder 47 seconds in.

Hornet Lily Boutin equalized at 22:37, but at 19:36 Larocque again broke loose in the fan, this time picking the lower left corner. MUHS led the rest of the way. 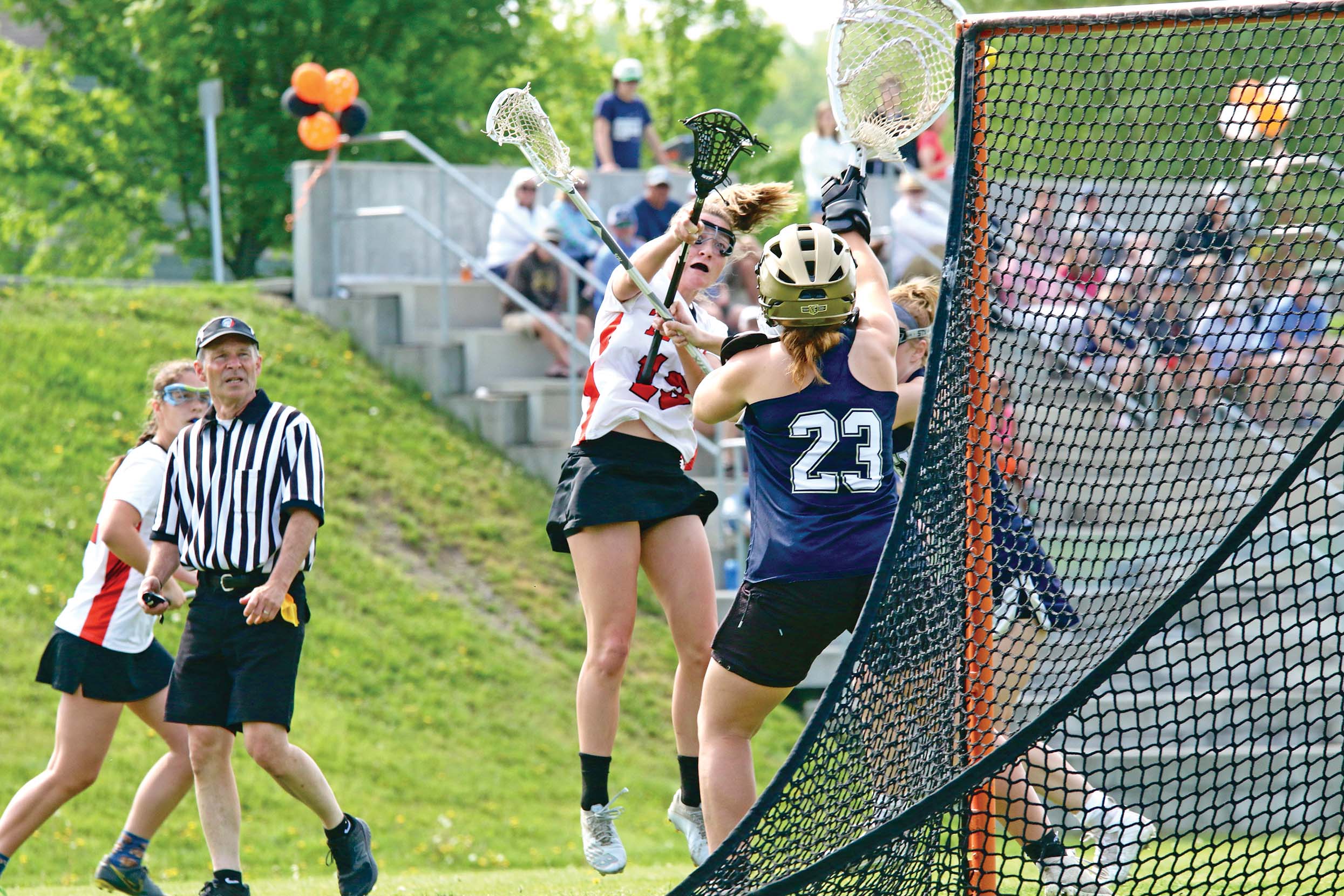 MUHS SENIOR CO-CAPTAIN Ivy Doran, a midfielder, tosses in one of her three goals during the Tiger girls’ lacrosse 11-8 home win over Essex on Saturday morning.
Independent photo/Steve James

Tiger goalie Ava Schneider made a point-blank save on Hornet Breya Montague a minute later. Schneider made seven of her nine saves in the first half before the Tiger defense contained the Hornets more effectively after the break. In the second half the Tigers better adapted to the Hornets’ offensive tactics, according to Greenman, and started to win more ground balls.

“The ground balls were tough the first half, but we stepped those up,” she said.

In the first half, when Schneider was busier, Greenman said her defenders — Elisabeth Crawford, Becca Orten, Olson, Abby Tufts, Naomi Brightman and Hana Doria all saw time in the back — had trouble with the Hornets’ solo moves. But in the second half their zone adjusted to provide more effective help on defense.

“Our defense figured out they mostly crashed, and they were able to pick up on that,” she said.

The goalies then took over the game for the next 10 minutes. Schneider stoned Ava Spooner and Abigail Lacross twice each and Addison Stratton once. Harris, who finished with eight saves, stopped Sara Kent in transition and denied a Trudeau spin move, and she also got help from the crossbar on Lia Robinson’s bid.

Finally, with 5:32 left in the half, Montague scooped a loose ball home to trigger a scoring spree. She added a free position conversion a minute later. Robinson answered with a doorstep conversion on a feed from Ada Weaber at 3:52 to restore a two-goal MUHS lead. 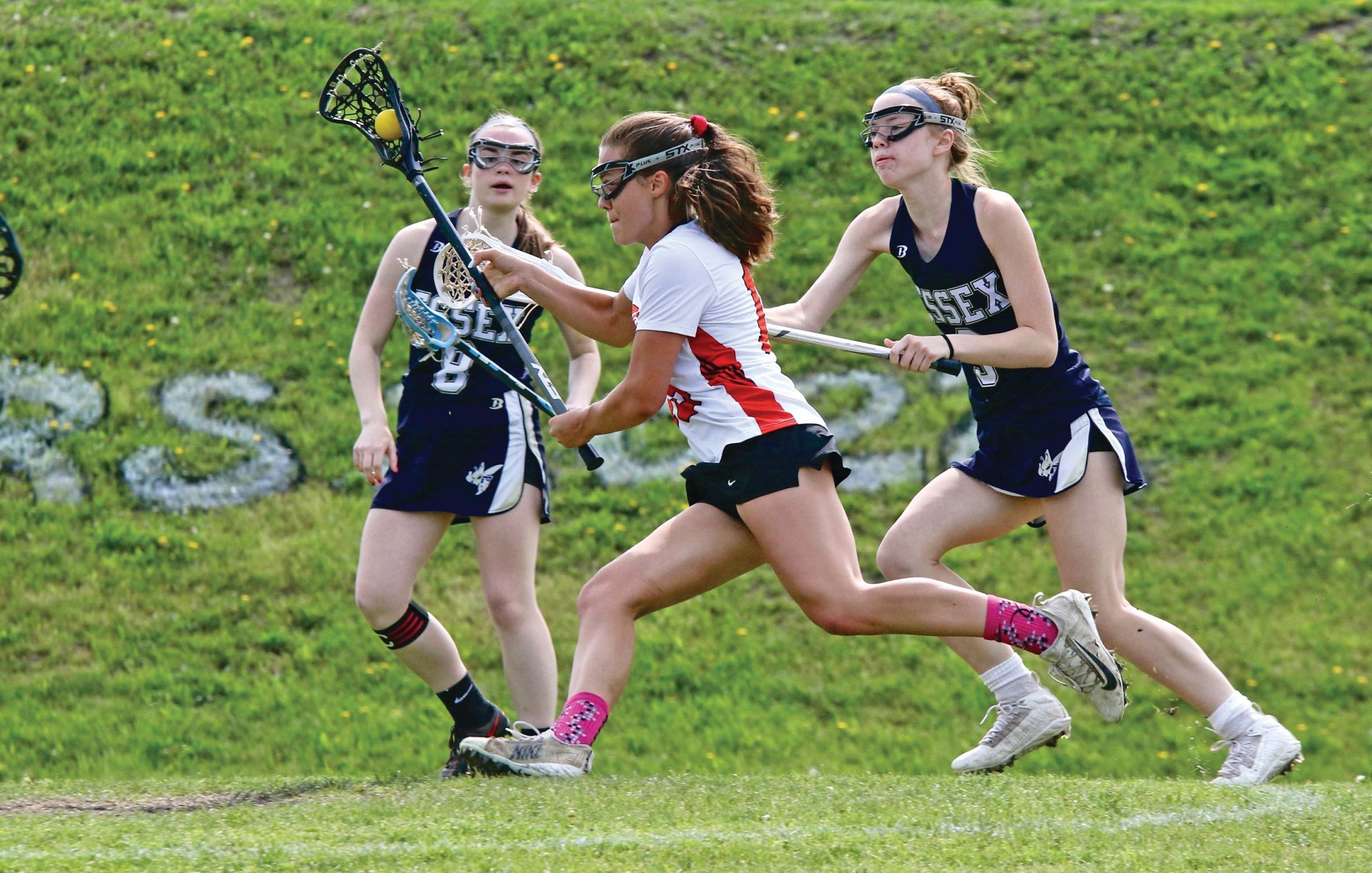 Montague netted another goal after a ground ball win at 2:40 to make it 5-4, but Larocque scored her fourth at 1:38 after Doran broke up a clear, and with 16 seconds left in the half Doran whipped a free position high into the net to make it 7-4 at the half.

Essex cut the lead to two goals three times in the second half, but each time the Tigers responded. Hornet Olivia Bergeron curled from behind the net to make it 7-5 at 22:12, but the Tigers created three good chances over the next six minutes, and the third went in: Weaber dodged in from the left side and tucked a shot inside the left post at 16:21.

At 15:38 Kent, a freshman playing her first varsity game, cut through the fan, took a Weaber feed and whipped a shot home inside the right post, and it was 9-5.

Essex made one more run at MUHS. Bergeron answered with a transition goal off the draw, and at 12:19 Boutin rolled in from the left and made it 9-7. This time Doran provided the response, bursting through a knot of defenders in the fan and scoring at 12:33.

Montague added her third goal at 8:26 to make it 10-8, but Trudeau netted the game’s final strike, calmly depositing a strong transition feed from Weaber at 7:50. 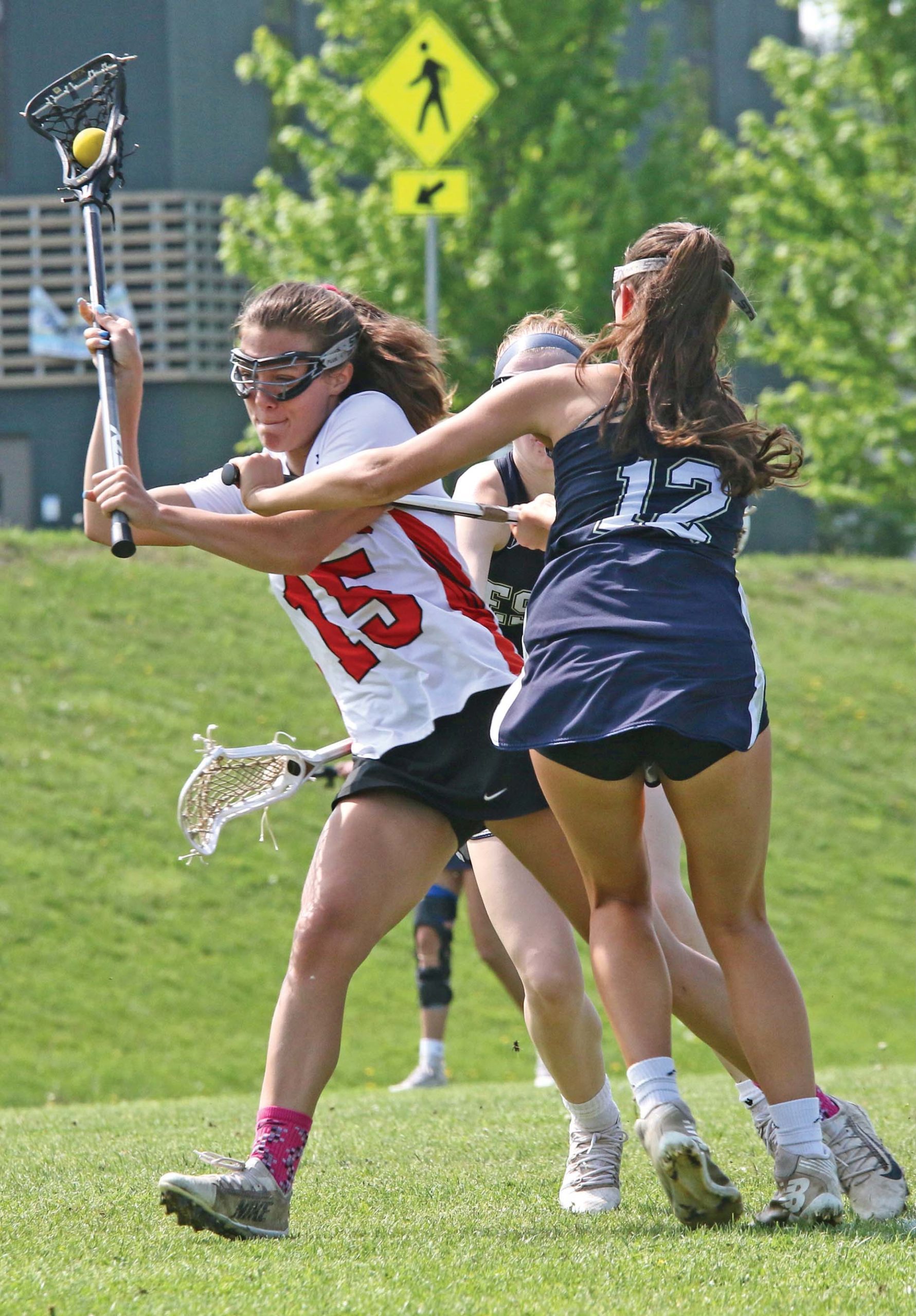 The Tigers then won the draw and ran four minutes off the clock. Harris stopped shots by Larocque and Kent to give the Hornets at least a remote chance, but Doran picked off a pass in the defensive end with two minutes to go to erase any remaining Essex hopes.

Greenman was pleased with all the Tigers afterward.

“It was a full team effort. Everybody played. Everybody contributed,” she said.

On May 18, the Tigers won at Mount Mansfield, 8-5, as Weaber racked up four goals and an assist and Schneider made 10 saves. Doran, Cole, Nora Wootten and Larocque scored a goal apiece, and Trudeau added two assists.

They are set to wrap up the regular season with visits to two top D-I teams: CVU on Wednesday and St. Albans on Saturday. Division I postseason play will begin next week.

The Tigers will enter the postseason with a high seed or a winning record, but Doran said they have done well this season in maintaining an upbeat attitude and focusing on improvement as much as results.

“We’re in a hard division. And in each game we notice things that we do well, that we work on in practice and put into play in the game,” she said. “I think we’re really proud of ourselves for working hard and playing hard in every game that we play. That keeps our spirits up.”

Greenman agreed the Tigers have successfully navigated the challenges of the season.

“We’ve talked about mental toughness and supporting one another,” she said. “We have three goals every day: Have fun, try something new, and lift each other up with our words.”