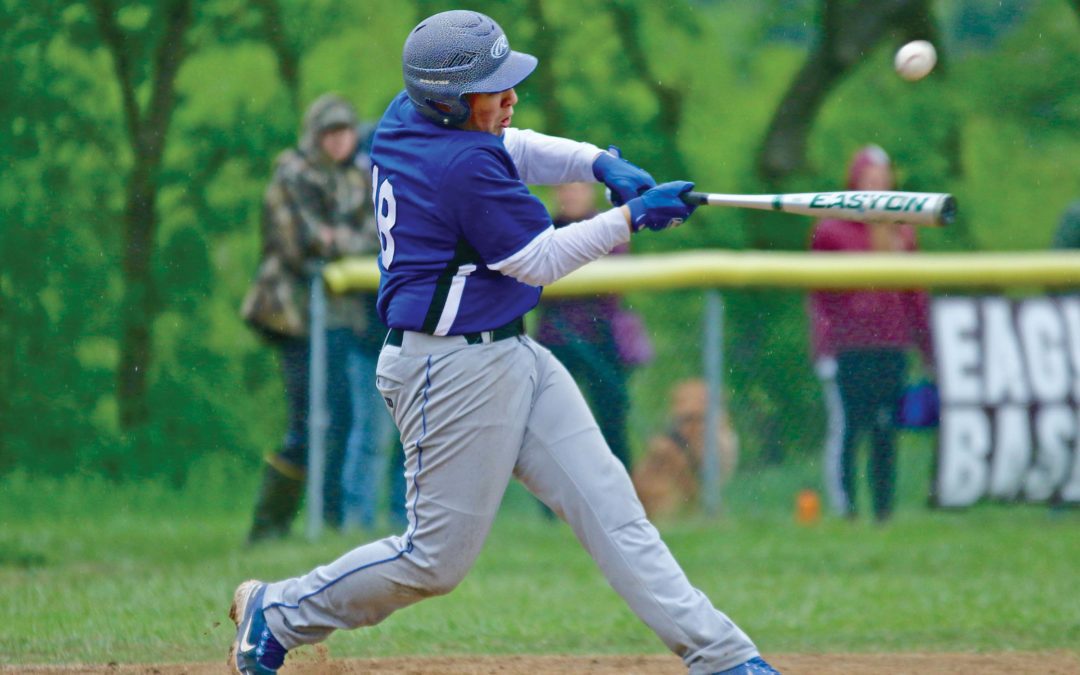 COMMODORE EYON TEMBREULL makes contact with an Eagle pitch during Tuesday’s game at Mount Abe. Tembreull picked up an RBI before the game was suspended until Wednesday with the Eagles up, 5-4, in the fourth inning. Independent photo/Steve James
By Andy Kirkaldy

ADDISON COUNTY — The high school baseball schedule between May 11 and 17 called for Mount Abraham to play two games against their close county rivals, but the Eagles only played one-and-a-half of them. 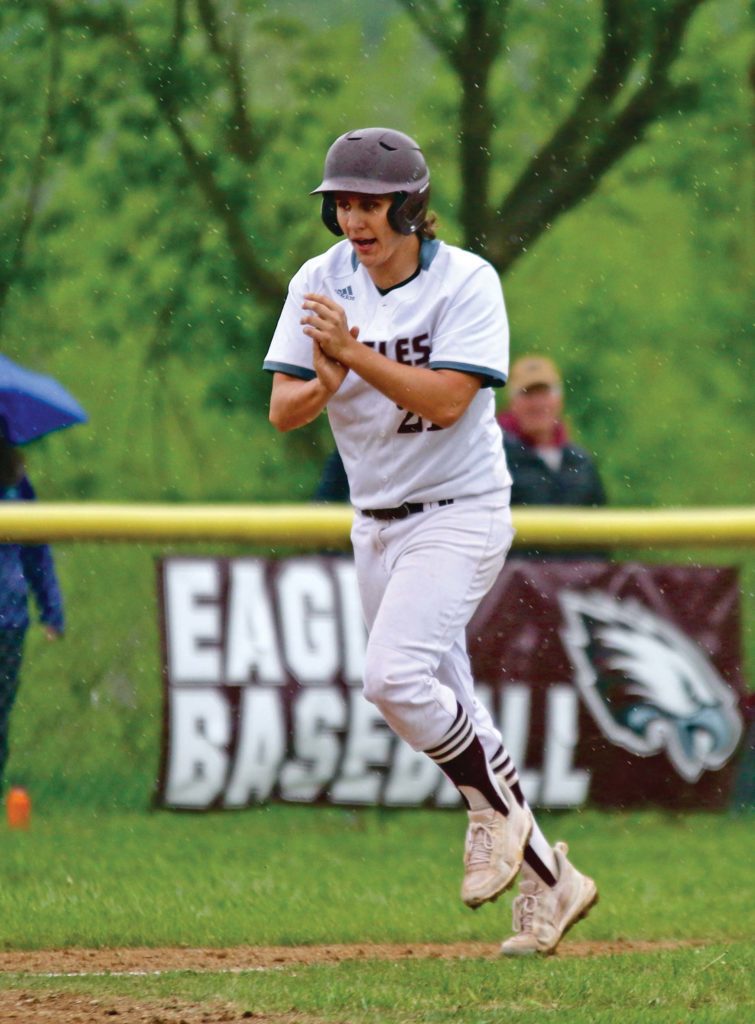 EAGLE SENIOR CARTER Monks is happy to score one of the five runs Mount Abe plated before rain suspended the Eagles’ Tuesday home game vs. VUHS until Wednesday. They led, 5-4, in the fourth inning.
Independent photo/Steve James

On May 12 the Eagles defeated Middlebury, but rain struck on Tuesday while they were playing Vergennes, and that game — a close one — was suspended to Wednesday, after the deadline for this edition.

Elsewhere, the Commodores lost two close games on the road, MUHS lost once, and Otter Valley split a pair of contests.

When VUHS visited Mount Abe on Tuesday, the game started with on-and-off showers that eventually became steadier, and the umpires called it with the Eagles up, 5-4, in the fourth. It was set to resume on Wednesday afternoon.

The Commodores struck first with a pair of runs off Eagle starter Gus Hill, who allowed four runs (two earned) on two hits and one walk, and struck out six in four innings.

Mount Abe rallied to score five straight off Tyler Kimball, who allowed the five runs, none earned, on two hits and four walks while whiffing three. In the difficult conditions the teams combined for seven errors, five by the Eagles.

For VUHS Kimball had a hit and an RBI, and Parker Kayhart singled, walked and scored a run. Zeke Dubois, Gabe Scribner and Peyton Paquette scored the other runs.

The game was finished on Wednesday, and the Eagles came out on top, 6-4.

On May 12, the host Eagles coasted past the Tigers, 11-3, as Neil Guy earned the pitching win and had two hits, including a homer. Mansfield also homered for Mount Abe, while Denecker knocked out three hits, and Ethan Thompson and Reiss Hendee had two hits apiece.

Tucker Morter led MUHS with a pair of hits, and Jack Wallace took the pitching loss.

On Saturday, the Eagles defeated host Enosburg, 7-2, as Mansfield tossed a complete-game three-hitter while fanning 11. 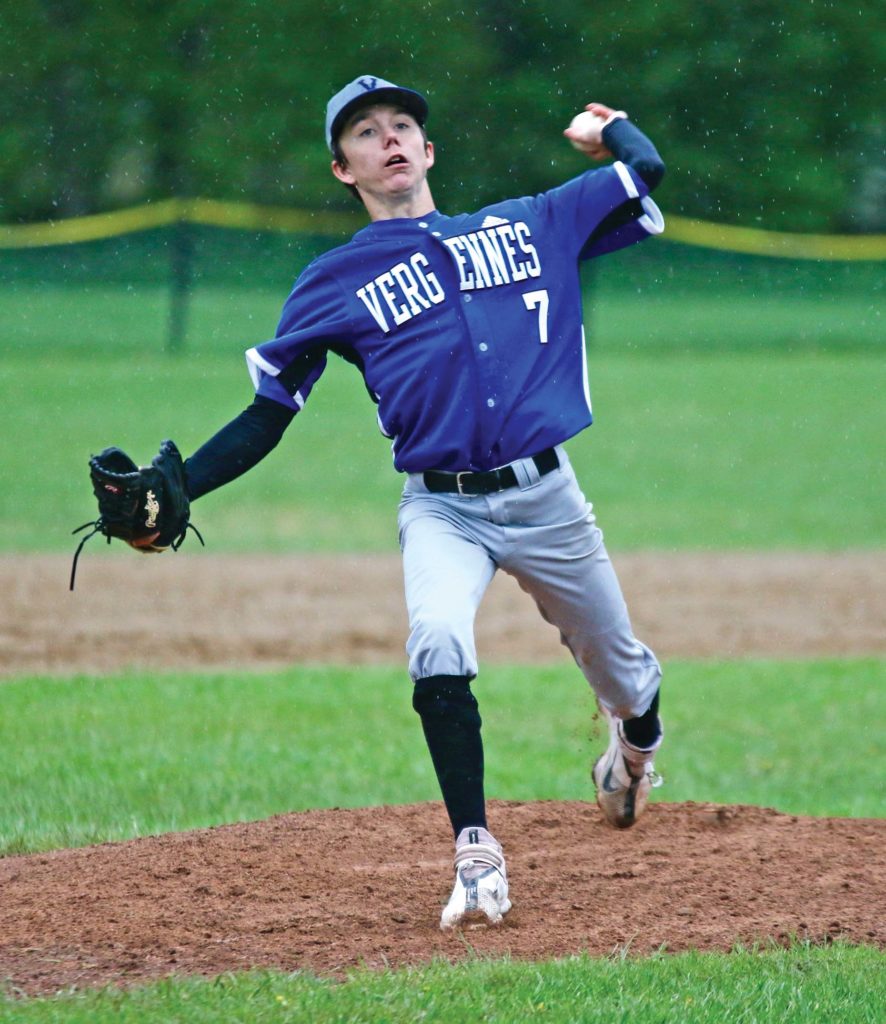 TYLER KIMBALL GOT the start on the mound for VUHS in Tuesday’s rain-shortened game at Mount Abe. It was set to resume on Wednesday with the Eagles up, 5-4, in the fourth inning.
Independent photo/Steve James

Also on Saturday, host Milton defeated the Tigers, 10-4, leaving them with a 1-9 record after their Tuesday game at Missisquoi was postponed until Wednesday.

Xavier DeBlois had drilled a three-run double in the seventh to give VUHS the lead, but the Hornets tied the game in the bottom of the inning to force extra innings. Nate Muzzy and Elijah Duprey added two hits apiece. Muzzy started and went five innings, and Kimball took the loss after tossing 3.1 innings of relief.

On May 12, the Otters blanked host Green Mountain Union, 13-0, in five innings. Andy McEnerny tossed the shutout for OV. 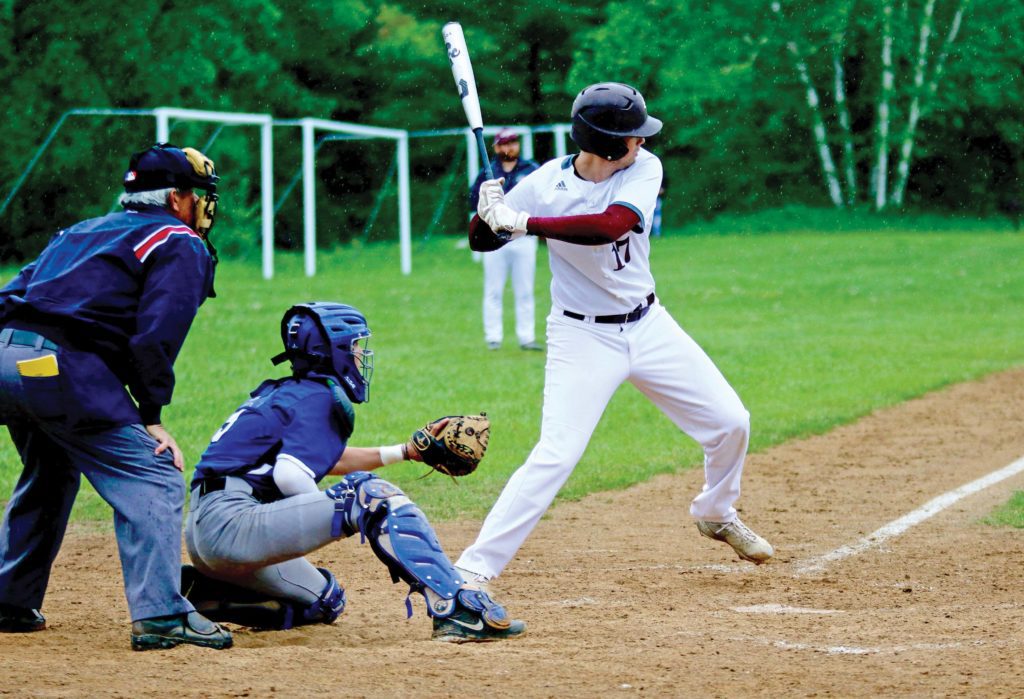 EAGLE SENIOR ADAM Mansfield gets ready to take a cut at a Commodore pitch on Tuesday. Mansfield had a hit and two RBIs before rain suspended the game in the fourth inning. It was set to resume at Mount Abe on Wednesday with the Eagles up by a run.
Independent photo/Steve James