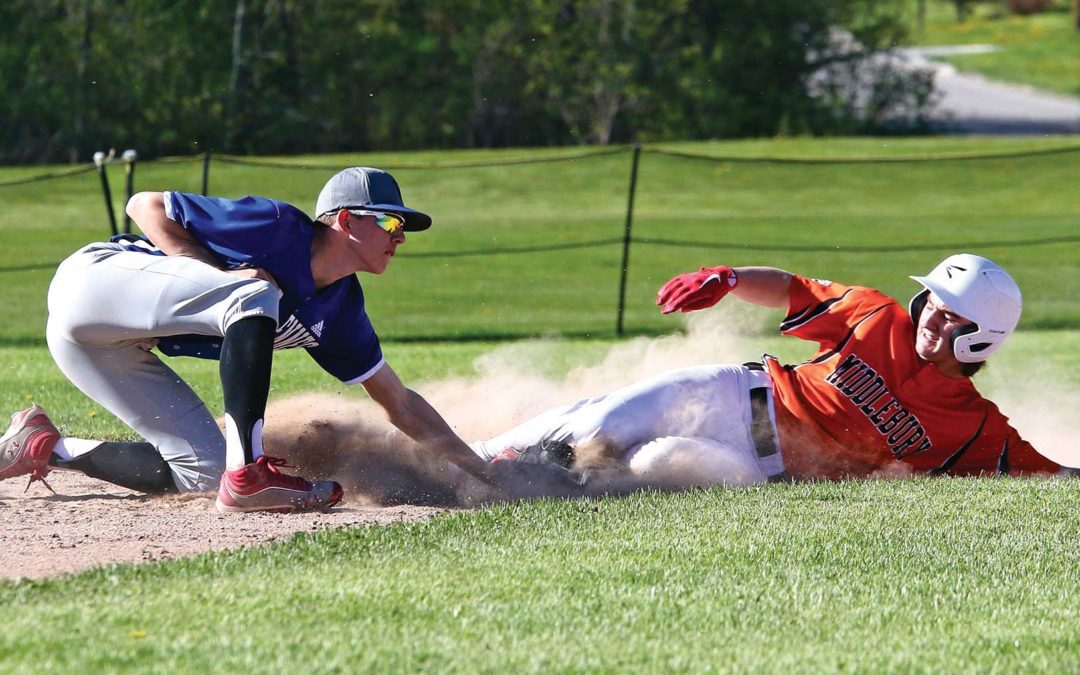 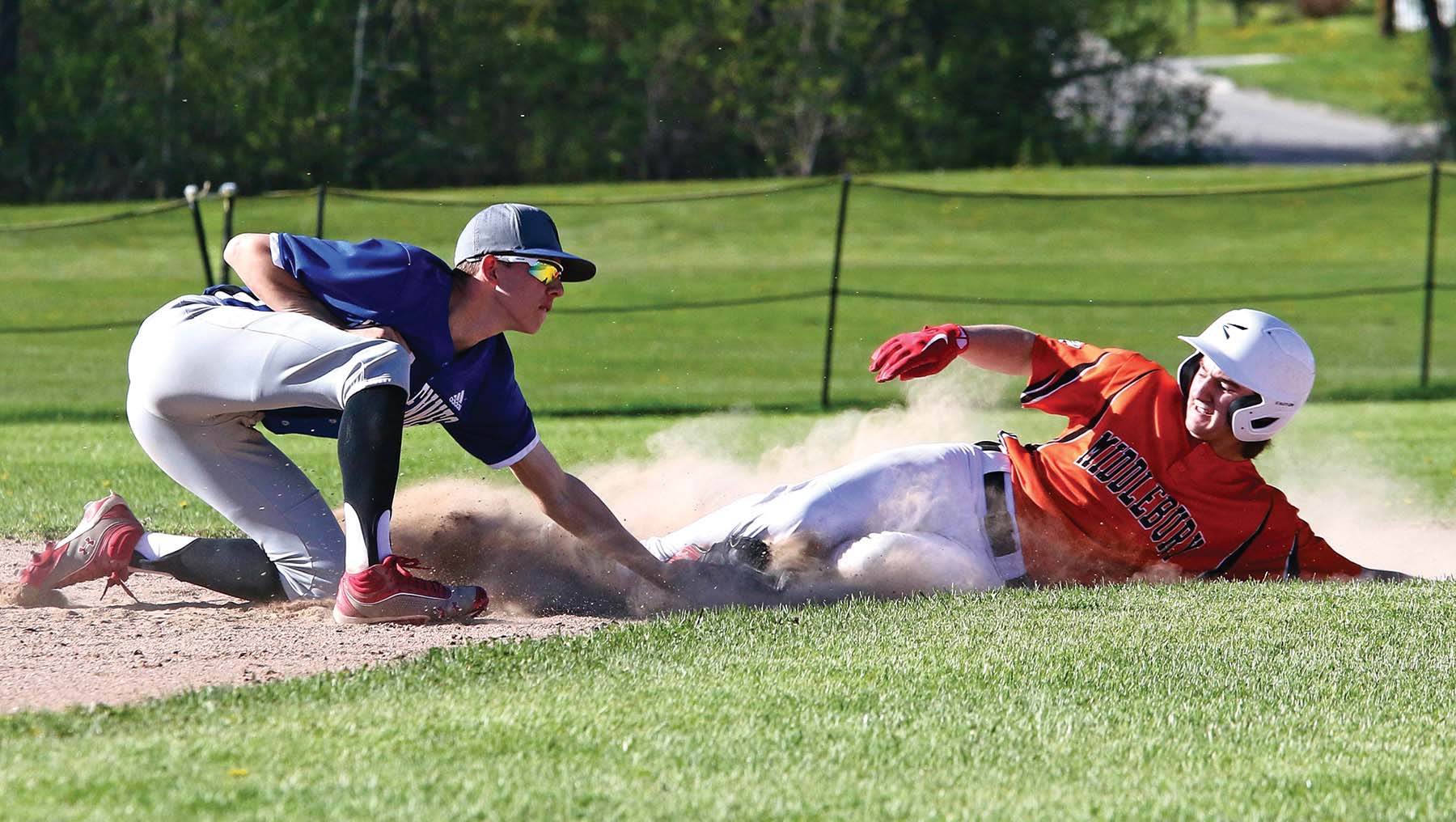 TIGER SOPHOMORE RILEY Disorda is out at second on a close play as Commodore shortstop Zeke Dubois applies the tag. Disorda tried to stretch a third-inning single into a double during the Tigers’ win on Tuesday. Independent photo/Steve James
By Andy Kirkaldy

MIDDLEBURY — In a Tuesday battle of rebuilding high school programs, host Middlebury came out on top of Vergennes for its first varsity baseball win since 2019, 6-4.

Carter Paquette went the distance, allowing 11 hits, not all hard-hit, striking out nine and walking one. He showed movement on his fastball, kept hitters off-balance with a breaking ball, and at times had the Commodores chasing pitches. And he seemed to get stronger as the game wore on, allowing one hit over the final two innings.

“He throws lots of strikes, and today he had the defense to back him up,” Coach Paquette said. “His fastball got a little harder as he got pumped up toward the end. Maybe the first victory made him go a little harder.”

VUHS Coach Andy O’Brien, another first-year coach, saw his team drop to 2-5 after a run to the D-III semifinal round a year ago and then seeing many athletes graduate. He said his defense could have been a little stronger behind losing pitcher (and cousin of the winning pitcher) Peyton Paquette, and his batters at times helped out the Tiger hurler.

“We just didn’t support our (pitcher). He followed the game plan, did what we wanted him to do. We just didn’t produce, didn’t execute the small things we needed to do,” O’Brien said. “(There were) some ground balls the kids have got to start laying out for, sacrificing, which we’ve been building upon, and then we were just not executing at the plate.”

The Tigers, who have just one senior and one junior on the roster, took a 1-0 lead in the first when Tim Whitney reached on an infield error with two outs and Paquette singled him home.

The Commodores equalized in their next at-bat. Gabe Scribner singled, Tyler Kimball bunted him to second, and Reese Paquette (yes, another cousin) poked an RBI single.

The Tigers erupted for four runs in what proved to be a decisive bottom of the second inning. Riley Disorda led off with a single, stole second and moved to third on an errant throw on the play, and scored on Jacob Kemp’s RBI ground out.

Senior Jack Wallace re-started the rally with a single, and leadoff hitter Alex Sperry bunted his way on. Catcher Cole Warren loaded the bases with another single, and then came a key play.

Whitney drilled a hard-hit two-out grounder that could have ended the inning, but it bad-hopped the infielder and went for an RBI single. Carter Paquette followed by pulling a double just out of the diving reach of VUHS third baseman Eyon Tembreull, and it was 5-1. It could have been more, but Kimball in left field made an outstanding catch to end the threat. 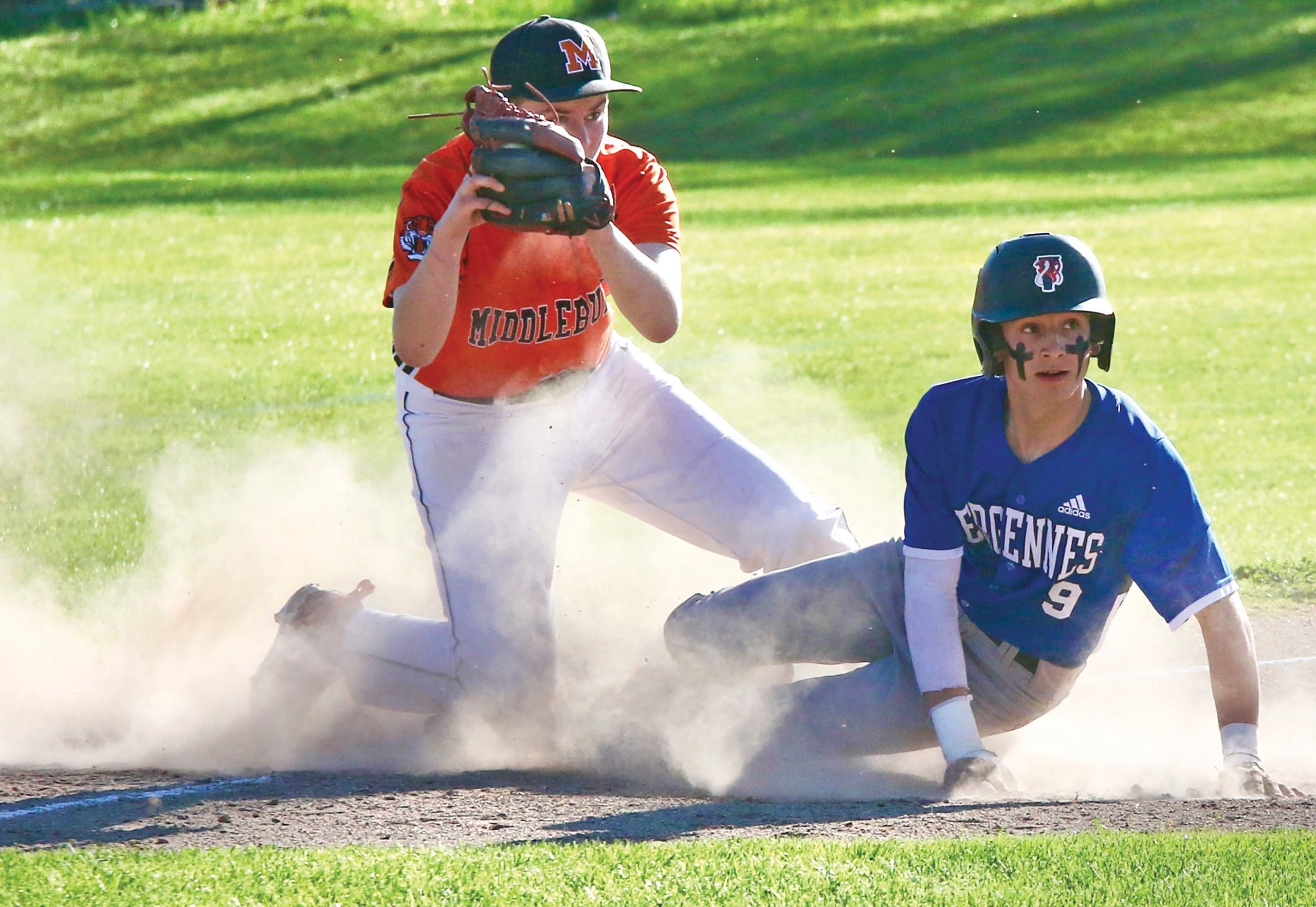 MUHS THIRD BASEMAN Jack Wallace and VUHS baserunner Elijah Duprey look to the umpire for the call on this close play on Duprey’s sixth-inning steal of third base in Tuesday’s game at MUHS. The ruling: Safe, but the Tigers stranded him there.
Independent photo/Steve James

The Commodores fought back in the third, opening the inning with back-to-back doubles by Zeke Dubois and Peyton Paquette to make it 5-2. A wild pitch moved courtesy runner Elijah Duprey to third. Tembreull then walked and tried to steal second. Warren threw him out, with Duprey scoring on the play, and it was 5-3.

The Commodores then loaded the bases with two out on a Scribner bloop single and infield hits by Kimball and Parker Kayhart. But Carter Paquette ended the threat with a strikeout, and runs after that became harder to come by for both teams.

Sperry manufactured a run for MUHS in the fourth. He doubled, stole third and scored when the throw got away. The Commodores got their final run in the fifth, when Kimball singled and Reese Paquette doubled him home.

Both coaches afterward were confident their teams are on the upswing. O’Brien pointed to the strong all-round game VUHS played in a 10-2 win over Milton three days earlier.

Paquette was happy to see better defense and said as long as the Tigers maintain a positive frame of mind they will continue to improve. They have played five tough Division I teams in the early going, and the rest of the way his team will battle in its weight class.

“I try to tell them we’re young. We’re facing guys who are a couple years older. We’re going to take our knocks,” Paquette said. “But don’t let it get you down. Just keep up the hard work and play the game you know.”