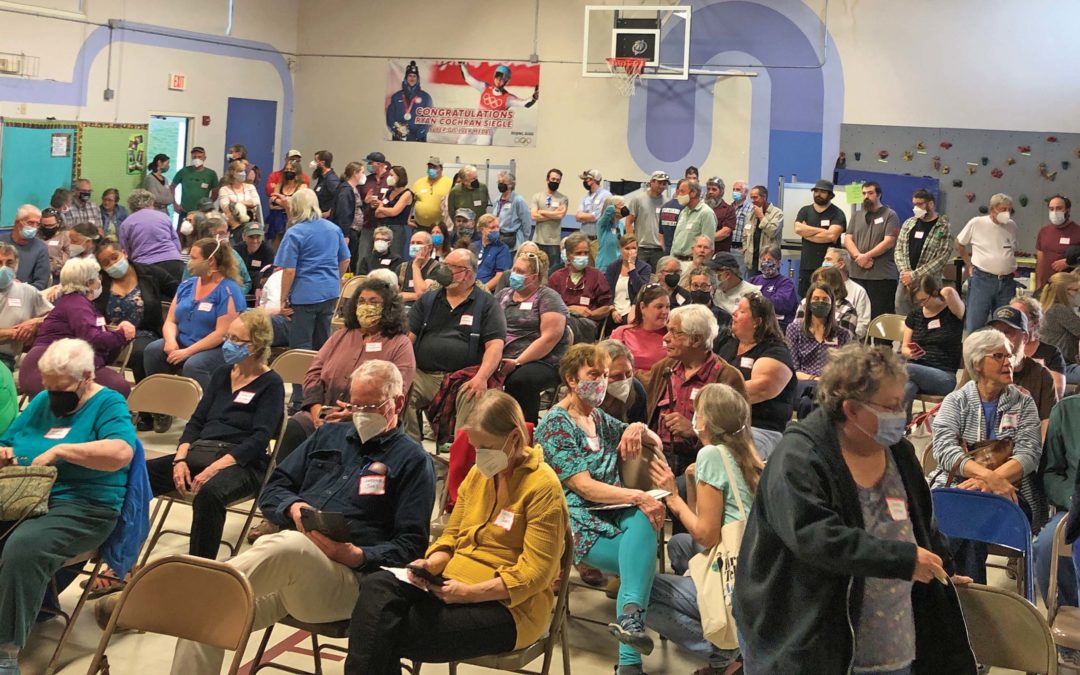 MORE THAN 200 registered voters in Starksboro showed up at a special town meeting at Robinson Elementary School on Tuesday night to vote on a proposal to withdraw from the Mount Abraham Unified School District. The meeting got a late start because of the unusually large crowd, but voters took little time to approve both articles. Independent photo/Christopher Ross
By Christopher Ross

STARKSBORO — So unusually high was the turnout at Starksboro’s special town meeting Tuesday night that it took a while to get everyone signed in.

More than 200 registered voters turned out at the Robinson Elementary School multipurpose room to vote from the floor on a proposal to exit the Mount Abe school district, and the overwhelming majority said “yes” when the question was finally asked.

But first there was the delay. Still, there were few if any signs of impatience outside or in the building, where most people heeded the recommendation to wear masks.

A few minutes after the 7 p.m. meeting was scheduled to start, Town Moderator Keegan Tierney announced it was going to be a “standing room only” event and invited the young and the restless and the energetic to do the standing, so they did.

People chatted with neighbors and availed themselves of free community-provided snacks, and the room grew hot with bodies and accumulated sunshine.

Elsewhere in the school building the “olders” minded the “youngers” so parents attending the meeting could focus on the business at hand.

After a while, Tierney invited the older and the sturdier to join the standing if they could.

At 7:45, looking out over a sea of townspeople, the moderator called the meeting to order and read the articles aloud.

Article 1 asked if the town should withdraw from the Mount Abraham Unified School District.

Article 2 asked if the selectboard should be authorized to terminate the withdrawal process if the ANWSD-MAUSD Merger Study Committee enshrines a town’s right to vote on school closure, or if the merger proposed by that committee fails to win approval.

Nancy Cornell, a member of the group Starksboro Save Our School (SOS), which organized the petition calling for Tuesday night’s vote, opened the discussion.

“Starksboro’s withdrawal vote tonight is really about preserving our town’s right to vote on school closure,” she said.

If the Robinson school were not viable, Cornell would vote to close it, she said. And she was sure most of her neighbors would do the same.

“But that’s not where we are. This vote tonight isn’t about keeping Robinson open no matter what. It’s about making sure that the people closest to the kids and the community get to decide. It’s about preserving our town’s right to make this decision. It’s about knowing that our diverse community has the wisdom to do the right thing, whatever the right thing is.”

Starksboro SOS feels it has made significant progress in the Mount Abraham Unified School District to preserve a town’s right to vote on any proposal that would close or remove children from its local school, Cornell said. But the ANWSD/MAUSD Merger Study Committee could undo all of that.

Additionally, the Legislature is working on a bill that would make the rules for withdrawing much more difficult.

In short, Cornell said, “Voting to withdraw is now the only way to ensure we maintain our right to vote on school closure if a merger goes through.”

When Cornell finished, Tierney asked if anyone else would like to speak.

Around the room heads turned, looking for raised hands. There were none.

“Fantastic,” Tierney whispered into the microphone, prompting laughter, then applause.

Those in favor of Article 1 responded with vigor and the room filled with Ayes. If there was a Nay among the 221 voters, it was not audible.

The crowd erupted in whooping and clapping.

Discussion on Article 2 was more complicated, in part because the town attorney has recently expressed ambivalence about the selectboard’s statutory authority as spelled out in the article’s language.

In his opinion, it could possibly be contested in court, selectboard chair Koran Cousino explained, but he “was not advising that the voters do anything with the petition, necessarily, and/or amend the articles.”

Some residents, such as Mary Barnett, who spoke up during the meeting, were in favor of making a “clean break” from the school district and questioned the need for Article 2’s “off ramp.”

But as before, support for the article was overwhelming, though a dozen or two Nays were clearly audible.

As of March 22, Starksboro had 1,316 registered voters, according to Town Clerk Amy McCormick, which means the official turnout Tuesday night was roughly 17%.

Compared with Lincoln (MAUSD) and Ripton (Addison Central), which last year held school district withdrawal votes by Australian ballot and saw turnout in excess of 60%, Starksboro’s decision was made by a far smaller share of its residents.

But as Cousino explained in an April 26 Front Porch Forum post, the town didn’t have a choice about conducting voting from the floor.

“Floor voting is the method our town uses to vote on public questions at special or annual town meetings,” she wrote. “This method of voting cannot be changed by the selectboard. There must be a town-wide vote to switch to Australian ballot at an annual or special meeting.”

Starksboro has switched to Australian balloting in recent years only because of a temporary pandemic-related act of the Legislature, she added.

Some residents have expressed frustration about the town’s current voting rules.

“I think this is a very discriminatory approach that only allows those town members who are healthy enough and able to attend the town meeting to vote,” wrote Jon Fenner in a May 3 Front Porch Forum post lamenting the “limits to democracy in Starksboro.”

Fenner added he’s hoping to organize an effort to get the local law changed.

The next step in the withdrawal process requires the other four MAUSD member towns of Bristol, Lincoln, Monkton and New Haven to ratify Starksboro’s withdrawal vote.

They all have to vote on the same day, so it’s unlikely to get scheduled until August, during the primaries for the 2022 election, Cornell said.

By that time, it’s possible the Legislature will have changed the rules.

H.727, if passed, would go into effect on July 1 and would effectively force Starksboro withdrawal advocates to start all over from square one.

“If enacted (the bill) will retroactively nullify three school district withdrawal elections (in Ripton, Lincoln, Starksboro) even though the elections have been, or will have been properly conducted under applicable law at the time of the elections.”

Olson conceded the Legislature has the power to regulate the conduct of elections, but it “does not have the constitutional authority to retroactively nullify an election, once that election has been properly held under state and federal laws in effect at the time of the election.”

Should it successfully withdraw from the MAUSD, Starksboro also faces the same hurdles as Ripton and Lincoln — finding an entity to provide mandated, and costly, “supervisory services,” such as special education, transportation and district administration.

Some residents have expressed hope that Starksboro could join Ripton and Lincoln’s efforts to form a Mountain Supervisory Union to take care of those services, but that’s a distant milestone along a withdrawal path that, as Cornell said Tuesday night, has many steps.

Still, Cornell was pleased with the town meeting results, she said Wednesday morning.

“It was so gratifying to see so many Starksboro residents turn out to support our wonderful Robinson Elementary School, and to affirm, support, and ensure our right to determine its future.”