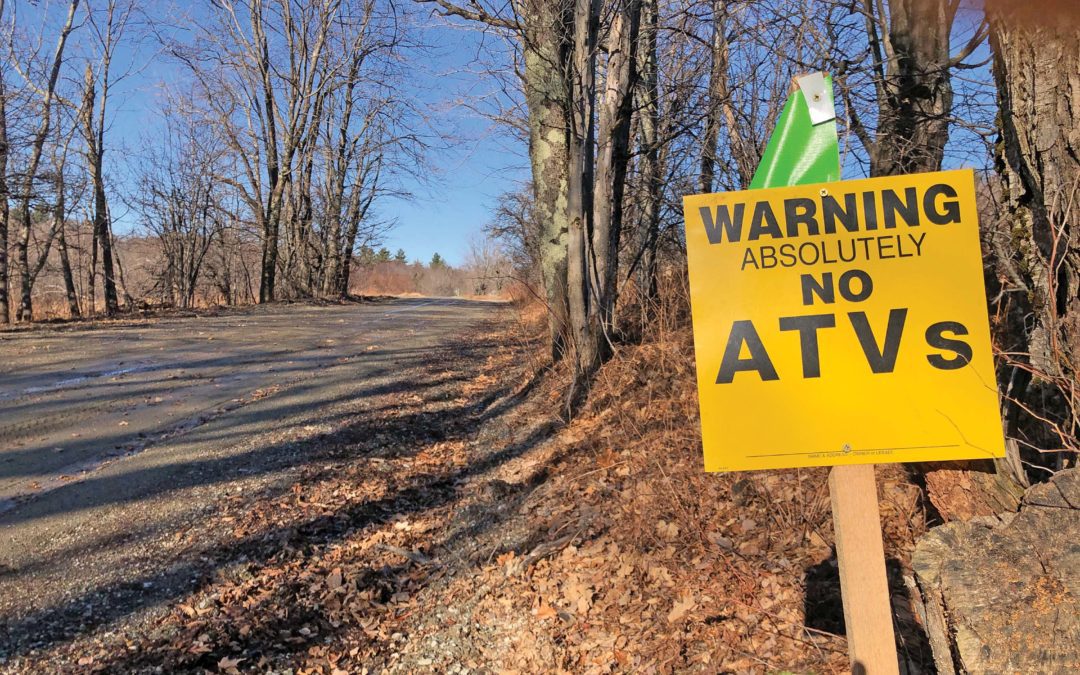 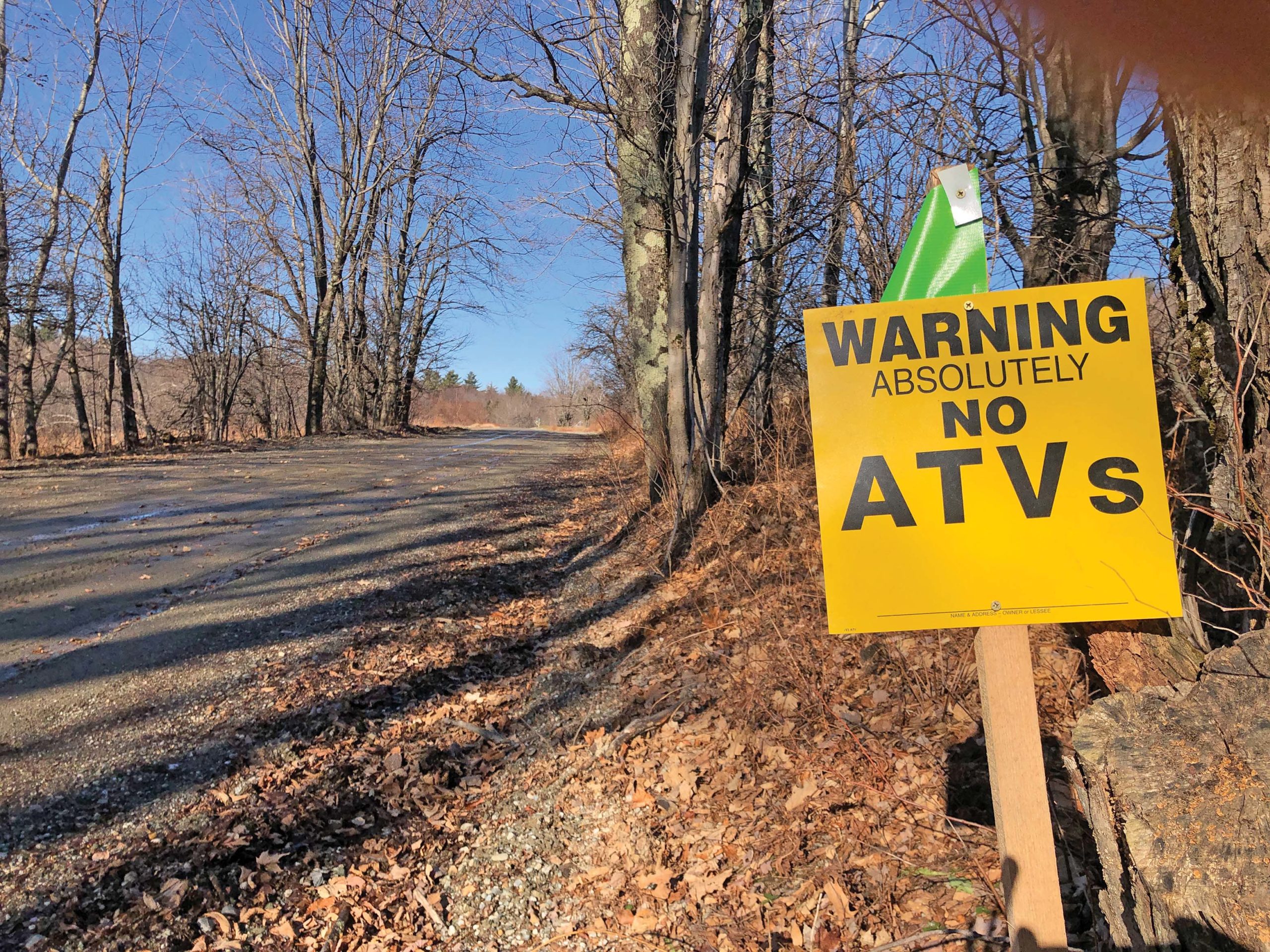 GREEN PENNANTS SUCH as this one on Ireland Road in Starksboro should be used to clearly mark the boundaries of the snowmobile trail. But there is no designated trail along the road pictured, and local residents say this and other green pennants were put up before VAST asked for or received town permission to establish a trail here. Independent photo/Christopher Ross
By Christopher Ross

STARKSBORO — After months of community debate and public discussion, a request by snowmobilers to ride on certain Starksboro roads has failed to win approval from the town selectboard, which plans to make its official decision in writing.

On April 26, just over four months after receiving an initial inquiry from the Mt. Abe Snow Sports / Snowmobiling Club (MASSSC), the board voted 4-0 to approve a public statement indicating it would deny the club’s request.

For selectboard member Carin McCarthy, the decision wasn’t “no for always,” but she felt the club’s request lacked detail, she said at the meeting.

“The process by which this has gone down was a bit ‘cart before horse,’” she said.

Snowmobiling on plowed roads is prohibited by state law, but municipal governing boards can grant exceptions. As previously reported by the Independent, MASSSC, which is a member of the Vermont Association of Snow Travelers (VAST), requested such an exception by phone on Dec. 12.

At the direction of the selectboard the club submitted its request in writing on Jan. 10, then submitted a revised version on Jan. 23.

MASSSC was seeking to include portions of Ireland, Conway and Robert Young roads as part of a proposed connector trail between the Lewis Creek Wildlife Management Area and the Jerusalem Corners Store.

Most of the property owners along the proposed route on Ireland and Conway roads have made or signed public statements opposing the request, citing noise, safety concerns, past snowmobiling incidents in the area and other issues.

Underscoring residents’ concerns was the fact that VAST trail signage had been posted along Ireland and Conway roads in early December, before the club had even requested permission. Later that month, one or more snowmobile club members removed a heavy boulder from the entrance to the Wildlife Management Area. The boulder had been put there by the Vermont Fish and Wildlife Department for the express purpose of preventing the passage of motorized vehicles.

“Those sort of behaviors, I think, I would want to avoid in the future as we move forward,” said selectboard chair Koran Cousino at the April 26 meeting.

For their part, many MASSSC members argued that they had residual permission to ride there because those roads had been part of an official VAST trail in the past.

The selectboard provided for lengthy public comment periods during its regular meetings this past winter, scheduled a special hearing on the matter on March 8, and collected testimony from people on all sides of the issue.

Information related to all of these deliberations can be found on the town website.

At their April 26 meeting, selectboard members noted that portions of the VAST connector trail will require permission from other stakeholders, including the Fish and Wildlife, which manages the Lewis Creek wildlife area. That permission has yet to be granted, which added to the selectboard’s reluctance.

If there is no way to get to the existing VAST trail because snowmobilers don’t have permission from Fish and Wildlife, “it doesn’t make sense to open the road,” said selectboard member John Painter.

But, like McCarthy, he expressed a willingness to consider future ideas.

“I’m a trails guy, I like to get out in the woods, for other people to do the same thing, and I would love to see for somehow those two trails to be connected, because I think it makes a lot of sense,” Painter said. “The way it’s rolled out this time around, and the information that we have right now, makes me say no. I just wonder if there are other ways that it can be done.”

Cousino acknowledged the amount of work VAST had put into its proposal, but pointed out that the five-member board has a “huge responsibility” when considering such requests, and she felt like the snowmobilers should have investigated more options before approaching the board.

“I’m sure there will be another request in the future, and I will be open to reviewing it,” Cousino said, “but I would just hope that the residents would all be conferred with before actions are taken, and that their buy-in is received before they’re impacted by use on their property or along their property.”

McCarthy suggested the snowmobilers could “try again next year.”

But Starksboro resident Margi Gregory, who lives along the proposed VAST trail, hopes the issue will not come up again, she told the Independent.

Gregory was among those who initially expressed concerns about the trail.

“Never did we expect our quiet country road might turn into a snowmobile superhighway, connecting VAST’s huge network of trails, and bringing in hundreds of people from all over the state,” she wrote to the selectboard on Dec. 23.

Since then, Gregory has appreciated the selectboard’s delicate handling of what has at times been a source of tension among neighbors.

If snowmobilers do submit another trail proposal, she said, “we don’t want it to be a divisive issue for the town.”