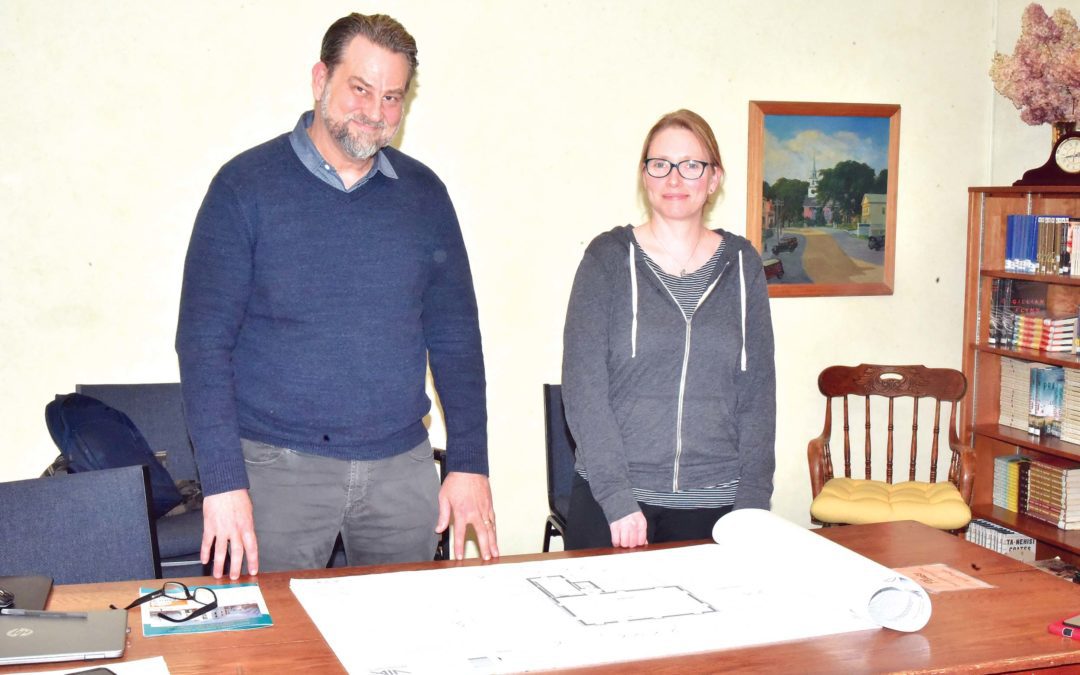 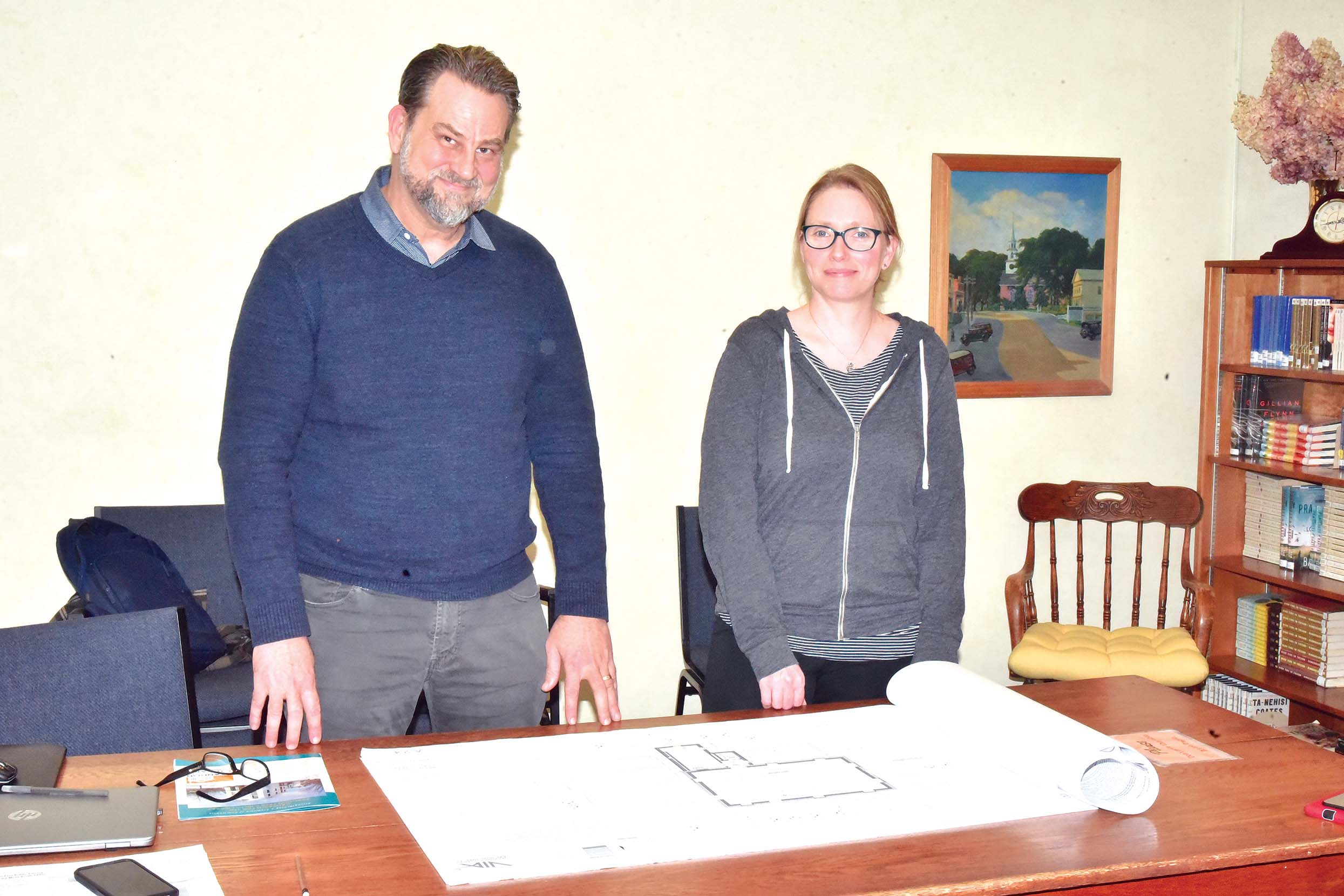 BRANDON — After two-plus years of planning for a capital campaign to renovate the Brandon Free Public Library (BFPL), the $2.2 million quest is well on its way.

“The train has left the station,” said a smiling and optimistic David Roberts, chair of the library board and of the campaign committee, adding that “sometimes it feels as if we’re chasing the train.”

That’s because once things as large as this project get rolling, there’s no turning back or even having a moment to catch your breath. “There are teams of people making this all happen,” Roberts said, singling out the leadership committee, the campaign committee, and groups of volunteers who have already met twice in preparation for “moving days” when the library will be moved to parts of the Brandon Town Hall to continue its important work as the renovation work begins.

On one of those occasions, it was a snowy, cold and raw March day, but nevertheless 55 people turned out to learn what would be needed and sign up to volunteer.

“There are a lot of people who put their heart and soul into this library, and you can really feel the love,” Roberts said of the community’s enthusiasm for the project.

That project has bold ambitions to renovate the entire interior of the library, plus adding an elevator and stairwell to reach all four floors of the building. In the process, the renovation and addition will add 1,700 square feet that includes 1,400 square feet of new patron accessible space; reconfigure book shelves and space that will add about 15% more space for books; and update all spaces and systems to be fire, life-safety and code compliant with the American Disabilities Act.

Because the BFPL is a freestanding nonprofit, and not part of the town’s budget, the vast majority of the $2.2 million is expected to be raised by private donations. In a typical year, the library relies on a town appropriations of about $90,000, as well as grants and fundraising for its annual budget of about $200,000 annually.

But because the library runs on such a tight budget, it needs community support to do any capital improvements. Hence, the last time the building saw any serious work was in 1967 when the Children’s Room was added to the library by connecting the two old buildings that were built virtually side-by-side.

AN ARCHITECT’S RENDERING shows the proposed improvements to the Brandon Free Public Library.

In those ensuing 55 years, while minor repairs and necessary maintenance have been done over the past 25 years, including a new furnace about eight years ago, no major capital campaigns have been launched to tackle bigger projects.

The building, which has asbestos mud in the sheetrock and lead paint throughout and needs to be brought into compliance with ADA laws, will also be reconfigured to create more usable spaces for today’s needs.

“We don’t just check out books anymore,” said librarian Molly Kennedy. “We’re a community center and we like to show up for our community in whatever way we need to. One of those ways is by serving the community as a community work space, so we’ll be setting up more private spaces to meet.”

Kennedy also said the renovation will expand the effective area of children’s reading rooms by taking out the wall currently separately the two areas on the main floor, while creating new space for a teens area on the second floor, and turning the third floor attic into a large community meeting space. The main floor will also feature an expanded and enclosed entry area the north side of the building.

The basement, which currently has poor heating and ventilation, will be renovated with modern heating, cooling and air filtration systems with slightly less space for the Friends of the Library, but much nicer — all the better to hold what locals say is the longest running book sale in the state.

In the end, the building renovation, which was designed by Vermont Integrated Architecture P.C. of Middlebury and construction estimates were provided by Naylor & Breen Builders Inc. of Brandon, will have:

Wisely, the project is being calculated on two levels: a minimum need and an optimum need. Such planning allows the project to proceed if the capital campaign doesn’t meet 100% of its optimum target by the due date. The minimum overall target is $1,896,262, compared to the optimum target of $2,202,245.

During the construction, the library would move the bulk of its books and activities to the basement of the Brandon Town Hall.

In recalling the genesis of the project — from wanting to install a lift to reach all four levels of the building — to its current scope, Roberts said the expansion of the 4,200-square-foot building was realistic and practical.

“We went from simply wanting to build an elevator shaft on the back of the building to this full expansion and renovation because we needed to,” he said. “We learned the building is covered in asbestos and with lead paint. Then the fire marshal came in, and that added to the costs. We have historic windows in the front, and those have to be restored, and we have to be ADA compliant.”

While it all adds up, it’s the right thing to do, Roberts said.

“It’s a beautiful building and it has a lot of community love… But the reason I’m doing this is because I believe in Molly and her staff and the library’s mission. Molly does a fantastic job and I believe this effort will make the library even better able to serve the public under Molly’s leadership and her team’s hard work.”

Roberts noted that the Brandon library operates very frugally, and serves its community at a cost of about $16 per capita, compared to a bigger library like the Ilsley in Middlebury which spends about $50-$60 per capita.

In turn, Kennedy said the fundraising effort would still have been in the talking stages without Roberts’ force of energy and dedication.

“He’s taken this on as a second job,” she said, in awe of his commitment. “Without David, to get where we are simply wouldn’t be possible.”