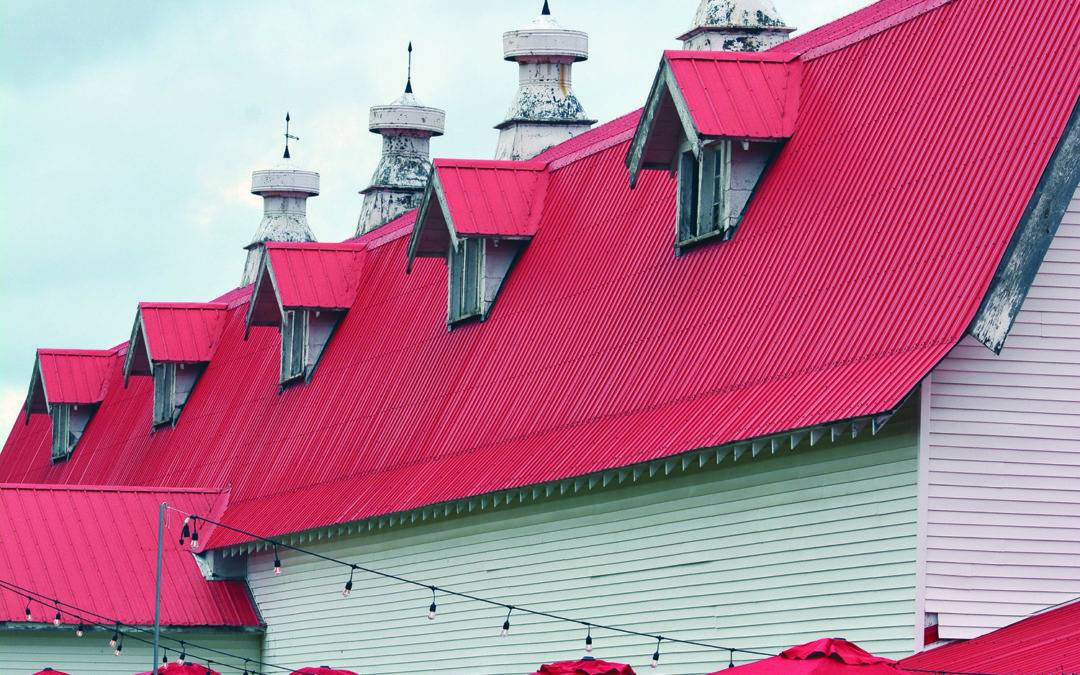 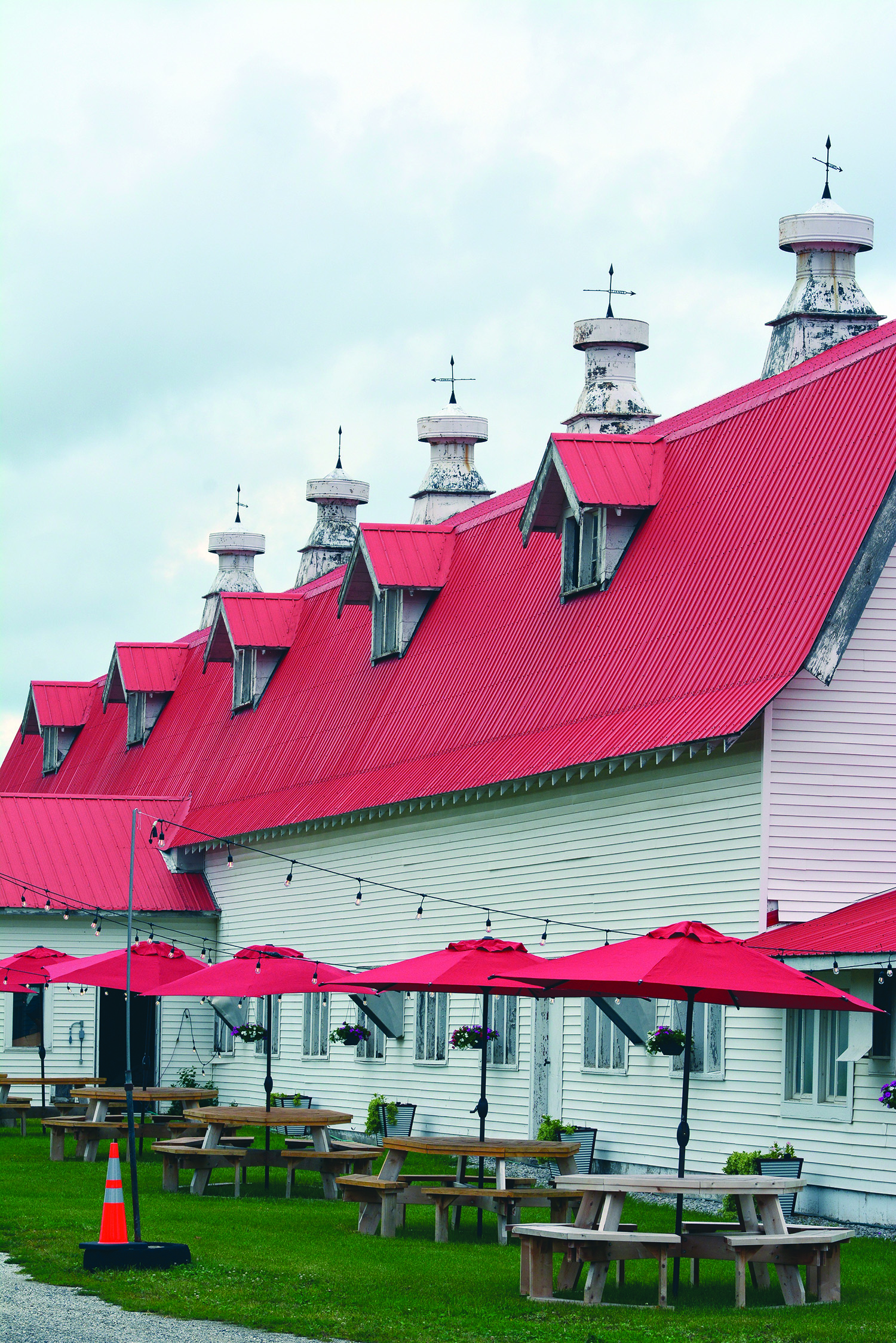 THE ICONIC RED-roofed barns of the former Nordic Farm off Route 7 in Charlotte are now home to Earthkeep Farmcommon. The 600-acre former dairy farm is being repurposed into a diversified hub where several smaller famers and producers as well as entrepreneurs, educators, and innovators are building a sustainable future for Vermont’s large farm parcels.

CHARLOTTE, Vt. — A multi-faceted collective now occupying the former Nordic Farm dairy property in Charlotte demands the attention of three communities interested in the future of foods and farms in Vermont:

Earthkeep Farmcommon, as it has been named, is an incubator for farmers and producers looking for a foothold in a crowded and crumbling landscape, providing a supportive community with shared resources that can reduce individual burden. It is also a research and development incubator, pursuing ambitious goals to realize new financial models that would equalize wealth distribution by rewarding land stewards who can deliver measurable ecological benefits that mitigate climate change.

Will Raap is a tenacious Vermont entrepreneur with a visionary gift toward optimism. Best known as the founder of Gardener’s Supply company, Raap has spent decades trying to strengthen the connection between communities and sustainable, local food.

In the mid-’80s Will saw potential in a 700-acre floodplain of abandoned farmland in Burlington. In this marginalized property he not only moved his business, but used it to build the Intervale Center, which has become a thriving non-profit working to build stronger connections with local food systems. He and his partners built the first organic farm incubator in the United States and helped fund their initiatives by crafting the first CSA and Food Hub programs. Their regenerative approach has been fueled by the largest municipal composting project in Vermont, solving the problem of what to do with municipal and commercial waste while organically sustaining crop production and farms in the Intervale.

Land that was cast off and abandoned 35 years ago has been transformed back into a sustainably productive and vibrant landscape of diverse ecology visited by recreationalists and citizens committed to having a closer relationship with their food and the land that produced it.

Vermont’s large conventional dairy operations are facing a critical dilemma: with profitability constricted, they can either increase their productivity and try to squeeze even more out of their resources, or they can fold.

For those that choose the former, their land is heavily taxed by higher production demands to keep up with larger herds and the perceived need to turn every inch of land to farming, however marginal. Aggressive tilling and the use of fertilizers, pesticides and hormones deplete natural soil health and demand a reliance on chemical and mechanical innovation. Soil degradation has led to damaging consequences for our water supplies due to toxic agricultural runoff. Poor handling of manure and fertilizers contributes catastrophically to greenhouse gas emissions. Loss of biodiversity and ecological balance on farmland further exacerbates the problem.

Yet Vermont farms struggle to compete with mega-farms in the Midwest and are losing ground rapidly.

The alternative is perhaps even more bleak. Roughly 1,000 large Vermont farms are operating within strict conservation easements that prevent the land being repurposed for anything other than farming. Even if a farm folds or wants to divide their assets and downsize, they face impenetrable barriers that too frequently prevent any other future than fallow and valueless land stripped of ecological biodiversity, and abandoned infrastructure left to collapse.

For some, this is simply a devastating story of loss. For others, out of this picture of desperation has come a glimpse into what else may be possible.

A STEADY EYE ON THE FUTURE

It is no wonder that such a tenacious problem-solver as Raap would turn his gaze to the conundrum faced by dairy farmers in today’s Vermont landscape.

In late 2021, after a lengthy process of negotiations, Raap and a group of fellow investors purchased Nordic Farm, a 600-acre former dairy operation off Route 7 in Charlotte. The plot has been rebranded Earthkeep Farmcommon, and Raap and his team plan to carry out a vision to return it to a diversified and sustainable model of farming while pursuing nontraditional revenue streams for systems that reverse climate change.

Their mission is ambitious: “Strengthening the imperative bond between farming, economy and nature. From the ground up and for our common good.”

Earthkeep Farmers Coalition LLC was established as a collective of about a dozen small-scale farmers and producers working symbiotically on the farm. Jacob Keszey, the Earthkeep Farmcommon Farm and Land Director, responsible in part for maintaining a strong mix of farming entrepreneurs who share a commitment to the land and environment, while offering a diverse service and marketable product.

Among the producers are fruit and vegetable farmers as well as Clayton Floral, offering flowers and decorative foliage; House of Fermentology/FOAM Brewers, producing ale blended and aged with botanicals and honey; and Sweet Sound Aquaculture Shrimp. These growers and producers keep the land and buildings at Earthkeep active while employing sustainable farming practices and actively seeking ways to repair ecologically sensitive areas that naturally help to reduce the negative impacts of farming on the environment.

One of the two primary barns of Nordic Farm had been converted to a granary prior to Raap’s acquisition of the farm. It has found yet another life as the Vermont Grain Co-op, sustaining an operation supporting not just growing of the grains, but offering all services from malting to milling, flaking, roasting, smoking and blending top-quality barley, rye, wheat and triticale. These raw local materials are then converted on site to malt (used for various beverages), flour, bread and more. Nitty Gritty Grain and Slowfire Bakery are two of the granary’s primary partners in this endeavor.

Raap, Keszey and Robin Jeffers (COO of the Earthkeep Farmers Collective and chair of the Regenerative Ag Center) have navigated through the murky waters of agricultural designations and easement codes to determine that their collective can serve as a farming “entity,” recognized by the state agricultural laws as equivalent to a single farmer. As long as they collectively produce a minimum of 51% of their sold products on the farm itself, they are within the parameters set up by agricultural easements. The collective can then aggregate a wider ecosystem of nearby farms where additional crops are currently thriving, offering a processing/production facility as an alternative option for partnership within the collective. This hybrid model appeals to farmers who lack the infrastructure or capital to host their own facility for processing. Shared processing services enable small and medium-size farmers to bypass costs associated with operating an independent farm, while maintaining more control of their final marketed product.

Keszey, who also operates an independent beef farm locally, explains: “People ask if we think we can really afford to operate within the collective model Earthkeep proposes. I answer that we can’t afford not to.”

Optimistic plans at Earthkeep involve converting the second main barn to a year-round marketplace where farmers would be able to sell directly to consumers. It would also house a large educational space and co-working space where they could house workshops, seminars, training sessions and community engagement events.

Jeffers and the non-profit team at Earthkeep are simultaneously working on exploring innovative channels for clean energy production and mechanisms for reducing greenhouse gas emissions. The collective has identified 20-30 acres of viable land to site a large solar array, which they see as a critical intervention necessary on agricultural sites.

“In order to have any kind of a measurable impact on climate change we are going to need to convert 2,000-3,000 acres per year to solar,” Raap said. “The most feasible way to do that is with agro-voltaics.”

Among the solar panels the team plans to interplant shrubs that grow elderberry and other perennials and botanicals. Shrubland proves an incredibly powerful tool for carbon sequestration as well as providing habitat for species that have struggled to find suitable nesting sites in today’s agricultural landscape. At Earthkeep, the fruits, berries and florals are also harvested and used by the House of Fermentology producers to ferment into ales or for other value-added products such as jams, tinctures and salves.

Jeffers, Keszey and Raap have joined forces with other organizations in Vermont to evaluate a process through which to establish a marketplace that will fund the climate-positive work being pursued by their agricultural ventures.

Financing is coming from a few primary channels.

Grants along with public and private donations to pursue environmental research and development are critical initial assets that Jeffers has brought to Earthkeep Farmcommon to fund the purchase of the farm and infrastructure improvements to realize the vision.

The federal government is also actively and rapidly crafting policies that can help redeem its overall negative impact on climate change. The USDA has developed “Partnerships for Climate-Smart Commodities” with grant money totaling $1 billion for pilot projects that create market opportunities for commodities produced using climate-smart practices in 2022. Jeffers is writing grants seeking millions of dollars for Earthkeep to realize some of these funds until other market-driven exchanges are more viable.

But perhaps their most novel pursuit is the groundwork to build a model in which Vermont’s progressive and diversified farms could aggregate into natural asset companies and be valued for the work they do to mitigate climate change.

They’re calling this “The Big Idea,” and if successful, it could inspire a fundamental shift in the equation faced by farmers.

The end goal is to obtain payments for “ecosystem services” through a public marketplace traded through the New York Stock Exchange. The marketplace is being crafted to reward stewards of healthy wetlands, forests and farmland who work to sequester carbon, enhance biodiversity and maintain clean water sources. According to the New York Stock Exchange, Natural Asset Companies, or NACs, “will capture the intrinsic and productive value of nature and provide a store of value based on the vital assets that underpin our entire economy and make life on earth possible.”

Big tracks of farmland can be aggregated into collectives that reach the scale that could be traded, Raap explains. It currently requires 1,000 acres of land to become a viable entity for trading publicly, which Raap and the Earthkeep collective see as a reachable goal. Raap believes that if farmers can be paid for doing the “right thing” to their land and landscape, they will, especially in Vermont. With roughly 600,000 acres of farmland in Vermont, the Earthkeep team believes they could set up the model through which regional farms could aggregate into collectives without losing the independent and localized farming system so treasured in the Green Mountain State.

This model would effectively develop a financially viable path for small farmers to employ sustainable practices on their farms.

“Vermont is well-positioned to be the leader in this field,” Keszey believes, “We have relatively well-informed consumers who choose local and sustainable food options whenever possible.” And if systems like those being developed at Earthkeep can make it more possible for those choices to become mainstream and easy to make for both farmers and consumers, it will naturally be adopted as a model elsewhere too.

“I believe that the financial market will naturally see the value in Natural Asset Companies and we’ll be moving in these directions before long,” Raap says, “but I don’t think we have the time to wait. Climate change is urgent, so we’re working on every avenue possible, NOW.”