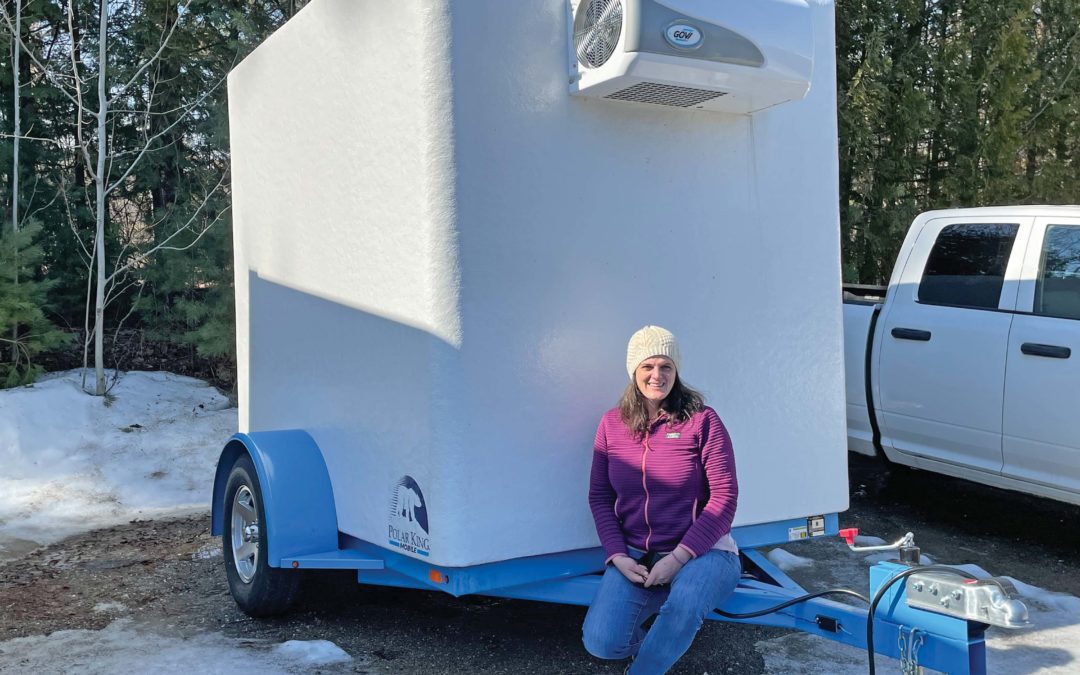 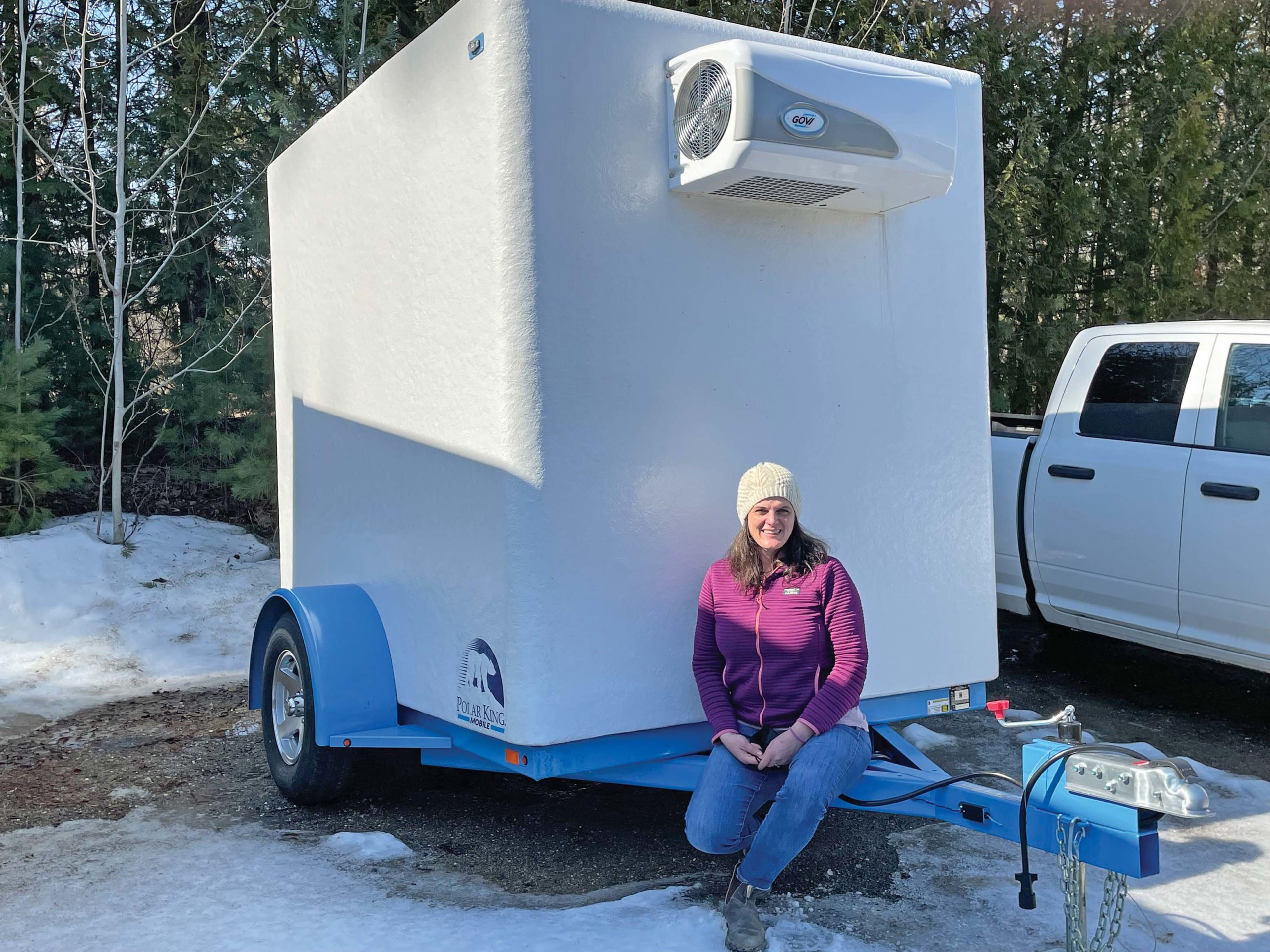 MIDDLEBURY — For decades, area low-income residents have made regular trips to the food shelf run by Helping Overcome Poverty’s Effects (HOPE) at 282 Boardman St. in Middlebury when their own pantries were exhausted.

Now, thanks to a grant-funded refrigerator on wheels, HOPE will increasingly be able to bring food to hungry, transportation-challenged people — especially those in the rural fringes of the county who are homebound, frail and elderly.

And that’s not all. The 144-cubic-foot (four feet by six feet) mobile refrigeration unit will also provide HOPE with extra, temporary storage space for food that must stay cold. This will come in super handy during the nonprofit’s gleaning efforts on area farms during the warmer months to ensure the harvest stays fresher longer.

It’s on a trailer that can be hitched to the HOPE pickup truck and is endowed with a generator that ensures its cargo is maintained at a consistent temperature.

HOPE is believed to be the only anti-poverty organization in the state currently using a mobile refrigeration unit to get fresh food to the masses.

The mobile refrigeration unit has been on HOPE’s wish list for several years, and became a priority when the coronavirus hit the county two years ago.

“Early in the pandemic, people were starting to lose jobs, and we became concerned they wouldn’t have food,” recalled HOPE Executive Director Jeanne Montross. “Food prices were rising. We wanted to look at providing food in underserved areas. People can’t always come to us, so we want to come to them. It just makes sense.”

“They had refrigerators once we got there,” Montross said, noting the HOPE food — including  meat, milk, cheese and fresh produce — had to be taken to the towns in big, bulky coolers.

She said the Hancock/Granville events proved popular, and have led to those communities taking on food security initiatives. At the same time, HOPE officials want to expand the reach of their charitable food efforts. So Montross and her colleagues decided a mobile refrigeration trailer would be the proper method for exporting food shelf commodities. They picked a Polar King model costing $28,000.

A food security organization called Salvation Farms in Morrisville secured two separate grants to cover costs of HOPE’s new refrigeration unit; one from the Hannaford Charitable Food Foundation, and the other from a special environmental project fund bankrolled by a fine paid by the Chittenden Solid Waste Management District after it was determined to have improperly dumped glass during the spring of 2018. The Vermont Attorney General’s Office gave the Salvation Farms oversight over the environmental project fund.

Salvation Farms is a backbone of the Vermont Gleaning Collective, or VGC. Based in Morrisville, VGC is an association of organizations throughout the state that glean quality crops from farms after harvest — crops that would otherwise go to waste. This produce is then distributed to sites that nourish vulnerable people. HOPE is one of six listed members of the VGC, which provides training and technical support for organizations and volunteers eager to glean.

“We’re working toward a future where local communities are increasingly fed by local farms,” said Theresa Snow, executive director of the Salvation Farms. “We want to use Vermont’s surplus farm food to build shorter supply chains and a more resilient local food system.”

Unfortunately, the price of refrigeration trailers went up during the pandemic, forcing HOPE to suspend its purchase. But the organization finally accepted delivery of the trailer two weeks ago. Montross and Freund will nail down regular delivery locations in underserved communities — perhaps at a local school or town clerk’s office — during a set day and timeframe so consumers can build it into their routines. The southeastern and northwestern regions of the county seem best suited for the new food shelf on wheels, they said.

The new trailer comes at a time when food is becoming more expensive and scarce due to inflation and pent-up demand during the pandemic. Montross noted HOPE used to be able to count on more than 50 cases of food each month through the Vermont Food Bank. This month, HOPE will receive only 16 cases, she said.

“They don’t have a lot… and they’re serving the entire state,” Montross said.

That means charitable agencies like HOPE have to purchase more food through stores, often at a higher price.

“Prices have gone up and packaging sizes have gotten smaller, so the food isn’t going as far,” she explained.

People can deliver food or financial donations to HOPE weekdays between 9 a.m. and 4 p.m. Please call in advance (388-3608) if you’re making a large donation delivery.

John Fallon is longtime coordinator of the HOPE food shelf. He’s noticed an uptick in activity, which has led to depleted inventory.

“The past few months, the numbers have creeped up a bit,” Fallon said last Thursday, adding people are feeling more comfortable visiting the food shelf now that COVID-19 case numbers are down.

Freund is anxious to see the impact the trailer will have on HOPE’s gleaning program, which currently involves more than 30 farmers and orchardists. More than 38,000 pounds of surplus food were culled from those farms last year.

“The objective is to get healthy food to people who need it, and also to work toward a more equitable and sustainable food system that promotes local food production, while reducing waste on local farms,” Freund said.

Snow believes refrigeration trailers could become an important tool for nonprofits in the statewide gleaning efforts.

“To be able to take that field heat out of the crop before you take it and store it somewhere else is certainly an advantage, in that they’ll be able to keep their food potentially at a higher quality longer with that capacity,” she said.