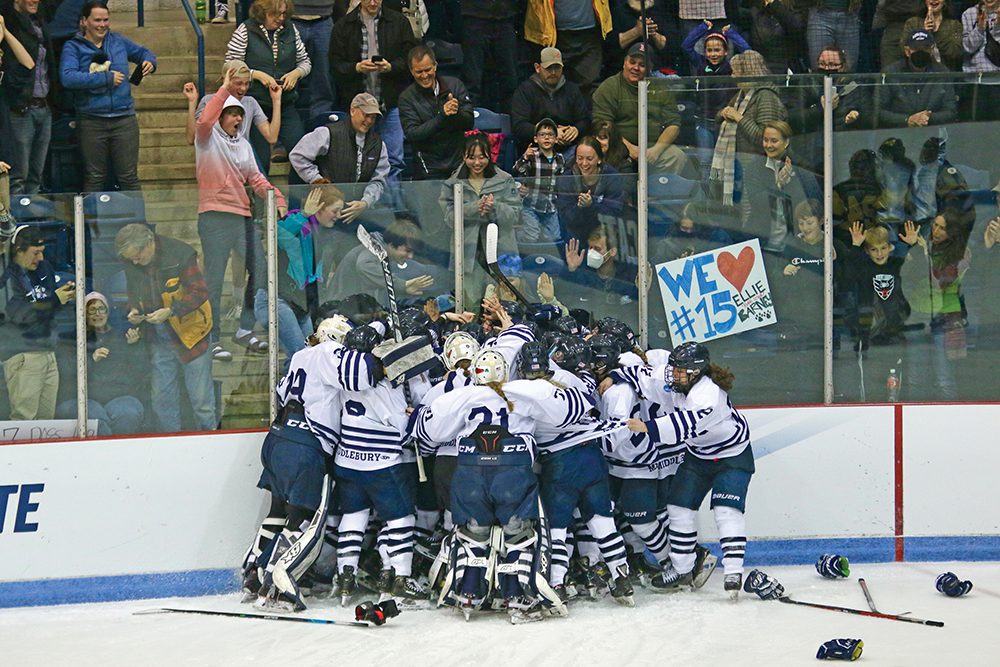 MIDDLEBURY — After the cheers stopped echoing off the Kenyon Arena rafters on Saturday, Middlebury College Women’s Hockey Coach Bill Mandigo sat in front of the postgame press conference microphone with four Panthers and described what had just happened as an “emotional roller coaster.”

Officials ruled the Panthers had lost a 2-1 lead in the NCAA Division III final when Gustavus Adolphus scored with one-tenth of a second on the clock. Mandigo and assistant coach Ashley Salerno had hugged each other, thinking the game was over before the puck went into the net.

The Panther players had rushed to congratulate freshman goalie Sophia Merageas. Most of the near-capacity crowd was on its feet, urging them on.

But the referees were reviewing the play. Finally they correctly ruled Golden Gustie Molly McHugh had flicked in a rebound before time expired. 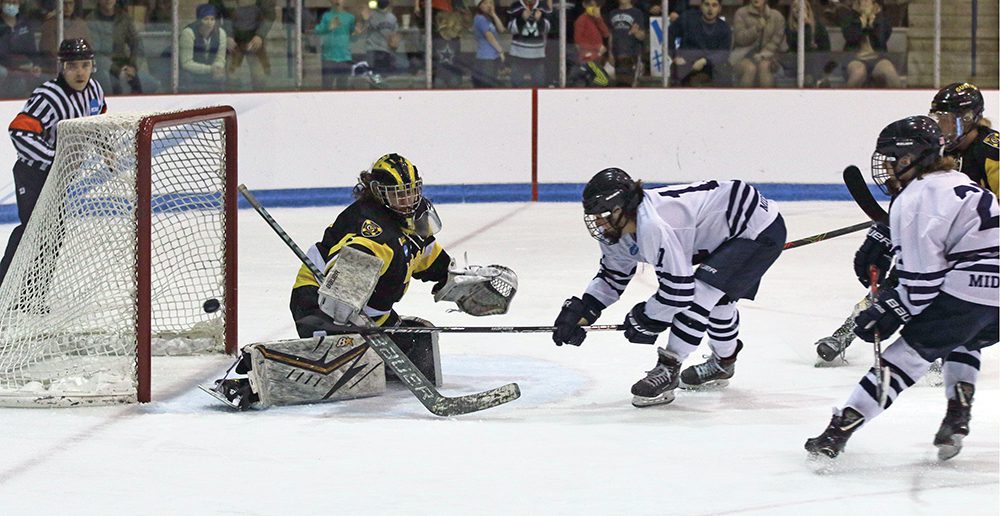 The Gusties scored while skating with a 6-on-4 advantage after pulling goalie Katie McCoy and after the officials had whistled senior Panther defender Eva Hendrikson for a delay-of-game penalty — they ruled she closed her glove too long on a puck that popped into the air.

So it was now gut-check time for a team that saw an apparent NCAA championship and perfect 27-0 season, the first in NCAA D-II women’s hockey history, snatched away.

In regulation time, the 25-4-1 Gusties, coming off a 5-1 dismantling of Plattsburgh in a Friday semifinal, had outshot the Panthers, 31-22. Those numbers were boosted by five Gustie power plays to Middlebury’s one, but Adolphus looked like the best team the Panthers saw all season. 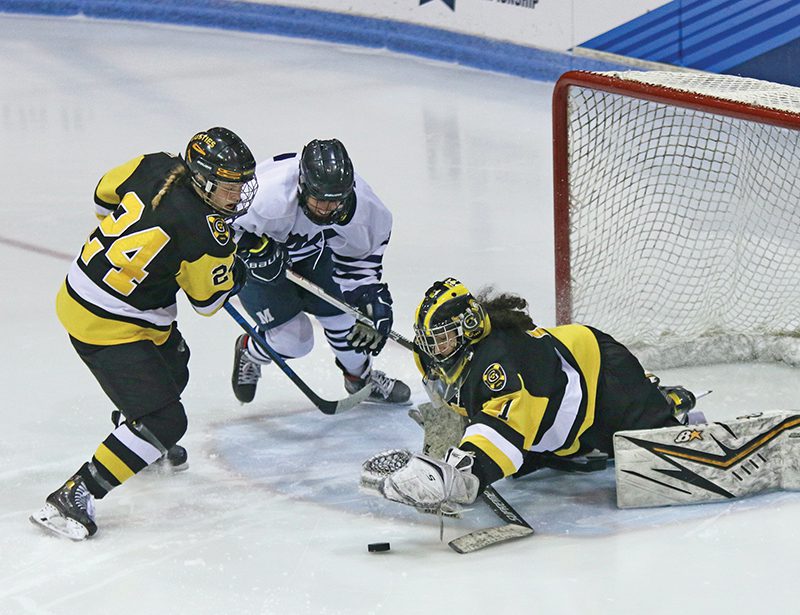 But Middlebury dominated overtime, outshooting the Gusties, 7-0. The seventh shot came from senior Ellie Barney with 13:17 gone. It went in to give the Panthers a 3-2 win, the program’s sixth national title and first in 16 years, and their historic perfect record.

The play started, fittingly, with a brilliant pass from Hendrikson. From the right defensive circle Hendrikson spotted Barney cutting diagonally toward the Gustie blue line. The pass caught Barney in full stride, with a Gustie defender glued to her.

Barney slid the puck to her left and levered the Gustie to her right, creating a clear lane to goal through the left circle. The Gustie goalie stopped her first bid from about eight feet, but gave up a rebound to the top of the crease. Barney made no mistake, one-timing the puck into the left side of the net. A joyful white and blue mob quickly swarmed her.

Before that joy came the ups of senior captain Madie Leidt’s go-ahead goal with 2:47 to go in the final period, and the downs of losing the apparent victory.

“You talk about a swing of emotions,” Mandigo said. “And all of a sudden it’s a goal, and we have to go back into the locker room.”

Mandigo then talked about the team’s toughness.

“I’ve used the word resilient with these players all year long,” he said. “You lose the national championship with one-tenth of a second left, and you come out and play your best hockey in overtime. And that’s what they did.”

The Panther addressed their team’s frame of mind after the unlikely chain of events, which also included the officials’ decision to add two seconds to the clock: It was changed to read 18.2 seconds from 16.2 seconds left in regulation after the Gusties complained.

Panther freshman goalie Sophia Merageas, named the tournament’s outstanding player after making 29 saves on Saturday, said the Panthers were already looking ahead before the tying goal was made official.

“There were a few teammates coming up to me and saying don’t worry, either way it goes we’ll get another one,” Merageas said. “We’re going to come back stronger.” 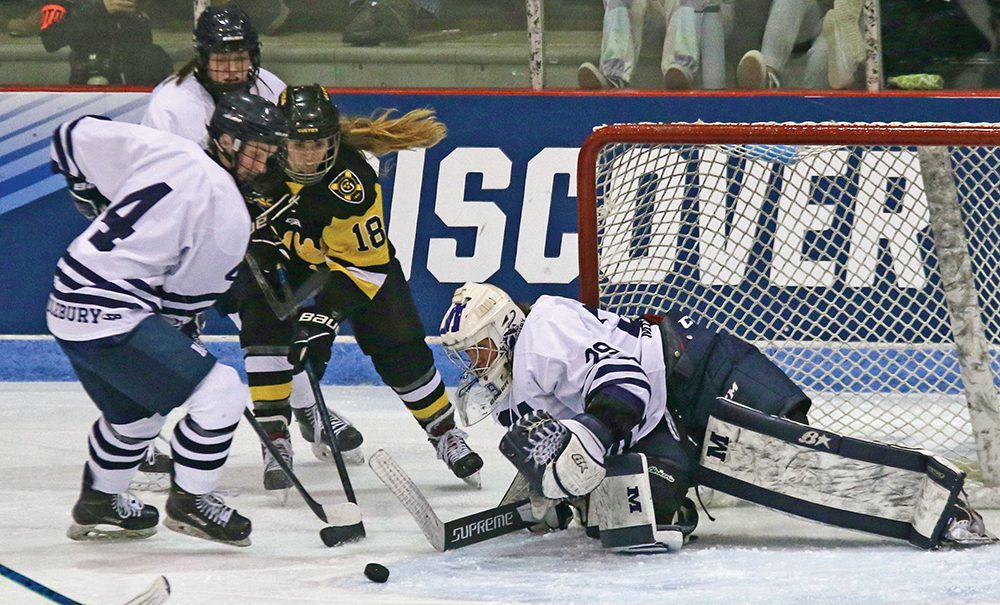 PANTHER FRESHMAN GOALIE Sophia Merageas dives on a loose puck in the crease on Saturday. Merageas made 29 saves in the NCAA D-III women’s hockey final, won by the host Panthers, and was named the tournament’s outstanding player.
Independent photo/Steve James

Barney talked about Leidt, another all-tournament pick, setting the tone.

“Madie is an amazing leader,” Barney said. “There was a moment in the huddle when she was saying, ‘It doesn’t matter what the outcome of this is. We’re going to get another one.’”

In the first period Adolphus showed it would give Middlebury a game with aggressive forechecking and high-pressure defense. The Gusties did not allow the Panther defenders to tee up shots or make easy passes in the attacking end, a tactic that has recently been productive for the home team.

As the Panthers began to settle in they were whistled for back-to-back penalties. The first they killed effectively. On the second, Letterie anticipated a point-to-point pass, deflecting it to center ice. She won the race to the puck, skated in on McCoy, and ripped a forehand from close range that trickled home off the goalie’s glove with 6:16 remaining in the first period.

Late in the period Merageas shouldered away Kaitlyn Holland’s rising shot from the right side, and Middlebury led after one period.

Tight defense ruled the second period, at least until the Gusties were awarded a power play at 12:02. At 12:30 Clara Billings one-timed a short shot inside the right post after taking a feed from behind and to the left of the net from Emily Olson.

Soon afterward Merageas made a tough pad save on a Hailey Holland bid. After an ineffective Panther power play, the Gusties went on another power play with 52 seconds left in the period. Panther defender CeCe Ziegler made a key block, and Merageas stopped Kristina Press from the slot.

Both teams had chances in the third period before Leidt gave the Panthers the lead. Merageas stopped arguably the best chance, denying Press on a two-on-one with eight minutes to go. 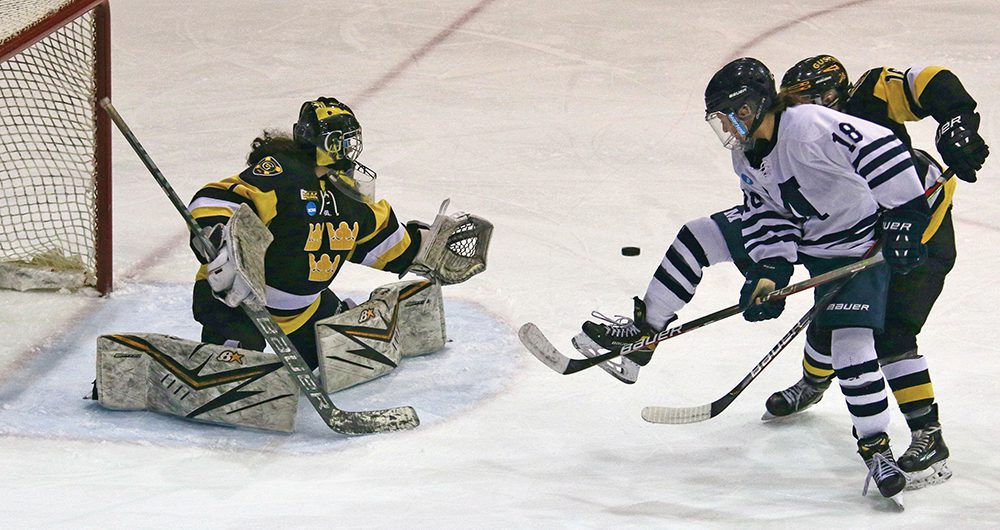 Leidt’s goal with 2:47 to go came after Letterie sent Katie Hargrave into the Gustie end. Hargrave unleashed a forehand from between the circles that McCoy gloved, but didn’t hold. Leidt swooped in from the right, picked up the puck at the top of the crease, and backhanded it home to the left of the goalie.
Then came the final drama: The faceoff with 18, not 16 seconds, left. A late tie-up in the right corner from which the Gusties worked the puck loose to behind the net. A Hailey Holland wraparound at the left post that hit Merageas’ stick and bounced into the crease. And McHugh waiting to flip the puck home.

And the Panthers and Barney waiting to pounce in overtime. 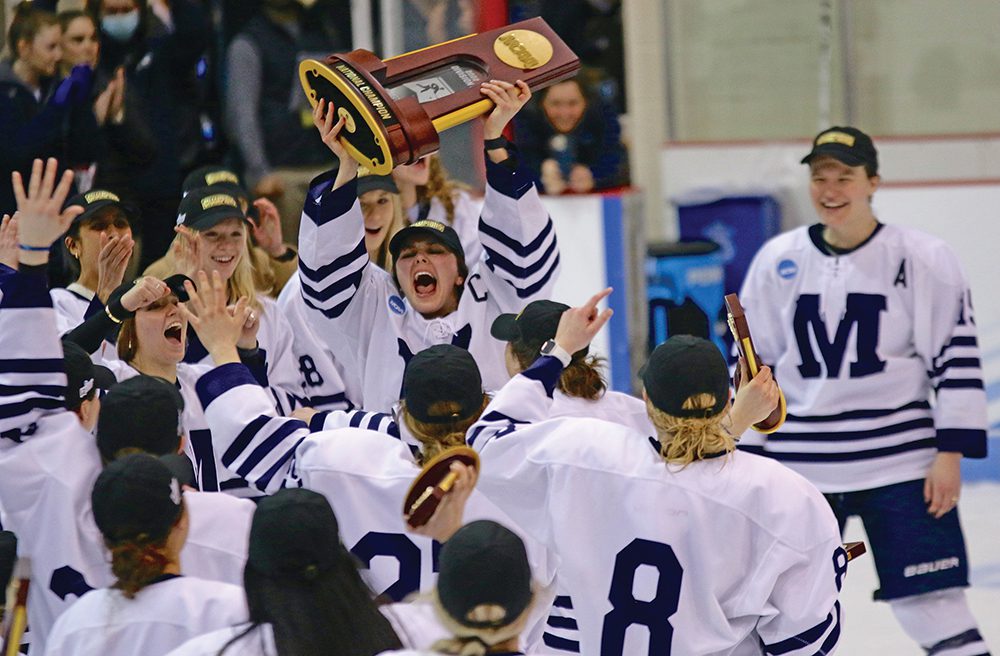 “Watching Ellie score that goal, everything you work for, not just the past four years, but your entire hockey career, it kind of comes to fruition,” Leidt said. “Not many teams get to say they’re 27-0-0, and we are. And it’s just an incredible feeling.”

Barney agreed scoring that goal felt amazing, and explained why.

“It’s really special, but it’s even more special to celebrate with this group of girls who I love so, so much,” she said.

Mandigo, earning his 625th win, had the last word after being asked how this team ranked among his 33 at Middlebury.

How did the Panthers get to the championship game? Read about the exciting NCAA semifinal game vs. Elmira by clicking here.