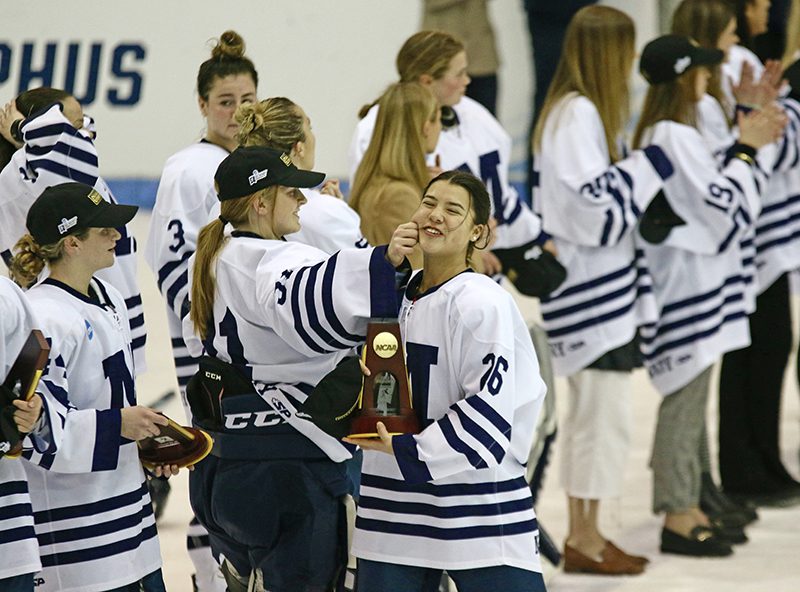 MIDDLEBURY — In Friday’s NCAA Division III women’s hockey tournament semifinal, No. 3 Elmira (25-3-1) battled the Panthers in Middlebury’s 3-2 victory for the second time this season: Middlebury defeated the Soaring Eagles, 2-1, in November in Plattsburgh.

The Panthers on Friday outshot Elmira, 32-18, overall, before a crowd of well more than 1,000 at Chip Kenyon Arena. But Middlebury goalie Sophia Merageas had to make seven of her 16 saves in the scoreless first period, including an outstanding kick stop with her left skate on Elmira’s Claire Elfring just past the midway mark.

Panther Coach Bill Mandigo said in the postgame press conference the Panthers might have felt nerves in the first 20 minutes, but also credited Elmira for being a fast, smart and well-coached team.

The Panthers kicked into gear in the second period and took the lead at 7:10 on Cat Appleyard’s power-play goal. She took a short Katie Hargrave pass from the right and whipped a 10-foot shot inside the left post.

Elmira’s Eliza Beaudin answered a minute later. Emma Crocker won the puck in the corner and fed Beaudin at the bottom of the right circle, and her one-timer through traffic beat Merageas near side.

Panther Kylie Quinlan made it 2-1 with 7:16 to go in the period. Molly MacQueen won the puck in the left corner and fed Quinlan open cutting toward the net. Quinlan faked a near-side shot, skated through the slot, and slid the puck inside the far post.

Madie Leidt made it 3-1 with 8:13 gone in the third period. Hargrave and Jenna Letterie worked the puck loose behind the Elmira net, and Letterie skated out to the right of the net and fed Leidt on the doorstep. Leidt one-timed the puck inside the left post.

Soaring Eagle Holley Riva charged the net and cashed in a centering pass from Erika Goleniak to make it 3-2 with 4:14 to go.

But the Panthers put the clamps on Elmira the rest of the way, including not allowing a shot in the final 1:28 with Elmira goalie Leonie-Louise Kuehberger (29 saves) pulled for an extra skater.

Afterward, Appleyard addressed what it was like to have so many fans in Kenyon Arena this weekend.

“The crowd has really been amazing. Personally, every time I hear them I feel like I’ve got to go harder, I’ve got to go faster to the puck,” Appleyard said. “We’re lucky that Middlebury, the school and the community, has come out to support us. It really has helped us.”