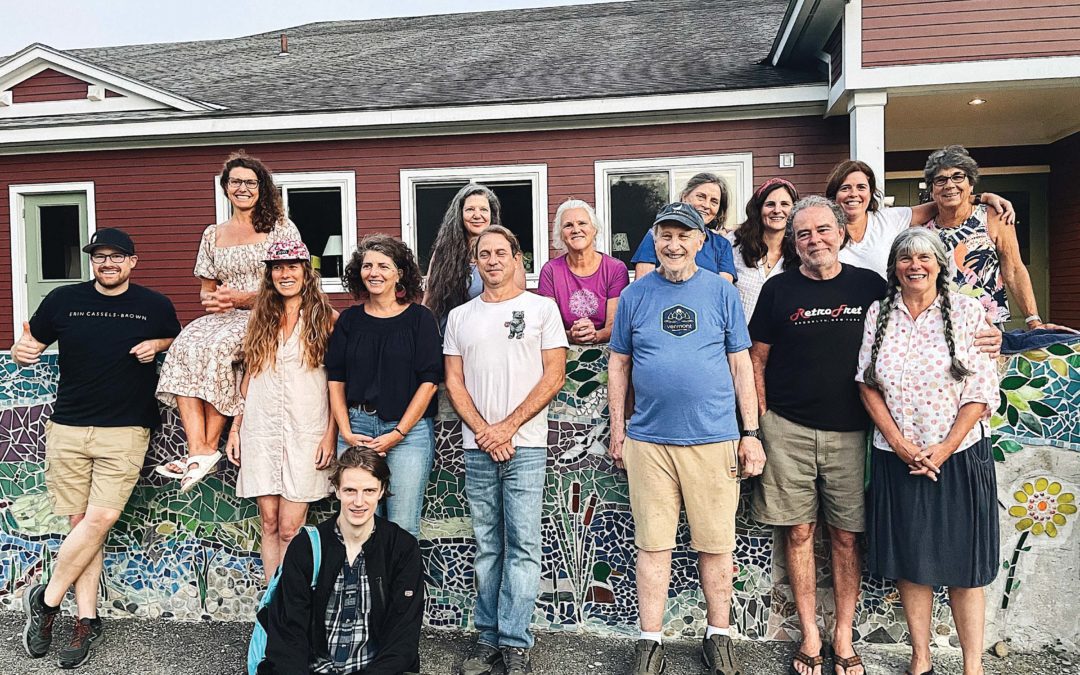 MEMBERS OF SAVE Community Schools gather in front of the Lincoln Community School this past August as they await the results of a townwide vote on withdrawing from the Mount Abraham Unified School District. Facing possible school closure, Lincoln voters approved the plan by a 3-to-1 margin, but it must be ratified by the district’s other four towns on March 1 before it can proceed. Photo courtesy of Save Community Schools
By Christopher Ross

LINCOLN — After a six-month wait, the Lincoln voters who overwhelmingly approved a proposal to withdraw from the Mount Abraham Unified School District are approaching the next hurdle in the process: ratification by the other four MAUSD towns.

Voters in Bristol, Monkton, New Haven and Starksboro have been asked to approve Lincoln’s exit plan on Town Meeting Day, March 1. If they do, Lincoln may then seek conditional approval from the Vermont State Board of Education. But if even one MAUSD town rejects the proposal, Lincoln’s withdrawal bid is at an end.

“This was a very, very difficult decision, not lightly arrived at by any means,” said James Warnock of Save Community Schools, the group spearheading the campaign, during its Feb. 17 virtual information meeting. “We went around and around, endless meetings, debating all the possible options, looking at first Lincoln being on the chopping block, then Lincoln being repurposed with no opportunity to honor the articles of agreement that would have allowed us to vote before our school was closed, and finally making the difficult decision to move forward in withdrawing.”

Save Community Schools (SCS), a group of parents and community members that has seen significant support from the town selectboard, launched Lincoln’s exit campaign last summer, believing it was the only way to preserve the Lincoln Community School.

Like most other Vermont school districts, the MAUSD has struggled for years with declining enrollment and rising education costs. In 2020, the school board directed Superintendent Patrick Reen to come up with a long-term solution, which he presented that December. In its first phase, the plan called for “repurposing” — essentially terminating the elementary programs — at three district schools, including LCS, which has suffered a sharp decline in enrollment in recent years. Phase two of the plan called for merging with the ANWSD.

The district proposal — and the ANWSD-MAUSD Merger Study Committee that formed the following spring — was a significant driver in SCS’s decision to launch a withdrawal campaign, the group said during its Feb. 17 presentation.

SCS also cited Act 46 — the 2015 law that consolidated school district governance in Vermont and provided the framework for creating what would become the MAUSD — which they said has failed to benefit Lincoln in any meaningful way, while at the same time diminishing the town’s local control of its school.

More recently, the group has raised concerns about various legislative proposals to amend or rewrite parts of Act 46, including one by the Vermont State Board of Education (SBE) that would replace the legal route to withdrawal pursued by Lincoln and other towns, such as Ripton, with a vastly more complicated process that by many accounts would be impossible to follow.

If Lincoln’s withdrawal plan is ratified, the future of LCS would be somewhat uncertain, at least at first.

The town would have to submit its ratified plan to the SBE, whose recent actions and comments suggest it has little interest in facilitating the breakup of Act 46 school districts.

If Lincoln does win conditional approval from the state, the town would then elect its own school board, develop a financial “exit plan” from the MAUSD, and begin the arduous task of finding or establishing a supervisory union (SU) or other governance structure that would allow it to provide a host of legally required educational services, some of which — such as special education and transportation — are far too costly to be shouldered by a town of 1,300 people.

As it stands now, assuming it checks every box and receives final approval from the SBE, Lincoln could be operating its own public elementary school by July 1, 2023.

As previously reported in the Independent, Lincoln is working with the town of Ripton, which recently withdrew from the Addison Central School District, to explore the formation of a new SU for administrative cost-sharing.

Lincoln and Ripton officials are modeling financial information for a two-town SU but have publicly indicated they would welcome collaborations with other towns, should withdrawal campaigns emerge elsewhere, such as in Starksboro.

Whether the two towns will have enough resources between them to provide the required SU services — and whether the SBE would approve such a partnership — remains to be seen, but supporters have expressed optimism about the creative possibilities such a partnership would create.

Citing a September 2021 presentation by Reen and MAUSD Business Manager Floyd Davison, SCS predicted Lincoln’s withdrawal would have a negligible effect on educational tax rates in the remaining four towns.

This is assuming that roughly 85% of Lincoln secondary students pay tuition to attend Mount Abe (or whatever combination of schools a potential merger with ANWSD might produce).

But this is not a fair assumption, says MAUSD board (and Merger Study Committee) member Dave Sharpe of Bristol.

Sharpe, who represented Bristol and its neighbors for 16 years in the Vermont House, and as chair of its Education Committee was instrumental in developing Act 46, happens to be one of the most vocal opponents of school closure in the MAUSD.

But he’s not convinced 85% of Lincoln’s secondary students would tuition to Bristol ($19,357 for the current school year) or Vergennes ($18,514) if they also had to option to attend, say, Champlain Valley Union High School in nearby Hinesburg ($16,432).

In a Feb. 3 letter to the Independent, Sharpe laid out a number of school choice options Lincoln residents would have under current statutes and pointed out fewer Lincoln students at Mount Abe would mean less tax capacity in the district — which would result in higher taxes for all.

“In the end, I believe that it is better for Lincoln’s children and the children in the rest of the communities in the Mt. Abe school district for us to remain a single larger school district,” Sharpe wrote. “Economies of scale are real and the proposal for Lincoln, to either go it alone or in collaboration with Ripton, is bound to cost more, which will raise education taxes for everybody.”

SCS has disagreed with Sharpe’s assessment but acknowledges that any decisions about where Lincoln children would attend middle and high school would be left up to a newly elected Lincoln school board.

Sharpe’s MAUSD board colleague Kevin Hanson of Bristol is also unconvinced by some aspects of Lincoln’s withdrawal plan, but he came to the opposite conclusion.

“Let ’em go,” Hanson wrote in a Feb. 10 Front Porch Forum post, speaking on his own behalf and not as a member of the board. “And look to the future of a newly molded District as exciting. One that can address the needs of declining class sizes, particularly at the high school level. And with towns that are supportive of this transformation and the possibilities it holds for the future of our students.”

SCS concluded its Feb. 17 presentation by reflecting on a statement by the Vermont Agency of Education: “One of the strengths of Vermont’s education system lies in its rich diversity and the ability for each local school district to adapt its education program to local needs and desires.”

To that the group appended the following thought:

“SCS believes the best way to provide high quality education to meet local needs is to have LOCAL CONTROL.”