Panther hoop teams near playoffs, other Middlebury teams in action 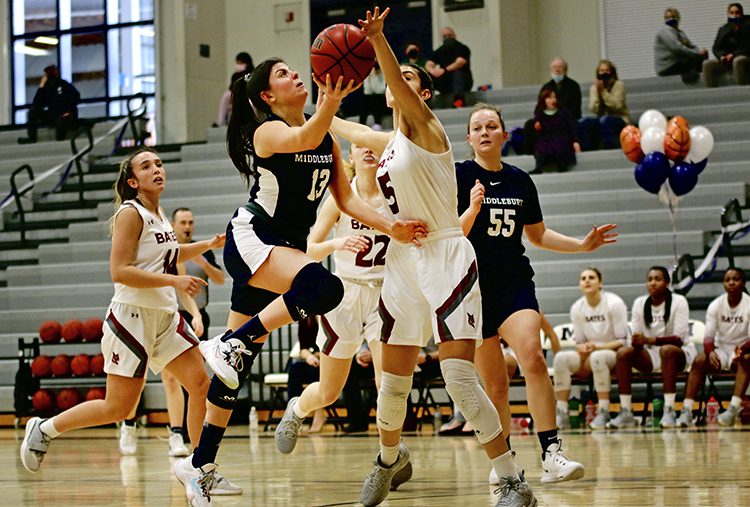 Panther hoop teams near playoffs, other Middlebury teams in action

MIDDLEBURY — The Middlebury College men’s and women’s basketball team each split two games this past weekend, efforts good enough for both to nail down top-four seeds for the NESCAC playoffs.

Both will host postseason games this coming weekend. Panther women’s basketball will play No. 5 Bates in Middlebury on Saturday at 2 p.m.; on Sunday at 2 p.m. the Panther men will play the winner of a Friday game between No. 6 Conn and No. 11 Bowdoin.

Normally only the top eight teams make the NESCAC hoop playoffs. But because of the many COVID-related postponements this winter, the league’s athletic directors agreed all teams should participate in the postseason.

Meanwhile, in other recent Middlebury College sports action, the men’s hockey team pulled off a road win, but remains at the back of the NESCAC pack and will open the playoffs on the road next weekend after closes the regular season this weekend, while the ski team saw a few strong individual results while finishing fourth at the Dartmouth Winter Carnival.

The undefeated Middlebury women’s hockey team was idle after the Panthers’ Sunday game at Williams was canceled after first being postponed from Friday. Their Saturday home game against the Ephs was postponed until Tuesday. 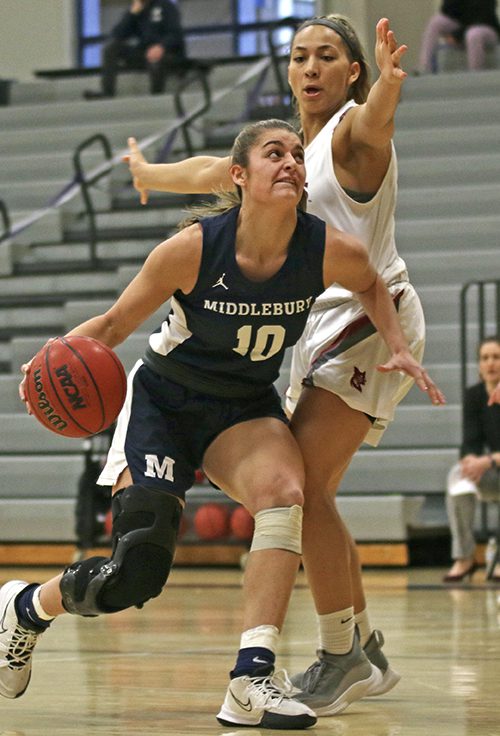 PANTHER FORWARD BETHANY Lucey drives toward the lane and eyes the basket during Saturday’s victory over Bates by the Middlebury women’s basketball team. The Panthers clinched a winning record with the result.
Independent photo/Steve James

Assuming the Panthers get past Williams, Middlebury will be trying to put the finishing touches on its undefeated regular season during home games vs. Bowdoin this Friday and Saturday.

The Panthers, ranked No. 1 in NCAA Division III, have nailed down the top seed for the upcoming NESCAC playoffs and will host a quarterfinal on Feb. 27.

The weekend road split of two NESCAC games left the men’s basketball team with a 7-3 league mark, good for third place, to go with a 17-5 overall record.

On Saturday the Panthers pulled away from host Bates in the second half to prevail, 69-52. The Bobcats finished at 9-11, 2-8 in the league.

A tight first half ended with Middlebury up, 30-29. The game remained close, with Bates on top, 45-43, at the second half’s midpoint. The Panthers then went on a decisive 12-0 run, and the Bobcats came no closer than eight the rest of the way.

Dylan Thoerner paced four Jumbos in double figures with 19 points. The Panthers shot 38.2% from the floor, while Tufts hit on 47.4 percent. 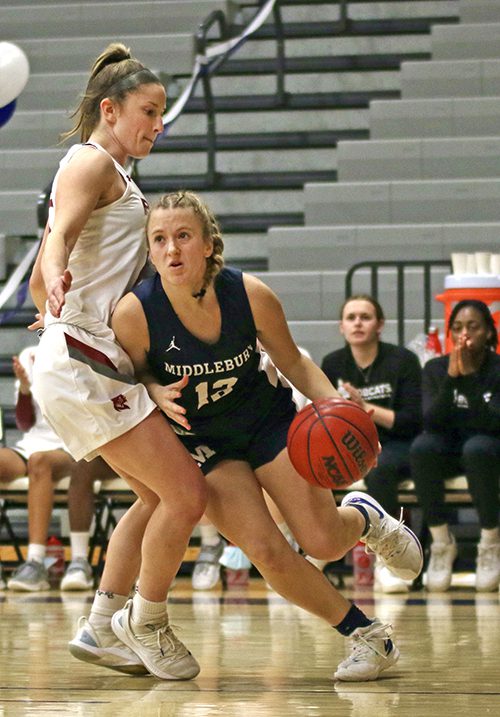 After splitting two home NESCAC games this weekend the Panthers finished the regular season at 12-10, 6-4 NESCAC; they earned the league’s No. 4 seed.

The game was tied at 70-70 with 2:17 left. Tufts then went up by three on a Sofia Rosa hoop and Maggie Russell free throw. Panther Alexa Mustafaj hit a free throw to make it 73-71 with 13 seconds left, but Jumbo Molly Ryan made four free throws to clinch the win.

Mustafaj, NESCAC’s leading scorer, tossed in 27 points to go along with three assists. Augusta Dixon added 14 points and a seven rebounds, and Emily Downer chipped in 11 points and six boards.

On Saturday the Panthers held off a late Bates rally to prevail, 63-55. Bates fell to 14-7 overall as well as ending with the same 6-4 NESCAC mark as Middlebury, but the Panthers owned the head-to-head tiebreaker.

Middlebury led, 23-6, early in the second quarter before the Bobcats worked back to make it 29-20 at the break.

The Panthers never trailed, but Bates closed to within 33-32 late in the third before points from Mustafaj and senior Michaela Sullivan gave the Panthers a 41-34 edge entering the fourth.

In the final period Mustafaj helped spark the Panthers to a 54-40 lead, but Bates’ press forced turnovers that twice pulled the Bobcats to within three points. Two baskets by Sullivan, one assisted by Musafaj, and three Mustafaj free throws helped secure the win.

The Panther defense held the Bobcats to 32% shooting from the floor, while Middlebury shot 41%.

Mustafaj scored 20 points, and her 449 points this winter put her fourth on the program’s single-season list. Sullivan netted 13, while Dixon scored 12. Brianna Gadaleta paced Bates with 20 points and 11 boards. 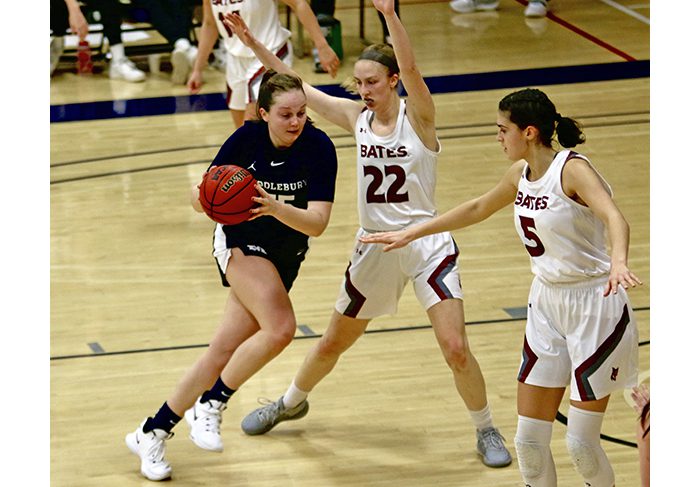 MICHAELA SULLIVAN, THE only senior on the Panther women’s basketball team, makes a move in the lane against visiting Bates on Saturday. Sullivan’s season-high 13 points included key contributions in the late going as Middlebury picked up a pivotal victory.
Independent photo/Steve James

On the men’s side, Holden Parazette led the Panther men by taking 18th in 1:41.

Of note: on Feb. 9 Panther sophomore Ali Nullmeyer finished 21st in the Olympic slalom while skiing for Canada.

On this past Saturday, Jin Lee’s hat trick propelled the Panthers past host Williams, 4-1. The Ephs dropped to 9-10, 9-7.

Lee’s first goal came in the first period on a break-in. Eph Jack Forrest equalized at 5:40 of the second period, and Paddy Bogart restored the Panther lead four minutes later on a rebound.

Lee made it a 3-1 at 13:52 of the third with an end-to-end rush, and then completed the hat trick with an empty-netter.

Middlebury goalie Jake Horoho made 35 saves for Middlebury, while Evan Ruschil made 23 for the Ephs.